A good part of the scholarship in Hispanofilipino literature revolves around one author and his two novels. 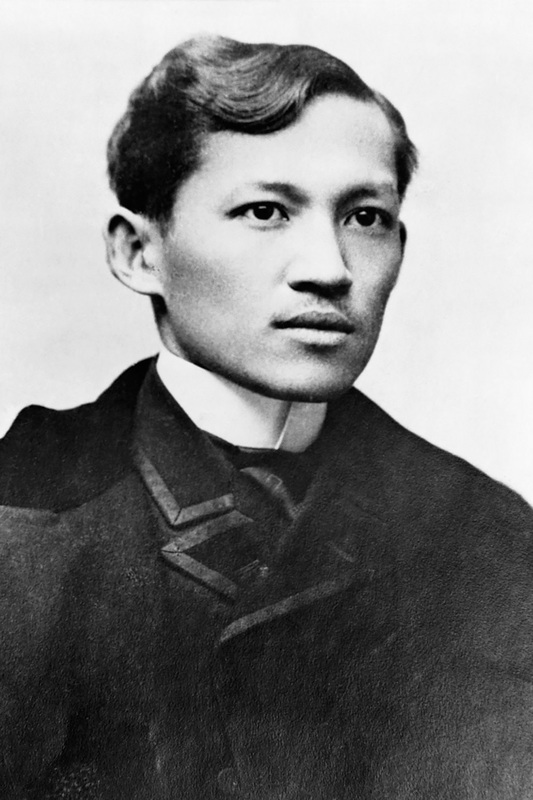 The intellectual, martyr, and national hero José Rizal–pictured above wearing a dark suit with a white collar in a closely framed photo–wrote the two foundational novels of the Filipino nation in Spanish.  These were the Noli me tángere (or Noli), first published in Berlin, Germany in 1887, and its sequel El filibusterismo (or Fili), which came out in Ghent, Belgium in 1891. The Noli and Fili are widely regarded as foundational novels because they distilled the failures and promises of an incipient Filipino national identity. The oldest copy of the Noli we have in the Worcester Philippine History Collection is the 1899 edition printed by the Manila-based publishing house Chofré y Compañía. We likewise have the 1909 edition published by Casa Maucci in Barcelona. As for the Fili, we have the Chofré edition from 1900. 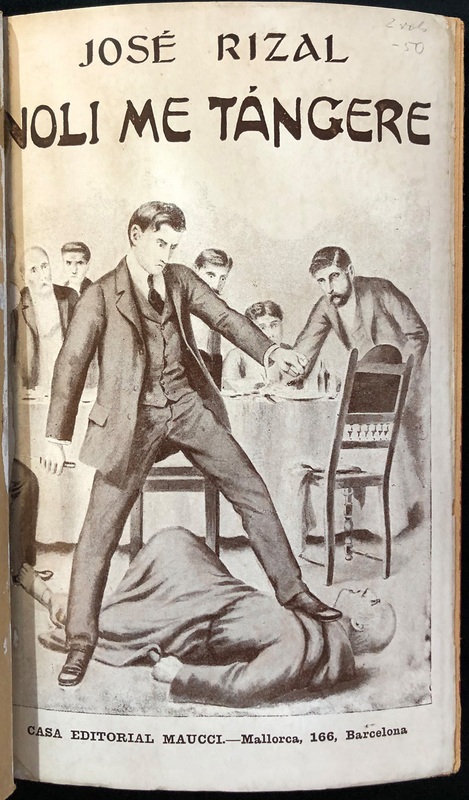 This illustration above from the cover of the 1961 edition of Noli me tángere depicts an iconic scene from the novel, where the protagonist Juan Crisóstomo Ibarra attacks Padre Dámaso after the Spanish priest taunts the memory of Ibarra’s dead father.

Rizal’s two novels are the most translated works in the Hispanofilipino canon. Since Spanish has never been spoken as a majority language in the Philippines, the only way for Filipino readers to understand the Noli and Fili was to read them in translation. The known oldest English-language translation of the Noli is An Eagle Flight, an adaptation published in 1900 in New York. We also have Charles Derbyshire’s The Social Cancer, first published in 1912, and a 1931 edition of Derbyshire’s translation of the Fili, titled The Reign of Greed. Other notable English-language translations of the Noli and Fili in U-M collections are León Ma. Guerrero’s The Lost Eden and The Subversive, Jorge Bocobo’s Noli me tangere, described as an “unexpurgated” translation, Camilo Osias’s El filibusterismo, Jovita Ventura Castro’s Noli me tángere and The Revolution, Soledad Lacson-Locsin’s Noli me tángere and Subversion, and Harold Augenbraum’s Touch Me Not  and El filibusterismo.

On the other hand, translations of the Noli in Philippine languages at U-M include Tagalog/Filipino by Pascual H. Poblete and by Benjamin de la Fuente, Hiligaynon by Ulpiano Vergara, Kapampangan by Pedro Manankil, and Cebuano by Juan Kijano. We also have the Chinese translation by Se Fen. The University of Wisconsin-Madison has the French translation by Henri Lucas and Ramón Sempau under the title Au pays des moines (In the Land of Monks). Despite their status as foundational novels, the Noli and Fili have not been translated to many other languages of the Philippines. Except for Filipino, which is the national language, and English, the co-official language, translations of Rizal’s novels in other Philippine languages are almost unheard of. The ones we do have are obsolete and hardly ever read. The nationalization of Rizal’s novels was ensconced in the bigger project of promoting a single national language and the concurrent (and perhaps unintended) minoritization of other Philippine languages. Before the educational reforms that adjusted Philippine education to a K-12 model, the Noli and Fili were offered in high schools as the literary component of the subject called “Filipino” in the last two years of high school.