Translation in the Philippines was intimately linked to the development of the printing press and the conversion of the colonized territory to Christianity. Since colonialism in the Philippines was largely justified by the Spanish Crown as a mission to spread Christianity in Asia, many publications were written by Catholic missionaries for the purpose of religious instruction. The oldest known print materials in the Spanish Philippines were translations of Christian writings into Tagalog and Chinese published around 1593 using engraved wooden blocks. These are the Doctrina christiana en lengua española y tagala (Christian Doctrine in Spanish and Tagalog Languages), the Bian zheng jiao zhen chuan shih lu (Testimony of the True Religion, or Shih Lu hereafter), and the Doctrina christiana en letra y lengua china (Christian Doctrine in the Chinese Language and Letters). It should come as no surprise that the first known publications in the Spanish Philippines included translations from and into Chinese. The Spanish Crown considered the Philippines as a point of entry for the Christianization of China.

The three texts were written by missionaries of the Order of Preachers, more popularly known as the Dominicans. Dominican motifs appear prominently on their title pages. In the Tagalog Doctrina, we see an image of the order’s founder, St. Dominic of Guzmán, donning the black and white habit of the order with the iconographic symbol of the lily, which stands for purity, and a star, which recalls the legend that Dominic’s godmother saw a bright light on his forehead when he was baptized. A tree and some buildings can be seen behind him. An ornate border surrounds the entire scene, and underneath it is written the title of the work in Spanish. In the Chinese Doctrina, whose title page also appears in Spanish, the Dominican coat of arms is emblazoned on the center of the page. The name of the Chinese printer, Keng Yong, is written underneath it. In the Shih Lu, we see an illustration of a Dominican friar wearing the characteristic black and white garments of his order as he presents a book to a Chinese official in front of him. Except for the words Este es el principio del libro (This is the beginning of the book) scribbled on top and Tassada en quatro reales (Priced at four reales) and Juan de Cuellar signed in the lower margin, the rest of the page is written in Chinese.

The Tagalog Doctrina is a compilation of prayers in Spanish and their translation to Tagalog, the major language in Manila and its environs. In the Doctrina passages above we see The Lord’s Prayer written in three forms: the Spanish version in the Latin alphabet from the lower part of the first picture extending to the second one, the Tagalog translation in the Roman script from the lower part of the second picture to the third one, and the same Tagalog translation but written this time around in the indigenous alphasyllabary called baybayin, from the third picture to the last. The only surviving copy of the Doctrina christiana is at the Lessing J. Rosenwald Collection of the US Library of Congress. In 1947 the US Library of Congress issued a rare facsimile edition with a critical introduction, a copy of which can be consulted locally at the U-M William L. Clements Library. 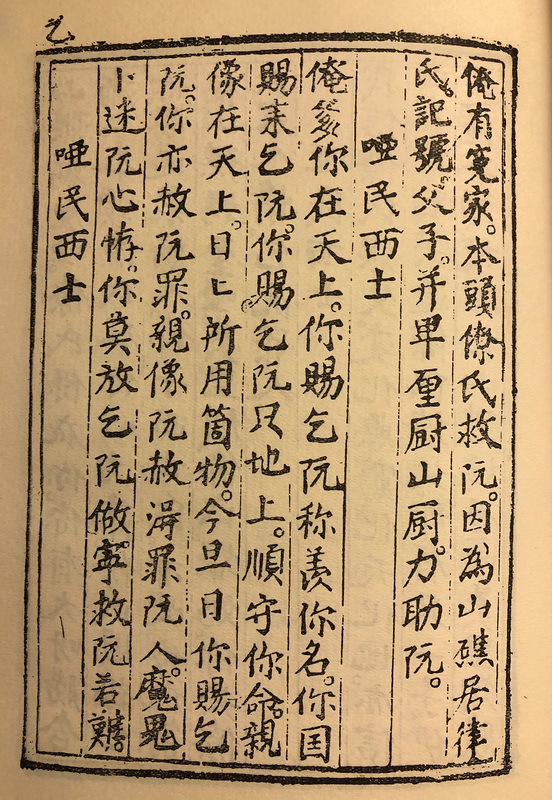 On the other hand, the only known copy of the Chinese Doctrina was discovered in the Vatican Library sometime in the 1940s. Different years of publication have been suggested for this undated text. Some say it may have been published around 1592 or 1593, while others speculate that it came out around 1605. A facsimile of the entire Chinese Doctrina (above) is included as an appendix in the book Primitivas relaciones de España con Asia y Oceanía (Spain’s Primitive Relations with Asia and Oceania) by Carlos Sanz. For the purpose of comparison, we have included a page from this text with the Chinese translation of The Lord’s Prayer. The prayer starts in the fourth column from the right and is six-columns long. The four characters on the last column (i.e., first column from the left) translates as "Amén Jesús." 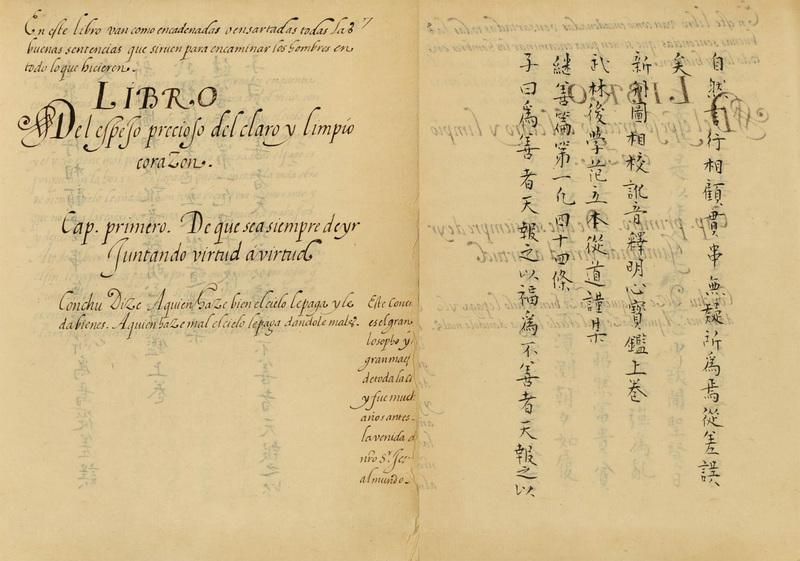 Finally, the Shih lu by Fray Juan Cobo was probably the first text written in Chinese by a European with the aim of introducing European scientific thought in Asia. Cobo was also responsible for the first translation of a Chinese text to a European language. Pictured above is the title page in Spanish and Chinese of the Espejo rico del claro corazón (Precious Mirror of the Clear and Pure Heart), a translation to Spanish of the Mingxin baojian, a collection of some 600 aphorisms first compiled by Fan Liben in 1393. This particular edition is bilingual, with the Spanish translation preceding the Chinese source text. The page in Spanish gives the complete title of translation and the first chapter. In the Chinese text, the first column on the right and the stray character in the second are a quotation from the preface, basically about making sure one's words and deeds are always aligned in order to avoid acting errantly. The third column specifies that this version is a new printing of a transliteration of the Mingxin baojian, with images and corrections from prior versions. The fourth column is about the author, Fan Liben. The fifth column specifies the first chapter (“Continuing Virtue”) and how many lines it contains (44). A quotation from the first chapter about Heaven repaying good actions with fortune follows.

The University of Michigan Library has several missionary grammars and dictionaries. In these materials, Philippine languages were “reduced” to grammatical rules according to the structures of Latin for the purpose of using them as instructional materials for priests involved in missionary work. The most notable pieces in our collection include an 1865 edition of the Arte de la lengua tagala (Art of the Tagalog Language) by Fray Sebastián de Totanés, which features a bilingual confession guide in Tagalog and Spanish, an 1860 edition of the Vocabulario de la lengua Pampanga (Vocabulary of the Pampango Language) by Fray Diego Bergaño, and a photocopy of the 1841 edition of the Diccionario de la lengua Bisaya Hiligueina y Haraya de la Isla de Panay (Dictionary of the Visayan Language of Hiligaynon and Haraya from the Island of Panay) by Fray Alonso de Méntrida. 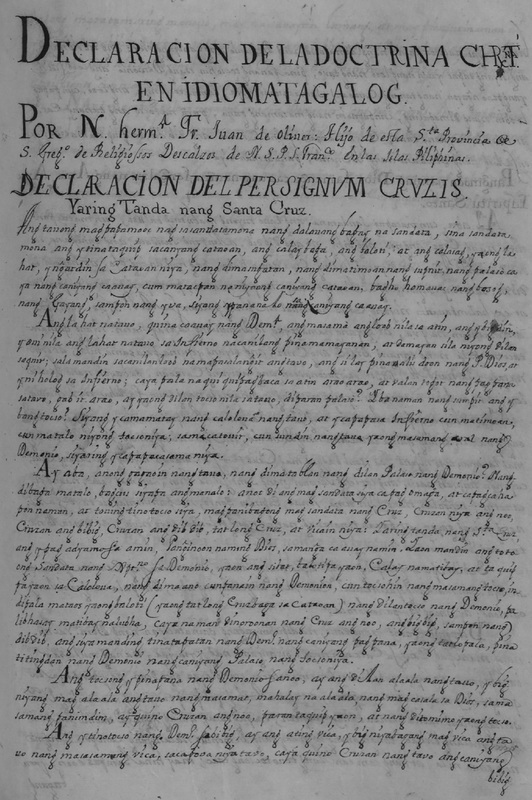 Other Midwestern archives hold exquisite pieces of missionary texts. For example, the manuscript of Fray Juan de Oliver’s Declaración de la doctrina christiana en idioma tagalog pictured above from the 1590s can be found in the deceptively nondescript Lot 527 in the Lilly Library of Indiana University. Oliver’s translation of the Christian Doctrine mostly consisted of catechetical explanations in Tagalog about some common prayers of the Catholic Church, such as this explanation on the opening page about the Sign of the Cross.

For its part, the Edward Ayer Collection of the Newberry Library in Chicago has the only surviving copy of Fray Francisco Blancas de San José’s Libro de las quatro postrimerías del hombre en lengua tagala, a 1734 reprint of a 1604 Tagalog translation of a classical Catholic text about the four last phases of human life.