In The Three Billy Goats Gruff, three goats trick a troll in order to cross a bridge to find greener pastures.

The first page of this edition depicts three billy goats, of varying sizes, walking up a hill and off of the page. A family (a man, woman, and young girl), wearing traditional Scandinavian clothing, watch them go, with buildings and mountains behind them.

The tale of The Three Billy Goats Gruff originates in Norwegian oral folklore and was first recorded by Norwegian scholars Peter Christen Asbjørnsen and Jørgen Engebretsen Moe. The two were inspired to collect local folktales and legends by the Brothers Grimm in Germany during a wave of Norwegian nationalism following Norway’s partial independence from Sweden. Their collection of folktales has been reprinted numerous times since its first appearance in 1841.

The Three Billy Goats Gruff, like many of the folktales collected by Asbjørnsen and Moe, is emblematic of Norse social and cultural contexts. The goats’ quest for greener grass, for example, is closely related to issues of famine times, and the historical exodus of Scandinavian “Vikings” in search of fertile land. This edition, illustrated by William Stobbs in 1967, pays homage to these Nordic origins. The hilly landscape that the goats travel across is indicative of Norway’s topography, while the buildings and the clothing of the three human figures depict traditional Scandinavian architecture and dress. The humans, who play no direct role in the story, serve only to emphasize the setting and remind the reader of the tale’s origins. 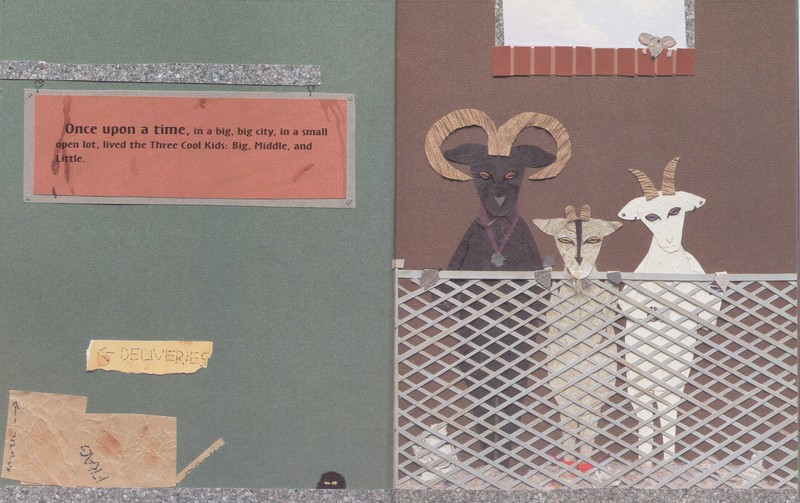 In this illustration, three goat kids are shown standing behind a metal fence on their back legs like humans. They stare soberly at the reader. The illustrations are collages created using torn pieces of paper.

In Three Cool Kids (1995), Rebecca Emberely uses distinctive cut-paper illustrations and an urban setting to create a modern adaptation of a famous folktale. Emberely’s use of overlaying paper cutouts in lieu of traditional drawings adds complexity and beauty. Textured paper is fashioned into the forms of each of the humanized goats whose look and personalities reflect a contemporary Big City: both in their virtually 3D accessories, and in their sibling banter.

Emberley’s decision to place the “kids” in an urban setting adds a new moral to the story. In the original tale, the antagonist troll is a mythical creature akin to giants and witches. The goats must overcome this supernatural obstacle. Emberly replaces this creature with a rat. Many modern readers will understand that the fear of moving residences is symbolized by the rat.

The goat “kids” must cross a sewer rather than a bridge, and their open meadow is a grassy lot between a salon and a recycling center. This urban adaptation may concern readers who are taking the story literally: how can three young goats survive in the big city? But readers who embrace this tale as a larger metaphor, they will be tickled by Little’s red paper tennis shoes and Middle’s silver bracelets as they tackle the challenge of moving and get past the rat.