A mother duck’s hatchlings tease and ridicule the Ugly Duckling because he does not resemble them. The Ugly Duckling wanders from farm to woods, believing that he is hideous. He eventually finds a flock of swans that willingly accept him. After looking at his reflection in the water, the Ugly Duckling learns that he has been a swan all along. 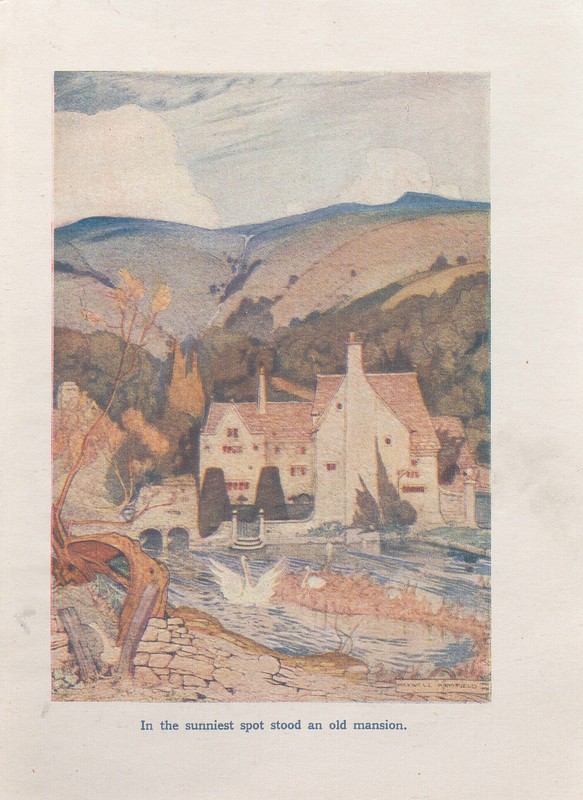 The illustration on display shows a scene from the middle of the tale, in which a swan spreads its wings as it rises from the water in front of an elaborate mansion.

This collection includes several of Hans Christian Andersen, including The Ugly Duckling. This story is considered a literary fairytale because it is not based on any prior folklore, but it does include motifs from folklore-derived works such as the Aesop’s The Fox and the Leopard, in which the Leopard is scolded for stressing the importance of physical beauty. Andersen thought of the story as an autobiography because like the duckling he was considered unattractive, and faced many hardships before attaining success.

The main takeaways from the tale are that beauty is in the eye of the beholder and that differences should be celebrated. Instead of directly stating a moral, the story includes a simplistic drawing before the title of a crowned swan, alluding to the treatment of the duckling at the end of the story.

The sole illustration representing this story in this collection of tales, focuses little on the actual plot. The depiction of an elaborate castle or mansion with small swans in the foreground, alludes to the end of the story, and perhaps suggests that when the Ugly Duckling comes to look like a swan he is treated like royalty. 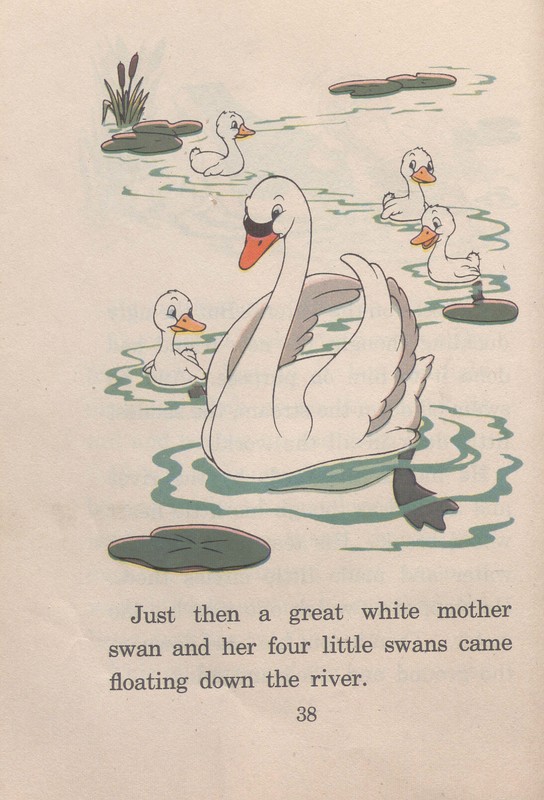 In the illustration above, a mother swan is swimming in a lake looking at the baby swan next to her, with three other baby swans trailing behind their mother in the water. The white swans are surrounded by green lily pads and blue ripples meant to depict water.

This version of The Ugly Duckling was adapted from Hans Christian Andersen’s original by prolific mid-20th century children’s author, Margaret Wise Brown. The Ugly Duckling is one of many stories within the book, Little Pig’s Picnic and Other Stories, and its role is diminished by not being the title story or included in the cover illustrations and by being placed around the middle of the book.

This book was made in collaboration with Walt Disney Productions and its illustrations are reminiscent of the standard, simplistic Disney Style of the time period. On the cover is an illustration of the iconic Disney character Pluto. All of the illustrations match the style of Pluto seen on the cover. Disney has a history of adapting and changing works by Hans Christian Andersen, such as The Little Mermaid, and this edition is no different. It has been simplified greatly for the child audience of the mid-20th century. One such change is the simplification of the language, more specifically the addition of onomatopoeia throughout the entire story, inserted so as to entertain children who may be listening to the story read by their parents. Another change is the complete removal of all human characters. In the original, humans play a vital role in the story and discover that The Ugly Duckling is in fact a swan, but, in this version, all of the characters are animals, even the inanimate wooden duck.