During the summer, Ant works diligently to store up food while Grasshopper sings. In the winter, Grasshopper suffers from hunger and asks Ant for food. Ant admonishes Grasshopper for singing and not working over the summer and refuses to share food. 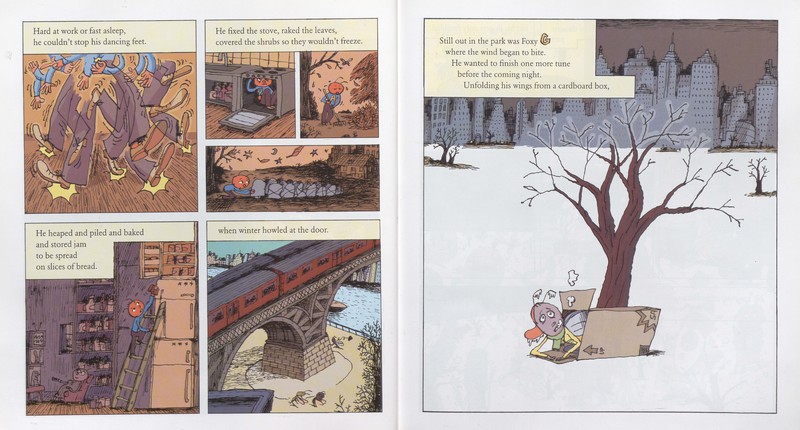 Several comic panels are included in this pagespread. On the left is Kid A (ant). In one comic panel box, Kid A is dancing while he works. Then Kid A is cleaning an oven. Finally he’s pushing cans into a cupboard while on a ladder. On the right is one large panel depicting Foxy G (grasshopper). He is laying in a box in the snow under a dead tree.

Toni and Slade Morrison’s Who’s Got Game?: The Ant or The Grasshopper, with illustrations by Pascal Lamaitre, is a contemporary picture book adaptation of the Aesop fable The Ant and The Grasshopper. Originally published in 2004, this was one of three adaptations that the Morrisons and Lamaitre endeavored to take on. Their goal throughout the whole of their work with Aesop was centered around their belief that Aesop’s fables were open for reinvention.

The Lamaitre adaptation highlights, constantly, that behind hard working Kid A, is Kid A’s mother, sitting content in her recliner watching three televisions simultaneously while her child labors. This image reflects a blatantly stressful life that a child like Kid A leads.

Meanwhile, Lamaitre depicts a homeless, struggling, parentless child figure (Foxy G) in a box in the middle of winter.

The Tortoise and the Hare