In Puss-in-Boots, the miller’s youngest son receives a clever cat as his inheritance. The cat, Puss-in-Boots, uses his wits to gather both wealth and the hand of a princess for his owner. 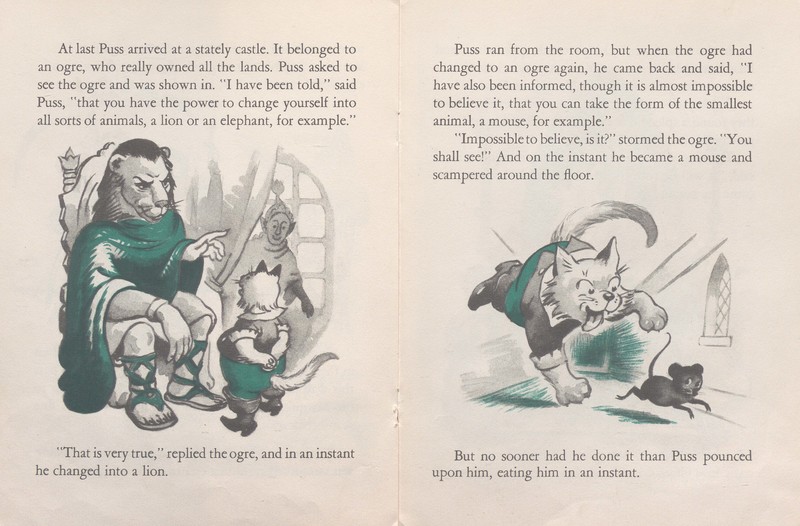 On the left side of this pagespread, Puss-in-Boots is pictured talking to an ogre in the form of a lion, who is dressed elegantly and sitting on his throne. On the right side, the ogre is shown transformed into a mouse, which Puss is now chasing.

Puss-in-Boots is a well-known trickster fairytale that has been in circulation for hundreds of years, with many different translations and editions. This 1949 edition closely follows the plotline of Charles Perrault’s The Master Cat (1697). By dressing himself in human clothing, Puss transforms into a human-like character, employing language as a form of deception to help his master acquire a fortune— taking on the roles of a trickster figure and animal helper in a rags-to-riches tale.

This pagespread illustrates the climax of the story, in which Puss cleverly tricks the ogre into transforming into a mouse—which he then eats in order to secure the castle for his master. This shapeshifting ogre takes on a role similar to the ogre-troll commonly seen in folklore narratives. He exists primarily to further the narrative arc of Puss’s wit.

One of the defining features of this edition is its interactive quality. Julien Wehr, an artist and illustrator, designed sliding tabs that allow readers to move and manipulate his drawings. He patented this design in 1938 as “moving illustrations” and went on to create his first edition of Puss in Boots Animated in 1944. This 1949 edition is simple in color and design compared to many earlier illustrators’ interpretations. Most of the illustrations are black-and-white outlines with overlays of reds and greens, which often accentuate the clothing, alluding to the significance of appearance and class. 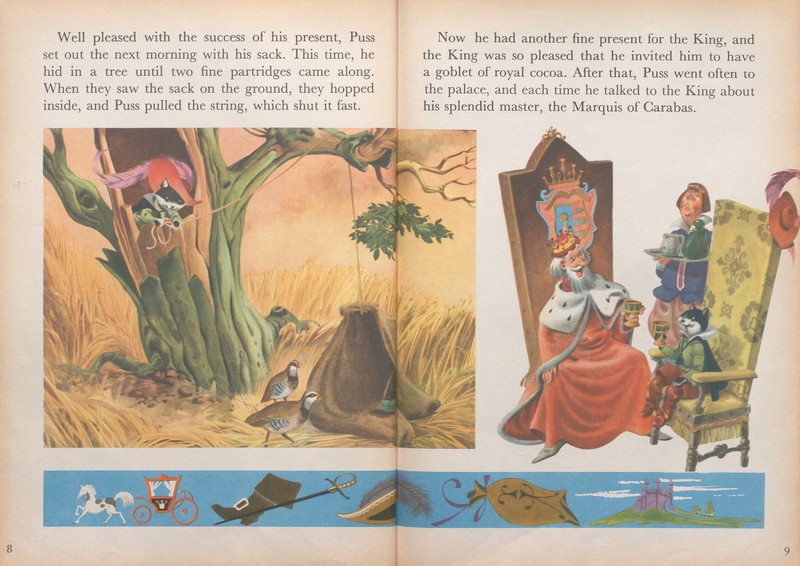 In this image, we see Puss perched in a tree. He is holding onto a string and at the other end is a sack, which he is using to trap partridges. In the next image, he is laughing with the King while seated on a chair, as if equals.

Puss-in-Boots is a classic tale in which an animal trickster provides for his master. These richly colored illustrations, created by Italian illustrator Antonio Lupatelli, evoke the lavish lifestyle that Puss is acquiring for his master through his tricks. This 1963 edition draws on Charles Perrault’s 1697 version, the first to put boots on Puss.

This is a story of class mobility, or rags to riches. This edition’s title page describes how clever Puss only needs boots and a sack to make a fortune. Puss begins as a naked cat, but here we can see a clothed Puss approaching the king with an offering and being treated as an equal. This edition’s illustrations portray Puss as if he is a powerful human, with scenes of Puss riding a horse, intimidating peasants who lean away in fear, and approaching the king. In the end he manages to secure wealth for himself and his master, as seen by his luxurious clothes. It is easy to imagine how this originally Italian tale is appealing to an American audience. In this world, anyone (even a pet cat) can use their wits and creativity to rise to a higher class, a classically American idea.