The beautiful daughter of a poor man agrees to leave home with a great white bear so that her family can receive riches. She learns that the white bear is a cursed prince, who takes the shape of a bear during the day and a man at night. After a long journey and several trials, the daughter breaks the enchantment that was laid on the prince.

East of the Sun and West of the Moon: Old Tales from the North (1914). Peter C. Asbjørnsen (author). Kay Nielsen (illustrator) 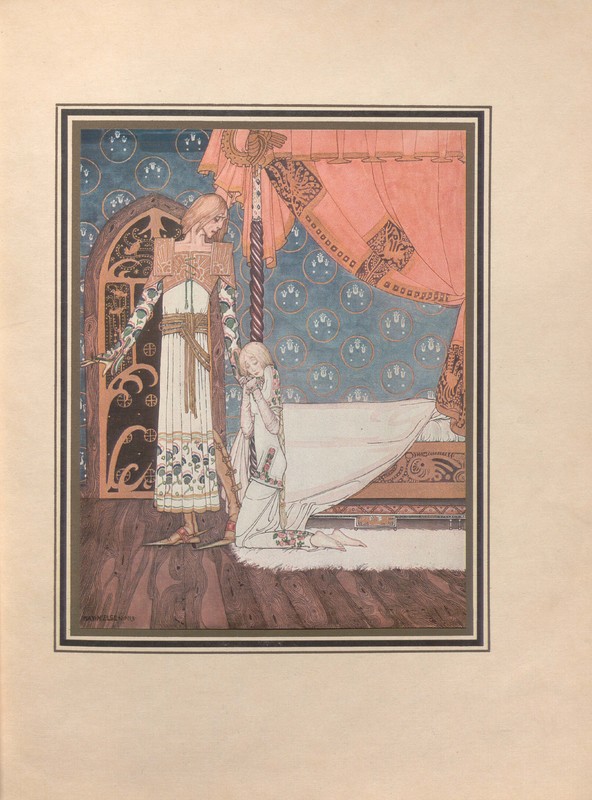 East of the Sun and West of the Moon: Old Tales from the North (1914). Peter C. Asbjørnsen (author). Kay Nielsen (illustrator).

The illustration is of a richly colored bedroom with a pale couple garbed in white in the forefront as the lass kneels before the now-human prince, clasping his hand to her cheek. A leaf of thin paper overlays the illustration with the text “Tell me the way, then.” she said, “and I’ll search you out.”

Nielsen’s illustrated version of East of the Sun West of the Moon: Old Tales from the Norse (ESWM) is nestled within a collection of other Norwegian fairy tales. ESWM is a version of the animal husband story, a subtype of fairy tales, which includes notable works such as Beauty and the Beast. Nielsen’s remarkable illustrations in ESWM launched him into success during a period in the late 19th century and the early 20th century known as the Golden Age of Book Illustration. His illustrations are hauntingly beautiful, inspired by Asian artwork with a unique Nordic elegance.

The Golden Age of Book Illustration was set in motion due to advances in printing techniques, so intricately illustrated books could be published in an economical manner. The Industrial Revolution spurred on these advancements and led to a growing middle class that were able to purchase books for the entertainment of children in the 19th and early 20th century. Ironically, children were also put to work during this time periodin order to publish books for children. Nielsen’s contributions to book illustration were hugely influential in how we view children’s literature, and they continue to be riveting works.

East of the Sun & West of the Moon (1980). Mercer Mayer (author and illustrator) 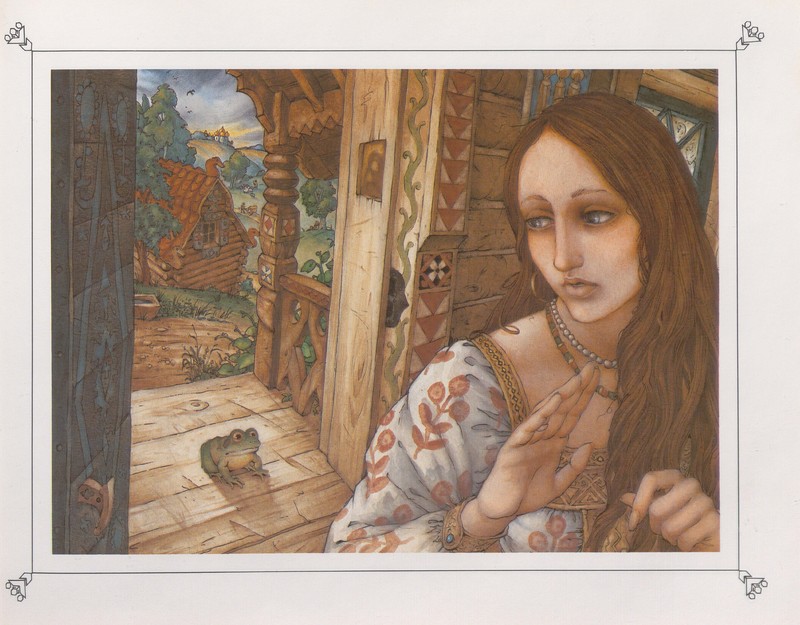 This illustration depicts a frog on a young girl’s front porch, staring up at the girl as she turns away from it. This picture is meant to represent the frog asking the young girl to be his bride and her declining out of disgust.

Mercer Mayer published his version of the Norwegian story East of the Sun & West of the Moon (ESWM) in 1980, two years after his wife at the time published her version of Beauty and the Beast, featuring his illustrations. It’s clear that Mayer took inspiration from various versions of Beauty and the Beast when writing this short story, and other animal huband tales such as the Brothers Grimm story The Frog King. In most editions of ESWM, the young girl is convinced to go live with a large white bear. The bear eventually turns into a handsome prince and returns to his kingdom, where she must find him. The bear is not present in this version and is instead replaced by a frog. In fact, the beginning of this story leading up to the young girl’s journey to the kingdom is nearly identical to The Frog King. Although some critics believe that Mayer overcomplicated this story, I appreciate the different versions of Beauty and the Beast that he incorporated and the ways he twisted the tale to make it his own.