A donkey, dog, cat, and rooster learn that they are no longer wanted on their farms and run away together.  After deciding to go to Bremen to become musicians, they come upon a cottage with four robbers inside. They make an awful noise to scare away the robbers and then give up their travel plans to settle in the cottage. 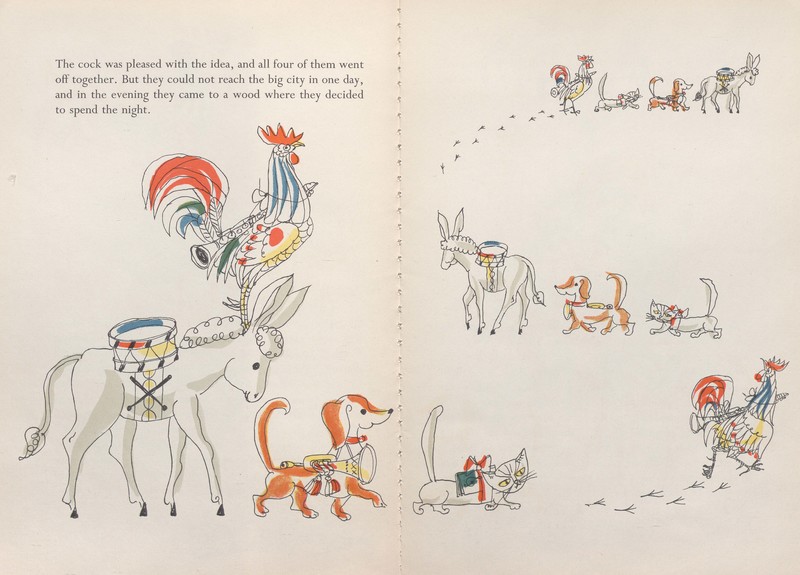 This illustration shows four animals walking in procession, carrying their instruments on their backs. They walk in an easy-going manner, and are colored with vibrant shades of red, orange, yellow, green, and blue.

This 1955 edition of the Brothers Grimm’s classic fairy tale, the “Town Musicians of Bremen” (1819), brings an unlikely twist to a familiar tale through the artistic choices made by the illustrator. Swiss artist Hans Fischer (1909-1958), a prominent figure in the Jugendstil artistic movement popularized during the turn of the twentieth century, uses color, movement, and abstraction to make his weak and elderly subjects appear vibrant instead.

The animals’ ages are arguably the source of the story’s tragedy, the reason they are forced to leave home. Yet, Fischer’s unexpected approach to illustrating them calls readers to reconsider how they think about aging. In Western contexts, old age is seen as something bleak and unfortunate. Fischer’s animals, though, are joyous, especially in this image, which displays the four animals blissfully marching. They are so heavily abstracted that it is nearly impossible to identify them as elderly. And their instruments don’t weigh them down; in fact, they float, making their way from the bottom to the top of the page. The vibrant colors Fischer uses to illustrate the animals speak to their playfulness and vitality, a choice that becomes all the more moving when the social and political turmoil characterizing Europe at the time is taken into account. In spite of a tumultuous and unforgiving world, Fischer refuses to surrender to it, instead opting to paint his world with a childlike sense of joy, wonder, and possibility. 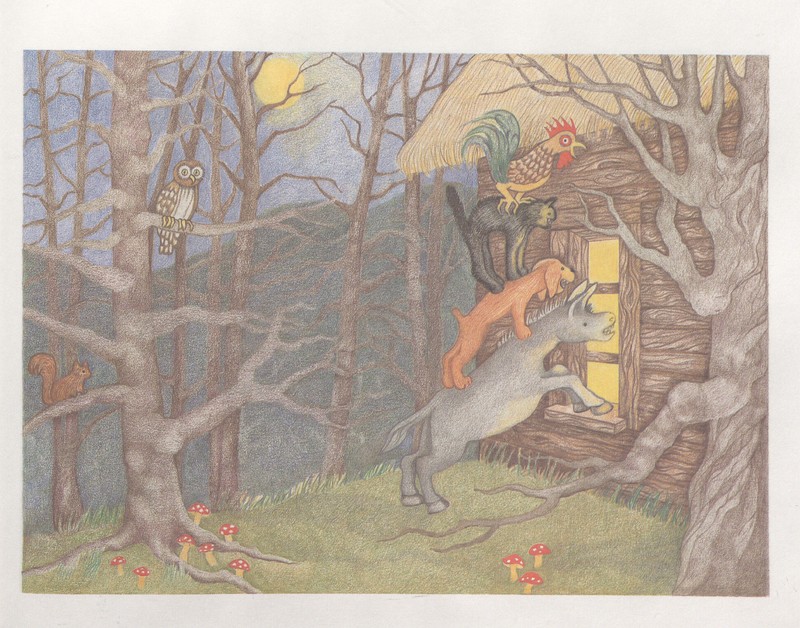 In this illustration, the Bremen Town Musicians look into the lit window of the robber’s hideout with a squirrel and an owl watching from a tree behind them.

A story that bucks fatalism with a humorous twist, The Bremen Town Musicians is a relatively obscure story. While not as well-known today as other Grimm fairy tales, the Bremen Town Musicians imparts a valuable lesson in resilience and refusing to stay down when others put you down. The illustrations by Ilse Plume led to the book receiving the Caldecott Honor in 1981. She retells the story of four abandoned, elderly animals that hit the road in order to find more lucrative work in town.

Plume tones down the expressions of the four animals and the humans, emphasizing the bigger picture as opposed to the individual characters. The faces of the animals in the story are physically small, emphasizing the journey of the animal escapees rather than their emotions. The use of muted shading blends the animals into the setting, especially the donkey whose grey coat almost matches that of the grey trees. This encourages the reader to take in all the details in the background.

As the animals look into the robber’s hideout, their human expressions come to the fore. The anthropomorphism allows the reader to inject a sense of risk unique to humans in their actions. Coupled with their animalness and use of subtle shading, Plume weaves even more rebellious subtext into this story of animals getting the better of their masters.

Goldilocks and the Three Bears