The Tortoise and the Hare

Slow and steady Tortoise is mocked by swift, arrogant Hare and challenges Hare to a race.  Easily outpacing Tortoise early in the race, Hare takes a nap and wakes to find that Tortoise has won the race. 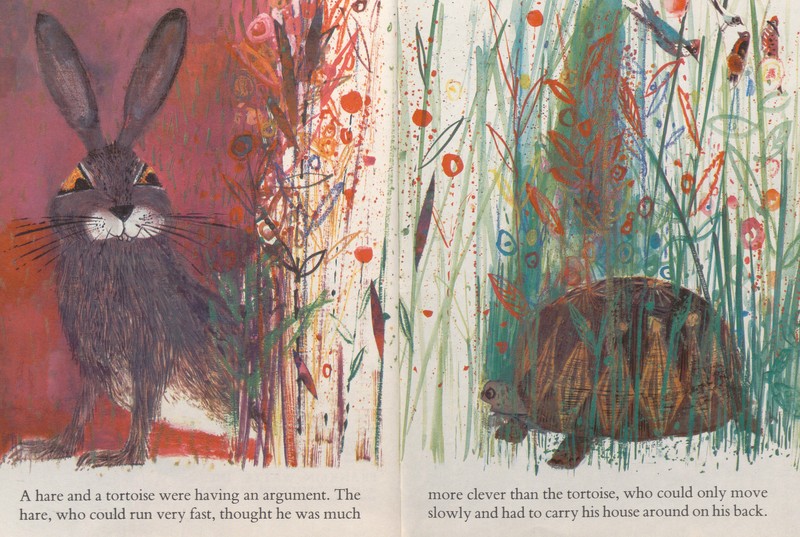 In this illustration, a rabbit is perched in a background of red, near a tortoise situated in grass. The Hare and the Tortoise, written and illustrated by Brian Wildsmith and published in 1966, integrates abstract art and bright color into a classic tale. Wildsmith’s background as a fine artist granted him a special perspective on the construction of entertaining and unique stories. Specifically, Wildsmith presents children with Expressionist versions of well-known stories, such as Aesop’s Fables.

Wildsmith’s whimsical painting style emulates the abstract art that was popular in England during the late 1950s and early 1960s. The technique aimed to engage viewers by defying the norms of texture and color. Throughout his rendition of the story, Wildsmith employs these illustration techniques to motivate the plot. Although the tale Wildsmith tells is quite short, he chooses to stretch the lines of text with a detailed and grand image to inspire the curiosity and unique interpretation of the reader. On one page, Wildsmith places the haughty rabbit on a backdrop of fierce and striking red to illuminate this character as the bad-tempered antagonist. This contrasts the natural and calming brush that the tortoise is situated within. By placing these two characters in opposing settings within one page fold, Wildsmith implicitly illuminates the dichotomy of these contestants, which highlights the central plot of the fable. Ultimately, Wildsmith’s images, coupled with this well-known story, help to manufacture a novel and playful experience for all readers.

The illustration on display depicts a scene from a Korean folktale of the Tortoise swimming with the Hare on his shell to the Sea Kingdom. This multicultural rendition of The Hare and the Tortoise by William de Bouis Peñe and Lee Po includes two classic stories from different geographic locations. The classic Aesop's Fable and the Korean folklore version of Byeol Ju Bu Jeon are formatted in a bilingual experience for English and Spanish audiences.

Lee Po narrates the tale of Byeol Ju Bu Jeon, a Korean story centered around class tension between peasants and royalty. The tale originated from the Korean genre of pansori, traditional oral storytelling involving a singer and a drummer. In the tale, the Tortoise lures the Hare into the sea to steal his liver to save the Queen. The image above depicts the Tortoise swimming with the Hare on his shell to the Sea Kingdom, where an anxious underwater community awaits the remedy for their Queen. Each character employs trickster qualities to persuade and deceive the other. The moral centers around the peasant class overcoming the aristocracy by fooling them through quick cunning thinking.