As the V.O.C. expanded their reach around the globe, at home the demand for maps with the most accurate and up to date information was on the rise. The Hondius and Blaeu publishing houses led the charge to meet this rising demand. Both firms supplied the V.O.C. with maps, and yet it was not until the 1630's that the infamous rivalry, rooted in the feud between Willem Blaeu and Johannes Janssonius, formed between the Hondius and Blaeu families.

It is impossible to say exactly when their dispute began, but as early as 1608 Blaeu penned a letter of complaint to the States of Holland and West Friesland against Johannes Janssonius. His letter claimed a loss of income due to the fact that Janssonius’s 1611 world map bore a striking resemblance to Blaeu’s own 1605 world map (Brotton, 276). By 1618 Johannes Janssonius moved into the shop next door to Blaeu, and the feud only worsened with accusations on both sides of stolen information and copied works (van der Krogt, 25). In 17th century Amsterdam copyright did not exist the way it does now. Instead, the courts would issue a print privilege, which prohibited texts and prints from being copied for a specified number of years. A print privilege would be granted to a printer, which would protect their work until the expiration. In 1620 Johannes Janssonius copied Blaeu’s Light of Navigation, a marine atlas. Unfortunately for Blaeu, his print privilege for this work had recently expired. The only way that he could fight Janssonius’s plagiarism was to produce a new edition, which would have cost Blaeu greatly (Brotton, 276).

The latter half of 1629 brought Blaeu an unforeseen opportunity to strike back at Janssonius and his business partner, Henricus Hondius. Prior to this, the Hondius family held the monopoly on the production of atlases in Amsterdam. Jodocus Hondius Jr. and Henricus Hondius had continued the publication of their father’s famed Mercator-Hondius Atlas. However, during the 1620's the Hondius brothers fell out and went their separate ways, establishing competing businesses. Jodocus Hondius Jr. began work on a new atlas, complete with new copper plates never seen before. Hondius Jr.’s unexpected death in August 1629 granted Blaeu the opportunity to acquire the plates from Hondius’s widow, and providing Blaeu with an exclusive entre into the atlas market. The following year Blaeu’s Atlas Appendix was published with Hondius’s name replaced with Blaeu’s own and without any acknowledgement of where he had acquired the maps.

The acquisition of the plates was a striking blow for Henricus Hondius and Johannes Janssonius and sparked a bitter rivalry between the publishing houses that would last into the 18th century. Angered by the sale, on March 2, 1630, Henricus Hondius and Johannes Janssonius made a contract with the engravers, Salomon Rogiers and Evert Hamsersvelt, who worked with Hondius Jr. to engrave the original plates. The contract stipulated that “these 36 copper plates should be ready within eighteen months, should be accurate, finer and better than the maps given to the engravers” (Swaen.com). Throughout the latter half of the 17th century, the Hondius-Janssonius and Blaeu publishing houses were locked in a race to produce the most accurate and complete atlas. The competition to produce a multi-part atlas like this had never before been seen in the publishing world. Each family was investing extensive funds in commissioning new copper plates, trying to compile the newest maps into a complete atlas.  It was a highly risky venture and costly investment for both firms. However, this race led to the creation of what many consider to be “the greatest and finest atlas ever published” in the form of the Blaeu Atlas Maior, composed of eleven volumes and 594 maps (Brotton, 265). It is even possible to question whether such a feat would have been created without the competition between the Hondius-Jansson and Blaeu publishing houses. 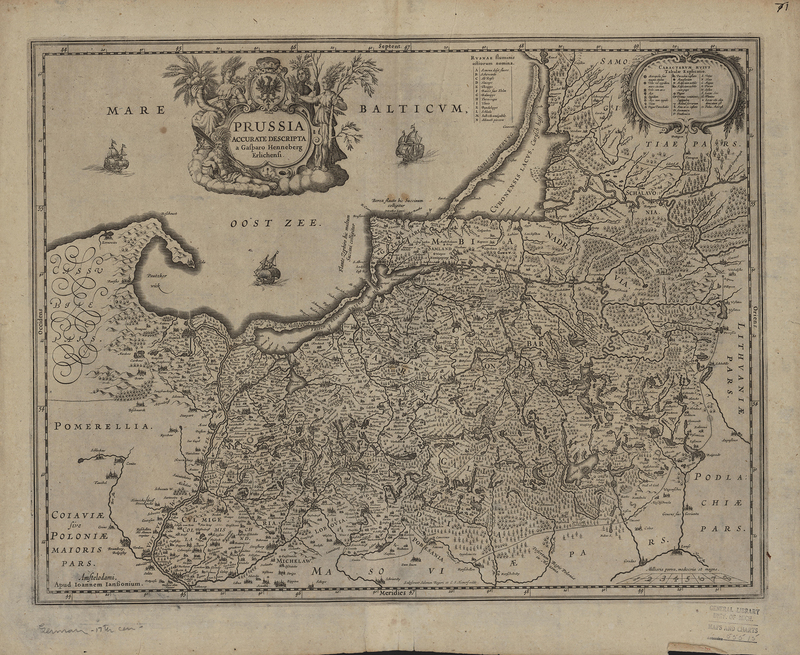 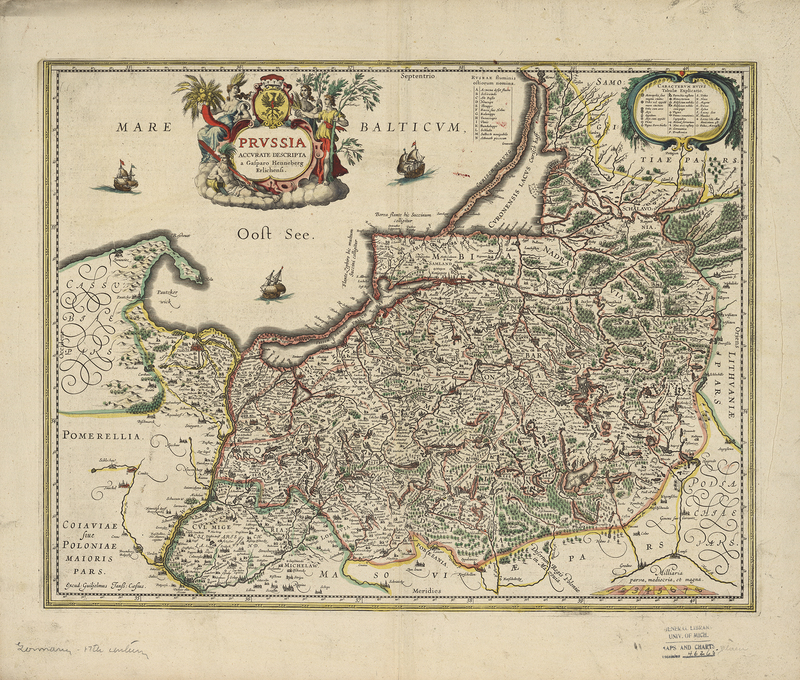 This is Blaeu's map of Prussia, which was produced from Jodocus Hondius Jr.'s original plate.

Brotton, Jerry. A History of the World in Twelve Maps. London : Penguin Group, 2012.

Swaen, Paulus. “A RARE COLLECTION OF MAPS PRODUCED AT THE BEGINNING OF THE RIVALRY BETWEEN THE HOUSES OF BLAEU AND HONDIUS.” Paulus Swaen Auction & Gallery, 18 Dec. 2018, www.swaen.com/jodocus-hondius-1629.php.