Explorers: The Influence of Travel

Travel for the sake of exploration had significant influence on European states from the 13th to the 17th centuries. Such exploratory travel served a variety of purposes and was undertaken by a significant number of people. Some hoped for new territory, others anticipated undiscovered natural resources while still others wanted trade routes with Asia or the Americas. Many explorers were backed by monarchs and wealthy patrons, while others were self-financed in the hope of earning fame, fortune, and adventure.

Whatever their motives or goals, explorers and their travels were influential in their home countries. Personal narratives of travelers’ exploratory voyages written in and around the Renaissance became popular among people who had never had the opportunity to travel. These accounts of far-off places were interesting to read, but not always accurate. Because the audience of such travel narratives had not been to the places described, the authors frequently enhanced or exaggerated experiences to make them more interesting. What resulted was a series of fantastical descriptions that were interesting to read, but not genuine. Narratives that did accurately describe voyages of exploration were not as widely read.

While enhanced accounts deluded the general public about the true nature of European explorers’ travels, information brought back by travelers to scientists, geographers, and governors had significant influence on foreign policy decisions, maps and technological innovations of the time. The need to chart the position of ships in open water on long exploratory voyages led to the invention and perfection of the sextant and the chronometer, as well as other navigational tools. Furthermore, it was these travelers who did reconnaissance for European monarchs hoping to expand their empires. Monarchs asked explorers and travelers who had knowledge of the territory they wanted to exploit for advice about how to proceed.

Perhaps the most important outcome of such travel for exploration was the expansion of geographic knowledge and the revision of maps of the period. Before the Age of Exploration, medieval Europeans had an incomplete view of the world. As a direct result of the travels of several explorers, including Marco Polo, Ferdinand Magellan and James Cook, European maps began to incorporate somewhat more accurate interpretations of Asia and Africa as well as places entirely new to European maps such as the Americas and Pacific Islands. Such travel led to the so-called Columbian Exchange, during which animals, plants, diseases, human populations, and ideas began to circulate between the Eastern and Western Hemispheres. 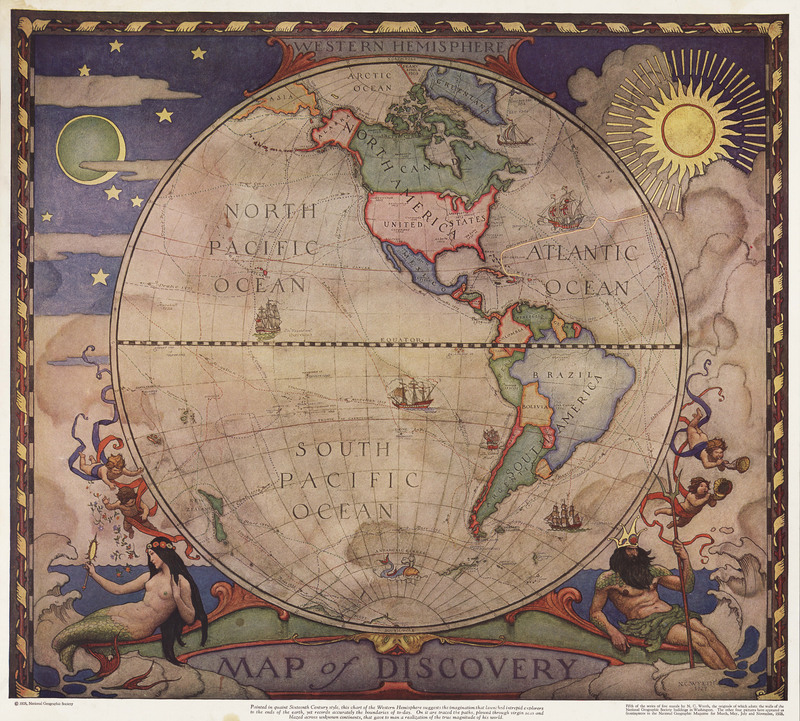 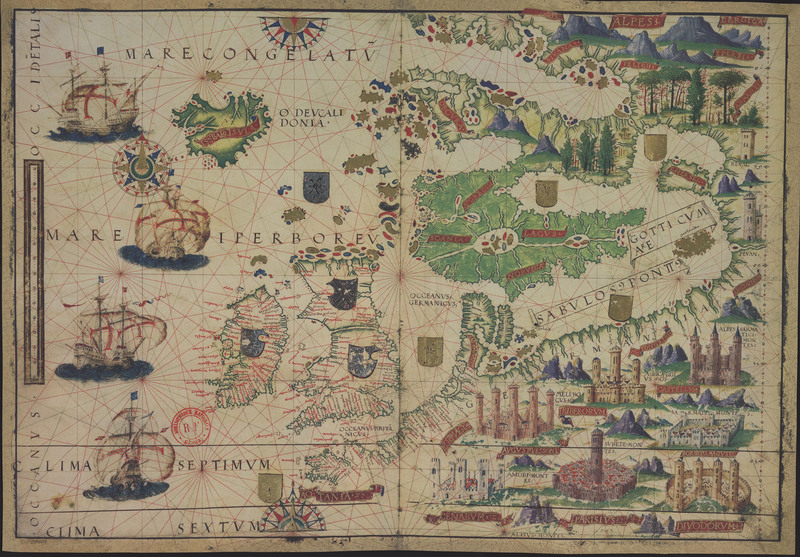 Captain James Cook is one of the foremost figures in the history of navigation and exploration. He mapped much of the vast territory he explored in his three voyages, paving the way for others to travel. During his first voyage, (1768-1771) Cook circumnavigated the islands of New Zealand and mapped them with incredible accuracy. His second voyage (1772-1775) also advanced the European body of geographic knowledge by disproving the existence of a large southern continent sometimes called Terra Australis. Cook’s third and final voyage (1776-1779), a search for the Northwest Passage, was responsible for charting the majority of the western coast of North America up to the Bering Strait. Although the famous captain did not return home from his final journey, he paved the way for many explorers and travelers to follow in his footsteps. He pioneered the accurate cataloguing of a variety of data including the use of longitude and latitude to effectively plot courses and make maps. 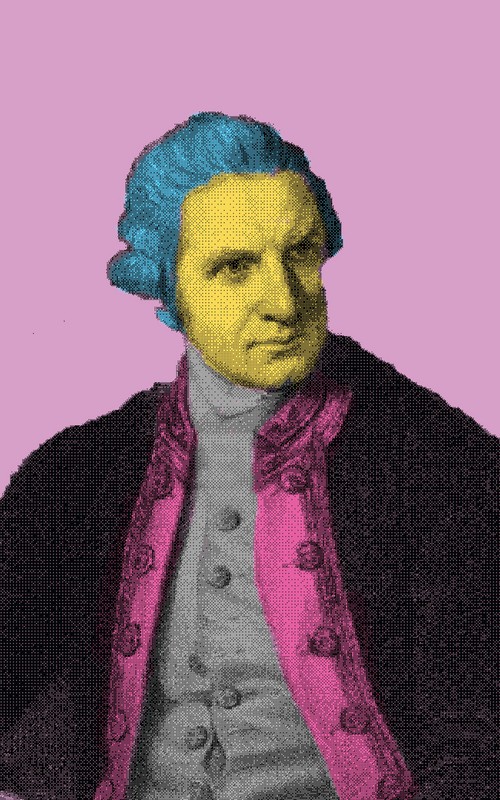 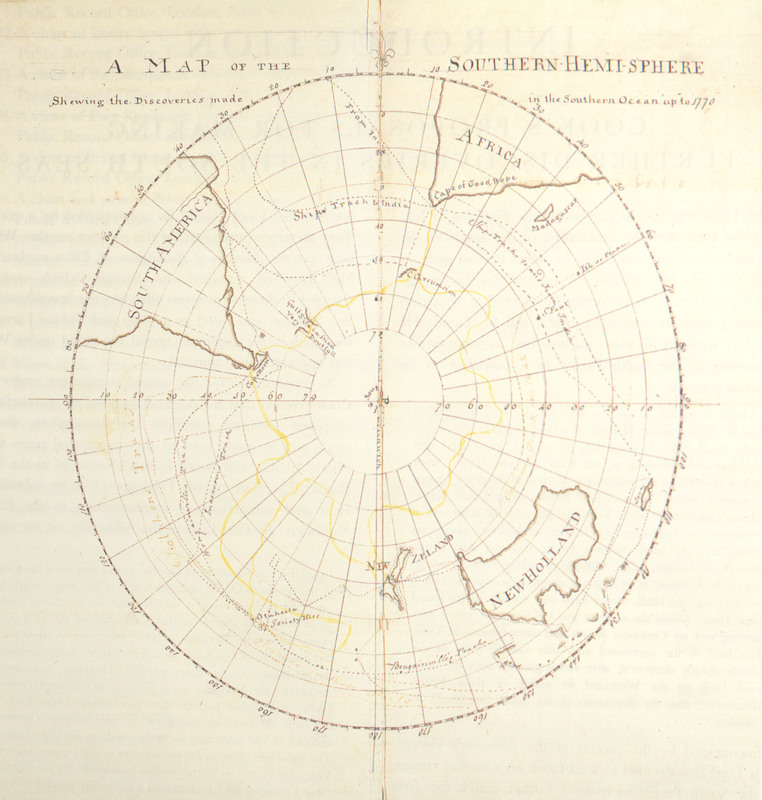 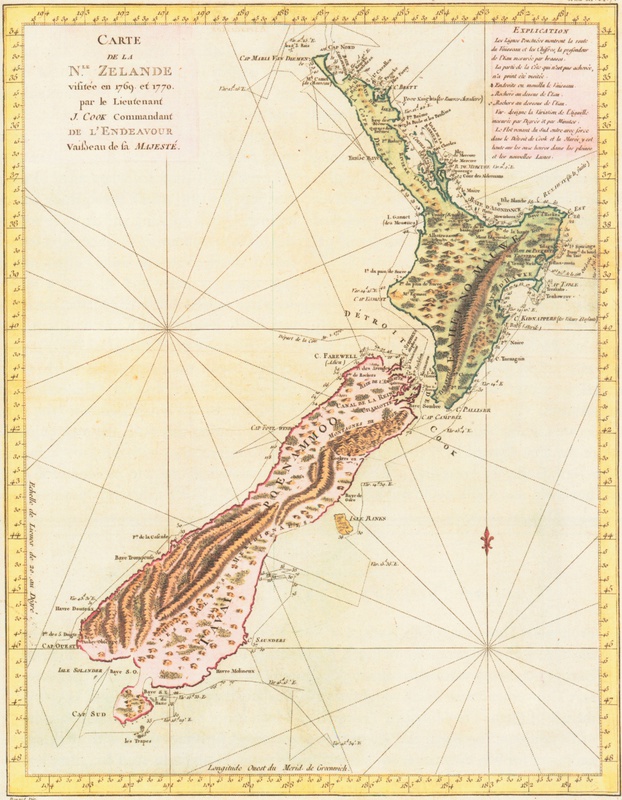 Ferdinand Magellan was a Portuguese sailor who completed the first circumnavigation of the earth. In 1519 he set out from Spain under the auspices of King Charles I to search for a new water route to the so-called Spice Islands. His record-setting travels have left a significant legacy. The strait that separates South America from Antarctica bears Magellan’s name, and his designation of “Mare Pacificum,” or peaceful sea, is immortalized as the Pacific Ocean. Magellan and his crew first established and explained the need for an International Date Line, and were the first Europeans to visit many islands in the South Pacific including the Marianas and the Philippines. 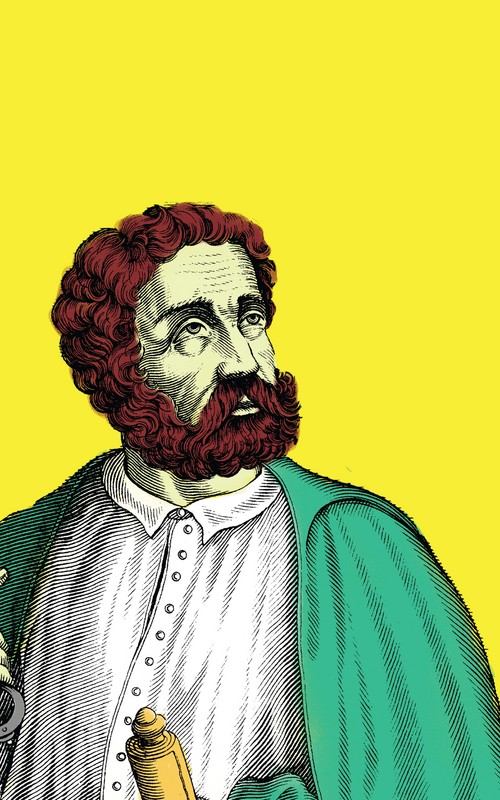 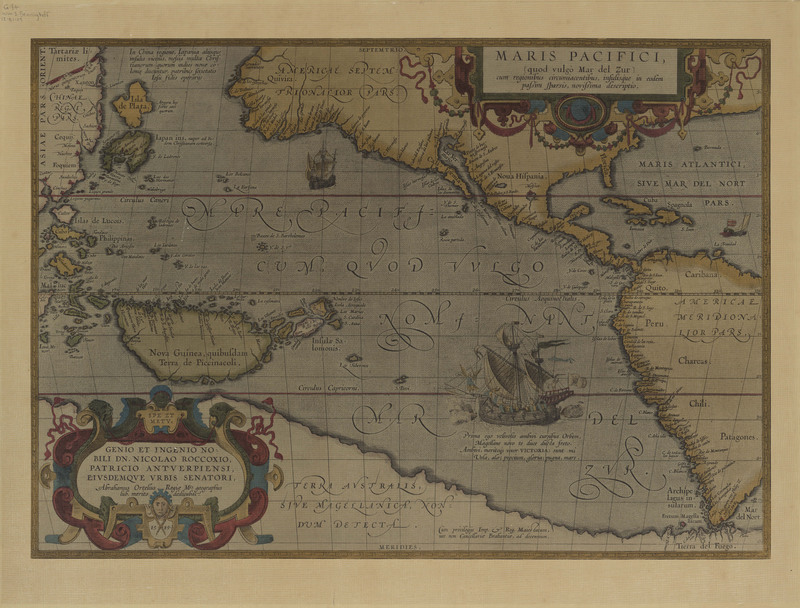 Ortelius includes a prominent illustration of Magellan’s ship the Victoria on his map of the Pacific. It was in this vessel that Magellan’s crew completed the first circumnavigation of the Earth. 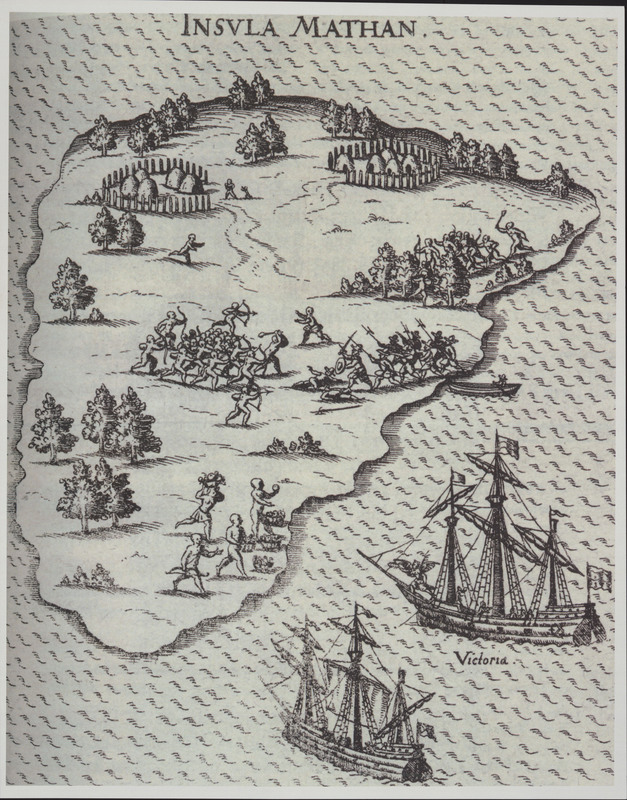 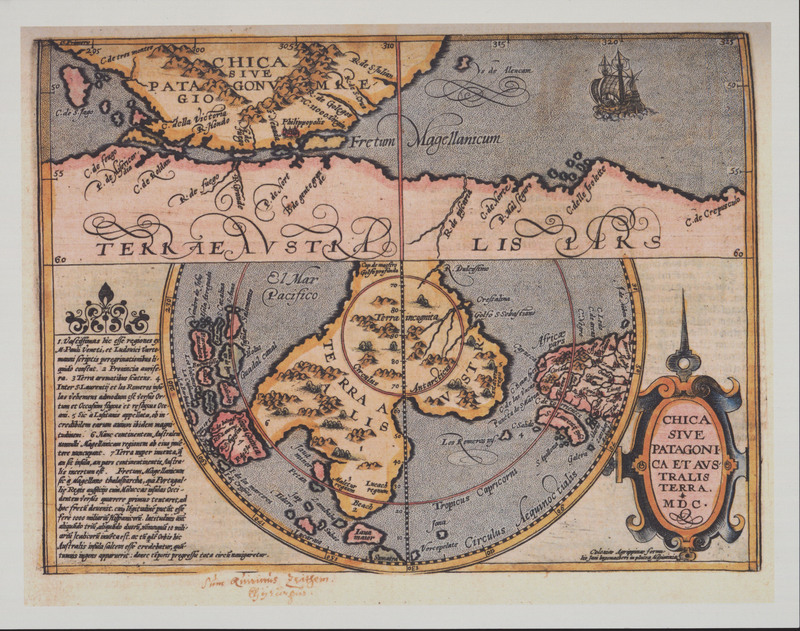 Sir John Mandeville is a figure of some debate. He is the author of the travel narrative The Voiage and Travayle of Sir John Mandeville, Knight. This first person account tells of a journey started in 1322, during which Mandeville traveled extensively in Europe and Asia. In his accounts, Mandeville describes many fantastical sights that have no basis in reality. It is probable that this book was not based on eyewitness accounts, but rather on an interpretation and synthesis of existing travel literature. Many question if John Mandeville existed at all. Despite its inaccuracies, John Mandeville’s book was one of the most widely read and distributed works of its time. It was translated into nine languages and has left 250 extant manuscripts. The earliest is a French version from 1357. The author claims to have reached the entrance to paradise as well as witnessed cyclops, dog-headed people, and cannibals. Mandeville’s narrative shows how the naivete of the general population produced a market for the distribution of fantastical travel narratives. 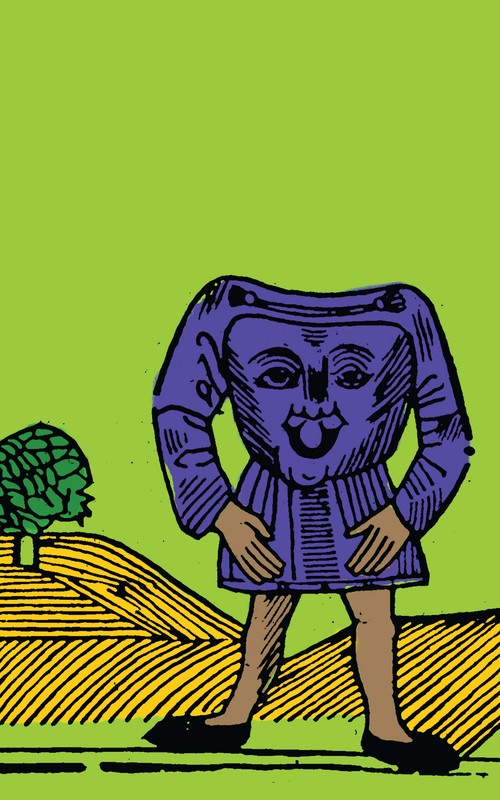 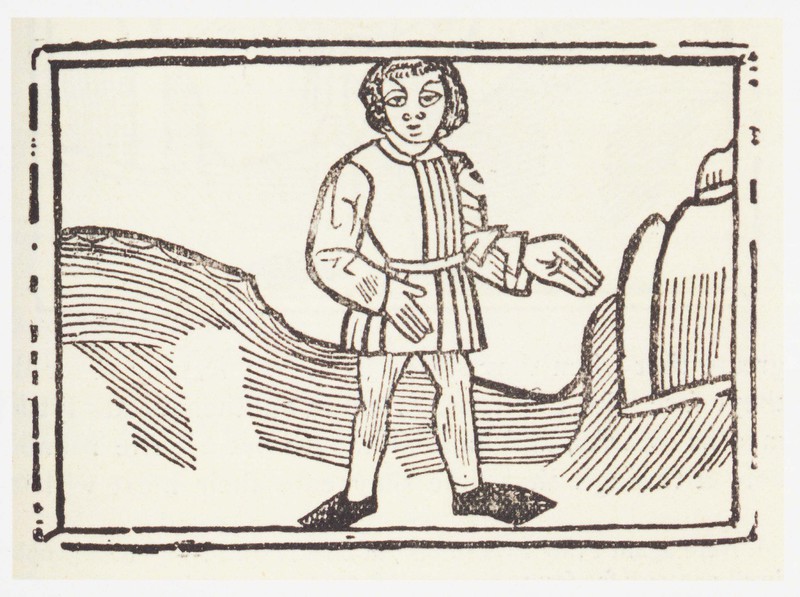 Marco Polo’s travels and subsequent narrative brought him much wealth and fame. His travels inspired many maps and further expeditions, including those of Christopher Columbus. Marco Polo was the son of the Venetian traveler Niccolo Polo, who made a journey to Kublai Khan’s court in the 1260s. Beginning in 1271, when Marco was still a teenager, he accompanied his father on a return journey across the Eurasian continent. His personal travel narrative laid the foundation of the European vision of Asia. It was the first widely circulated account of any extensive travel in the Far East. Marco described novel technologies such as paper money and the burning of coal, as well as his journey to the Khan’s court in Xanadu, in modern day Inner Mongolia. Marco’s work was a primary source of information about the Far East used by Fra Mauro in the creation of his famous world map of 1459.  In addition to the writings of Arab geographers, his work was a strong influence on this important map. 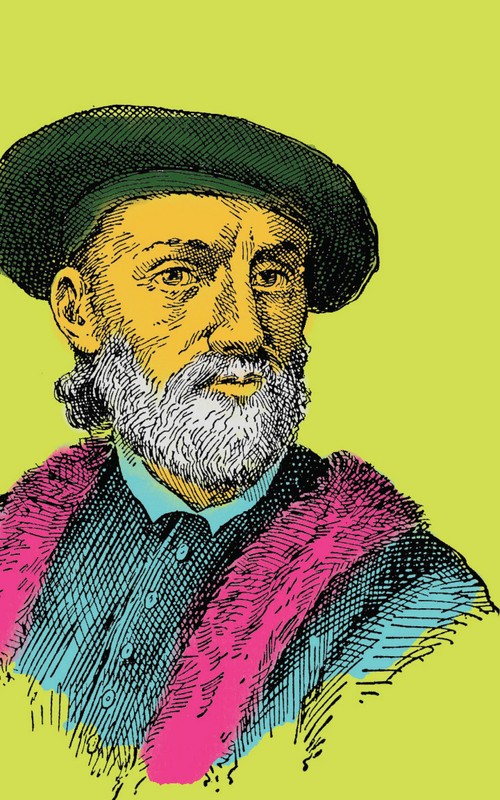 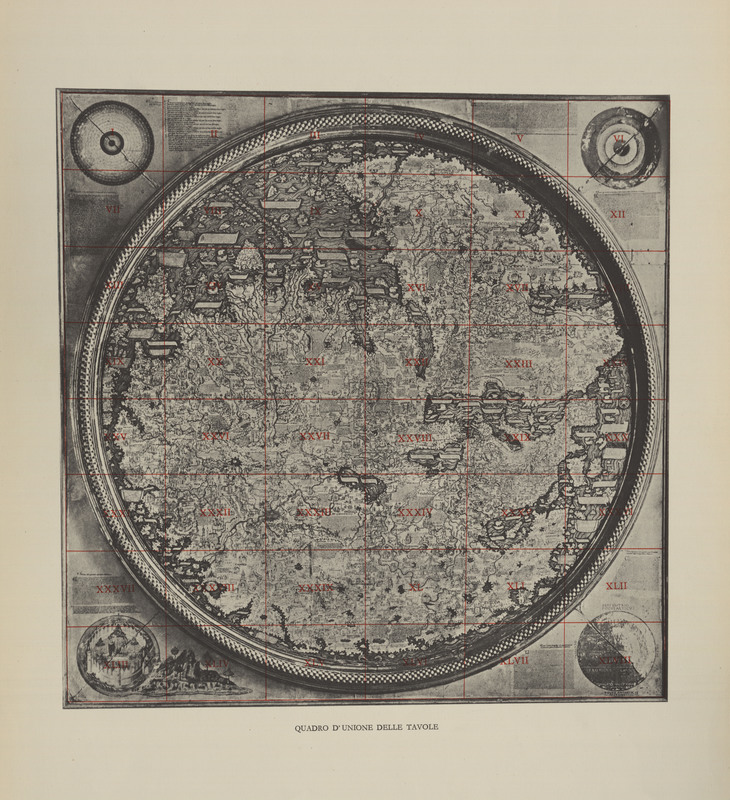 Fra Mauro was a Venetian monk who created a famous map of the world in 1459. He based his depiction of China on the accounts of explorer Marco Polo.

Pilgrimage: Journey of the Faithful