In The Winter's Tale, King Leontes of Sicily wrongfully accuses his wife Queen Hermione of adultery with Polixenes of Bohemia, resulting in Hermione's apparent death and the abandonment of her newborn baby. Written around 1609-1611, The Winter's Tale enjoyed great popularity, but its internal inconsistencies made it unappealing to Restoration and Enlightenment-era critics. 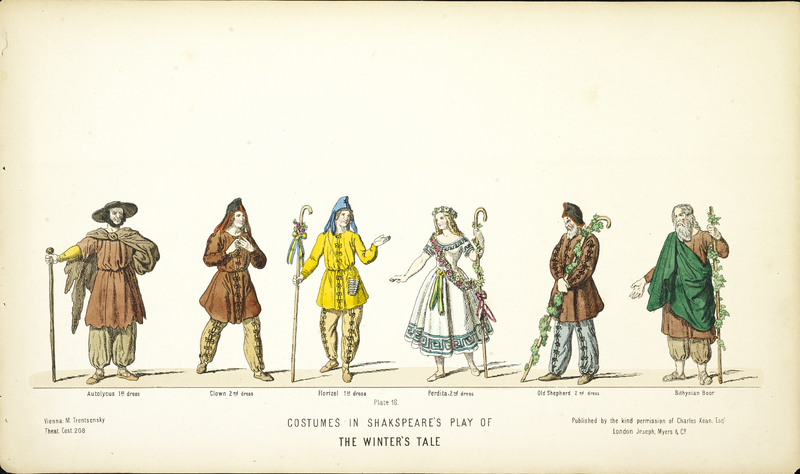 Nineteenth-century revivals often imposed an artifitial consistency on The Winter's Tale. Having chosen to set his 1856 production in the year 330 BC, director Charles Kean excised all anachronistic references to Christianity and to Renaissance figures. He relocated Polixenes' homeland from land-locked Bohemia to coastal Bithynia and depicted both countries in meticulous, with costumes and stage properties often based on artifacts in the British Museum. 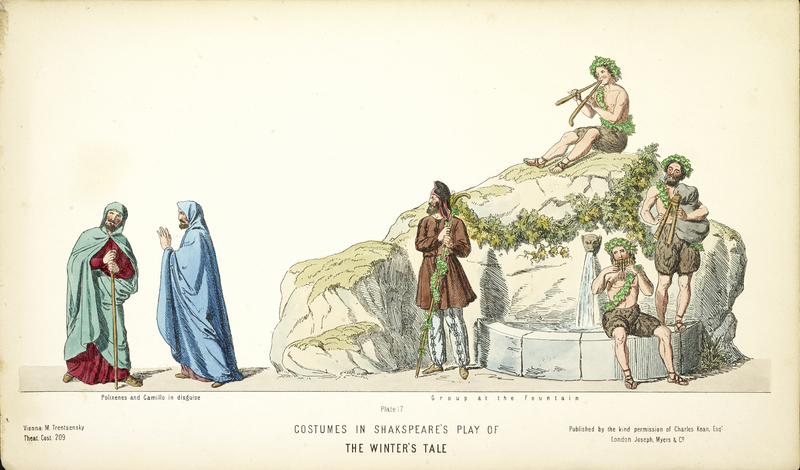 Paul Robeson: The First Black Othello of the 20th Century

In Othello, a Moorish general in the Venetian army secretly marries Desdemona, the daughter of a senator, and he is misled into believing she has been unfaithful. Discovering Desdemona's innocense only after killing her, Othello then kills himself. For most of Othello's performance history, the title was played by white actors in dark make-up. Although African-American Ira Aldridge portrayed Othello to great acclaim in the mid-nineteenth century, Paul Robeson became the first black actor of the 20th century to play Othello on the London stage when he took part in Maurice Browne and Ellen van Volkenburg's 1930 production at the Savoy Theatre. 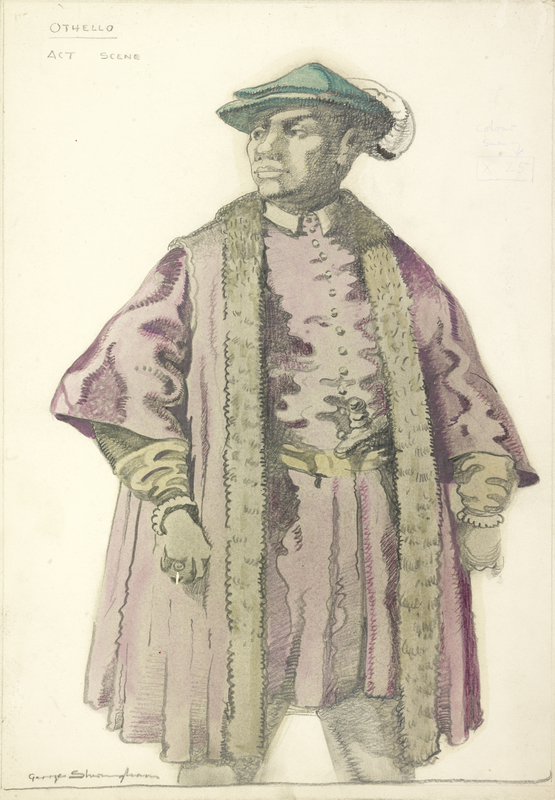 As a whole, this production received mixed reviews. Browne's extensive cuts to the script interfered with its poetic flow and the elaborate sets were deemed ponderous. Paul Robeson's performance, however, was recognized as powerful and historic. One review described Robeson's Othello as " an oak...superb giant of the woods for the great hurricane of tragedy to whisper through, then rage upon, then break." Robeson became world famous for the role, which he went on to reprise in several later productions, becoming the first African-American to play Othello on Broadway in 1943. 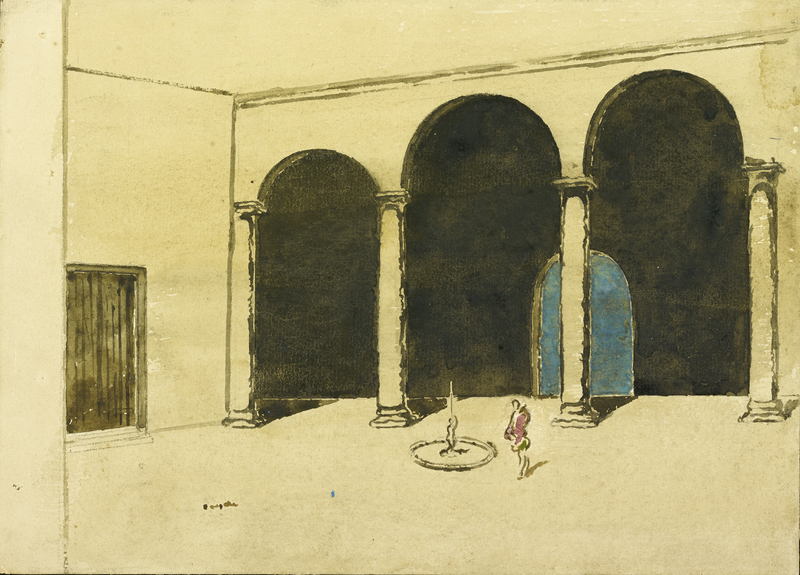 King Richard II functions as a prologue to Shakespeare's epic of the War of the Roses. At the beginning of the play, King Richard II exiles dueling nobles Thomas Mowbray and Henry Bolingbroke. When Bolingbroke's father John of Gaunt subsequently dies, Richard seizes the title and property that should have gone to Bolingbroke, prompting the latter to stage an invasion.

Following fashions and shifting loyalties are essential to understanding the play. A review of the University of Michigan Professional Theatre Program's 1978 production in The Michigan Daily particularly notes that "the black versus red motif in the first and third scenes sleekly complements the quarrel between Bolingbroke and Mowbray." The essemble costume sketch on display give a glimpse of the sumptuous period costumes Professor Zelma Weisfeld designed for this production. 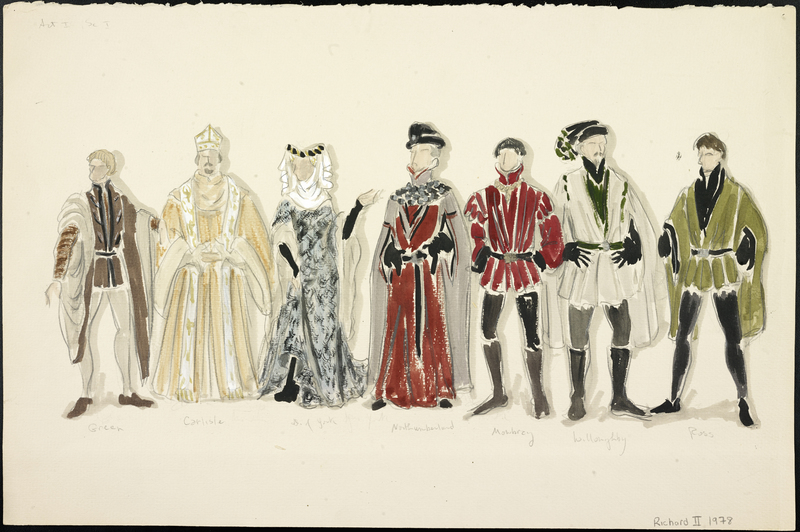 Shakespeare's Richard II is an exploration of the mystique of kingship and the personal and political bounderies that develop when individual incumbents suffer from human weakness. Depending on one's perspective of the play, Richard is a tyrant and Bolingbroke a patriot pushed by circumstance into actions he would not choose, or Richard is a noble martyr displaced by a ruthless but lesser man. 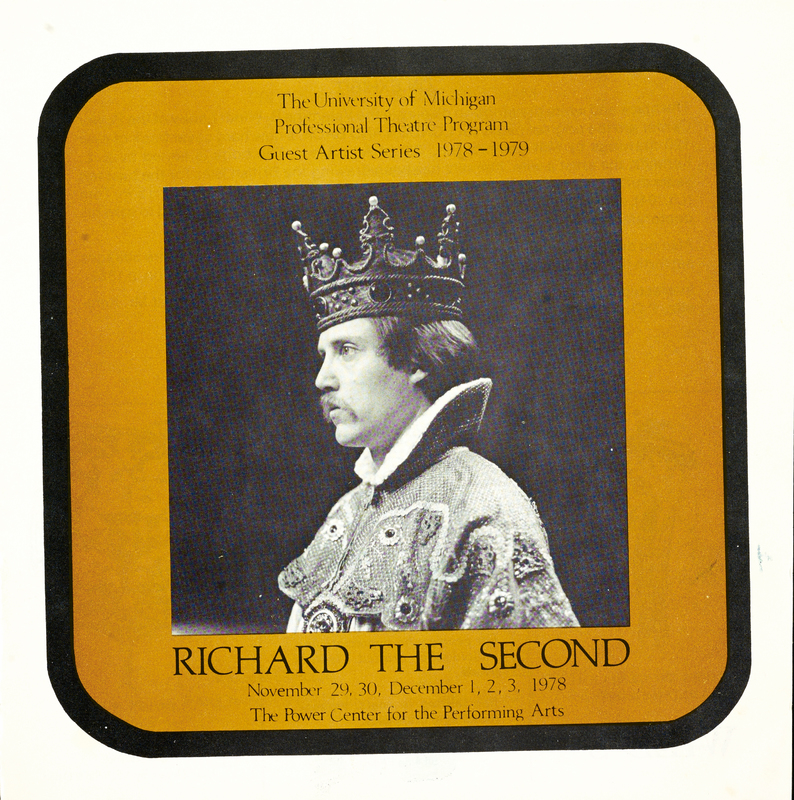 Reviews of the production praised Walken's performance and "the brilliant period costumes by Zelma H. Weisfeld." As the costume sketch on display here shows, Weisfeld chose to dress the king in a warm, light-color palate of gold, white, cream, and beige, emphasizing the spiritual and symbolic aspects of Richard's character. 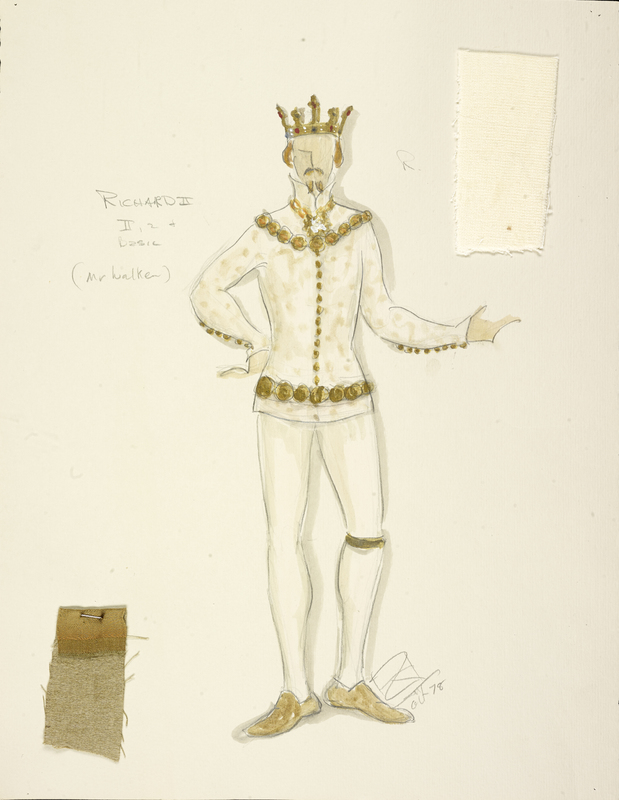