At the turn of the 19th century, America was a relatively weak country with a rapidly-growing population. Exploration westward offered American citizens the lure of land and new opportunities. The government sent numerous explorers West to send back descriptions of climate, physical features of the land, wildlife, and the cultures of Native American tribes they encountered. During exploration/travel west, Americans came into conflict with many of those tribes. flourishing Native American societies, often leading to conflict.

Convinced of their own Manifest Destiny, Americans took hold of lands that were not theirs to claim through treaties that benefited the United States, often to the detriment of Native Americans. This section of the exhibit displays journals, maps, and other documents revealing Americans’ early encounters with the places and people beyond the original colonies. 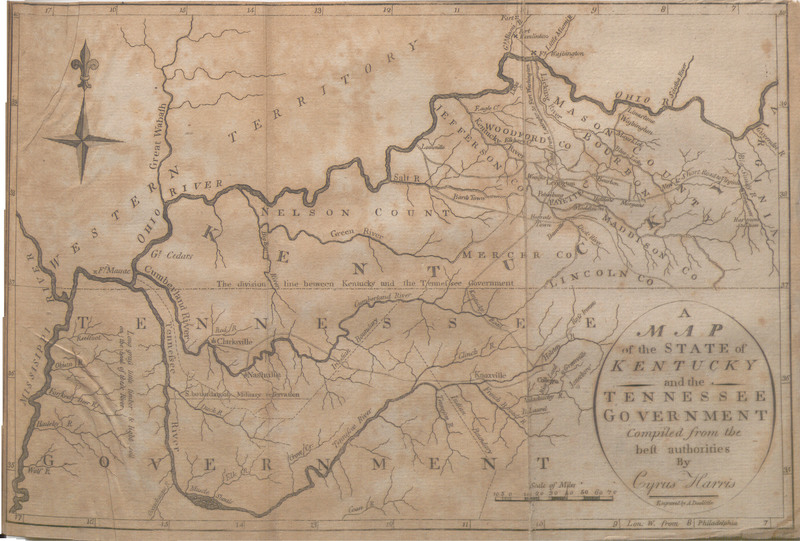 Schultz, Christian. Travels on an Inland Voyage through the States of New York, Pennsylvania, Virginia, Ohio, Kentucky, and Tennessee, and through the Territories of Indiana, Louisiana, Mississippi, and New-Orleans, Performed in the Years 1807 and 1808; Including a Tour of Nearly Six Thousand Miles. New-York: Printed by Isaac Riley, 1810.

Travels on an inland voyage through the States... is a collection of letters from Christian Schultz, a land speculator, to a friend detailing his journey around the aforementioned states and territories. The collection of letters were copied and bound into a single book published in 1810. Displayed here is a map of Kentucky and Tennessee, one of three maps included in this book.

Schultz was one of many Europeans to to embark on travels through North America in the early 1800s. There was an increase in commercial exploration from 1807 to 1829 by representatives of the fur trade. The Lewis and Clark Expedition set out in 1804 to find a water route linking the Columbia and Missouri rivers so that a connection between the Pacific Ocean and Mississippi river could be established. Zebulon Pike (in 1807-1808) and Stephen Long (in 1820) explored the Great Plains to the west of the Colorado Rockies to define the limits of the Louisiana Territory and border between the United States and New Spain. The early 19th century saw a great increase in the desire to explore and map North America, likely influenced both by the Louisiana Purchase and the concept of Manifest Destiny. 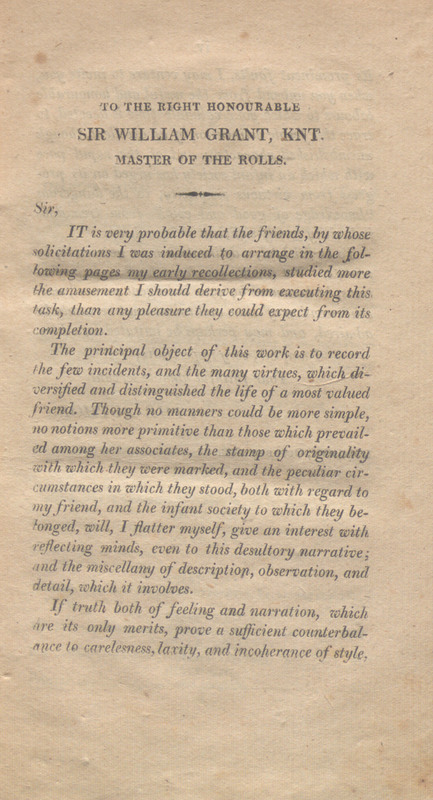 Anne MacVicar Grant. Memoirs of an American Lady, with Sketches of Manners and Scenery in America, as They Existed Previous to the Revolution. New York: S. Campbell, 1809. 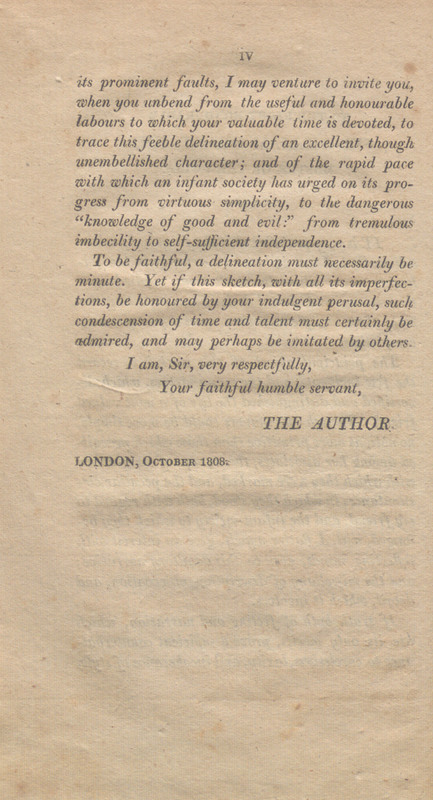 The opening pages of Anne Grant’s work explain that the story is narrated from the perspective of one of Grant’s friends, whose identity is not revealed. Additionally, the reader is advised to look at the United States of America as a new postcolonial society. In fact, Grant drew heavily on her own memories of girlhood in the American Colonies in the 1860s for the content of the book. However, being from the perspective of an elite white woman on the 18th century, the perspective of the book often distorts the information being described.

For example, the book’s seventh chapter focuses on the "gentle" treatment of slaves in Albany, New York. Though it is documented that slavery in New York was more domestic due to lack of field work, describing the relationship between master and slave as "brotherly" shows that Grant is trying to promote the continuation of slavery in America by giving distorted information. Chapter eight compares the roles of Mohawk women in Albany to those of slaves because of their agricultural responsibilities. In reality, however, women in Iroquois tribes enjoyed much greater political power within their community than colonial women, including electing new chiefs when necessary. By greatly overstating the gentility of slavery and rigidity of life for Mohawk women, Grant gives an unreliable and often inaccurate narration of life in early America. 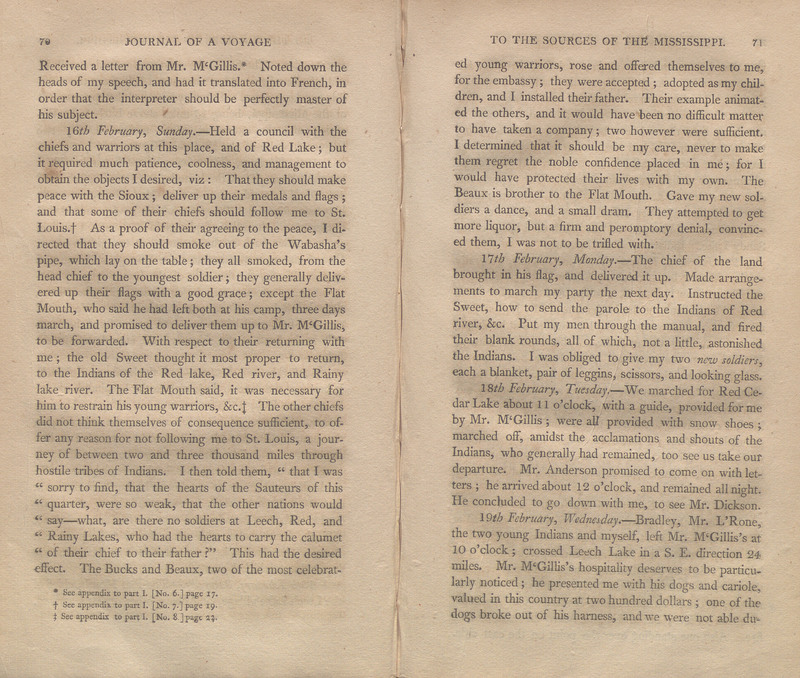 Zebulon Pike. An Account of Expeditions To The Sources of the Mississippi and Through the Western Parts of Lousiana, to the Sources of Arkansaw, Kans, La Platte, and Pierre Juan, Rivers; Preformed By Order of the Government of the United States During the Years 1805, 1806, and 1807. And A Tour Through the Interior Parts of New Spain, When Conducted Through These Provinces, By Order of the Captain-General, In the Year 1807. Philadelphia: C & A. Conrad & Co., 1810.

The travel account of Zebulon Pike gives insight into what the western half of the United States looked like in the early 1800s. The book is formatted as a journal, and as shown in the pagespread on display here, each paragraph begins with the date, followed by an account of what Pike encountered. The pages above describe an interaction with a Native American tribe during Pike's expedition. This book was intended as an informative guide for the government, specifically, the former Vice President Aaron Burr.

Unfortunately, since Pike’s expedition became linked back to former Vice President Aaron Burr’s treason, as he was looking to create an independent country in western America, the effects of Pike’s observations  about the west were muted compared to the famous expedition led by Lewis and Clark. Nonetheless, Pike’s expedition led to increased trade with Northern Mexico and gave great insight into the landscape of the area. Pike also gathered information about the Native American tribes living in western North America. While much of the journal was an accurate recount of his findings, parts were less accurate. For example, he once described the Great Plains as being similar to the deserts of Africa; this discouraged many people from wanting to move  out west. Pike, however, remained convinced that Westward expansion was both possible and desirable.