During the mid-19th century, American society was characterized by social reform and innovations in areas such as media and medicine. The impact of these changes can be clearly seen in the realm of daily life, especially through writings on food and drink. The social reform sought by the temperance movement is shown through a Boston almanac, newspaper clippings in a farm account book document ways that housewives sought out and used home medical treatments, and advances in printing allowed large books on gardening to be printed en masse so that they could be widely circulated amongst farmers.

These documents span a wide variety of genres and all represent a different view of society. Written by or for common citizens instead of wealthy elites, they targeted large, public audiences as well as private ones. While diaries and recipe books were predominantly meant for personal use, they also are evidence of individuals’ views of society at the time and provide insight into what information was important enough to them to preserve in a written record. Sources written for a wider audience, such as the almanac or catalog of vegetables, show what information upper-class educated authors believed to be relevant, as these collections of information were cataloged and organized to be used as references. Though they seem to be compilations of facts, they could and often did also contain elements of social commentary, discussing relevant topics like temperance in hopes that the non-elites who read them would be influenced by their arguments. All of these writings on food and drink meaningfully contribute to our understanding how broader changes in society and technology manifested in daily life during this time period. 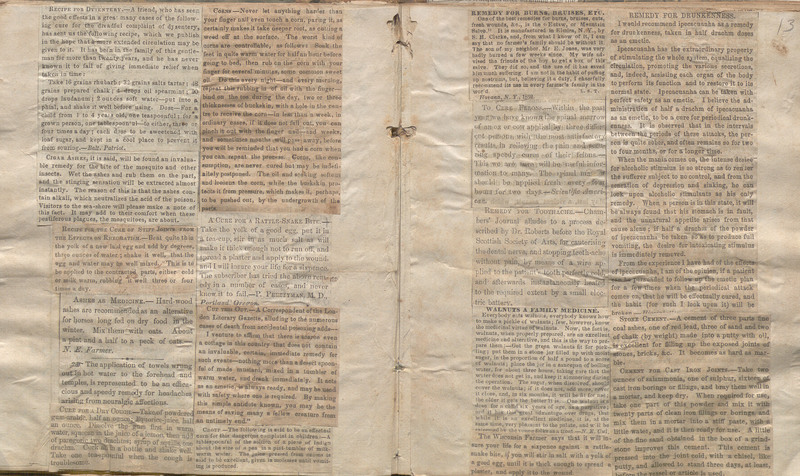 This tattered mid-19th century notebook was first used to keep farm accounts and records of purchases, and then later re-purposed as a scrapbook of newspaper clippings, primarily recipes and medicinal remedies. Despite a paucity of medical schools, trained doctors, and scientifically proven treatments, the number of medicinal remedies pasted into this scrapbook provides tangible evidence that Americans were extremely interested in both scientific advances and home treatment of illness. Many of the medicinal clippings in this notebook originated in national publications based in Massachusetts, New York, and Oregon, which were major centers of both education and publishing.

For centuries, humoral theory played a central role in European treatment of diseases, in which sickness was blamed on an imbalance of bodily fluids. By the 19th century, other ways of understanding disease were developing, but the influence of humoral theory can still be seen in certain uses of particular foods and drinks thought to warm or cool, dry or moisten the body. In other cases, the logic behind the use of particular foods requires further investigation. As can be seen in the remedies displayed on this page, there was a significant appeal to using everyday ingredients such as walnuts, rhubarb, spearmint, and oats to try to cure health problems ranging from snake bites to stiff joints. Whether she intended to treat only her own family or had larger medical ambitions, this Farm Account and Recipe Book shows that the compiler had a great interest in the developing medical field. 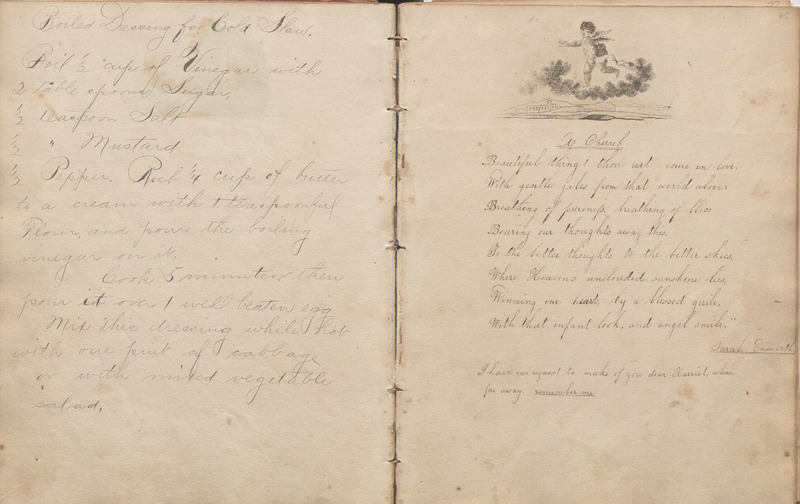 This image shows an excerpt from an autograph book belonging to Harriet Lester. It was used as an autograph book from 1832-1837, and then subsequently repurposed as a recipe book from 1902-1912. On the left side of the spread a recipe titled “Boiled Dressing for Cold Slaw” is written in fine cursive. On the right side at the top of the page, there is a small image of a young angel flying through the air, delivering envelopes. Beneath this image, there is an autograph left in the form of a poem for Harriet by a friend named Sarah Ensworth. The final line of the verse is simply, “remember me.”

Autograph books were popular in the pre-yearbook era for collecting parting messages from fellow students. Harriet attended a prestigious institution called Canterbury Female Boarding School, which is displayed through the advanced language of her friends who left autographs in this book. During this century, there was no organized public education system and therefore boarding school was an important way for girls such as Harriet to learn proper writing and reading skills.

Several decades later, this autograph album was repurposed as a detailed recipe book. Many of the recipes presented on the pages, such as coleslaw and oatmeal cookies, reveal certain dishes and flavors that have endured American culinary culture for well over a century. This personal diary provides insight into the life of women during this era of history because Harriet chose to use this sacred space for what she valued most: cooking and friendship. 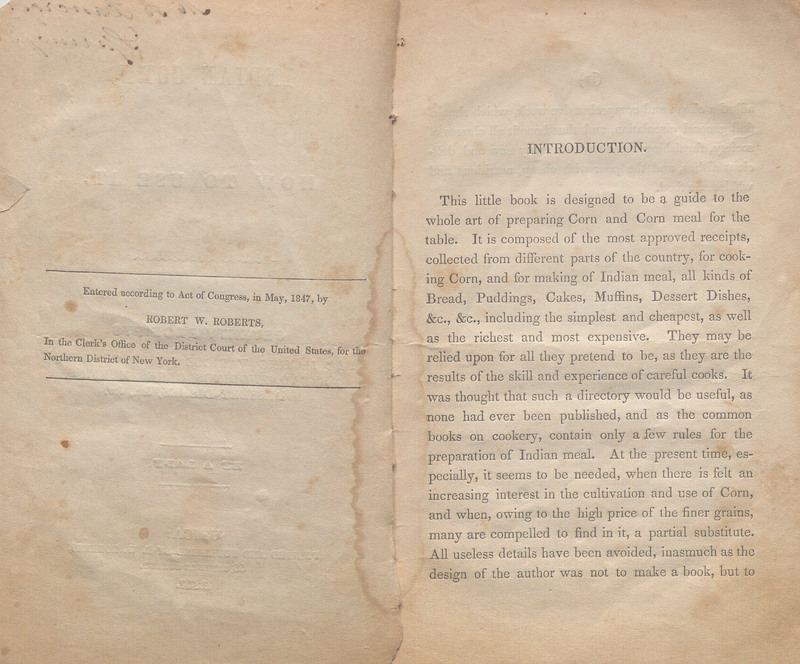 This collection of Indian corn recipes was used tremendously based on its waterstained
pages and torn edges. The introduction page states the types of recipes within, including puddings, muffins, and desserts. This author indicates that these recipes would “benefit all classes of society.”

It was titled Indian Corn because of the necessary distinction between corn - often used in England and even in early America to mean any grain, and maize or “Indian corn.” In early to mid-nineteenth century America, maize was often cheaper and more-widely available than wheat. For that reason, it often tended to be associated with less wealthy households. The introduction to Indian Corn, and How to Use it notes that even those who might not have used corn in the past are now finding it attractive, “owing to the high price of the finer grains.” Nonetheless, the author seeks to provide not only frugal recipes, but those she describes as “the richest and most expensive.” 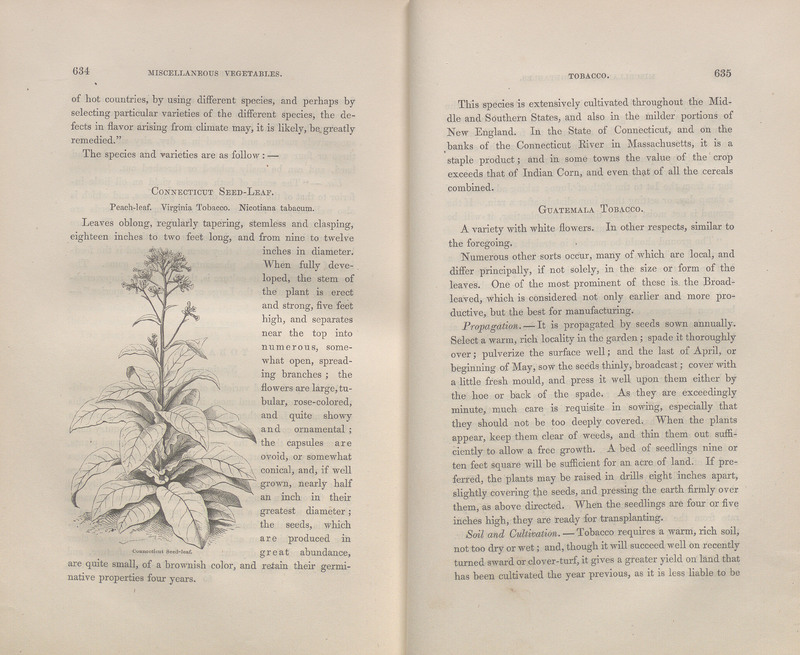 The Field and Garden Vegetables of America is a sturdy, hardcover book that contains twelve chapters, all arranged by plant type. Several of the pages include illustrations of plants that couple with their descriptions, including the spread above, which features two types of tobacco.

Born in 1815 in Massachusetts, Fearing Burr spent most of his life engaged in mercantilist pursuits, which were often fueled by his interest in horticulture. Though his book was published during the Civil War in 1863, Burr’s Massachusetts home was relatively isolated from the warfare that characterized the rest of the country.

Burr uses colorful and admiring language to describe the vegetation. He provides descriptions of a variety of plants, referencing their size, color, shape, and overall quality. Because of this, it is clear that Burr’s purpose in writing his book was more about creating a resource for gardeners that cataloged as many plants as possible and less of an instruction manual on how to maintain each plant. In his descriptions of tobacco, for example, Burr only briefly mentions that the crop was extensively cultivated in the southern states and was a staple of the economy. He instead focuses on the appearance of the crop once it is fully developed and what it looks like when it is ready to be cultivated. Even today, Burr’s book provides insight into early American botany and society’s growing interest in horticulture. 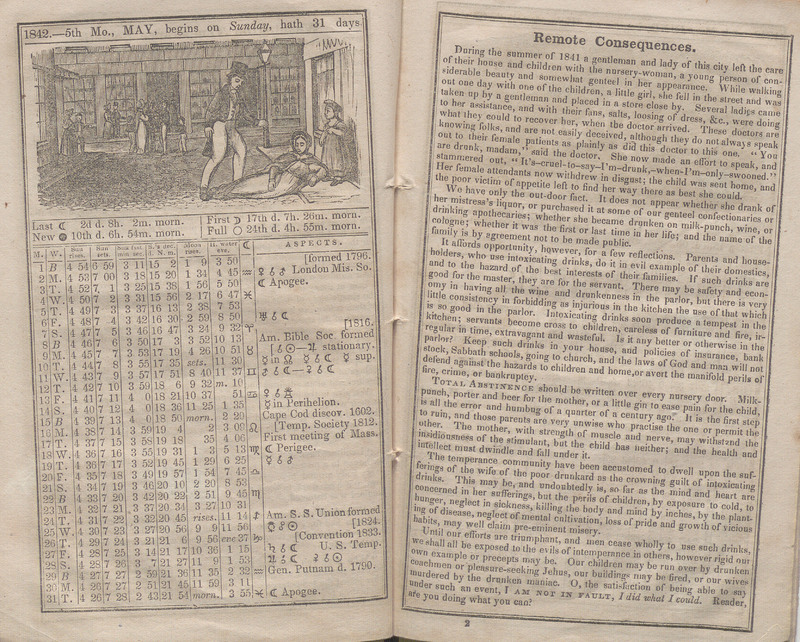 This 1842 edition of the Temperance Almanac of the Massachusetts Temperance Union, published by William S. Damrell, is a small, fragile booklet of about twenty pages that not only contains standard almanac information such as weather forecasts and astronomical data calculated specifically for Boston, but also promotes a common theme of temperance.

The temperance movement, which emerged in the 19th century, embodied for many white Americans the idea of purity, by forbidding consumption of any alcoholic beverage. By the 1840s, this movement had spread to many states on the east coast, including Massachusetts. The publication illustrates and advertises the early stages of the temperance movement, and even states on the front cover that all profits made from the almanac will be used for the “temperance cause.” The almanac layout is set up so each page spread contains a detailed agricultural and astronomical table for the corresponding month along with an intricate illustration on one page, and includes a short story or event that highlights the negative effects of alcohol and advocates for prohibition on the other page. The use of gravures enhances this idea, offering to the audience the idea of a better-off style of living through abstinence from alcoholic beverages. The booklet seeks to address many different audiences, from “the young women” to “former soldiers,” by depicting social consequences and health issues in a way designed to persuade and warn people against drinking alcohol.

Abolition and the Civil War