Religious literature in the early and mid-19th century was heavily influenced by attitudes springing from the second great awakening. This Protestant-centered revival in the United States rejected many of the ideas from the Enlightenment, attracted many Americans to Christianity, and provoked the birth of a variety of new interpretations of Christianity. Through the alliance of similar-minded sects, publishing conglomerates, like the American Sunday School Union mass-produced Christian-centric tracts to educate and convert youth to Christianity. Religious literature during this period contested certain Enlightenment-era approaches to religion, like Deism. The Great Awakening was embraced by many Americans expanding Westward to the frontiers during the era of Manifest Destiny. Religious literature was crucial in justifying the westward-bound settlers’ intentions and the hardships they endured. Additionally, the new wave of religious fervor leant a breeding ground to the development of new interpretations of Christianity like the Church of Jesus Christ of Latter-Day Saints, founded by Joseph Smith.

Overall, the Awakening was as effective as it was in strengthening Protestantism in America  because of the emphasis it placed on the the inclusion of all people—white and black, rich and poor—in Protestant denominations. This period saw an enormous uptake in conversion to Christianity and church membership, particularly among women, youth, and  the enslaved. 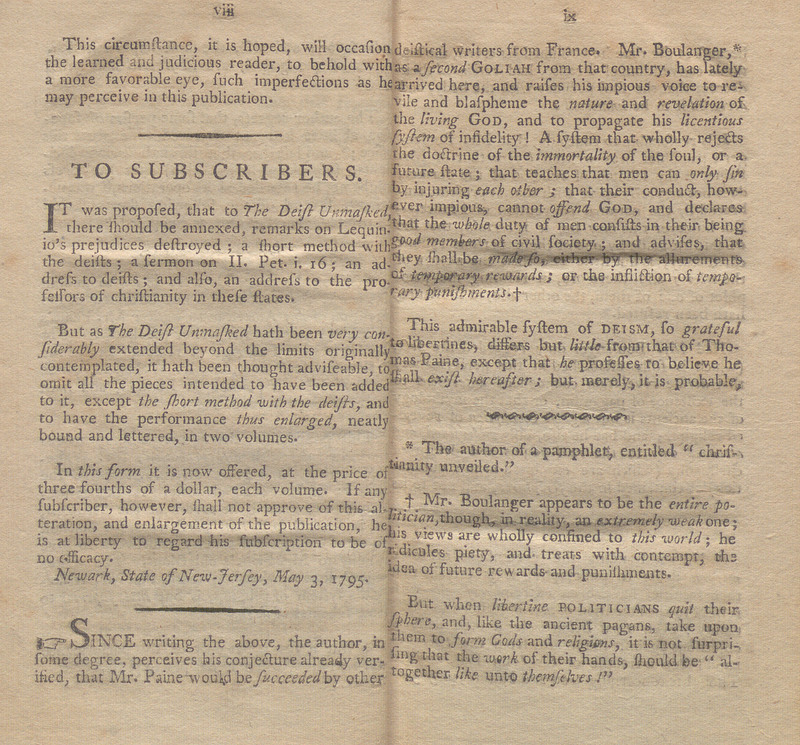 Reverend Uzal Ogden. Antidote to Deism. The Deist Unmasked; or, An Ample Refutation of All the Objections of Thomas Paine against the Christian Religion, as Contained in a Pamphlet Intitled The Age of Reason, Addressed to the Citizens of These States. First volume. Newark (State of New Jersey): Printed by John Woods, 1795.

Written in the late 18th century, The Deist Unmasked... was published at the dawn of the Second Great Awakening, a religious movement which revitalized religion in United States. Deism was a system of belief that asserted the existence of God according to the "natural law of nature" rather than referring to the sacred texts. Ogden’s aggressive stance against Deism reflects the rejection of Enlightenment ideal of rationality during the Second Great Awakening. The page on display shows a notice "To Subscribers." In this small, "neatly bound and lettered" book, Ogden contests Paine and Boulanger’s arguments that actions have no influence on salvation after death, that people’s purpose is "their being good members of civil society," not to submit to "a living God," which Ogden believes, governs people’s lives. This work was written as a refutation to Paine’s popular pamphlet The Age of Reason. Paine’s pamphlet was easily distributed and cheap to produce, allowing him to spread Deism, a relatively elite concept, widely and to numerous audiences. Ogden sought to reach a similarly broad audience with his work. The price of 75 cents was relatively affordable by the American masses. 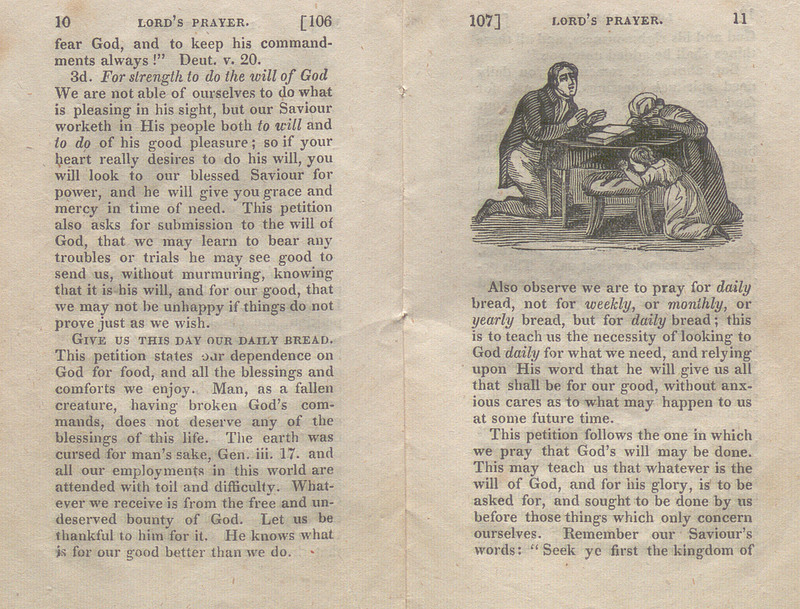 This small tract, only 6.25 by 2.75 inches, consists of only 18 pages. The text is divided into larger print sentences of the Lord’s prayer, followed by smaller text commentary. The small size of the tract allowed it to be easily carried and circulated. The tract served as a tool and a guide for young people to take an active role in the widespread evangelist movement of the Second Great Awakening.The pagespread displayed here shows a dutiful Christian family consisting of a father, mother, and child praying at their dinner table. The father, the spiritual head of the family, is looking up towards the heavens, connecting directly to God. The mother and child both remain with their heads bowed. Their position suggests not only their subservience to God, but also the male authority over women and children in the household. The verse from Genesis listed on the left-hand page confirms this relationship. The verse reminds women of their  responsibility for bringing sin into this world, when Eve, the earth’s first woman, allowed herself to be deceived by the devil. This picture presents the publisher’s ideal gender roles in religion and society, with the hope that children will follow the same model of living. Tracts seeking a juvenile audience, such as this one, had a surprising level of success, as the Second Great Awakening witnessed many youths playing an active role in evangelism through tract distribution. 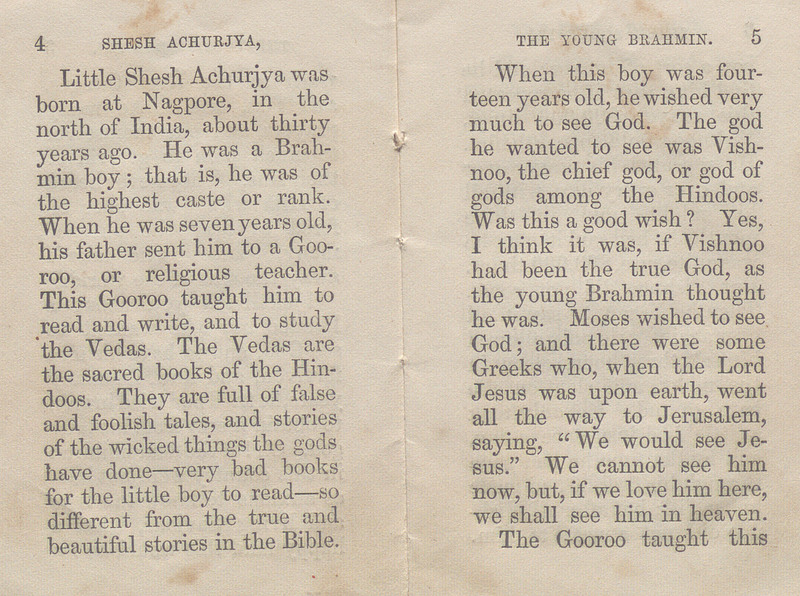 This child-sized book is only 4.5 inches tall and has a total of 16 pages of text. There are two images in the book, on the first and last pages. The pagespread displayed here introduces a young 14 year old named Shesh Achurjya and explains that, as a member of the elite Brahmin class of Hinduism, he was tutored in reading and writing. From that education, Shesh developed a desire to see the chief Hindu god, Vishnu. The book explicitly insults Hinduism, calling it morally and factually wrong, and asserts the "correctness" of Christianity.

The American Sunday-School Union created this book to inculcate children in the belief that Hinduism is inferior to Christianity. It starts by calling the Vedas, the sacred text of Hinduism, lies. The story asserts that instead of reading such texts, children should be reading stories from the Bible. Hinduism was not widespread within the United States at this time, but there were immigrants from Asia coming to the United States, so perhaps the members of the American Sunday School Union were afraid that some might be bringing their "incorrect" religion with them. Certainly, this book aims to teach children to see Christianity as the only true religion and to scare children away from other religions, such as Hinduism. 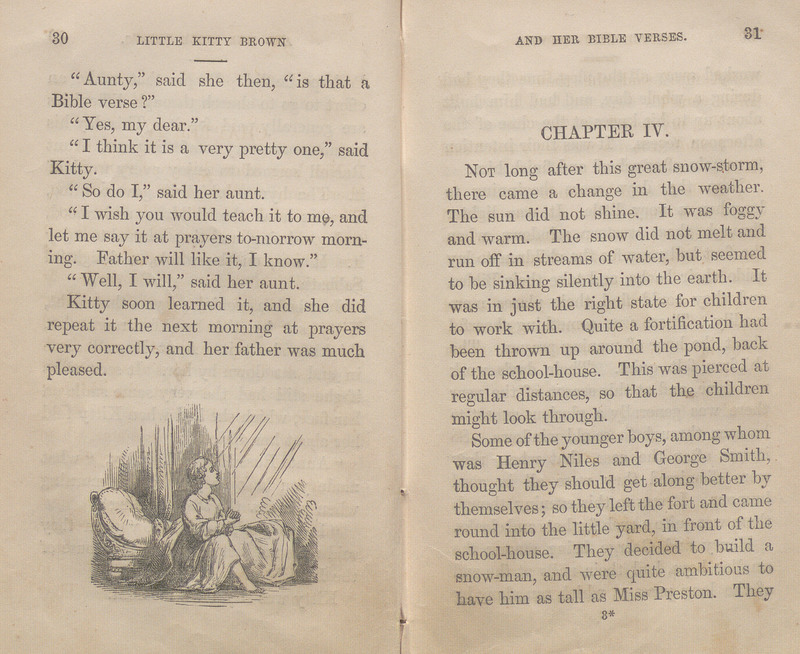 Little Kitty Brown and her Bible Verses was published by the American Sunday-School Union in 1851, following the end of the Second Great Awakening, a widespread religious movement that vastly increased the number of Christian converts through mass revival services. With a resurgence of Evangelical Christianity in the country came a wide market for books like this one, which worked to rekindle an interest in religion and assemble a Christian society.

This 4 by 6 inch book encased by a sturdy, brown cloth cover was designed for the small hands of a child. On the page displayed here, Kitty Brown, a child, displays an eager desire to memorize a Bible verse, so she can repeat it to her father at morning prayer. On the last page of the third chapter, she is illustrated in a praying position, with folded hands and facing upwards towards a bright, divine, light suggesting an eagerness to accept and admire God. The personal anecdotes of Kitty Brown recounted in each chapter conclude with the memorization and application of a verse from the Bible as a way to interpret her stories. Kitty Brown represents an ideal Christian child, who desires to be religious and obedient, thus speaking to the purpose of the book. Works such as this one sought to encourage Christian living among the upcoming generation and to reaffirm the centrality of religion in American life. 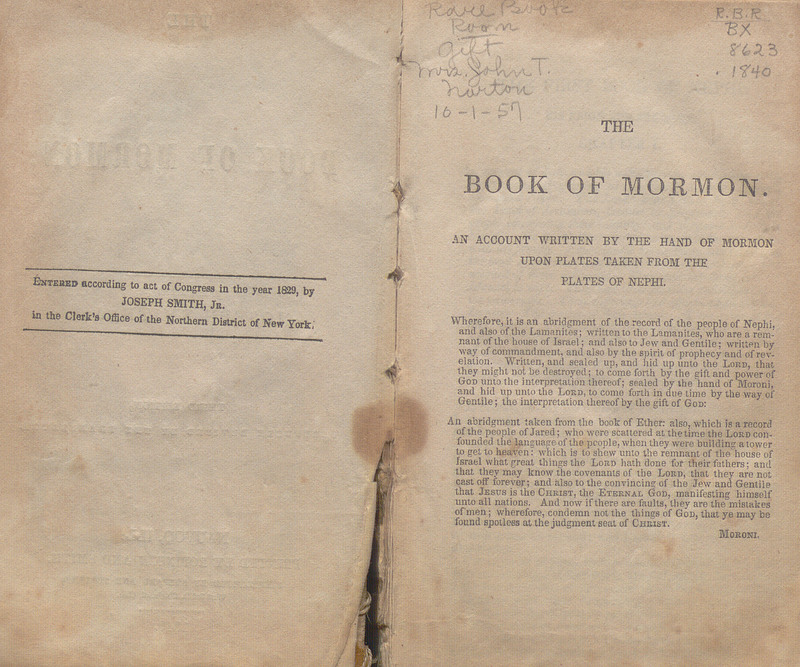 This third edition of The Book of Mormon was published in 1840 by Joseph Smith. The text is by The Church of Jesus Christ of Latter-day Saints, intended as a sacred text and a continuation of Jesus’s teachings.

The 3 ½ by 5 inch 3rd edition of the The Book of Mormon is leather bound with beige, discolored pages from what appears to be oil and water stains. The spine has fallen off while the cover is barely attached; holding on by threads from remnants of the spine, suggesting that this book was read and re-read many times, and perhaps carried from place to place by its owners. This edition was published in 1840 after the second edition was revised by Joseph Smith. The Church of Latter-Day Saints is a branch of Christianity that considers The Book of Mormon an additional testament of Jesus Christ. Smith asserted that the text was derived and translated from ancient buried plates which were brought to his attention by an angel. The Book of Mormon has been translated in 108 languages.

In the 19th century, some of the leaders of The Church of Latter-day Saints practiced polygamy by marrying multiple wives, but this was eventually outlawed by the United States government. There is some debate over whether—and to what extent —the text of The Book of Mormon condones the practice of having multiple wives. One place it is mentioned is where Smith notes that God only punishes some men who have multiple marriages, whereas he rewards others. From the perspective of believers, The Book of Mormon’s chapters attempt to further explain the decisions of Jesus Christ and offer additional information about stories only briefly mentioned in the Hebrew Bible and the New Testament. 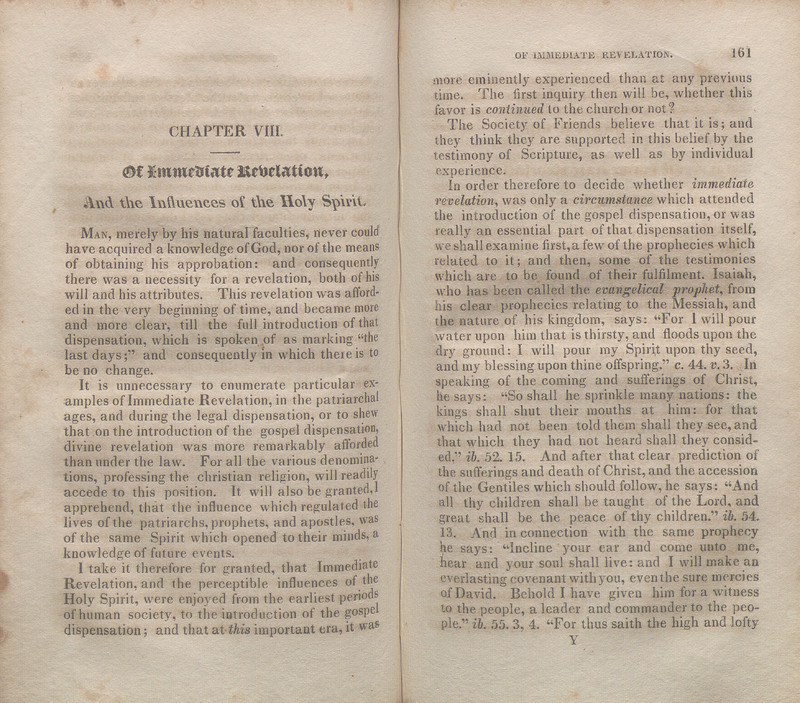 Elisha Bates. The Doctrines of Friends, or, Principles of the Christian religion, as held by the Society of Friends, commonly called Quakers. Mount Pleasant, Ohio: Printed and published by the author, 1825.

Written and published by Elisha Bates, the most prominent Orthodox Quaker of Ohio, this piece examines the fundamentals and values of Quakers in each chapter, and was written as a broad overview of Quaker religion. Known also as The Society of Friends, Quakers were dissenters from the Church of England.

Chapter 8 is shown here, titled "Immediate Revelation" after a concept rooted within the Quaker faith. In the unorthodox views of Friends, God lived within the individual, and all people could experience God, not through an intermediary, but with an immediacy found within one’s self. This article of faith was fundamental for Quakers, and unsettling to conventional Christianity.

Quakers were pacifists who encouraged a peaceful existence amongst all people. Interested in total equality, Quakers actively promoted women’s rights, Native American protection, and abolition of slavery, and they advocated for the incarcerated and mentally ill. Quakers held strong beliefs, driving change through peace and equality. Deviating from mainstream religion, the group promoted positive change within the New World.