The Qur'an is the Islamic scripture. Muslims regard the Qur'an as the revealed word of God, received and transmitted by his messenger Muhammad (d.632) in the seventh century CE. Originally transmitted orally and regularly recited as a matter of worship and piety, the text of the Qur'an was authoritatively established within twenty years after the Prophet Muhammad's death. This form became the model for subsequent copying and distribution. Qur'anic recitation and calligraphy are among the most respected forms of art in Islam, and each are performed according to well established rules (eg tajwīd for recitation) that are transmitted from master to student.

The manuscripts featured here represent a style of Qur'anic transcription which flourished in the early ʿAbbāsid period of Islamic history, that is from the mid-8th century to the 10th century AD. 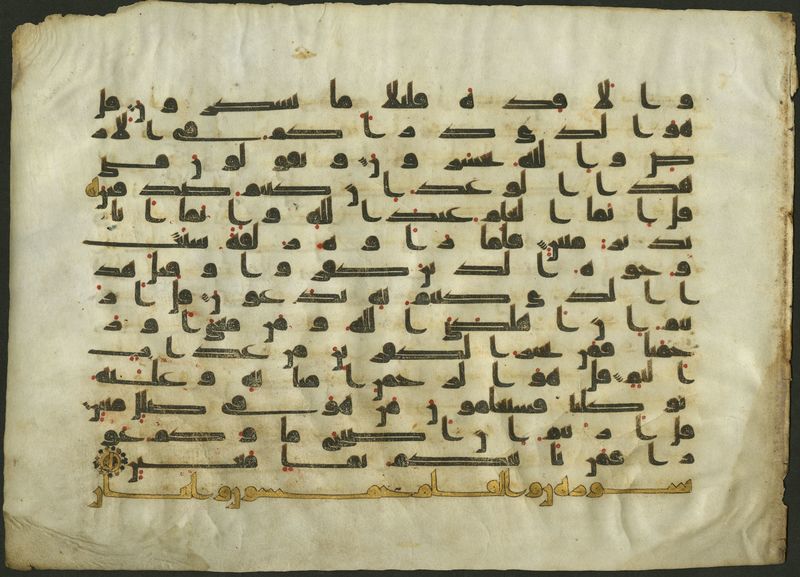 Isl. Ms. 1049, early Abbasid Qur'anic fragment carrying Q 67:23-30 plus illuminated heading for Sūrat al-Qalam (68) on the recto. This Qur'anic fragment has been executed in a spacious style of early Abbasid / Kufic script, generously yet graciously arranged to fill this large page size, with short vowels provided in the form of red discs. Gold has been used to set off a new sūrah (chapter) opening, providing the title and number of verses. Sets of four oblique strokes indicate verse divisions, an illuminated letter hā' marks groups of five verses, and an illuminated roundel marks groups of ten verses.

Copies of the Qur'an produced in this period exhibit a number of common features, namely: a horizontal (oblong) codex format, use of parchment as writing material, use of colored inks and gold for functional decorations and vocalization, and writing in thickly lined scripts -- referred to as early Abbasid or Kufic -- featuring elongated horizontal strokes and uniform spacing between groups of letters.

Opening carrying the text of Q 4:90-92 in Isl. Ms. 162 a, an early Abbasid Qur'anic fragment comprising several coherent gatherings still sewn together. Despite the small page size, the text has been executed in another spacious early Abbasid / Kufic script style typical of the ninth century. Given the large size of the script and the correspondingly small number of lines per page, this style was especially well-suited to production of multi-volume copies of the Qur'an. Short vowels have been provided in the form of red discs and a group of ten verses has been marked with an illuminated roundel. A later hand has supplied the diacritical letter pointing, likely in an attempt to ease reading. 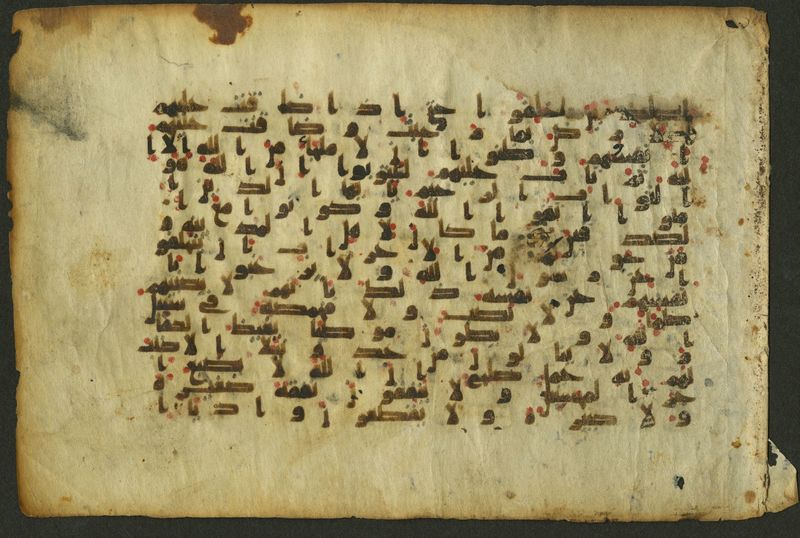 Isl. Ms. 163, early Abbasid Qur'anic fragment with text from Q 9:118-121. In the case of this small format copy of the Qur'an the scribe has employed a style of early Abbasid script that features compact letterforms which accommodate a greater number of lines per page. A brown rather than black ink has been used. An illuminated roundel marking a group of ten verses can also be seen.

As evident here, Qur'anic manuscripts from this era typically survive in fragments, with the folios of original codices now dispersed across collections. Projects such as The Digital Muṣḥaf and Corpus Coranicum endeavor to virtually reassemble these dispersed fragments. 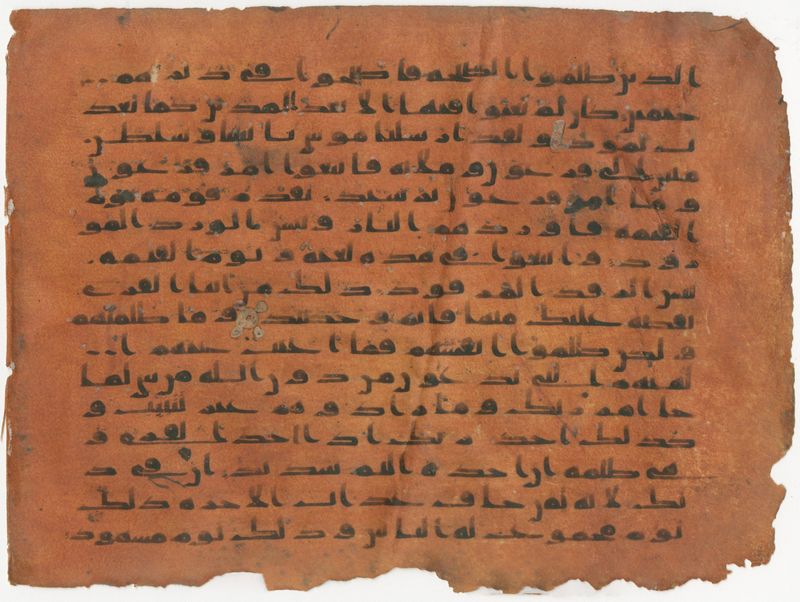 Isl. Ms. 1048, fragment from early Abbasid Qur'anic codex on parchment dyed a striking orange-red color, carrying Q 11:93-103 on the verso. An analysis of the script suggests a mid-8th century dating. Other fragments from this codex are preserved in the Nasser D. Khalili Collection (cat. 11 p.58 in Déroche, The Abbasid tradition), the Metropolitan Museum of Art (accession nos. 40.164.1a and 40.164.1b), and the Los Angeles County Museum of Art (accession no. M.2002.1.389).

Qur'anic fragments from this era are not the earliest extant, but are nevertheless quite valuable for the study of the early transmission of the Qur'an and the history and development of the Arabic language.

As with copies of the Qur'an from the earlier Umayyad period, these early Abbasid copies of the Qur'an were written on parchment. Though long the preferred medium for Qur'anic transcription (as befit the scripture for the earlier traditions of Judaism and Christianity), parchment was eventually supplanted by paper, which was more affordable and more capable of being fashioned in large sizes.