The battles waged on the political and religious stages of the 17th century had a direct impact on the publishing world of Amsterdam. There were two distinct periods where Dutch commercial cartography and publishing flourished. The first period, centered in the South Provinces around Antwerp, lasted into the 16th century and accompanied the city’s economic growth and cultural boom. The second, situated in the Northern Provinces, continued through the end of the 17th century and saw Amsterdam supplant Antwerp.

The first wave of prosperity for Dutch cartography in Antwerp was greatly influenced by the nearby University of Leuven. Located about 30 miles south, the university was one of Europe’s great centers of learning and had a far-reaching impact on the development of cartography across Europe. Studying at Leuven, the famous Flemish mapmaker Gerhard Mercator was greatly influenced by Gemma Frisius, the first to publish on the use of triangulation for accurate surveying (Koeman et al., p.1297). It was here where Mercator established his business, the first commercial map production in the Low Countries. During Mercator’s lifetime map publishing grew from being of lesser importance, concerning only academics and printers, to becoming a profitable business and essential economic enterprise (Koeman, p.1299).

The largest publisher at this time was Christopher Plantin whose publishing firm in Antwerp came to monopolize the map business. In 1570 Abraham Ortelius’s atlas, Theatrum Orbis Terrarum, first published by Gilles Coppens de Diest and later by Plantin, quickly became a commercial success throughout Europe. With the Theatrum and other important works the Low Countries soon surpassed Italy in map production and the Golden Age of Dutch mapmaking had commenced.

The second period of prosperity in Dutch cartography was underway in the Northern Provinces by the 1630’s, when the maps from our project were printed. By this time Amsterdam had surpassed Antwerp as the largest publisher of cartographic materials in the world. This shift occurred in large part because of the exodus of many of the best engravers and cartographers out of the Southern Provinces. At the same time, the growing demand for maps, both at home and throughout Europe, ensured a robust and stable market. Specific map firms, such as the Blaeu and Hondius families, profited immensely by officially supplying the Vereenigde Oost-Indische Compagnie (V.O.C.), or Dutch East India Company with maps. The V.O.C. was established in Amsterdam in 1602, and their rapid growth created the need for a great number of maps and sea charts. The company’s distribution networks greatly benefited Dutch publishers, as the V.O.C. could easily move printed works to far flung markets. At the same time each expedition’s return meant vast amounts of new and increasingly accurate geographic information for Dutch mapmakers to incorporate into their maps.

Throughout the course of our project we studied the variations and unique features of the maps’ paper, looking for common attributes. With the invention of the printing press in the 15th century, parchment as a means for printing was quickly replaced by paper. During the 17th century, making paper by hand, or “antique laid paper,” was a multi-step process, with many opportunities for variation or the accidental creation of unique features. In the 1600’s, paper was made from rags, which were broken down, or “retted,” for their fibers. The fibers were then beat into pulp and mixed with water to give the necessary consistency required for the type of paper. A wooden handmould, constructed of wood “ribs” and a screen of metal wires, called “laids,” was dipped into the fibrous water repeatedly, until eventually a fresh sheet of paper would be carefully deposited on damp woolen felt. Subsequently the stacks of paper and felt would be pressed, dried, and eventually “sized”, using gelatin. “Sizing” made the surface of the paper liquid and wear resistant, making it easier to be printed or written upon.

As paper mills operated from Monday to Saturday, paper sizing occurred throughout the week, resulting in what former University of Michigan Library Senior Conservator, Cathleen Baker, refers to as “Tuesday/Saturday paper.” As gelatin spoiled quickly, alum and other preservatives were added to the mixture throughout the week. These additives counteracted the efficacy of the sizing, though, causing the paper to become more absorbent. At the same time, the addition of alum caused the paper to become acidic. Consequently, paper that was sized on a Saturday will often have dark grayish brown discoloration to it.

A watermark is a symbol or lettering that becomes visible when the paper is held up to transmitted light. The watermarks were often added by the papermakers and could include the name of the mill or a symbol or crest to represent them. The mark is made by bending a small wire into the required shape, and “sewing” it onto the laids or the metal screen. As the handmould was dipped into the fibrous water, the paper would be thinner over the wire than across the rest of the mould. 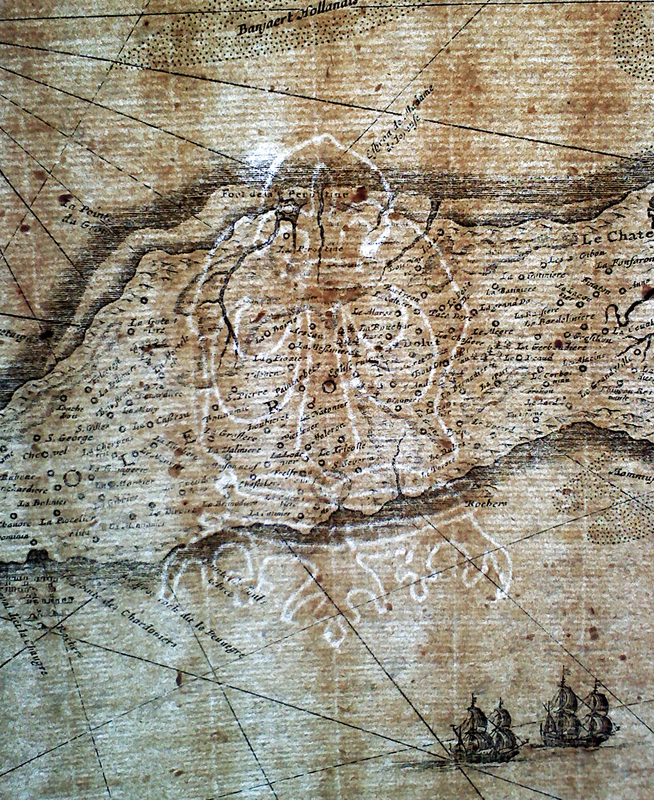 A watermark, with the crowned fleur-de-lis, is visible on this map.

Papermaker’s tears are a blemish that can be found in antique laid paper. Once the sheet was pulled from the vat, papermakers were careful to not drip any water onto the newly formed sheets. Should a drop land on the new paper, it forced the fibers apart, causing a small disturbance in the weave of the paper. These “tears” are a thin spot in the paper, but rarely result in a hole. 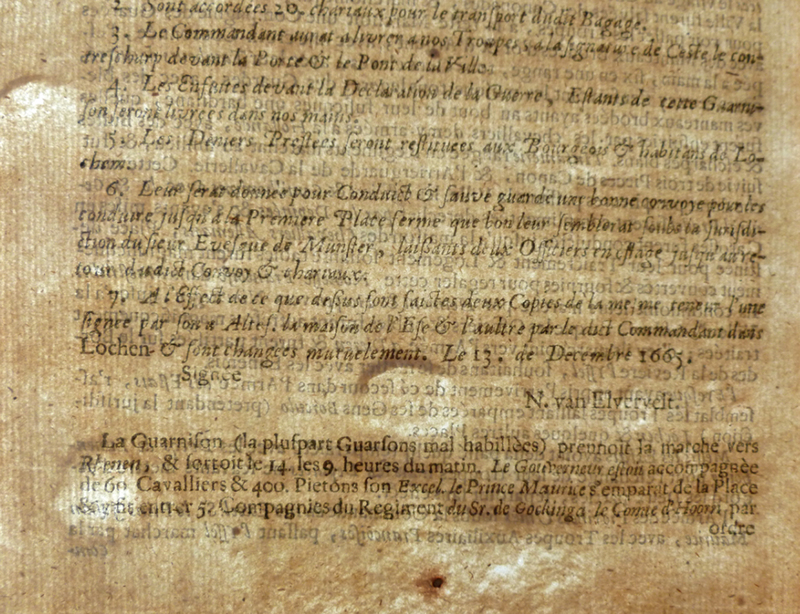 Understanding the map printing process used during the first half of the 17th century was paramount for analyzing the maps throughout the course of our research project. Two methods of printing were common at the time, relief and intaglio. The maps in this exhibit were all printed using the intaglio method and copper plates. The intaglio method involved removing metal from a copper or zinc plate, creating grooves which would hold the ink. One of the advantages of this method was that intaglio engraving allowed for finer lines and rounded lettering, and made for easier correcting as well. One clue to identifying if a map was reproduced using copperplate printing is by finding the indented plate marks, which mark the edge of the plate, and are visible just beyond the map border. Engraving was a highly skilled profession and art form that involved transferring the cartographer’s original hand drawn map to the plate. First, a thin layer of wax was applied to the surface of the plate and then a burin was used to engrave the image into the plate in reverse (see A below). Sometimes, lines from the original map would be transferred to the plate by pricking holes and rubbing chalk through the holes onto the plate, creating a line which would later be engraved.

Before printing, the plate would be heated to help the ink flow freely into the engraved lines and lettering (B). It was then inked and wiped clean so that the ink remained only in the grooved engravings of the plate (C). As it took around 20 minutes to re-ink a plate, other plates were inked simultaneously and made ready to be put on the press once the previous print was finished. The paper was moistened or “sized” to better hold the ink, then laid and pressed onto the plate with great force by the rolling press (D). The freshly printed map was then hung to dry (E) and once dry would be put in a press to be flattened. It was possible to get one to two thousand impressions from a single copperplate, though parts of the image would have to be recut throughout the plate’s life cycle to achieve that many impressions. Some plates would be reworked with updated information or authors’ names (Woodward, p.597). 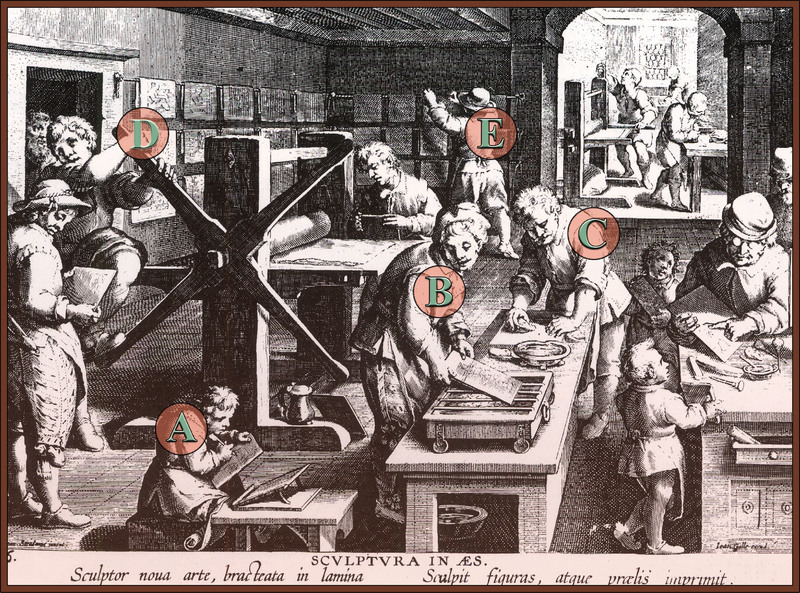 A view of a 17th century print shop.

Baker, Cathleen A. From the Hand to the Machine: Nineteenth-Century American Paper and Mediums: Technologies, Materials, and Conservation. Ann Arbor, Michigan: The Legacy Press, 2010.

Woodward, David. “Techniques of Map Engraving, Printing, and Coloring in the European Renaissance”. From History of Cartography, v.3, pt.1.

Maps in the Low Countries