I invented my PIXEL Technique to bring diverse people together in the production of fine art. Connect the Dots: Collective Interpretations from the UM Library Collections PIXEL Project marks my first time working directly with a library system to create large-scale public art.

Hundreds of people representing all ages, primary languages, skill and experience levels, locations, and backgrounds helped in the actual production of this series. My work with librarians highlights the librarians’ role as connectors. Librarians connect us. They help us to learn more about ourselves, our culture, our history and our future. 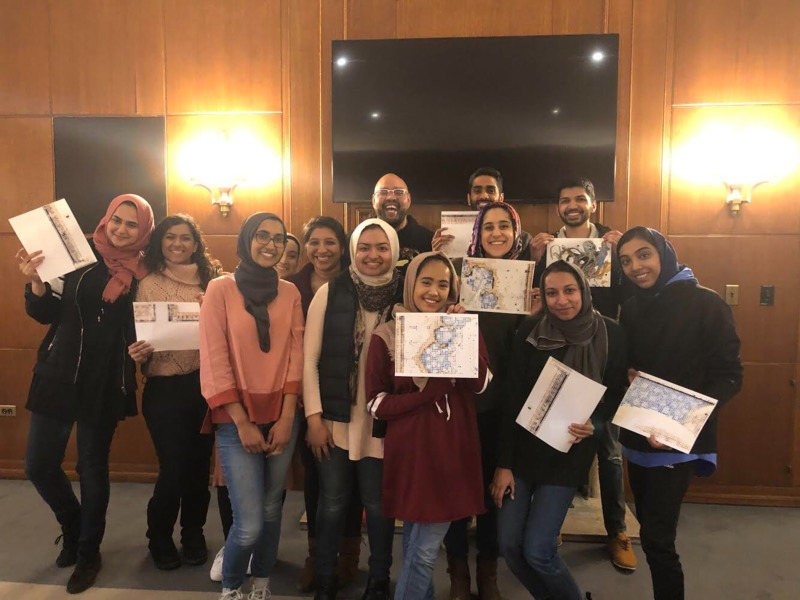 The image above features Doug Jones with a group of students from a creative session with the Muslim Student Association. The students are holding up what they had created during the session and Doug Jones is standing in the center behind the students.

Connect the Dots: Collective Interpretations from the UM Library Collections PIXEL Project spans history as we know it across time and space. It spans the history of science, draws upon historical religious texts, and includes artifacts that remain alive inside contemporary politics and social justice movements across forms of government. Ultimately, this series represents UM’s stewardship of priceless treasures that belong to all of us. Our libraries connect us to unfathomable amounts of information as diverse in scope as we are. Our libraries as built environments are always evolving. Still though, the library remains a local resource for discovery and imagination. Each visitor is permitted access by the library to interpret the collections through a unique lens, to take those discoveries and to then do something with them, even if just to imagine something as never before.

I worked with Emily Puckett Rodgers, Jamie Vander Broek, Alan Piñon, Liangyu Fu, Marissa Conté, Pablo Alvarez, Rebecca Price, Alexandra Rivera, Evyn Kropf, Kai Donovan, Scott Martin, Justin Jocque, and Julie Herrada to uncover and to develop source material for the project. Our conversations led to the inclusion of several experts within the UM community, including Dr. Emily Wilcox (Associate Professor of Modern Chinese Studies and Director of Graduate Studies in the Department of Asian Languages and Cultures) and Dr. Stephen Smith (Associate Professor of Ecology and Evolutionary Biology and Associate Chair for Undergraduate Studies). We chose 11 final images that represent approximately 13 million UM Library assets, including the largest Chinese Dance Collection outside of China, an original copy of Andreas Vesalius’ De humani corporis fabrica/On the Fabric of the Human Body published in 1543, and a predecessor to modern GPS, a 1951 Sanborn Map. Each work, from the 17th Century Turkish Hilye (Islamic Manuscripts) to early 20th Century French Pochoir (Special Collections), allows us explore the meaning behind each object, to look beyond the superficial surface.

I would like to give a special thank you to Emily Puckett Rodgers whose vision made this possible. I would also like to thank Sydney Hawkins, Gunalan Nadarajan, James Hilton, Rebecca Dunkle, Tashia Munson, Stephen Griffes, Jasmine Pawlicki, Daniel Pachman, Cornell Sample II, Omari Rush, Joe Salvatore, Bill Bresler, Mike Michelon, and the Ann Arbor Summer Festival. I dedicate all of this work to the memories of Elizabeth Thompson, Nidhi Suri, and Kasey Passen, friends that I made as a student at University of Michigan and whose separate visions also helped to make this series possible.