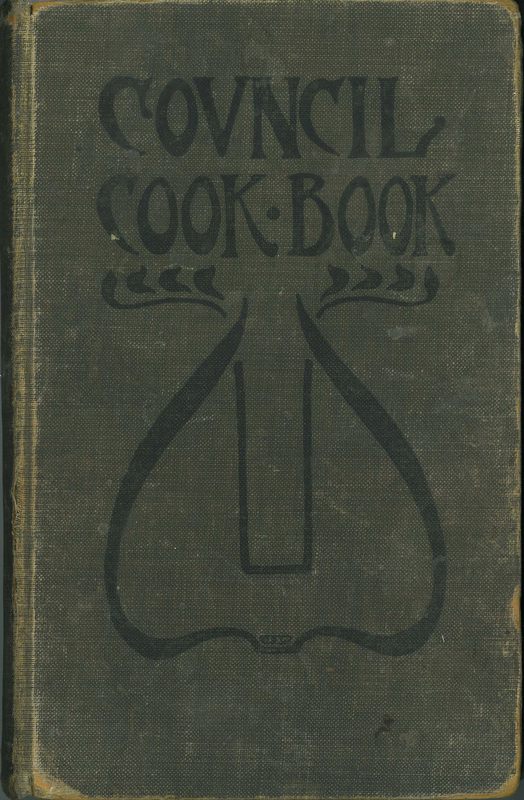 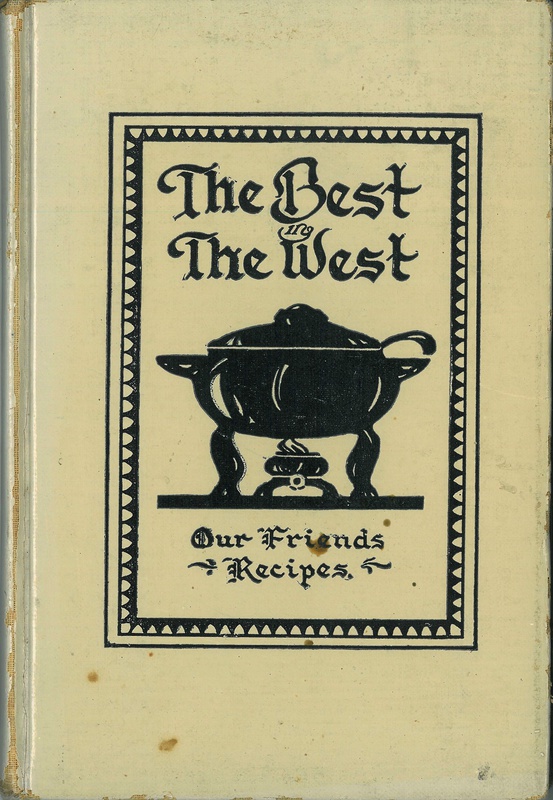 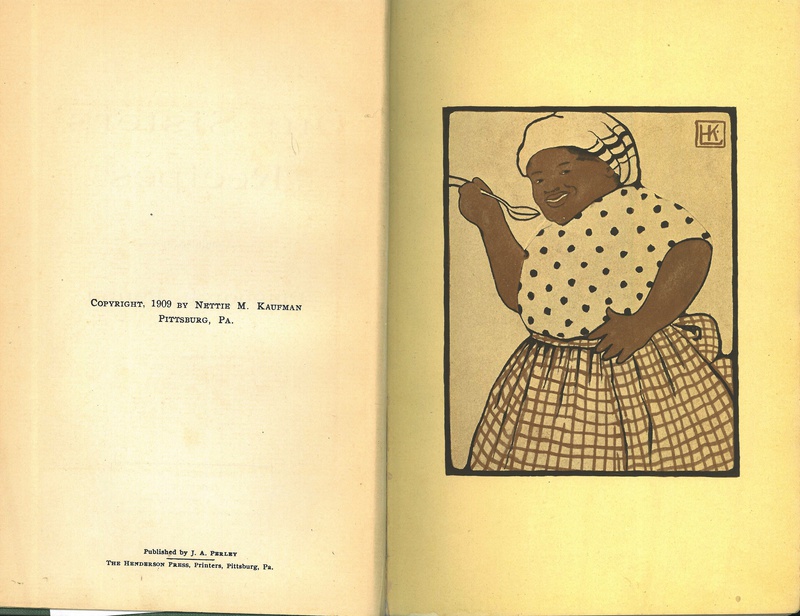 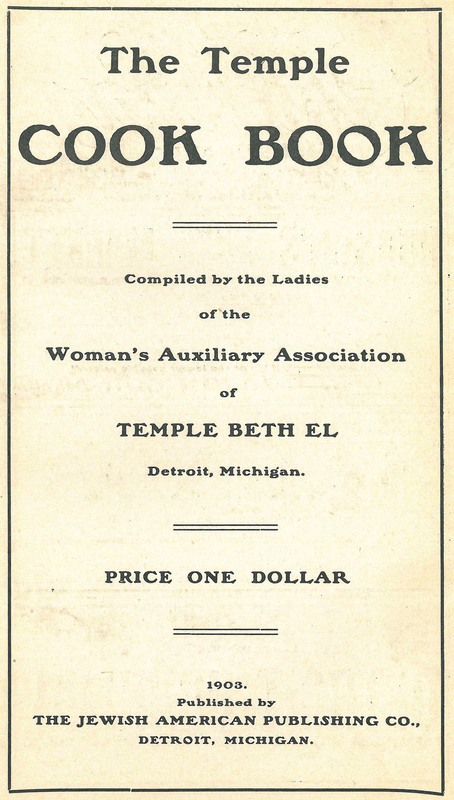 The earliest known Jewish charity cookbook was published in Denver, Colorado, in 1888 by the ladies of Congregation Emanuel. This book was produced to complement the fair that the community put up to raise money for their new building.

This item is a facsimile of the original item, whose whereabouts are no longer known. Several years ago, the only known copy was stolen from a museum exhibit. Fortunately, a copy was made. This facsimile was donated to the JBLCA by the Penrose Library at the University of Denver.

We may never know when or where the first Jewish charity cookbook was published, but as the earliest known item, this book emphasizes the recognition of Jewish food as a means of effective fundraising very early on. 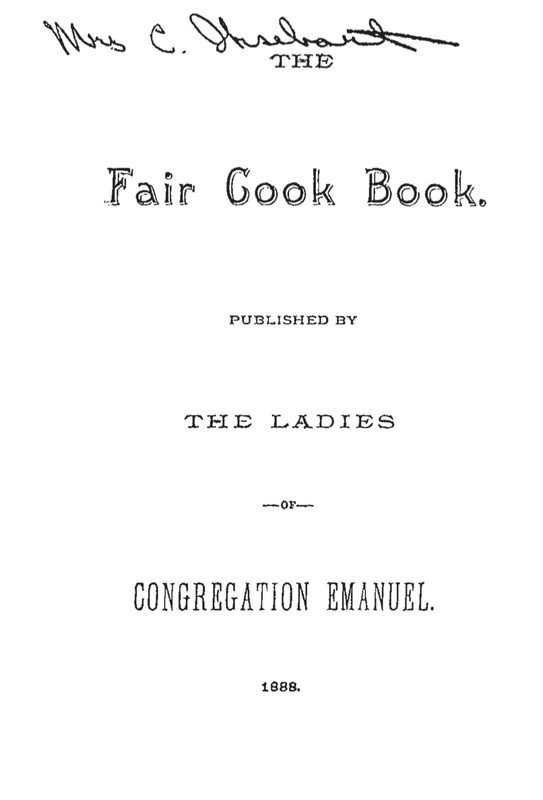 The Way to a Man's Heart, "The Settlement" Cookbook

The Settlement Cookbook is quite possibly the most well-known and effective (Jewish) charity cookbook. Having sold over 2 million copies through more than forty editions, this book has made its mark on American foodways. Originally produced by Lizzie Black Kander and of Milwaukee, Wisconsin, for the benefit of the Settlement House, this book has continued to raise funds for all Milwaukee charities. Never explicitly Jewish, and until most recently, always recognizably so, this Jewish cookbook translated traditional, Ashkenazi culinary culture to the American people.

As a Wisconsin charity, this cookbook was most well-known in the Midwest, but has been found in as faraway places as Hawaii and Maine, not to mention countless communities outside of the United States. 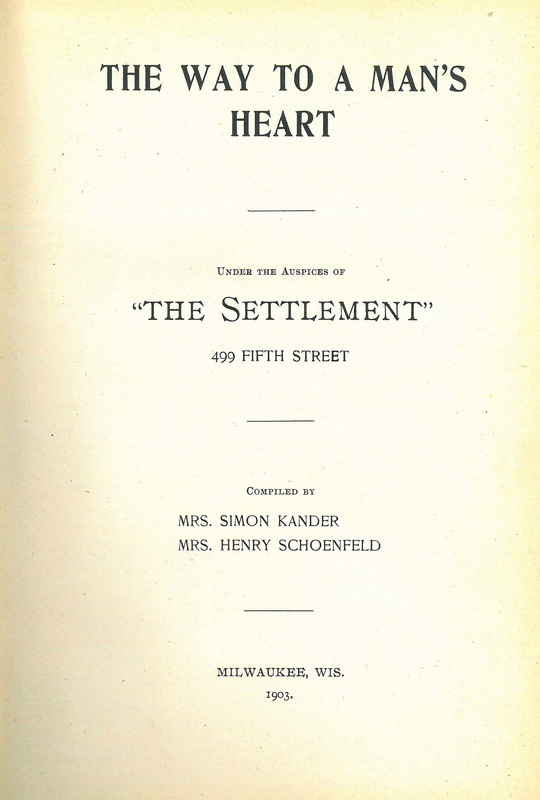 This is the first Jewish charity printed in Michigan, and the second oldest surviving original American charity cookbook. Produced by the forerunner to Temple Beth El’s Sisterhood, this book was printed to raise money for the congregation’s new building on Woodward Ave, designed by a congregant, the young Albert Kahn. This building is now Wayne State’s Bonstelle Theatre.

This is the first Jewish cookbook published in Washington.  It is clearly non-kosher, with many shellfish recipes.  See the 1916 enlarged printing of this book for more images and representations of this rapidly developing community. 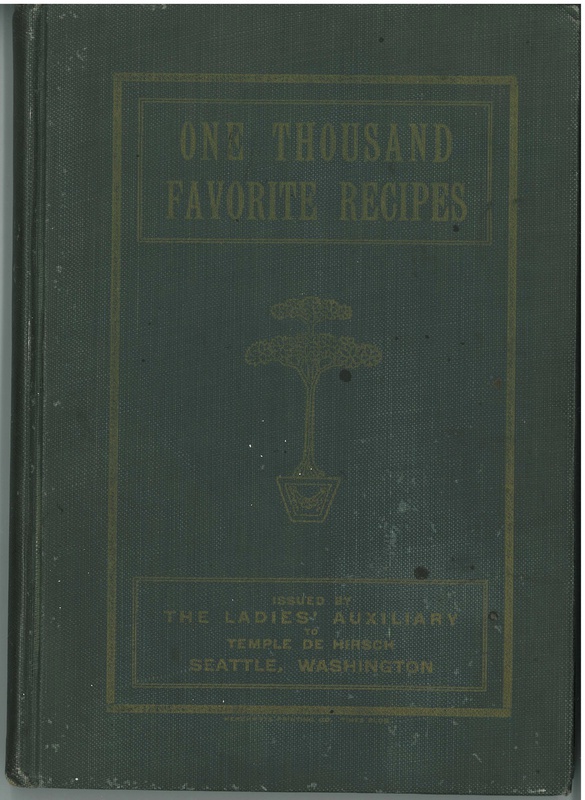 This is the first Jewish cookbook published in California.

The frontispiece image seen here persists without explanation. It is unknown why this image was used to adorn this charity book: some conjecture that she was the synagogue cook, others that this was used to denote the homely quality of these receipts.

Another interesting element of this cookbook is the inclusion of a recipe for a "Delicious Easter Pudding." In addition to a name that, today, sounds out-of-place in the context of Jewish cookbooks, this recipe is verbatim from the 1903 Temple Beth El cookbook (it is also attributed to Mrs. Louis Blitz of Detroit, Michigan). Many of those original cookbooks are revised, reprinted, or used as inspiration and source material for these "second generation pioneers."

The preface to this book offers a heartwarming introduction to the importance of charity and the hope for this cookbook. This book is a continuation of the 20+ years of pre-existing work that this charity has done for the community and the growing Jewish immigrant population. While not explicit in the projects previously undertaken or the day-to-day work done by this charity, this preface makes a compelling argument for people to support this charity and do their part in assisting those in need.

Looking at the advertisements, one can see the sheer diversity of businesses patronized by this community. There are kosher delicatessens and butchers, scores of garment-industries, wine and liquor merchants, and many more. 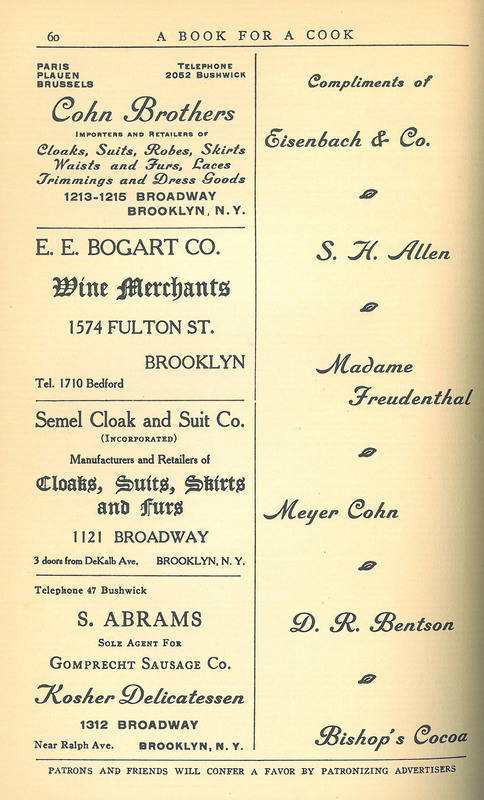 This cookbook is an iconic, early Jewish-American cookbook. Balancing a section of Passover recipes and other traditional items with a menu for a "Washington Birthday Luncheon" and many non-kosher items (e.g. Lobster and Yorkshire pudding, amongst many others). 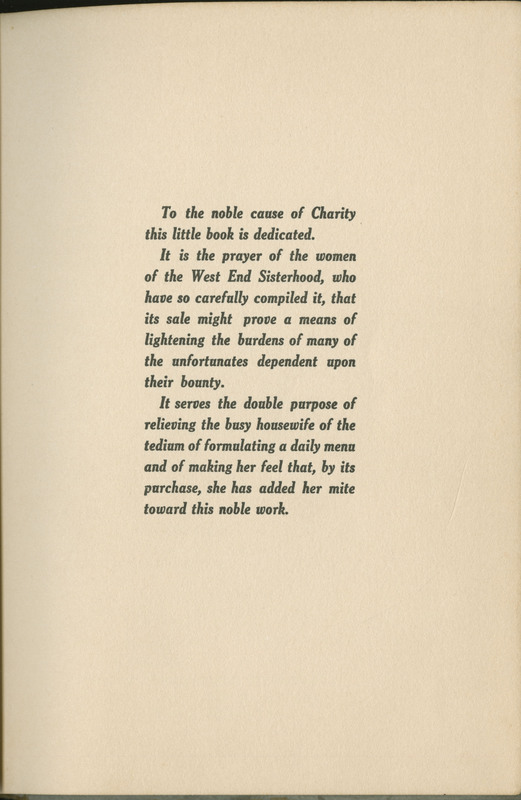 Written by Rebecca Leiter and Sara Van Bergh on behalf of Congregation Berith Kodesh Sisterhood, this cookbook was intended to be a “valued possession of every good housewife”. According to Publisher’s Weekly records, this cookbook initially sold for $1.25. A revised and enlarged edition was published in 1925. 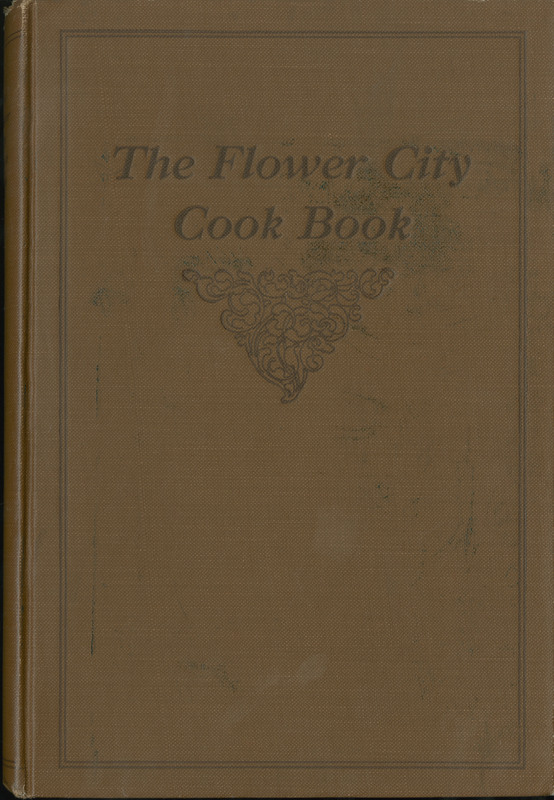 This early New Jersey charity cookbook has advertisements from across America, not just local vendors, which shows how important the national economy and global market was even in the early twentieth century. 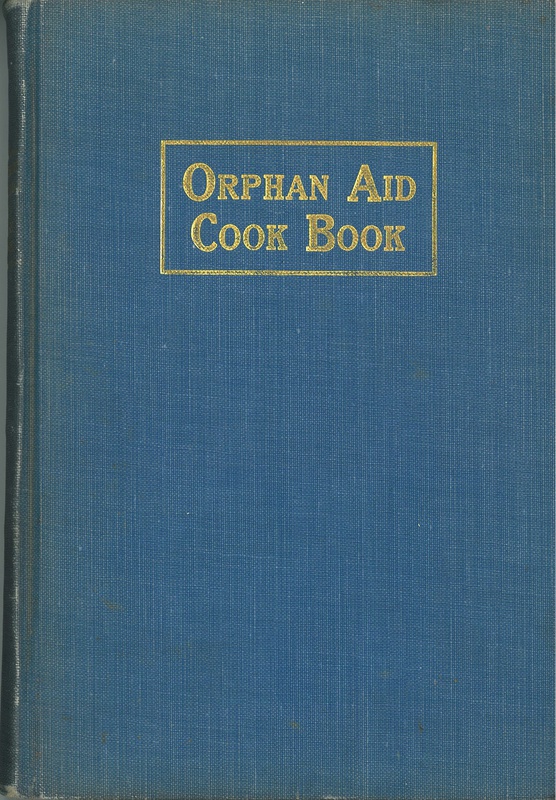 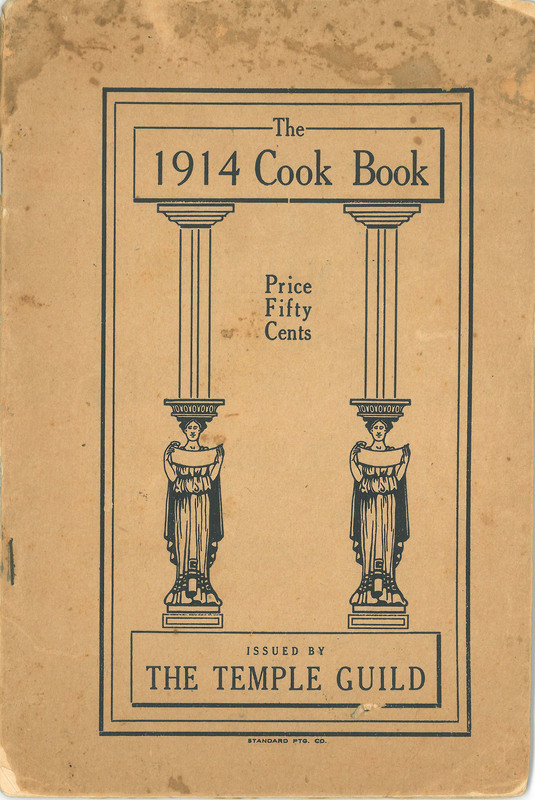 The first edition (1912) sold out very quickly, leading the ladies to publish this revised and enlarged edition. There is also a 1932 edition that is part of the 50 states charity cookbook collection. 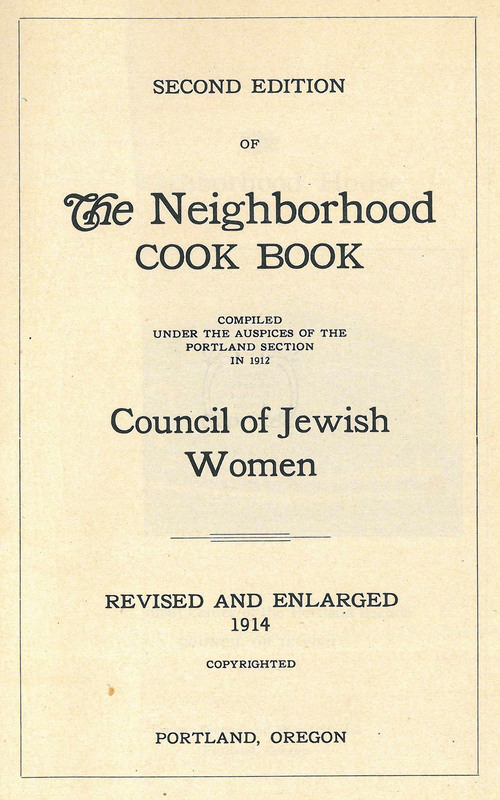 See the 1908 first printing of this book; this is an expanded and revised edition. 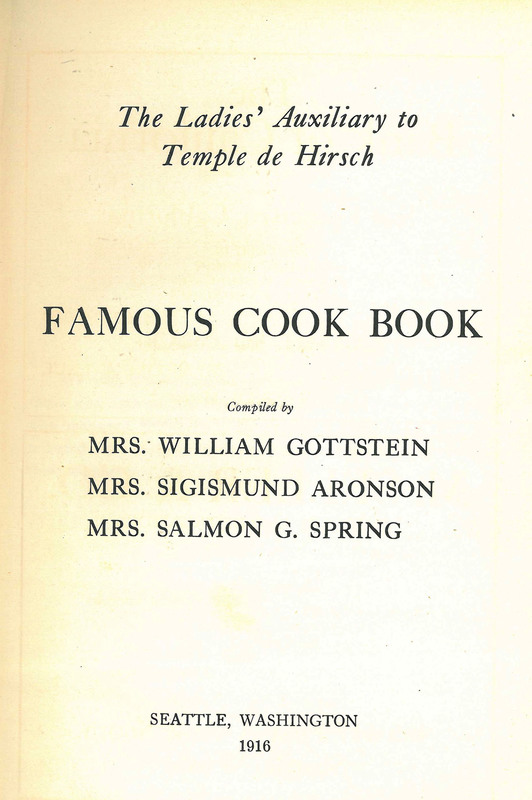 This small and fragile item is a rare survivor. We imagine many of the early charity cookbooks to have been printed on similar materials, which is why they are so hard to find. Like Aunt Babette's, and others of this era, the Passover dishes are listed as Easter recipes.

Coming to the end of the largest era of Jewish immigration to America, this cookbook, like many others in the pioneering years, tried to orient these new immigrants to America. In using English (i.e. Easter) and not Yiddish terms (i.e. Pesach), these cookbooks helped assimilate and Anglicize immigrant Jews. 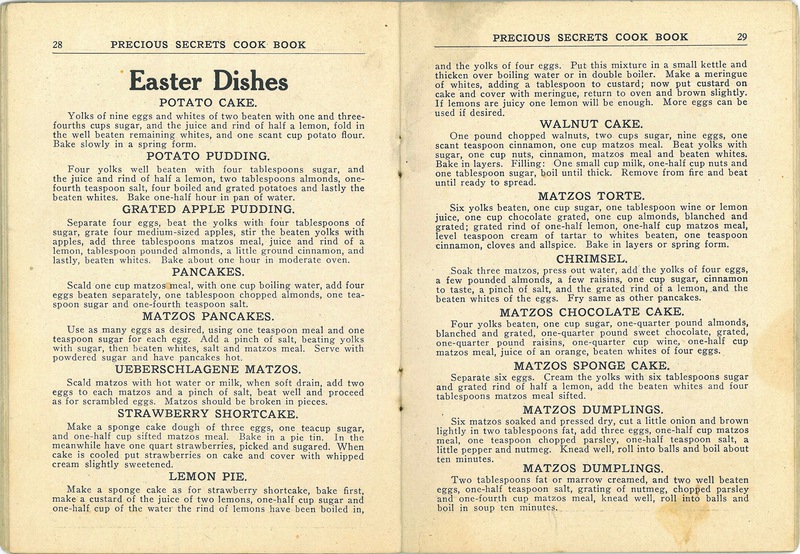 This rare item does not have very many Jewish references. However, there are eight distinctly Jewish recipes, including "Mohn Kipfel" and Purim Kusselich." No affiliation (religious, institutional, or other) is listed.

This cookbook comes from one of Boston's oldest congregations, Temple Mishkan Tefila.

One of the more interesting items in this cookbook is the first recipe in the bread section, which is for a "Plain White Bread" that is parenthetically understood to be "hallah," the traditional Ashkenazi egg-bread baked for holidays. This recipe calls for no egg, a scant amount of sugar, and a small amount of shortening (which the recipe encourages to be "butter"). Furthermore, instead of warm water to proof the yeast, the recipe calls for boiling water, which can kill the yeast and prevent the dough from rising if one does not read the recipe appropriately. This recipe is a very economical recipe that would do well for families who would be unable to obtain enough eggs, sugar, and shortening for a more traditional holiday loaf. 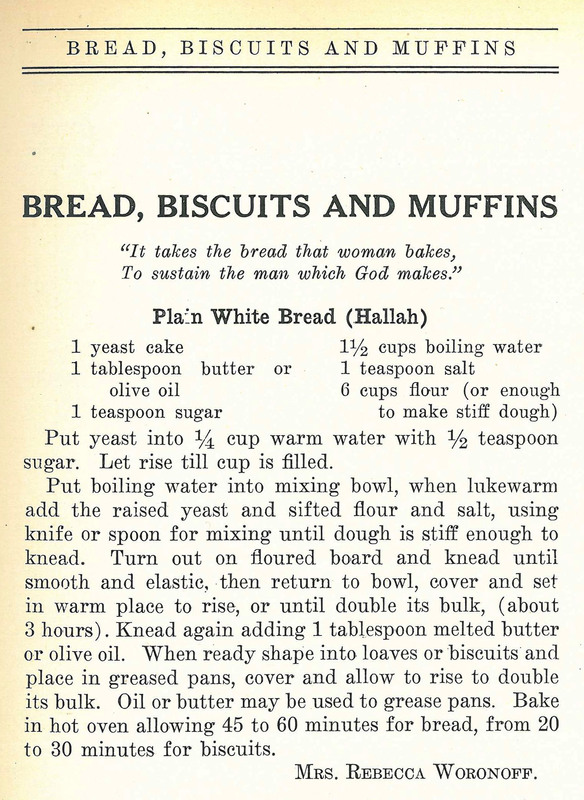 Like many Yiddish-language books of the era, many of the recipes are titled with Yiddish transliterations. Also included in this book are advertisements for American foodstuffs in both English and Yiddish. In reaching out to a Yiddish-speaking market, these food purveyors were hoping to capitalize on this new consumer-base. There are advertisements for Kellogg's Protose and Savita, as well as Marshak's Maltomilk, and local bakeries, to name a few. 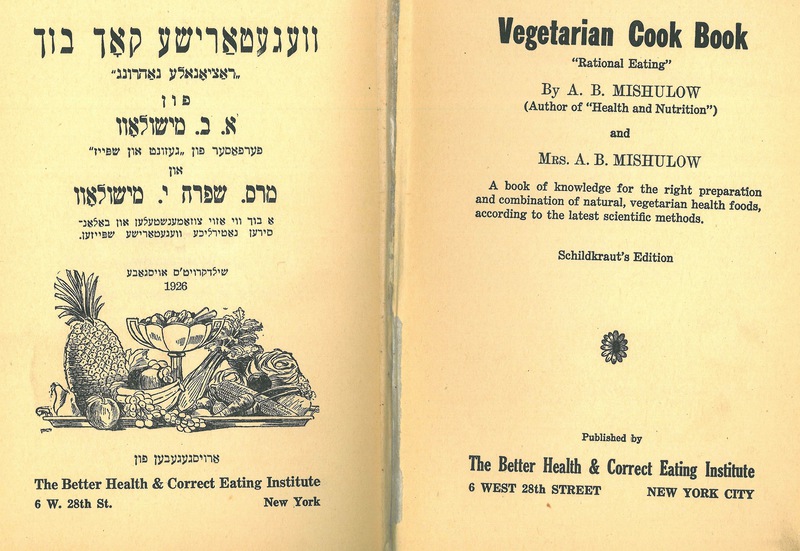 In addition to Jewish recipes, there are many local ads of interest in this book. It includes an advertisement for Weintraub's, the most popular delicatessen in Worcester at that time. 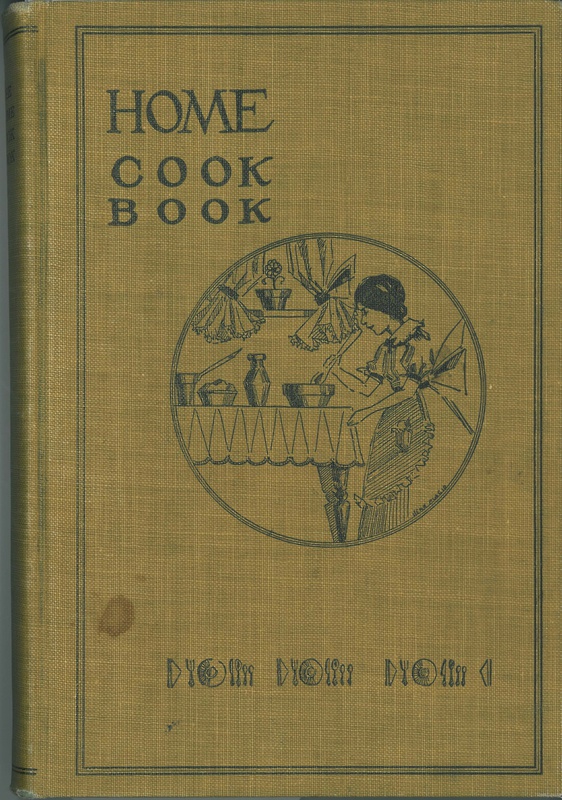 This cookbook is a beautiful example of the importance of charity and community, with a full page explaining the history and accomplishments of Hadassah efforts as well as full recognition of the cookbook committee, who donated not just their recipes, but also their time and energy to make a difference with Hadassah. 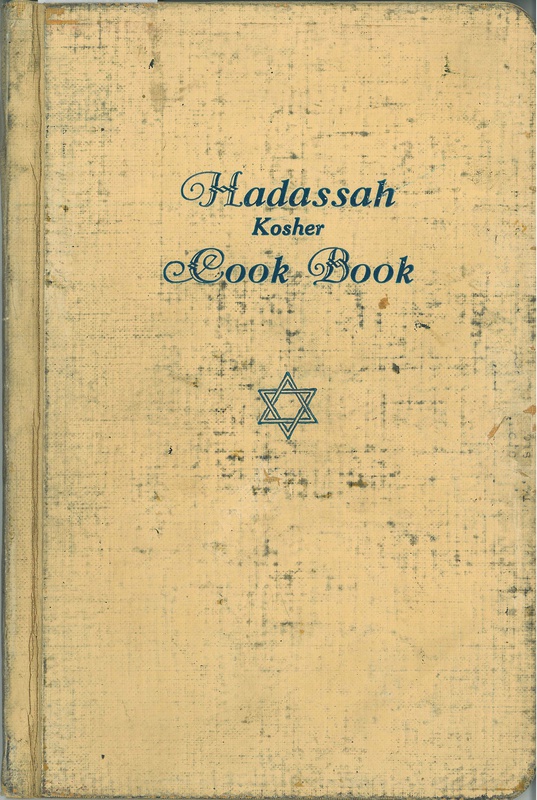 This non-kosher charity cookbook has a very interesting ad inviting people to enjoy the market and restaurant on the street level, as well as the upstairs Chinese restaurant, which were located three doors down from a delicatessen.

If you click on the cookbook image, you will be able to see a street scene from the 200 block of South Broad Street in Philadelphia (courtesy of the Philadelphia City Archive). This image, from the same year this book was published, is a rare and beautiful representation of the ethnically diverse neighborhoods in early 20th century America.

Another interesting element of this cookbook is the stark difference between the cover and book title. As one can see on the image to the right, this cookbook is the Philadelphia Cook Book. However, upon opening the book, the title page presents this book as Favorite Recipes. Many early charity cookbooks used similar titles like "favorite recipes" as their titles, so the distinct hardcover title could be a way for the community to distinguish this book, a book of "favorite recipes" from a Philadelphia community, from other cookbooks. 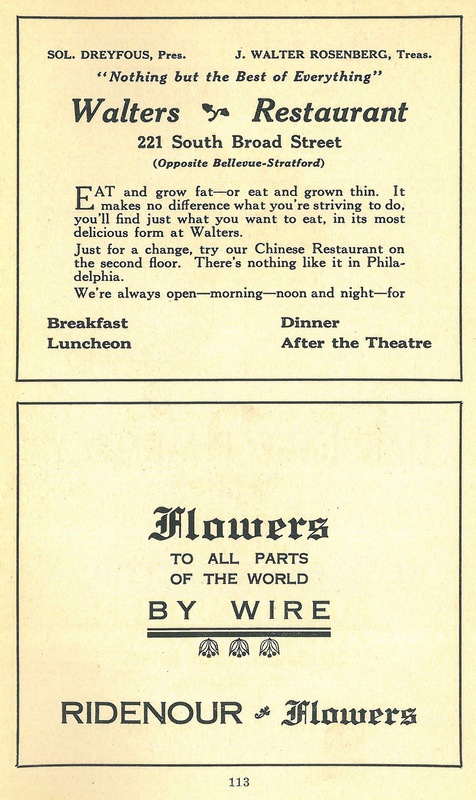 Charity Cookbooks from All 50 States