This beautiful map was published by the Homann heirs, successors of the prolific German map publishing house created by Johann Baptist Homann (1664-1724), Imperial Cartographer to the Holy Roman Emperor Charles VI.  It is especially noted for its wonderful decorative cartouche but the map itself shows the coastal areas in great detail and includes flags to denote the claims of various European powers. 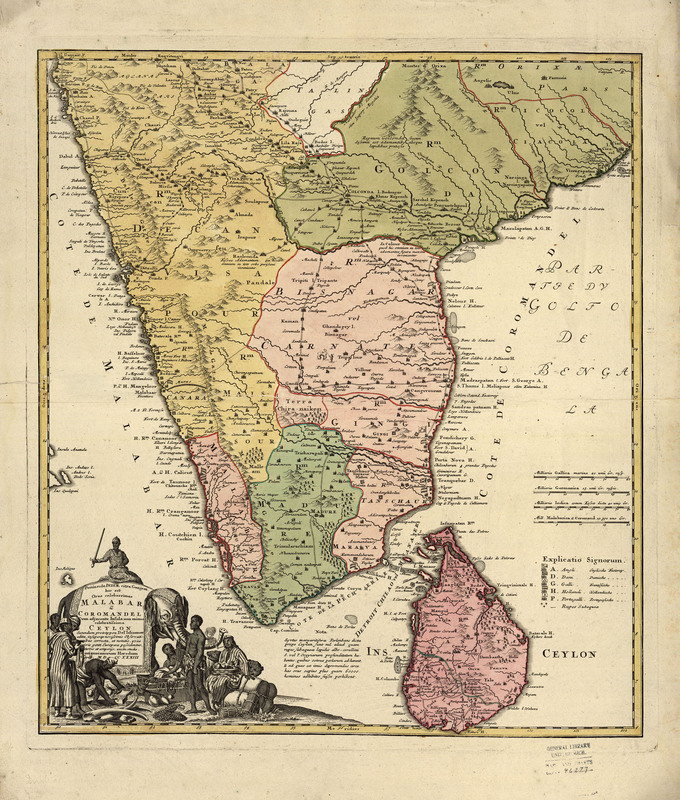 A map of Bengal, Bahar, Oude & Allahabad : with part of Agra and Delhi, exhibiting the course of the Ganges from Hurdwar to the sea, 1786

This is William Faden's re-engraved version of Rennell’s map and was published in Faden’s General Atlas, 1811. This copy was received on October 30, 1969 from Michigan Governor G. Mennen Williams who had received it as a gift in 1953 from Chester Ellison of Ellison Book Shop, Lansing, Michigan. 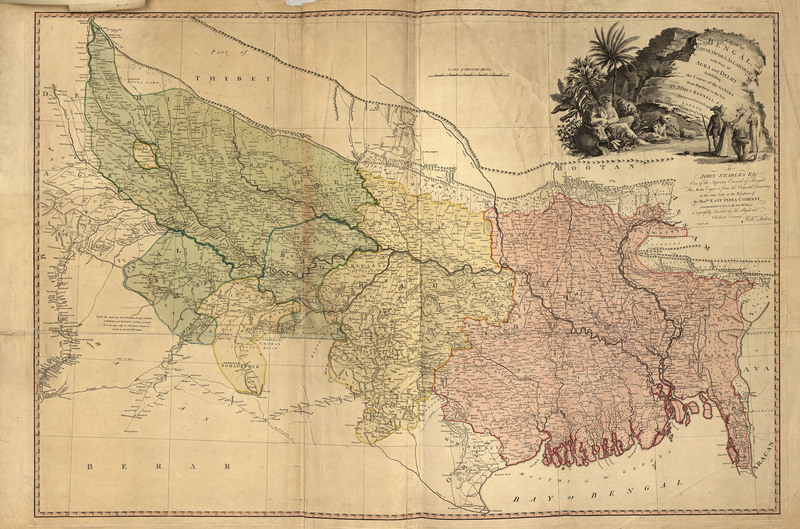 This beautiful map is orientated to the east, with Paris as the prime meridian. Around the edge are insets of 19 fortresses controlled by the French, the English, or the Nawab of Arcot. It also shows battle sites and notes commanding officer, year of battle, and outcome. It is one of the most finely hand colored maps in collection. 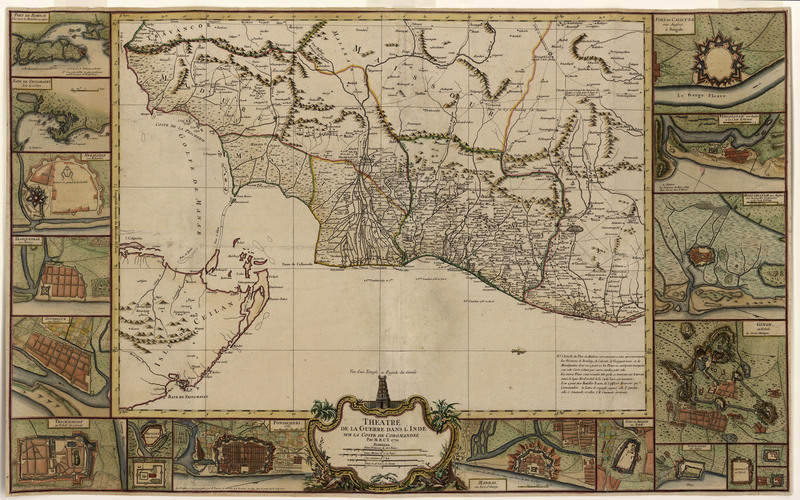 A map of the north part of Hindostan or a geographical survey of the provinces of Bengal, Bahar, Awd, Ellahabad, Agra and Delhi, 1794

The map is based on Rennell’s work as Surveyor General of the East India Company and was by far the most accurate and detailed map of the region to date. It was published in Thomas Kitchin’s A New Universal Atlas, Exhibiting All the Empires, Kingdoms, States, Republics, &c. &c. in the Whole World... 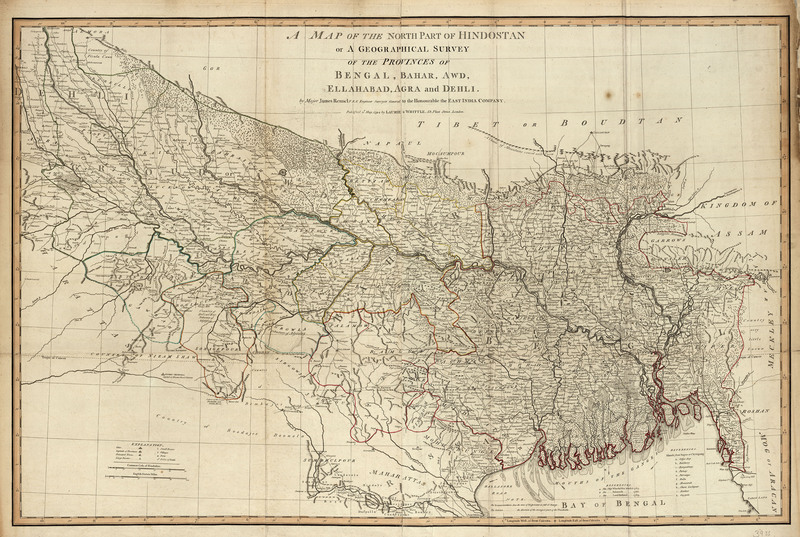 A map of the provinces of Delhi, Agrah, Oude, and Ellahabad: comprehending the countries lying between Delhi and the Bengal-provinces, 1786

Rennell’s map of 1777 was republished by Robert Sayer in 1786, exhibited here.  It is also available in an electronic version (the bottom half only) via the Internet at: http://nla.gov.au/nla.map-rm183. 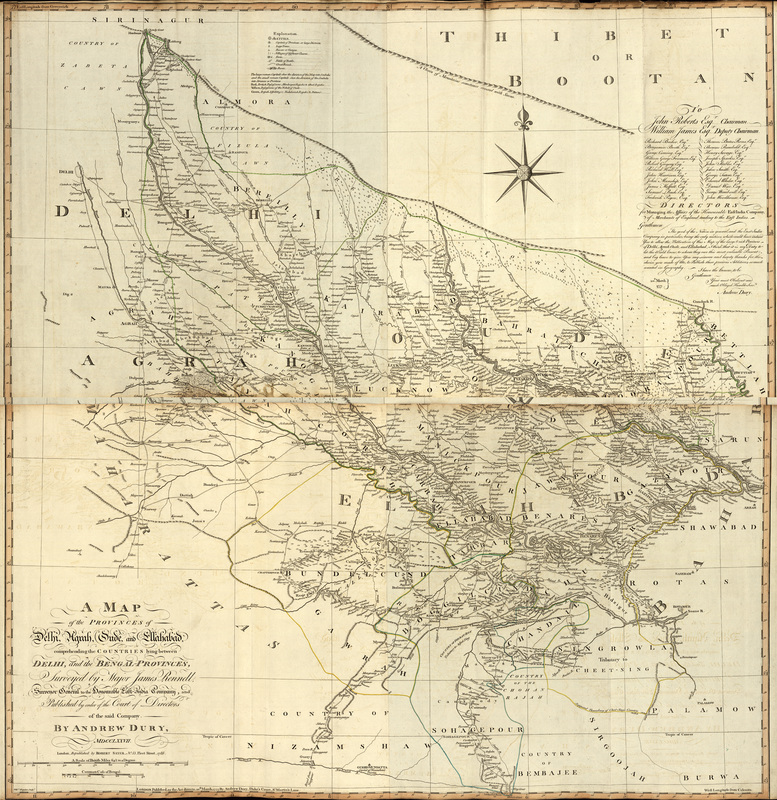 A Bengal atlas: containing maps of the theatre of war and commerce on that side of Hindostan, 1781

Rennell, began his survey of Bengal in 1764, became Surveyor General for the East India Company in 1767, and spent the next 10 years carrying out his survey of an area of about 3000,000 square miles, an area slightly larger than the state of Texas. The Bengal Atlas, first published in 1779, was the culmination of this work and was critical for commercial, military and administrative activities. Rennell’s maps were the most accurate ones of the area for the next sixty years.  Our copy of the atlas bears the name Mr. Bosanquet stamped in gold on the cover. Jacob Bosanquet (d. 1828) was a director of the East India Company and served as its chairman on three occasions between 1798 and 1812. 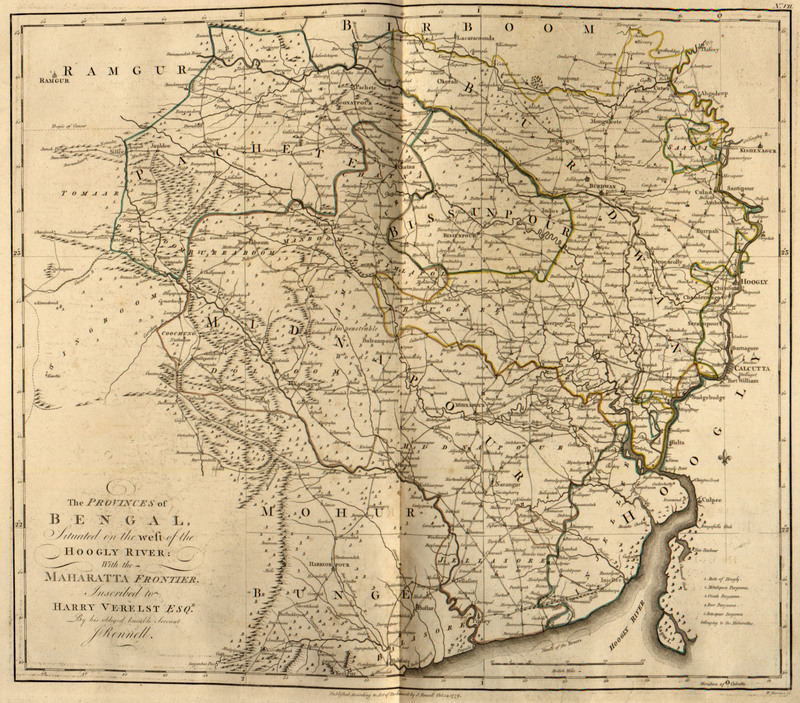 A map of Hindoostan, or the Mogul Empire: from the latest authorities, 1788

This second state of Rennell’s map shows the extent of British geographical knowledge of South Asia and remained the zenith of maps of India for many years because of its detail and accuracy. It is dedicated to Sir Joseph Banks, the esteemed naturalist who travelled with Capt. James Cook on his first voyage, and gained fame for his discoveries of plant and bird species as well as for the promotion of science, especially in his role as President of the Royal Society. 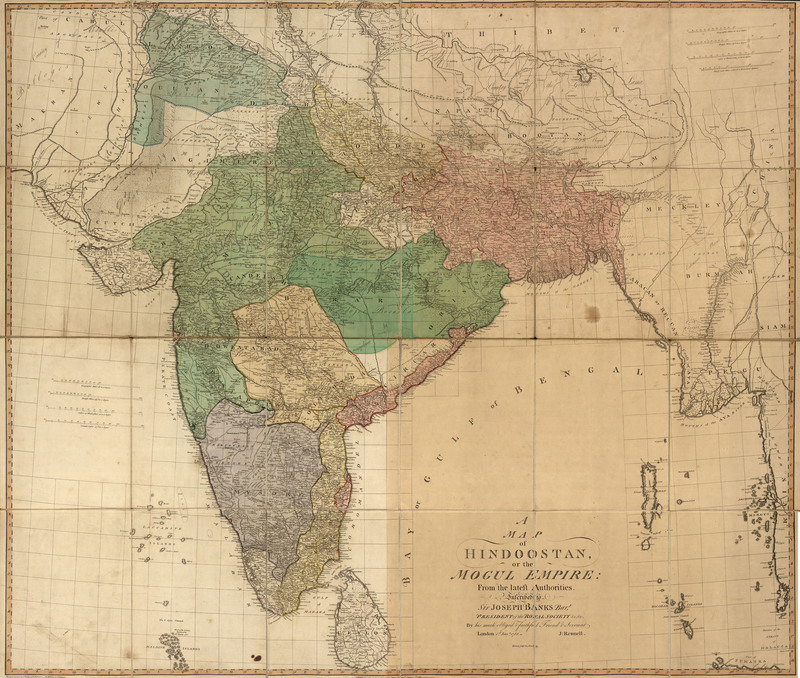 Memoir of a map of Hindoostan; or, The Mogul empire: with an introduction, illustrative of the geography and present division of that country: and a map of the countries situated between the heads of the Indian rivers, and the Caspian Sea, 1792

This was written to accompany his very large map, Hindoostan. Rennell describes the critical editing and the many corrections that he made for this new map of India. He relied on native sources of geographic information to update the Punjab region. This a later edition of the Memoir. 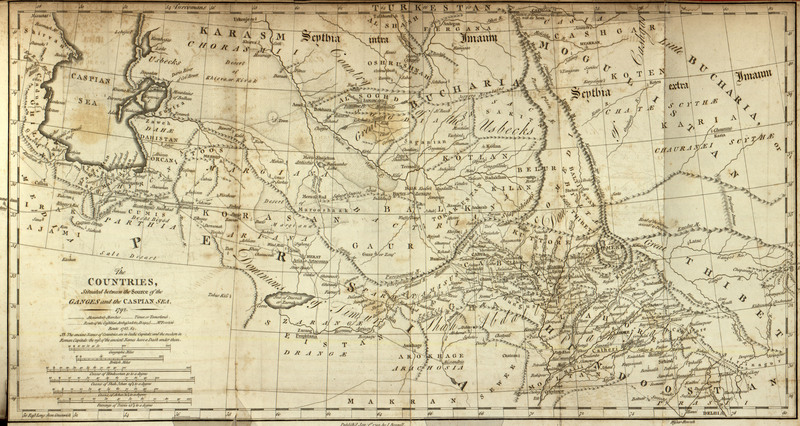