Given India’s ancient and advanced mathematical knowledge which allowed for relatively accurate calculations of the Earth’s circumference, and their use of latitude and longitude, it is likely that indigenous mapping did exist prior to European contact. Some Chinese travelers went to India in search of information about the Buddha and understood the basic geography of India by at least the 2nd century, BCE. A Japanese map done in an earlier traditional style in 1709 shows the 7th century trek of the Buddhist pilgrim Xuanzang in India. Eratosthenes (275-194 BCE), the Greek geographer and Chief Librarian of the Library of Alexandria who accurately calculated the Earth’s circumference, is said to have gained extensive knowledge of India, but no maps showing his knowledge are known to exist. A reconstruction of his world map does show the Indus River. The Geography of another Alexandrian geographer Claudius Ptolemy (90-168 A.D.) is the most well-known early work on geography. In his Geography he describes a world map and twenty-six regional maps of Europe, western and southern Asia, and northern Africa. Geography was translated into Arabic and used by the North African born Arab al-Idrisi as a source for his famous map of 1159. 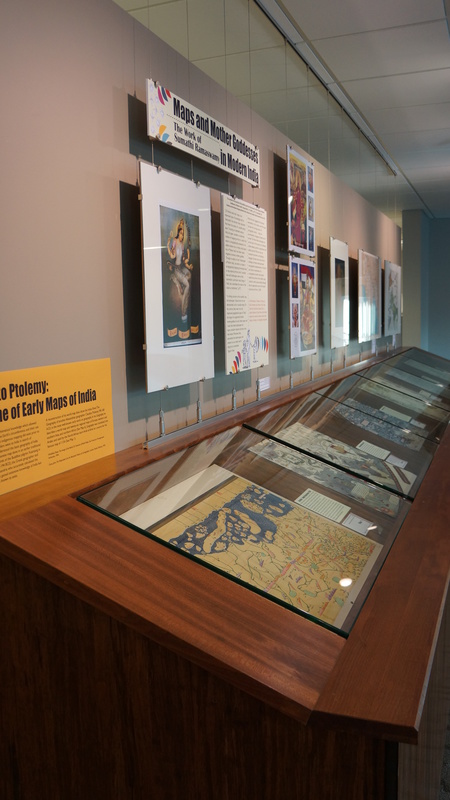 Al-Idrisi was born in Morocco, travelled in North Africa and Europe, and entered the service of Roger II King of Sicily for whom he made this map as part of The Book of Pleasant Journeys to Faraway Lands also known as The Book of Roger (Tabula Rogeriana). Arab geographers had translated Ptolemy’s Geography by the end of the 9th century, 600 years before it was done in Europe. Along with travelers’ accounts, it was a source of information for al-Idrisi’s maps. This is only a small section of the larger map; it is oriented with south at the top and, unlike descriptive Medieval European maps that are filled with imagery and text, it is solely concerned with portraying the geography of the Earth. His maps were the most accurate maps of the known world for three centuries. 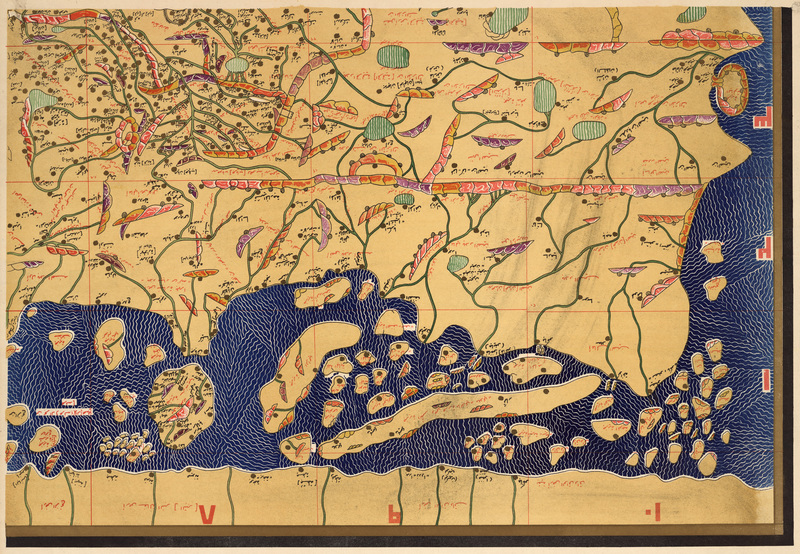 This curious and colorful map from an unknown author is a great example of the meldings of the Medieval, portolan, scholarly descriptive, and Ptolemaic styles. There are the Medieval mappae mundi visual depictions of information, the Ptolemaic grids and orientation to the north, and the navigational rhumb lines of the portolans. The geography is much more recognizable than that of its contemporary, the Fra Mauro map. The depiction of India and all of Asia is much clearer. Much of the imagery is based on the descriptions of  Marco Polo’s and Niccolo dei Conti’s travels in Asia. 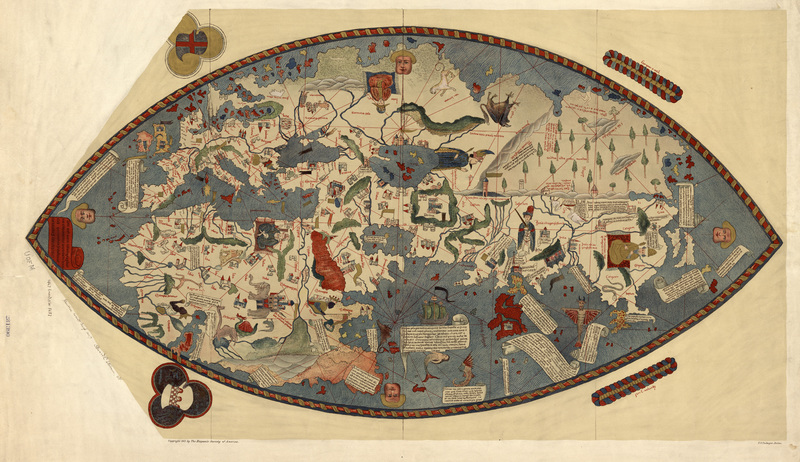 Fra Mauro’s map is an excellent example of the evolution of European mapping from the mappae mundi style to ones with greater influence of contemporary seas charts and Arabic geographic knowledge. Fra Mauro states in the map that the narrative of Marco Polo was a major source for information. Mauro was a monk in the Camaldolese monastery on the island of Murano in Italy, so his exhaustive descriptions are all based on travelers’ accounts. The descriptive elements of the mappae mundi are plentiful, but the map is oriented with south which is more common in Renaissance maps. The map is very large and measures over six feet in diameter. It was commissioned by King Alfonso of Spain who supplied him with the latest sea charts. You may be interested in the fictional account of the making of this map, A Mapmaker’s Dream. 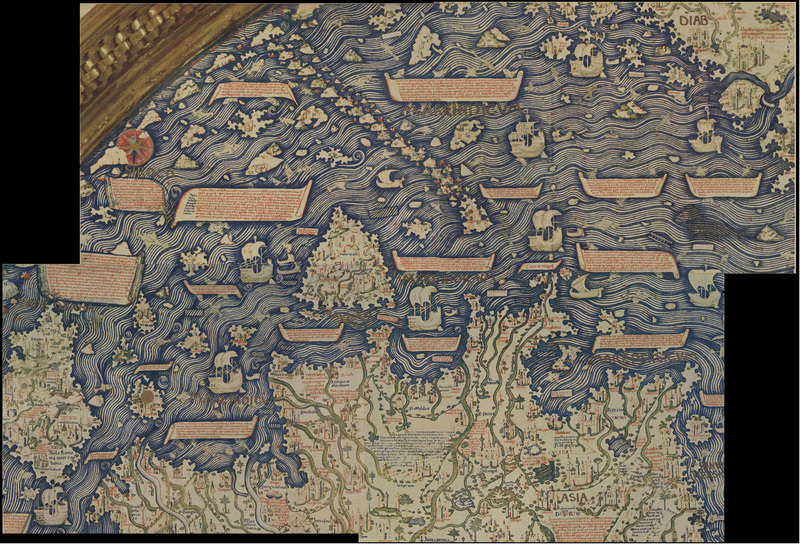 Jean Rotz, son of a Scottish nobleman, was a mariner and nautical chart maker of the Dieppe (France) school of mapmakers. This map of south and southeast Asia is oriented with south at the top. The map was part of a manuscript nautical atlas The Boke of Idrography was dedicated and presented to Henry VIII. 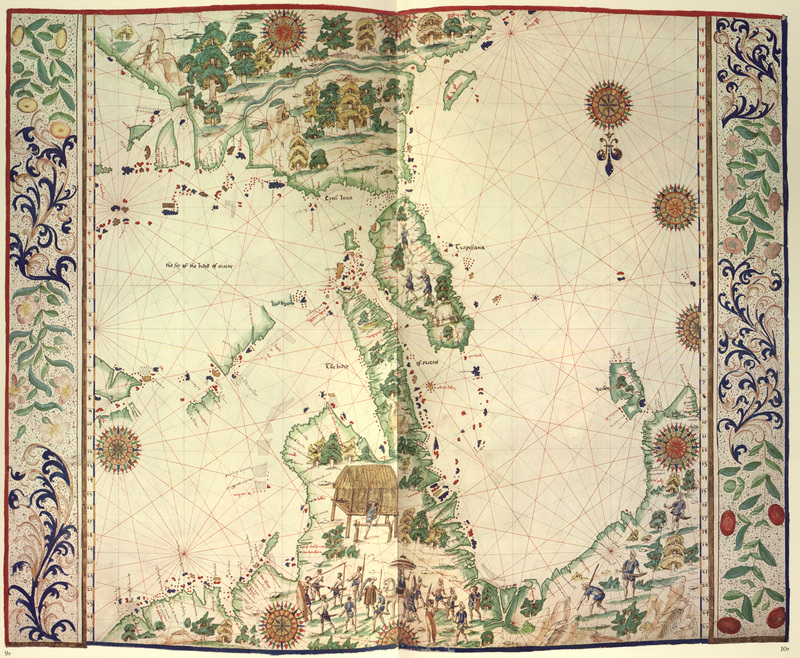 This map was created by Rokashi Hotan and is the first Japanese printed map to depict the whole world, though its focus is Asia with India at the center. This reproduced section of the map from our original copy shows parts of central Asia and India. Hotan based his map on the story of the Chinese Buddhist pilgrim Xuanzang’s travels in India. The map is done in the traditional Buddhist cosmographical style and includes the mythological Lake Anavatapta where the Buddha was conceived, and the Ganges, Indus, Bramaputra, and Sujei Rivers flow from the heads of a fox, elephant, lion, and a horse. 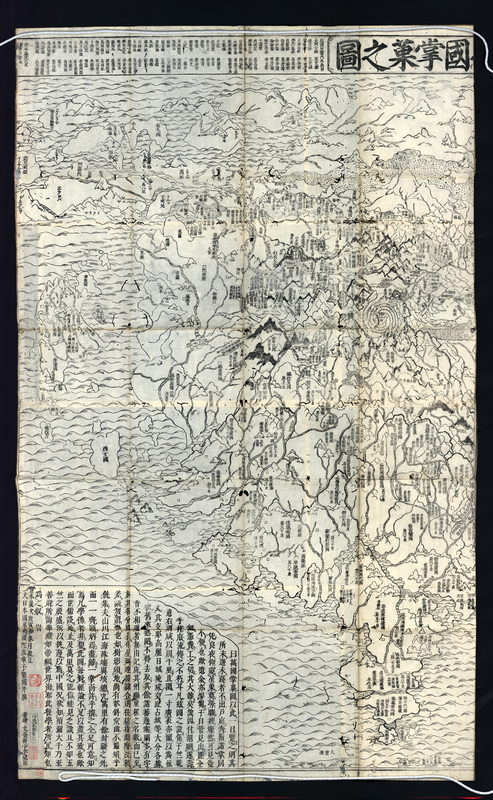 No maps of Ptolemy’s exist and it is uncertain whether he actually made any. The Ptolemaic atlases that were created based upon his writings were arranged in a consistent order based upon the textual arrangement and descriptions of Geography. There are twelve maps of Asia, and maps X, XI, and XII cover parts of what is modern day India. Taprobana, the name given to present day Sri Lanka and sometimes to Sumatra, was map XII. This is a reproduction from our original map from Gerhard Mercator’s version of Ptolemaic maps Orbis antiqvi tabvlae geographicae secundum Cl. Ptolemaevm. Mercator was best known for his revolutionary world map 1569 and his great Atlas Sive Cosmographiae (1585). 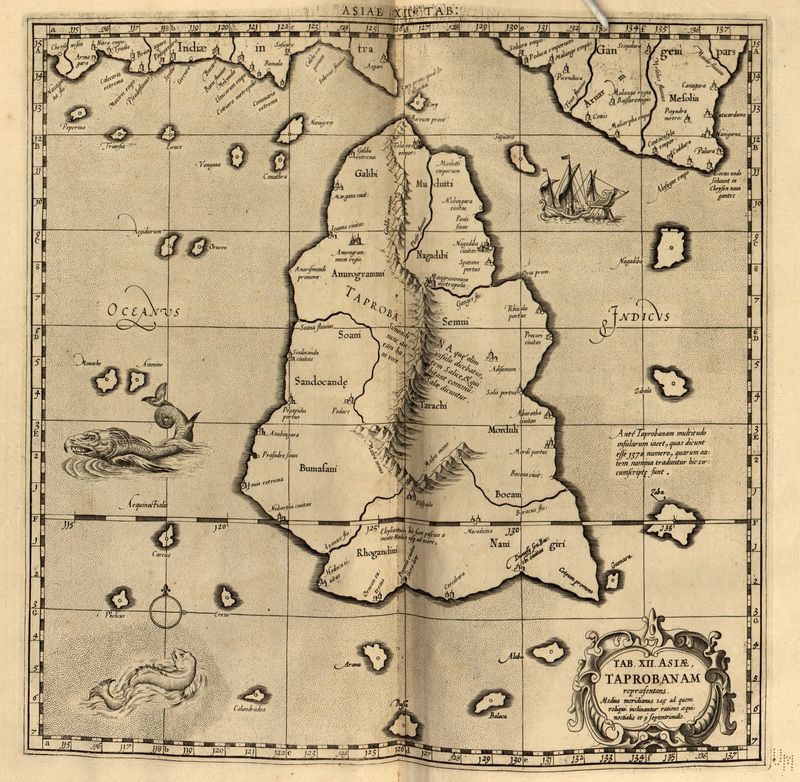 The First Volume of the 5,453 Names of the Buddha, date unknown

This Tibetan manuscript was acquired by Walter Koelz on a 1932-33 expedition to Tibet and Northern India for the Museum of Anthropology at the University of Michigan.

The title of the text, written in gold on black background on the first page, is "The First Volume of the 5,453 Names of the Buddha"--these are the names of the Buddha recorded during the translation of the Kangyur (bka' 'gyur) from Sanskrit to Tibetan. The Kangyur is one of the two traditional divisions of the Tibetan Buddhist Canon (along with the Tangyur), which includes the sutras and tantras accepted by the tradition as spoken or directly inspired by the Buddha (according to the Princeton Dictionary of Buddhism).

The manuscript is hand-written (as opposed to woodblock printed) in U-chen (dbu can) script, in black ink within red borders. 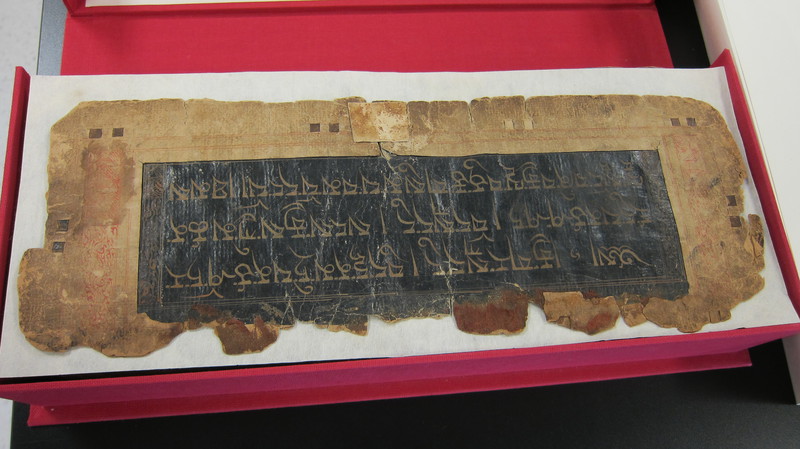