The free and open exchange of ideas in a democracy requires a free press that can fulfill its role as the fourth estate, acting as a check and balance on state power. Independent journalists question the ability for true debate to occur, that represents ideas beyond the established U.S. two-party power structure, when the media are owned by large corporations that are themselves members of the dominant systems of power.

Alternative media includes community publications, like those produced by local organizations such as clubs or advocacy groups and protest movements. Everyday citizens raise attention for issues that are otherwise overlooked, share their concerns, and seek to bring together people with common interests. This type of media can take a variety of formats like newsletters, zines, pamphlets, or even graffiti—all independently created and published. 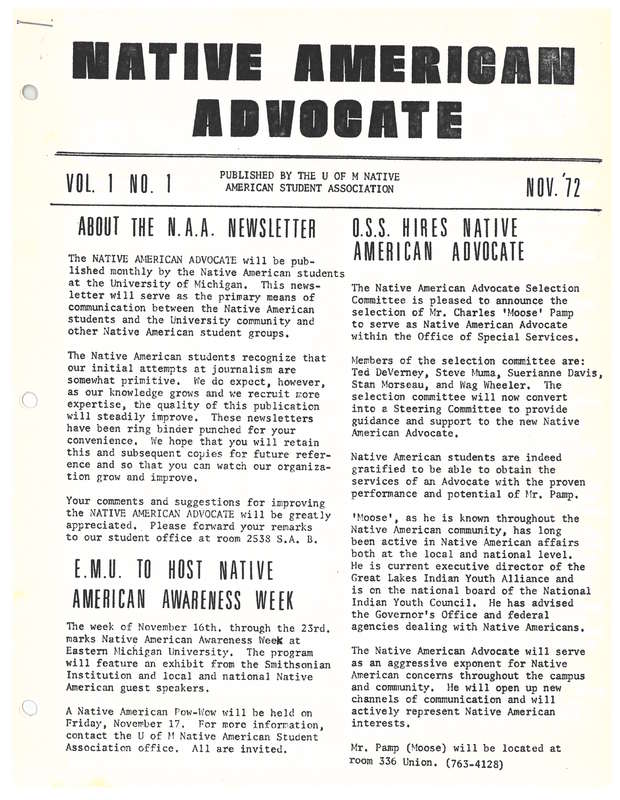 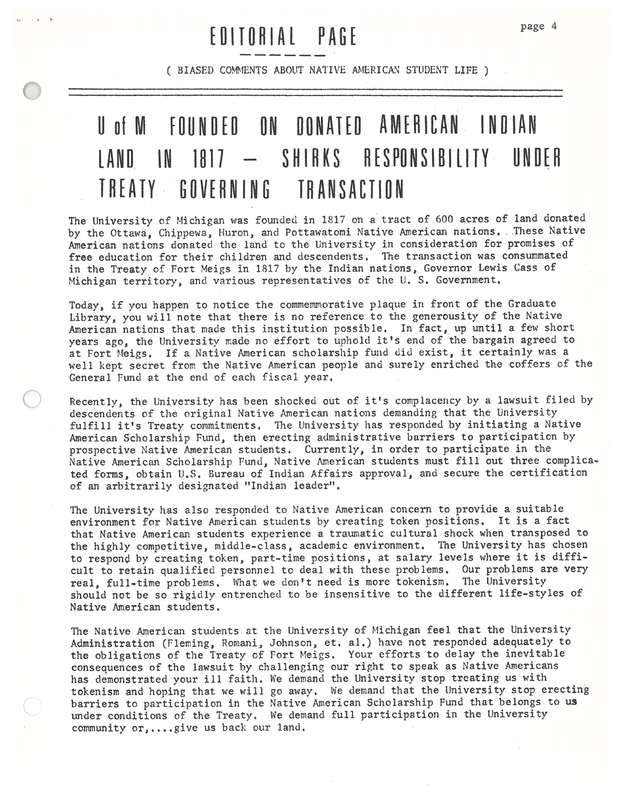 The Editorial Page, on the right, of the first issue of the Native American Advocate features the article, “U of M Founded on Donated American Indian Land in 1817 — Shirks Responsibility Under Treaty Governing Transaction” about a lawsuit holding the University accountable for the promise of free education for the children of the Native American nations that donated their land. 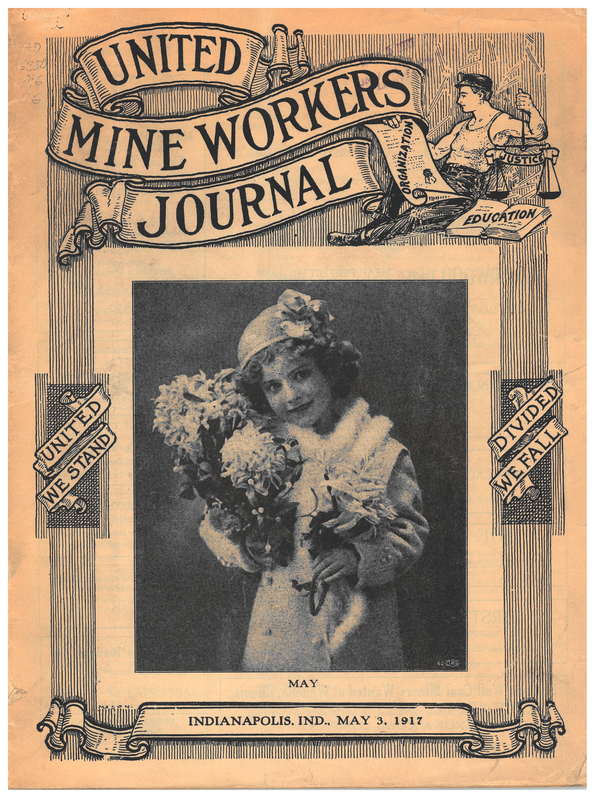 Above is the cover of the United Mine Workers Journal from the May 3, 1917 issue. The title of the journal is paired with the image of a miner holding a certificate that says “Organization,” the scales of “Justice,” and an open book that says “Education.” The main cover image is of a young girl holding a bouquet of flowers. To either side of the image are scrolls printed with the slogan: “United We Stand; Divided We Fall.”

The United Mine Workers of America is an industrial labor union that was founded in 1890. The Journal was first published in 1891 and continues to the present day. This 1917 issue featured a Poet’s Corner, union and industry news, a calendar and reports of events, a column about women’s issues, local reports, job postings, and advertisements. Their membership was made up of many immigrants, so the magazine featured Italian and Slovak language sections. The Journal serves to connect workers across the nation and aid in organizing efforts. The first headline article in the May 3, 1917 issue reads “Wage Rates Raised by Agreement for Anthracite Miners” and reports on the outcome of successful negotiations to raise the daily wage rate as much as 36% in some cases.

The alternative press is authored by professional journalists operating outside of the mainstream corporate-owned media. They are focused less on maximizing profit and more on circulating news that is under-represented and providing critique of bipartisan elite policies through the practice of investigative journalism. Although independent journalists may sometimes get their work published in mainstream publications, they often work with smaller media outlets that emphasize editorial freedom and publish regular newspapers and magazines, or audio-visual formats like radio and television. 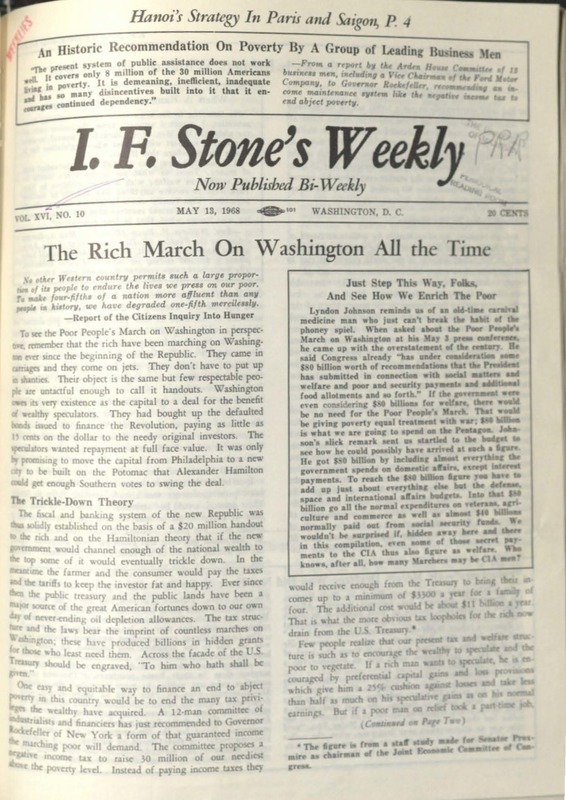 The image above shows the front page of the May 13, 1968 issue of I.F. Stone’s Weekly. The headline states “The Rich March On Washington All the Time.” Stone critiques the disparities between plentiful tax breaks and subsidies for corporations and the rich compared to the limited relief provided to the poor, and notes that while the wealthy often visit the Capital to advocate for their purposes, there have been very few organized efforts by the poor to march on Washington and those few attempts were broken up by force. Stone cites from the Report of the Citizen’s Inquiry into Hunger to provide evidence for policies that entrench wealth disparities. This issue was published at the beginning of the Poor People’s Campaign that lasted from May 12 - June 24, 1968, part of the Civil Rights movement that sought to build multiracial coalitions to advocate for solidarity in working to end poverty.

I.F. Stone was a progressive journalist who established his own independent publication, I.F. Stone’s Weekly (later the Bi-Weekly), after being pushed out of work with major publications (he was formerly a reporter for the New York Post, The Nation, Picture Magazine, The New York Star, and the The Daily Compass) during the McCarthy era. Stone drew largely on close examination of government publications in his reporting to expose lies and deception, including acting as an early critic of the Vietnam War. I.F. Stone’s Weekly was published from 1953-1971. His legacy is remembered through the Izzy Awards, an annual achievement award for outstanding independent journalism from the Park Center for Independent Media. 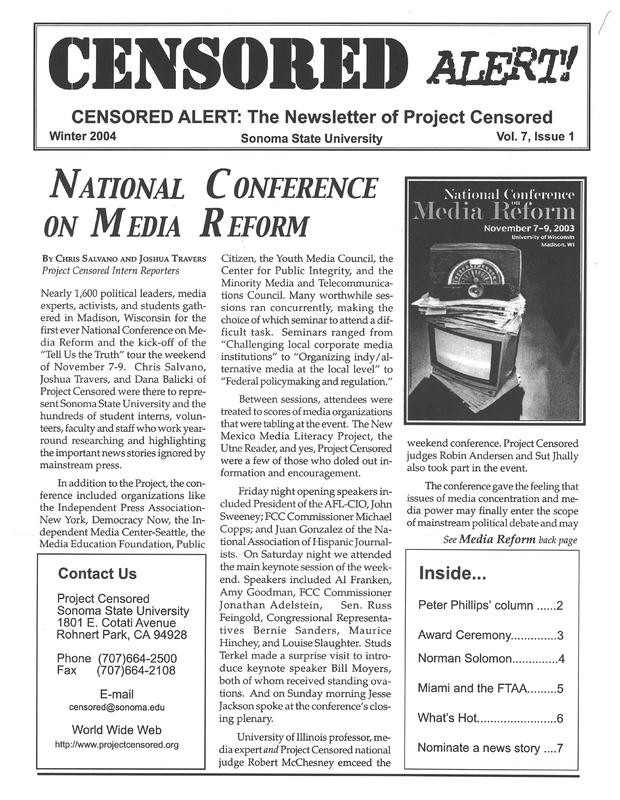 Project Censored was founded at Sonoma State University in 1976 and is an educational organization that seeks to bring awareness to news stories by independent journalists that are ignored or underreported by the mainstream media. Their mission is to promote critical media literacy and democracy. The Censored Alert newsletter was published in the late 1990s and early 2000s; since 1993 they have also published a yearbook featuring collections of censored news stories and media critiques.

Shown above is the cover page of the Winter 2004 issue of Censored Alert!: The Newsletter of Project Censored. The feature headline reports on the “National Conference on Media Reform” and reports on the conference held November 7-9 in Madison, Wisconsin. Project Censored staff attended the conference and shared names of seminars such as “Challenging local corporate media institutions” and keynote sessions with speakers such as Al Franken, Amy Goodman, FCC Commissioner Jonathan Adelstein, Sen. Russ Feingold, and Congressional Representatives Bernie Sanders, Maurice Hinchey, and Louise Slaughter. The reporters were hopeful that “issues of media concentration and media power may finally enter the scope of mainstream political debate.”

Freedom of the press is enshrined in the First Amendment of the U.S. Constitution. Nonetheless, there are ongoing threats to journalistic freedom that date back to the days of the Founding Fathers when the Sedition Act of 1798 was passed, which criminalized speech that was deemed a threat to the government. Although the Sedition Act has long since expired, these days the Espionage Act of 1917 is still used against whistleblowers and journalists that expose information seen as a threat to national security. 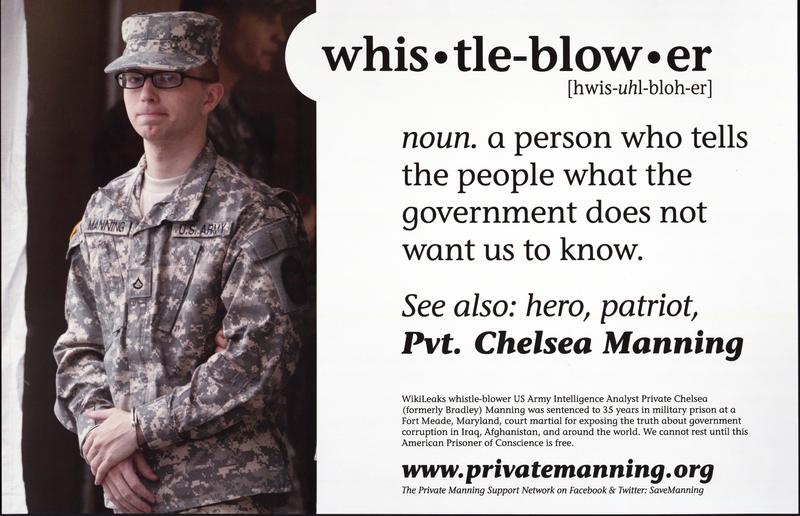 This poster, above, features a picture of Private Chelsea Manning in army uniform and includes the definition of the word “whistleblower” as “a person who tells the people what the government does not want us to know. See also: hero, patriot, Pvt. Chelsea.” In smaller text underneath it reads: “WikiLeaks whistle-blower US Army Intelligence Analyst Private Chelsea (formerly Bradley) Manning was sentenced to 35 years in military prison at a Fort Meade, Maryland, court martial for exposing the truth about government corruption in Iraq, Afghanistan, and around the world. We cannot rest until this American Prisoner of Conscience is free.” Text at the bottom attributes the poster to “www.privatemanning.org - The Private Manning Support Network on Facebook & Twitter: SaveManning.”

Chelsea Manning was convicted under the Espionage Act in 2013 and served 7 years in prison for releasing classified and sensitive documents to Wikileaks. These documents provided information about US actions in Iraq and Afghanistan, including the “Collateral Murder” video that showed American forces shooting at reporters from a helicopter (the pilots claim to have mistaken the reporter’s cameras for weapons). Major news publications such as the New York Times, The Guardian, and others published and reported on the documents shared by Manning. The US government charged Julian Assange, the founder of Wikileaks, with violating the Espionage Act. This action is considered by many to be an attack on the freedom of the press. 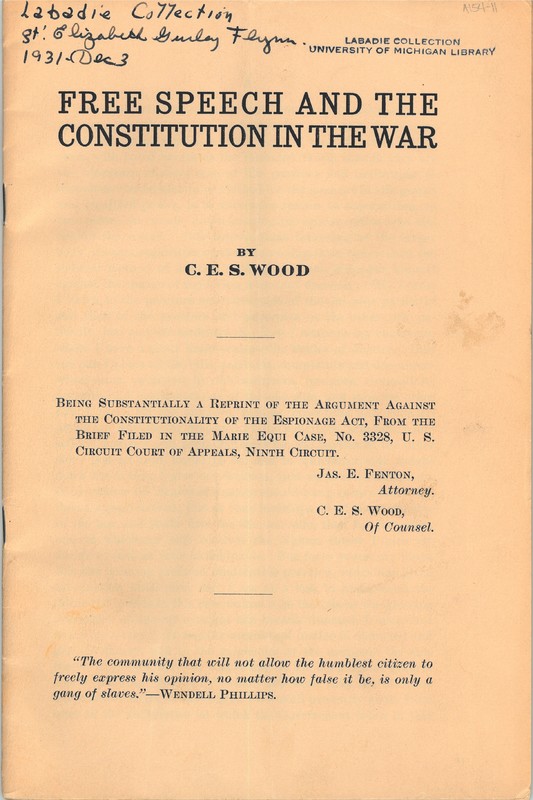 Free speech and the Constitution in the War. Wood, Charles Erskine Scott. Joseph A. Labadie Collection.

Above is the cover of a booklet titled “Free Speech and the Constitution in the War by C. E. S. Wood.” It notes that it is “substantially a reprint of the argument against the constitutionality of the Espionage Act, from the brief filed in the Marie Equi case, no. 3328, U. S. Circuit Court of Appeals, ninth Circuit.” At the bottom there is a quote by Wendell Phillips, “The community that will not allow the humblest citizen to freely express his opinion, no matter how false it may be, is only a gang of slaves.” There is no date of publication on the booklet, but a handwritten note from the Labadie Collection has the date it was donated to the library as "1931 Dec. 3."

Marie Equi was a physician and political activist, including advocating for such causes as birth control, labor rights, and anti-war efforts. She was arrested and prosecuted for sedition for anti-WWI resistance speech, shortly after the passage of the Espionage Act of 1917 and the Sedition Act of 1918. Equi was imprisoned for one year and one day at the San Quentin State Prison in 1920-21. Leading up to her arrest, Equi protested against U.S. involvement in WWI at a pre-war preparedness campaign parade with a banner that read “PREPARE to die, workingman — jp morgan & co. want preparedness for profit — thou shall not kill.”

Third Parties: Alternatives to the Hegemony of the U.S. Two Party System