Anarchism emerged as a cohesive ideology in the wake of the Industrial Revolution, when many citizens saw themselves becoming cogs in the enormous machine of a capitalist state. For those who perceive the political establishment as serving only a small elite and failing to meet the needs of the people, then doing away with government may appeal as an alternative ideology. While Anarchism is popularly thought of as purposeful disorganization and even chaos, there are more principled anarchisms that assert their own species of order and agency, anarchisms that imagine the people reclaiming “sovereignty” in less bureaucratic forms of “real democracy.” 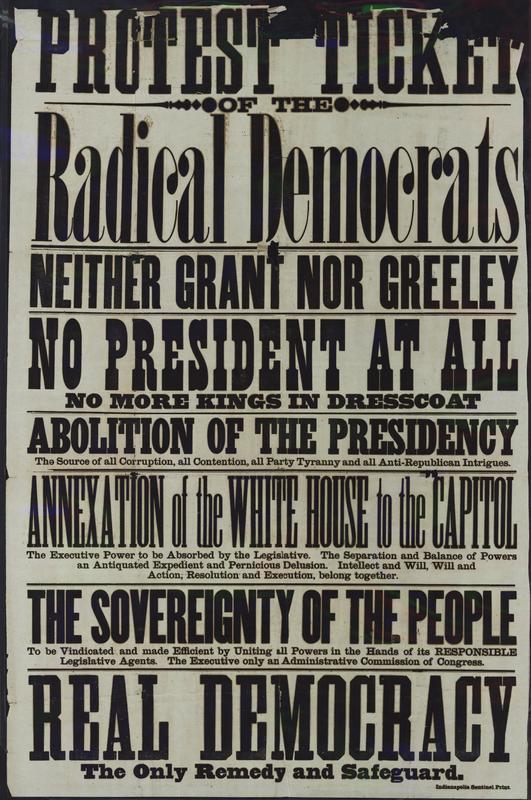 Above is a flyer making just such an appeal. Though the group responsible for this poster calls itself Radical Democrats, their politics are decidedly anarchic as they call for the outright abolition of the presidency. The presidential election referenced here, between the incumbent Ulysses S. Grant (Republican) and Horace Greeley (Liberal Republican / Democrat) took place in 1872, with Grant winning reelection. The poster’s text reads in full:

“Protest ticket of the Radical Democrats. Neither Grant nor Greeley. No president at all. No more kings in dresscoat. Abolition of the presidency, the source of all corruption, all contention, all third party tyranny and all anti-republican intrigues. Annexation of the White House to the capitol. The executive power to be aborted by the legislative. The separation and balance of powers an antiquated experiment and pernicious delusion. Intellect and Will, Will and Action, Resolution and Execution, belong together. The sovereignty of the people. To be vindicated and made efficient by uniting all powers in the hands of the RESPONSIBLE legislative agents. The executive only an administrative commission of congress. Real Democracy the only remedy and safeguard.” 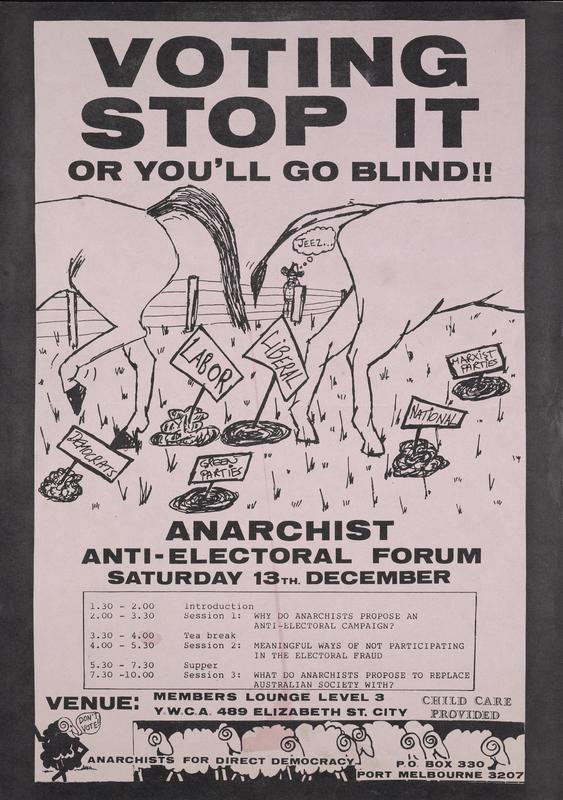 At the core of Anarchism’s political ideology is the conviction that existing bureaucratic institutions and mechanisms of governance, including voting, work only to reinforce a diseased system. Anarchism is thus grounded in a critique of the very truth of democracy and the possibility for debate. Anarchists represent voting as being a fruitless act of self-gratification in the face of an oppressive power that has rendered impotent the body politic. The innuendo-laden language here is intentional: the playful phrasing in the first flyer above conjures voting as a masturbatory act. 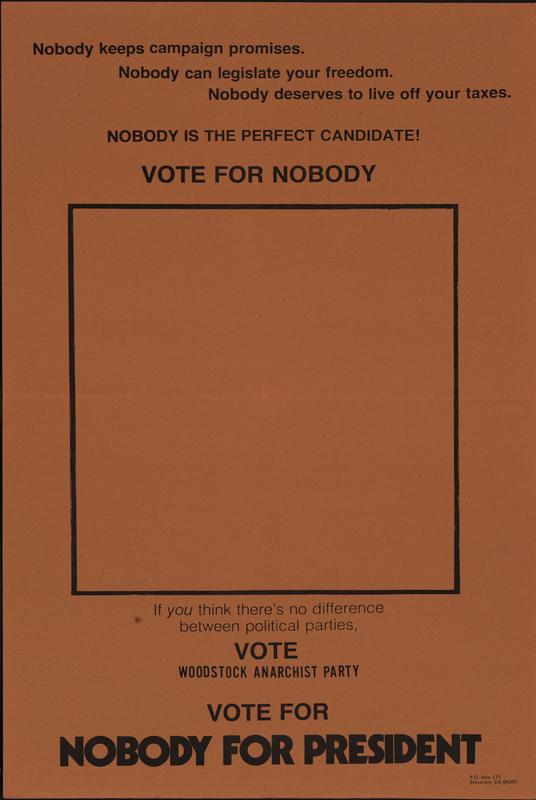 Above is a poster distributed by the Woodstock Anarchist Party, based out of Stockton, California. Where a typical political poster would feature an image of the promoted candidate, this poster, under text reading "Nobody is the perfect candidate. Vote for nobody," leaves an empty frame. Thus the poster's stark visual rhetoric manifests its verbal claims, which continue to say that “Nobody keeps campaign promises. Nobody can legislate your freedom. Nobody deserves to live off your taxes.”

Anarchism does not only operate through disruption or negative non-action. Indeed, since Anarchism proposes that citizens can themselves better fulfill the services otherwise provided by the state, locally-organized, grassroots cooperative action has long been a pillar of anarchic practice. Take for instance activities organized in the wake of 2005’s devastating Katrina hurricane, where anarchist groups came together to distribute food and supplies, deliver first aid to victims and offer other forms of mutual aid when formal mechanisms at the state and federal levels failed. Analyses of the Occupy Wall Street movement have likewise detailed how actions on the ground were determined via patently anarchic principles of non-coercive, consensus (or “horizontal”) decision making. 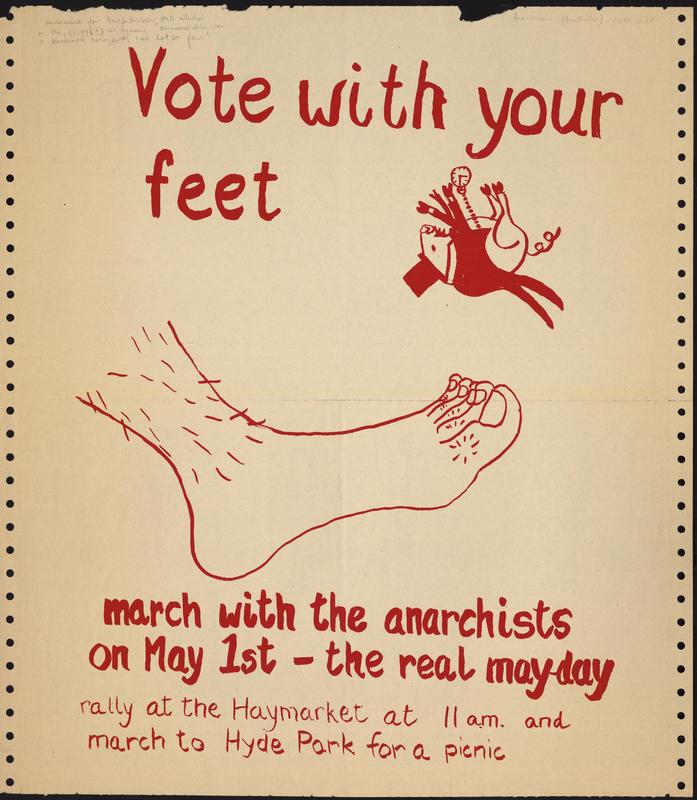 The hand-drawn poster above features text reading, "Vote with your feet, march with the anarchists on May 1st—the real may-day." On 1 May 1976 a general state election was held throughout New South Wales, Australia. This poster urges citizens to abstain from voting and invites them to an alternative venue: a public demonstration and a community picnic in downtown Sydney. Additionally, while May 1st is also International Workers Day (AKA Labor Day, May Day), New South Wales actually observes Labour Day on the first Monday of October, so this poster places the weal of the Australian labor force at odds with formal “democratic” processes. 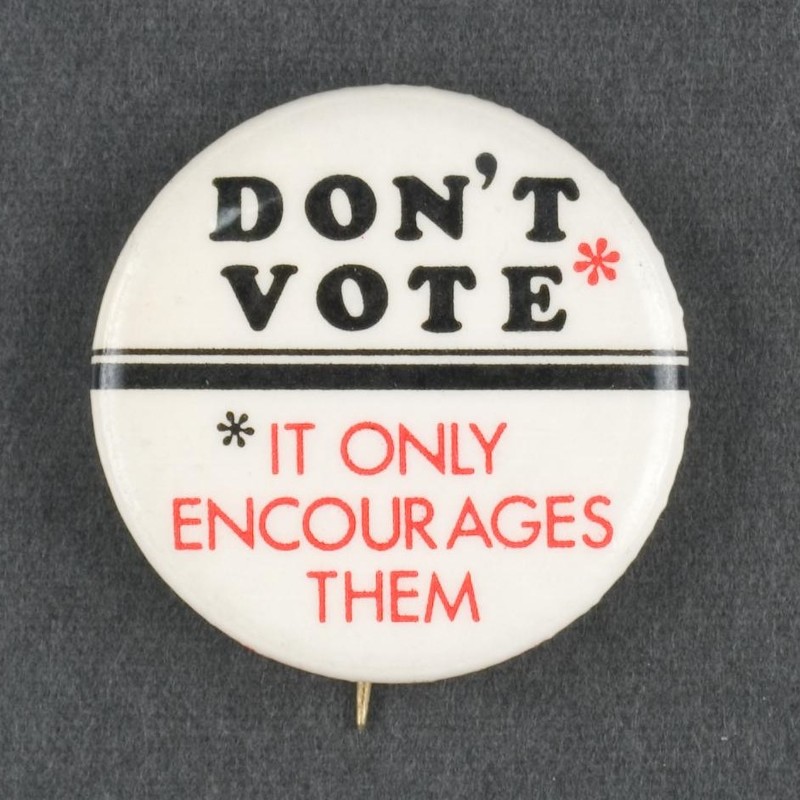 While it too promotes abstention from voting, the button pictured above also speaks to a certain collective spirit through its very materiality. Such a button, pinned to one's lapel or bookbag, for instance, publicly announces a particular political disposition and may be a signal of affiliation with other like minded citizens.