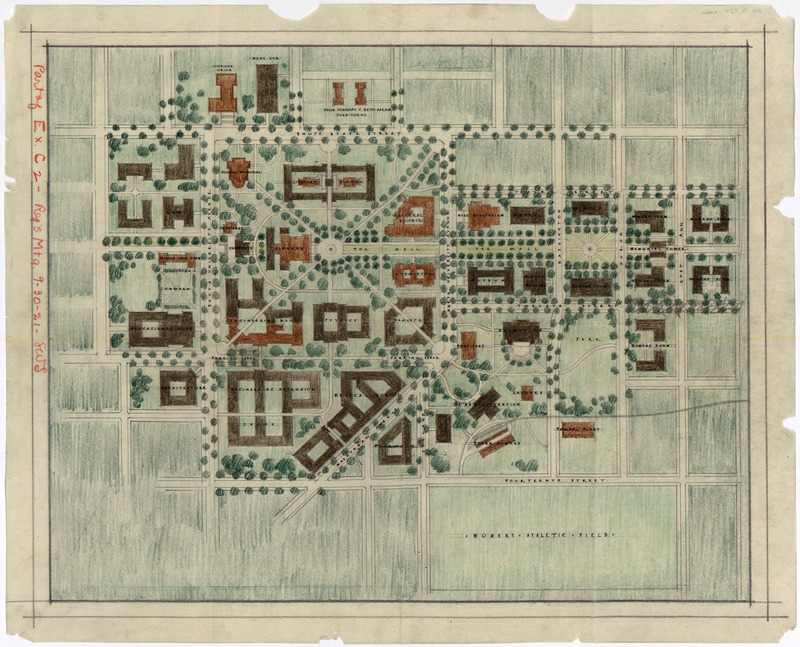 Newly arrived President Burton worked with a special committee of three regents in 1920 to create a building plan showing the University's needs. This map was part of the university's 1921 request to the legislature. The Burton plan would shape campus development for the next thirty years (Mayer, p. 193). 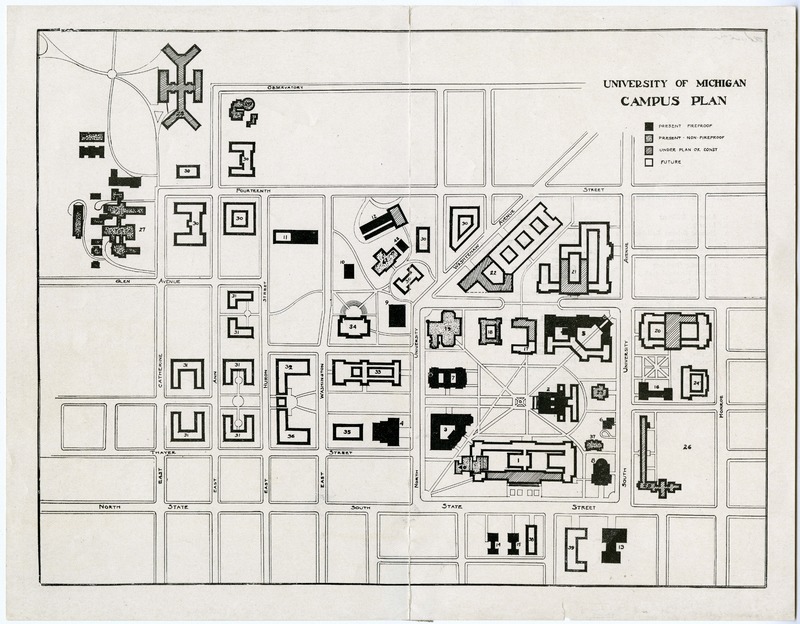 This map of campus orients the north to the left and notes buildings that are fireproof or non-fireproof, under plan or construction, and planned for the future construction. The map was likely created just after the Burton Plan (1921) and contains many of the same suggested buildings.

Burton accomplished much during his very brief tenure at the university, including reinstating a visual order to campus and integrating the new official master planning function into the administrative structure. With the creation of the Comprehensive Building Program, all plans now had to receive approval from the regents, so Burton’s in 1921 was the first to be formally adopted and implemented since the 1840 plan (Mayer, 101-102). 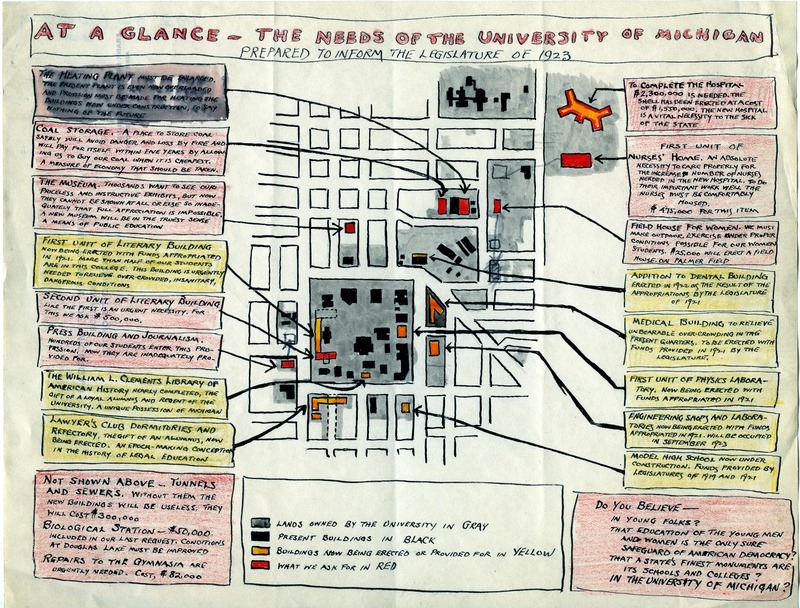 This hand-drawn map of the current, under construction, and future buildings on campus in 1923 is a draft version for At One Glance, the University of Michigan and its Needs. It illustrates the financial needs and future planning of campus and provides background information for current and future buildings. The 1921 Burton plan influenced this stage of campus expansion. 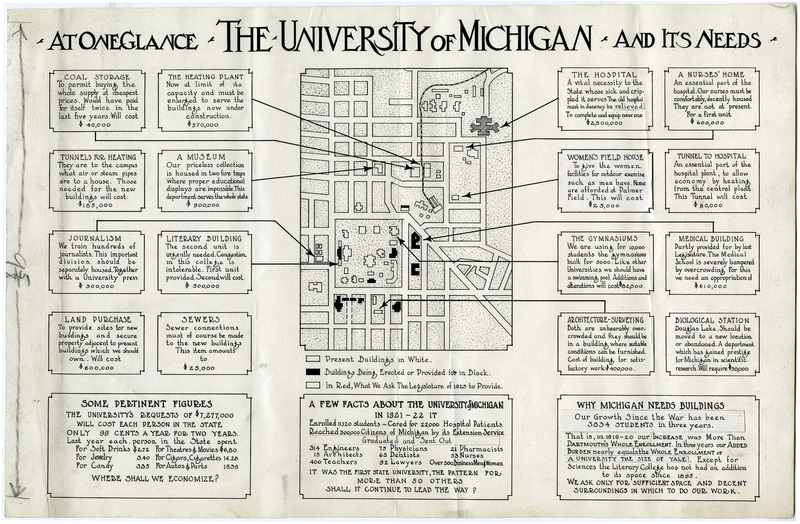 The regents used this map of campus from 1923 as part of a formal request of $7,277,000 from the Michigan legislature. It highlights currents buildings, those under construction, and those the university hoped to obtain funding to build. In requesting these funds, the plan highlighted the rationale and price for each building the university hoped to construct. Only $3,800,000 was approved (Mayer, p. 99).

The Burton plan dramatically expanded campus beyond the original 40 acres given by the Ann Arbor Land Company. It defined the mall concept for the northern expansion, proposed a strongly defined central open space and the use of walking paths to link various parts of campus. It also saw the Beaux Art style spread widely across the campus (p. 102). Unfortunately, President Burton died unexpectedly in 1925, but his plan effectively continued to guide development until the 1950s. 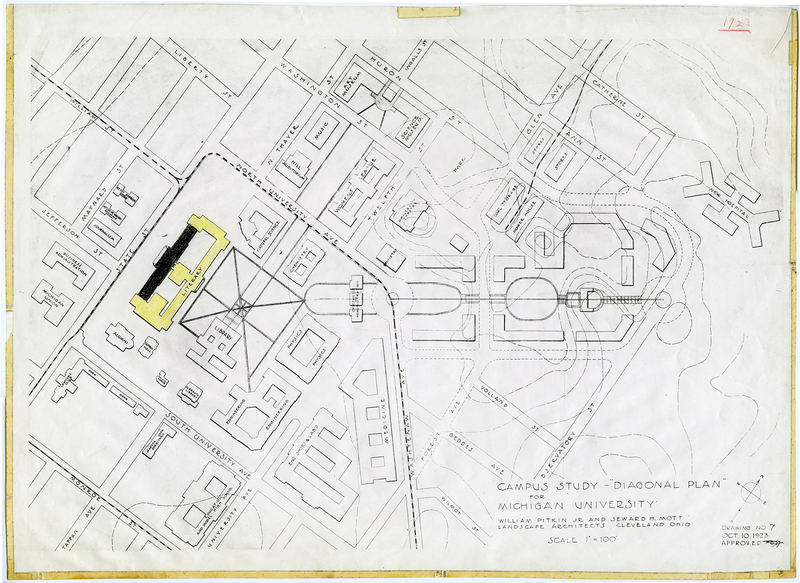 The university hired the landscape architecture firm Pitkin and Mott in 1923 to assist with campus planning and create landscape plans for the Clements Library (1923) and other new buildings on campus. One especially interesting feature of this plan is the diagonal mall connecting the Central Campus to the University Hospital, then under construction. It would open in 1925. Just north of the center of the diagonal is a proposed outdoor theater built into the steep contours of the "cat hole." The scope of this campus plan expands beyond the original central 40 acres (Mayer, 179). 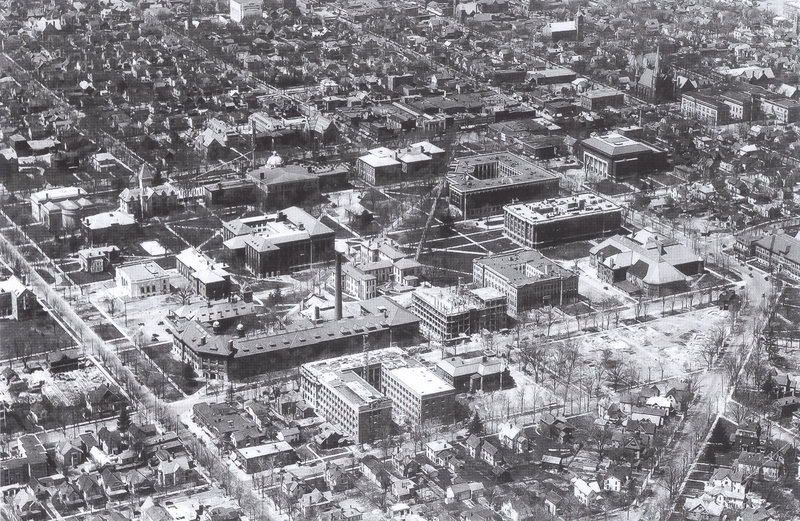 This aerial photo shows the Michigan campus from the east as it appeared in 1923. Angell Hall, the Clements Library, the East Engineering Building, Randall Laboratory, and the East Medical Building are all in various stages of construction. 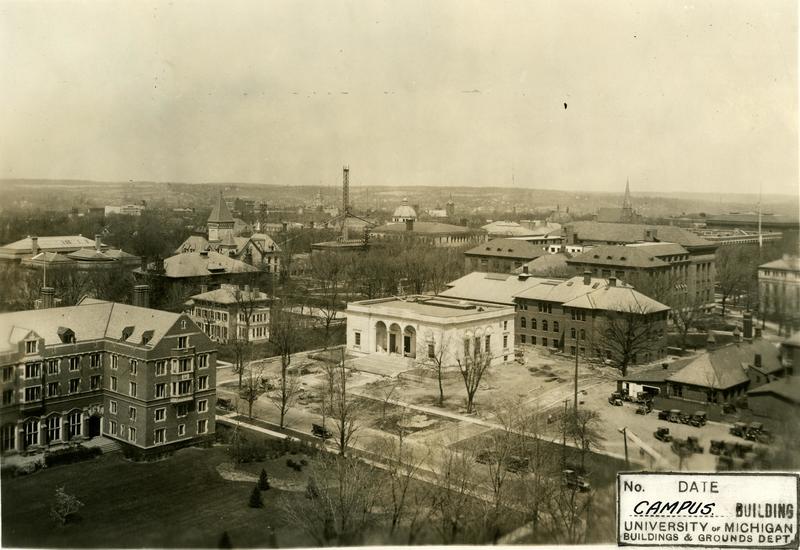 This view of campus looks towards the northwest. The nearly completed Clements Library is visible in the foreground, with the new General Library building (1920), and Angell Hall under construction in the background.

Despite Angell Hall's large size, its construction represents only part of the original design, which also included a campanile in the central courtyard. (Mayer, Fig. 5.17, p. 99). 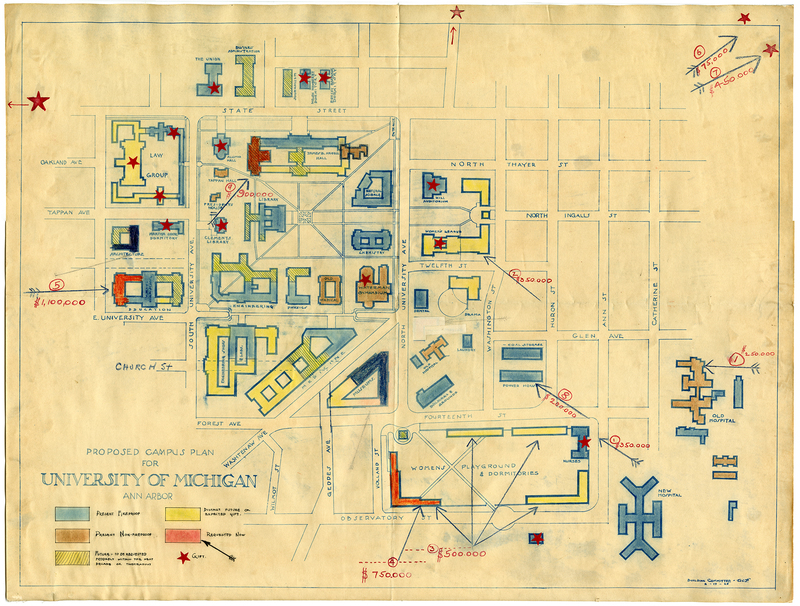 This plan by Pitkin and Mott, accompanying the 1925 legislative building request, shows refinements to the 1921 plan, including a more definitive plan for the Law Quadrangle, the development of housing for women around the periphery of Palmer Field, and a campanile on the axis of Ingalls Mall just south of Washington Street. The stars indicate privately funded projects (Mayer Fig. 5.23, p. 107). 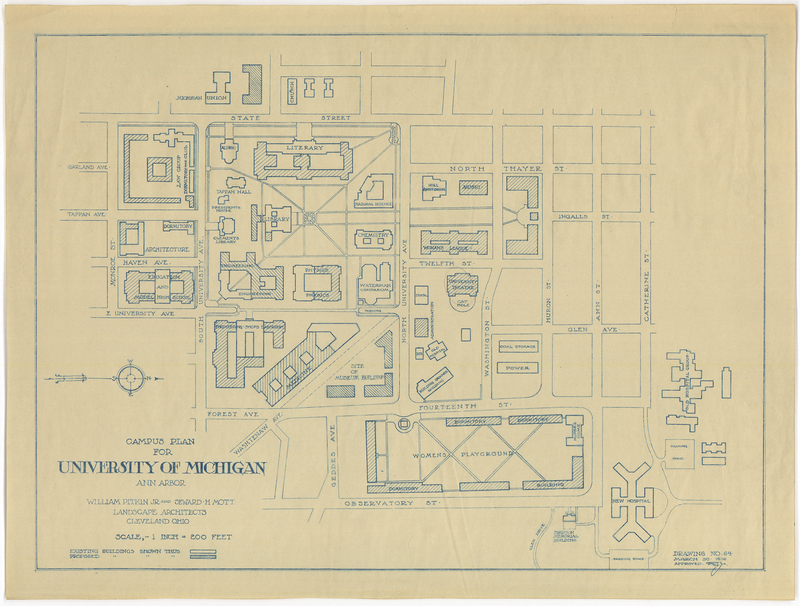 An updated Pitkin and Mott plan from 1926. The diagonal fill lines represent proposed buildings. Of particular note is the Women's League Building, which would open in 1929. 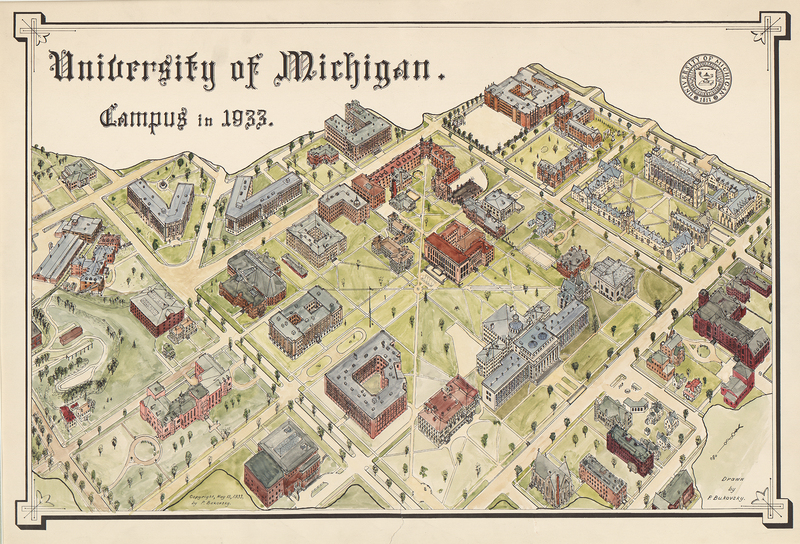 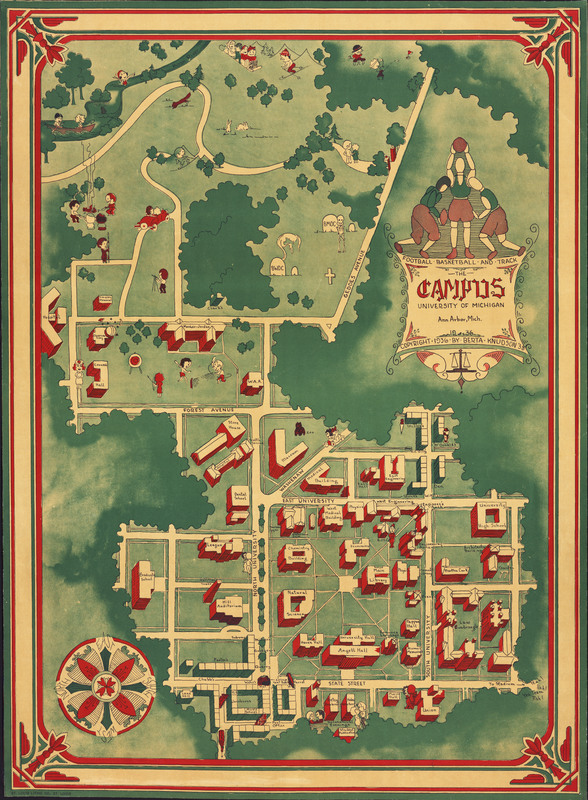 Student Berta Knudson’s 1936 pictorial map of campus exudes a light-hearted tone with the BMOC (Big Man on Campus) and BWOC (Big Woman on Campus) as a skeleton and ghost respectively, winter sports in the Arb, and couples necking at the “Necumenical Evenings.” Humor aside, the map depicts an accurate placement of buildings in 1936, even if the portrayal of their facades is not quite faithful.