Henry Ives Cobb was first approached in 1895 about designing a new art building for the University of Michigan. However, after examining the layout of the existing campus Cobb determined that it would be impossible to design such a building without first knowing where the new building would be built. Additionally, Cobb felt that in order to determine the site of the building, he would need to take into consideration the entire campus (Mayer, p. 68). So a plan of the existing campus, seen below, was drawn up and sent to Cobb. He drew two different designs for the new art building, and the drawings were used to raise funds for the art building. In the process, though, Cobb was authorized by the regents to create a new proposal for the organization of campus (Mayer, p. 69). 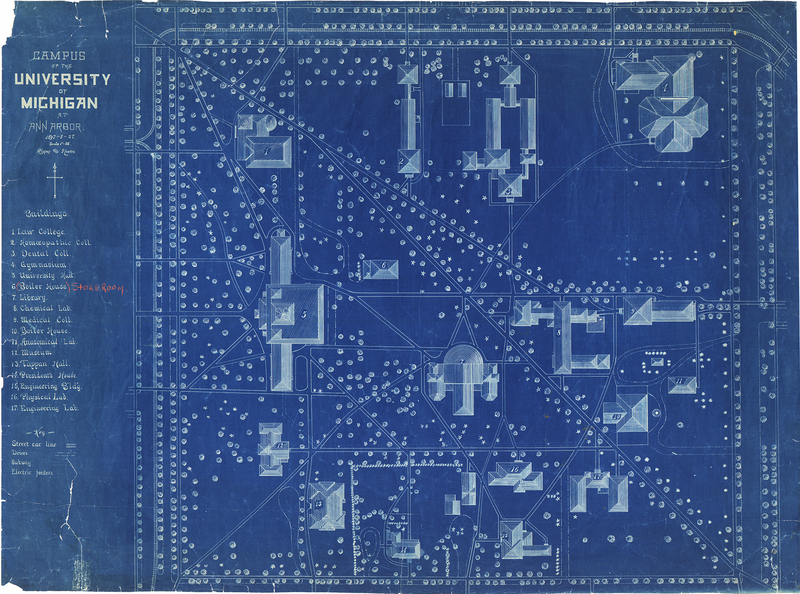 This map of the university, drawn specifically for Henry Ives Cobb, gave Cobb an up-to-date and accurate map of campus to help site Alumni Memorial Hall. The university hired Cobb to create architectural drawings for it and was eventually asked to prepare a plan for campus. This map of the campus, as it existed in 1897, was prepared in conjunction with H. I. Cobb’s effort to develop a master plan. The disorganized pattern of building placement of the latter part of the nineteenth-century is evident in this drawing (Mayer, 70).

When Cobb delivered his master plan to the regents, there were three distinct deviations from previous ones, including the most recent from 1840. Cobb’s plan was the first to deal with the entire 40 acres as a whole, rather than dividing it into zones, which had been done in the past. Secondly, Cobb introduced the idea of a central open square whose main access was via North University Avenue, much like Ingalls Mall today. Additionally, Cobb wanted all the buildings surrounding the central open space to have a second inward-facing orientation as well (Mayer, 70). Sadly, Cobb’s spaces were not well defined and the Diag became de-emphasized. His idea for a northern entrance to the Diag did eventually allow for the expansion and inclusion of Ingalls Mall as part of Central Campus. 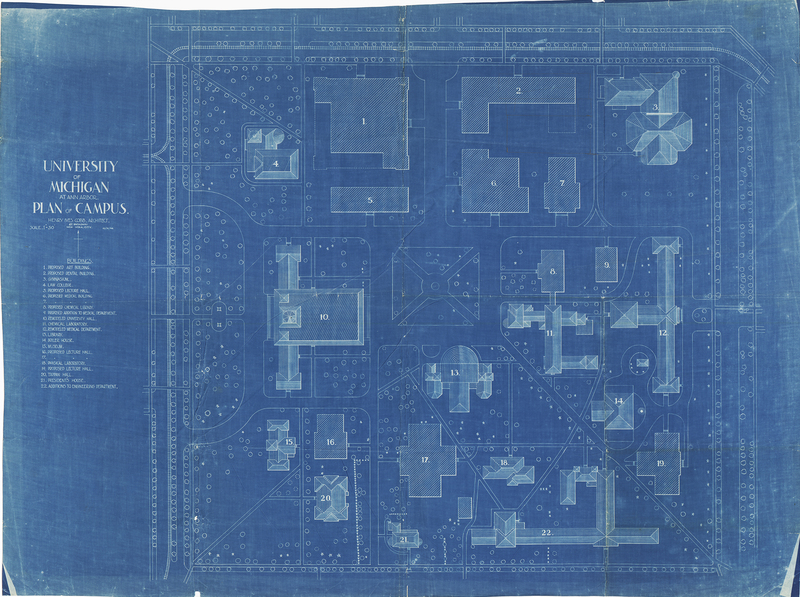 Cobb's master plan for campus includes both existing and proposed buildings. In his plan for the university, the key buildings went from focusing on the State Street row towards an inward-oriented quadrangle that became the current Diag. This plan was never enacted.