An artistic jack-of-all-trades, Robert Altman was a legend within the film industry, his innovative style and personable nature were an irresistible siren call to others.  His relaxed sets, with their unconventional emphasis on collaborative filmmaking that allowed actors extraordinary access into the creative process with personal character input, original dialogue, and improvisation, fostered strong bonds and friendships. 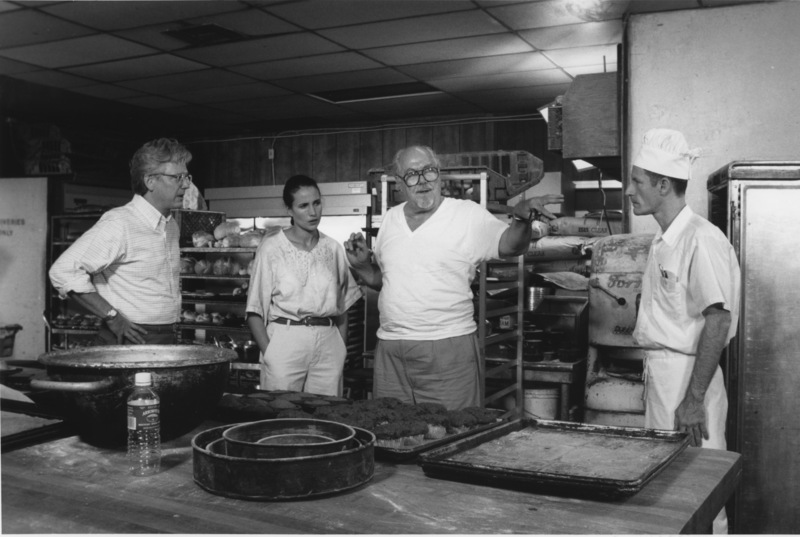 Robert Altman with Bruce Davidson, Andie MacDowell, and Lyle Lovett on the set of Short Cuts.

As a result, many of his collaborators, such as actors Elliott Gould, Lily Tomlin, and Shelley Duvall, returned again and again to work on multiple films.  The Altman & Actors section provides a glimpse into these countless relationships, as reflected in the Altman Archive. 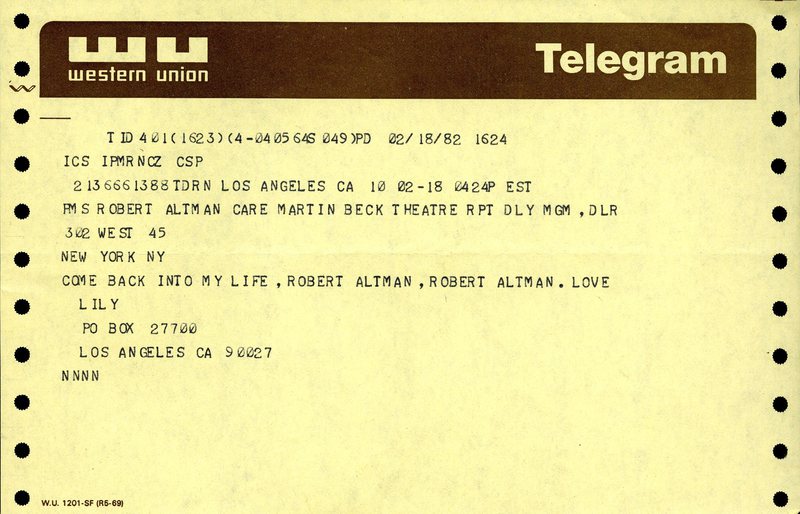 Telegram from actress Lily Tomlin–one of several Altman “regulars”–sent to Altman while he was on Broadway directing Come Back to the Five and Dime, Jimmy Dean, Jimmy Dean, a play that he would film for the big screen later that same year.

Even working on a TV commercial was a great experience when Altman was directing as evidenced by this letter from Harry Connick Jr.

“Dear Mr. Altman – I never imagined a TV commercial for a cellular phone company would be unforgettable… But it was… Seriously, working with you was one of the great times of my life – I hope we’ll work together again someday… Love, Harry” 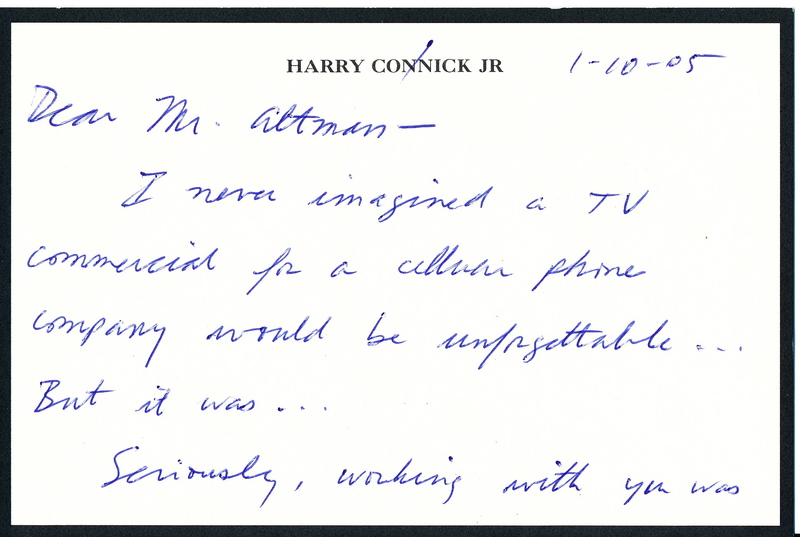 Altman’s highly acclaimed film The Player (1992) is a biting satirical glimpse inside the often unscrupulous dealings that occur in Hollywood.  It was a world Altman knew well, and his onscreen depiction of it was much appreciated by others “on the inside", as evidenced by the following letters from celebrities.

“Bob, THE PLAYER is a jewel, the best film in years. It so perfectly captures that wierd (sic) world of your industry and the surrounding environs and yet it also engages and touches audiences who wouldn’t know a trailer from a double wide. Thank you. I hope you get to do lots more of what you want. Tom” 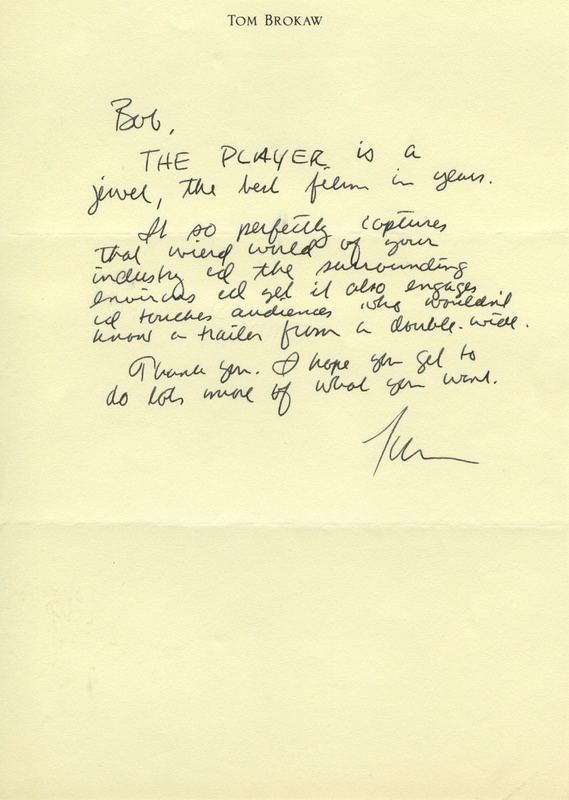 “Dear Bob, Just a note to thank you for a great time I had last night seeing your picture. It’s great! It made me feel like going to the movies again. I wish you the best, best luck. As we say here: merde! Warmest regards, Roman” 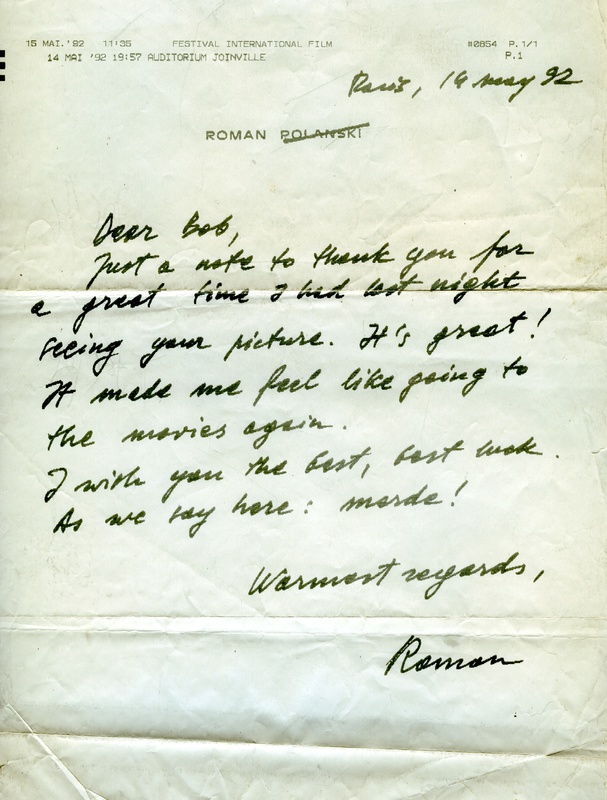 "We liked it so much we didn't even notice our son's bit was cut" -- Mel Brooks and Anne Bancroft. 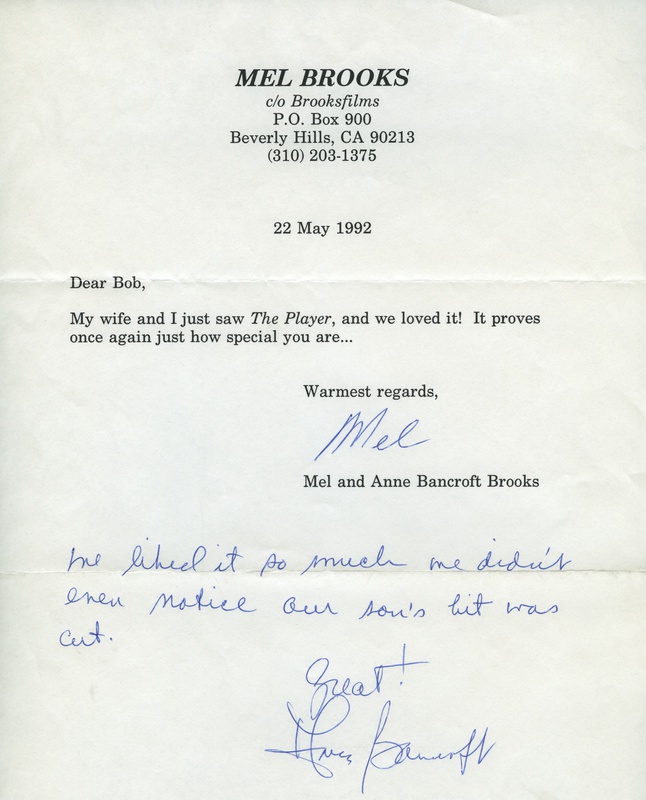 Mel Brooks and Anne Bancroft, typed and handwritten note to Robert Altman, May 22, 1992. 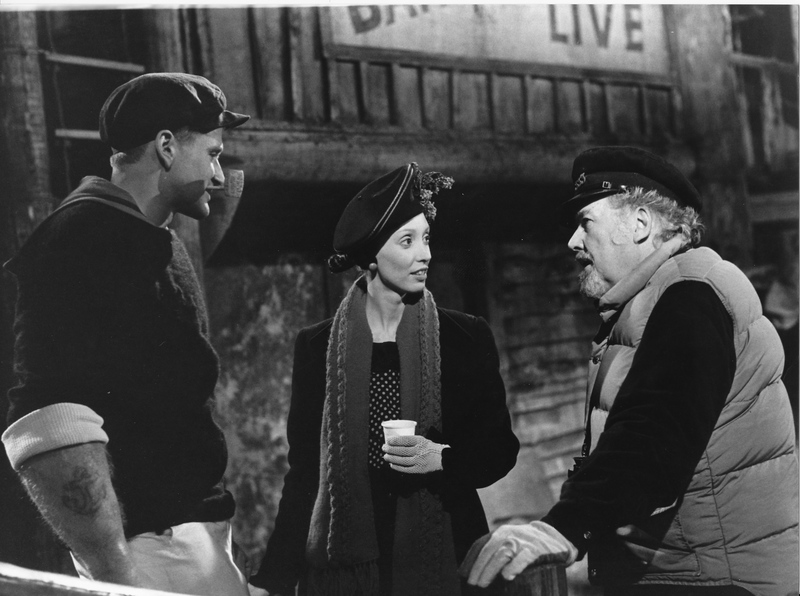 Behind-the-scenes photograph of Robin Williams, Shelley Duvall, and Robert Altman on the set of Popeye.

A hand-made calendar was a special gift to Robert Altman from his staff or family.  It contains many casual photographs of the director on sets with actors as well as listings of occasion's to remember.  One casual moment is this image of Robert Altman and Elliott Gould playfully reenacting the classic Grant Wood painting “American Gothic” on the set of California Split, a film that follows two gamblers to a high-stakes poker game in Reno. 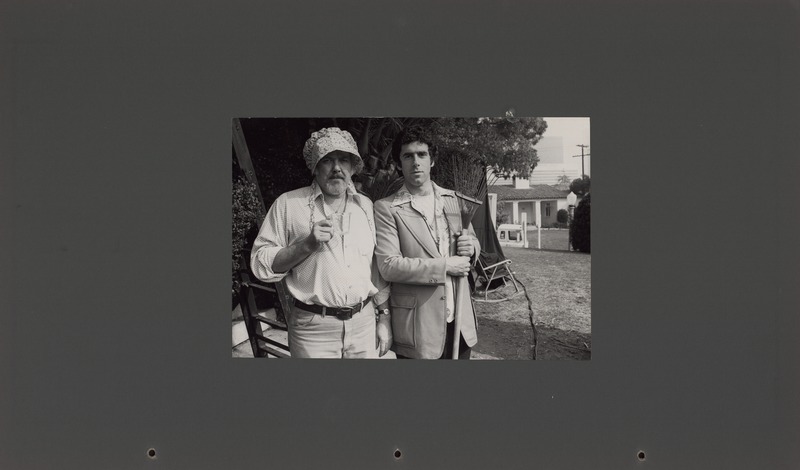 Photograph of Robert Altman and Elliot on the set of California Split, 1974. 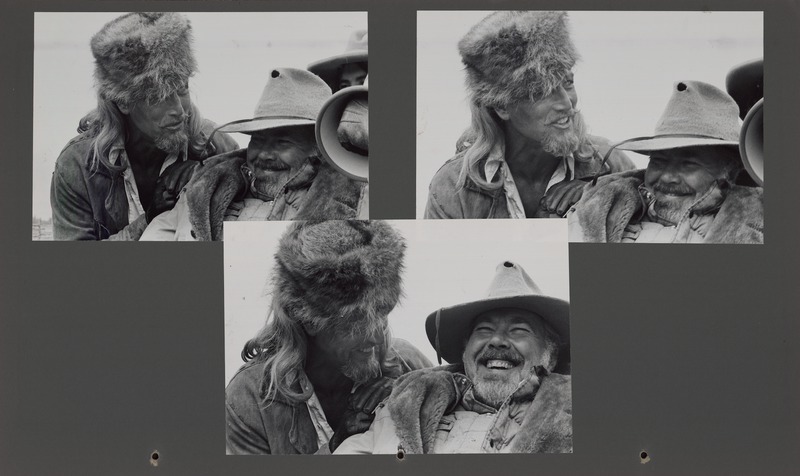 Candid images of Paul Newman and Robert Altman on the set of Buffalo Bill and the Indians (1976).  From the “Altman Calendar,” July.

Robert Altman, Keith Carradine, and Shelley Duvall on the set of Thieves Like Us (1974), a film based on an Edward Anderson novel by the same name that chronicles the doomed love affair of an escaped convict and the daughter of a gas-station attendant in 1930s Mississippi. 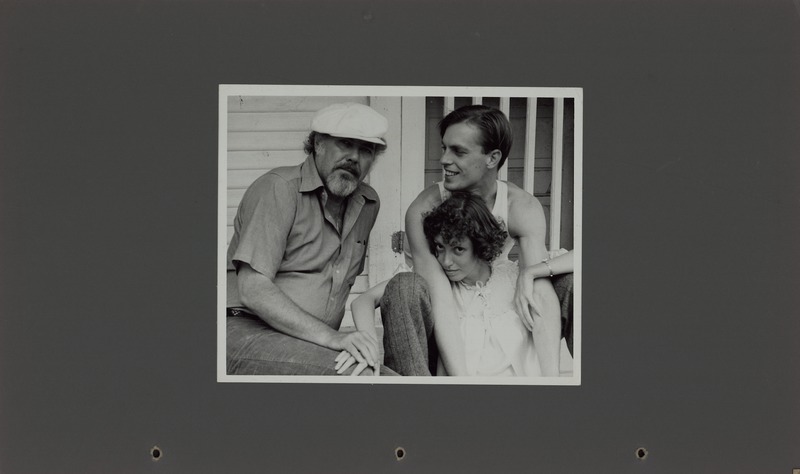 Photograph of Robert Altman, Keith Carradine, and Shelley Duvall on the set of Thieves Like Us (1974).  From the “Altman Calendar,” February. 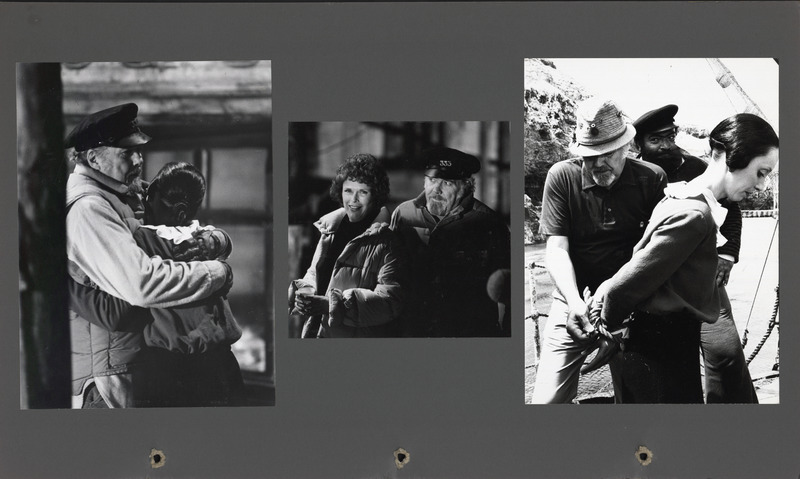 Candid images of Robert Altman, Kathryn Altman, and Shelley Duvall on the set of Popeye (1980).  From the “Altman Calendar,” December.