Robert Altman’s early work was part of the transition from easily recognizable genres of Hollywood films of the 1940s and 1950s to riffs on those genres in the 1960s and 1970s.  The Long Goodbye (1973) shattered the audience’s expectations of the detective story while both McCabe & Mrs. Miller (1971) and Buffalo Bill and the Indians (1976) did the same for westerns.  Even when working closer to the norms of genres such as science fiction (Quintet, 1979), gangster film (Thieves Like Us, 1974), or the English manor house mystery (Gosford Park, 2001), Altman found ways to put his own stamp on the style and feel of each of his movies. 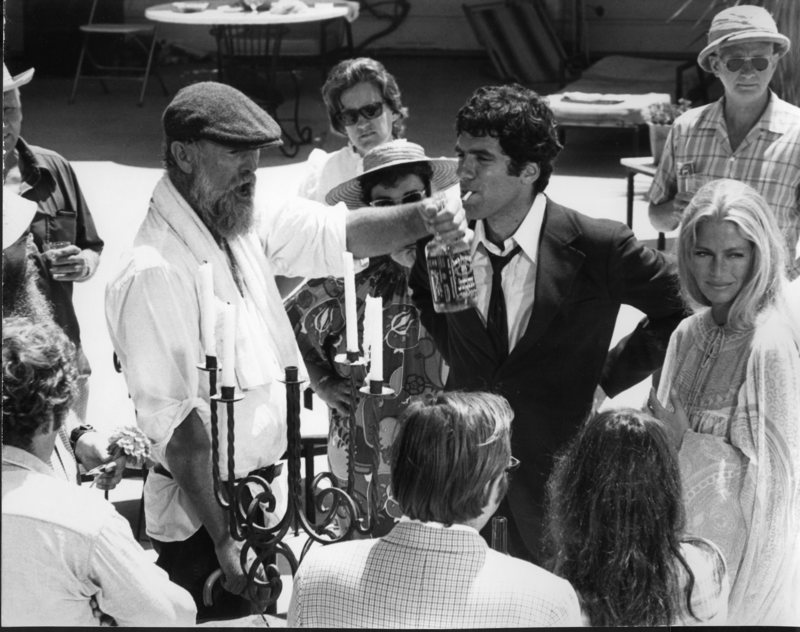 Raymond Chandler’s sixth and last mystery featuring private eye Philip Marlowe, The Long Goodbye (published in 1953), was surprisingly not made into a film until Robert Altman’s treatment of it in 1973.  Altman places the story in contemporary Los Angeles, while keeping the lead character true to Chandler’s original.  During filming Altman and the crew referred to the lead character as “Rip Van Marlowe,” emphasizing the anachronism of this 1950s man living in 1970s Los Angeles. 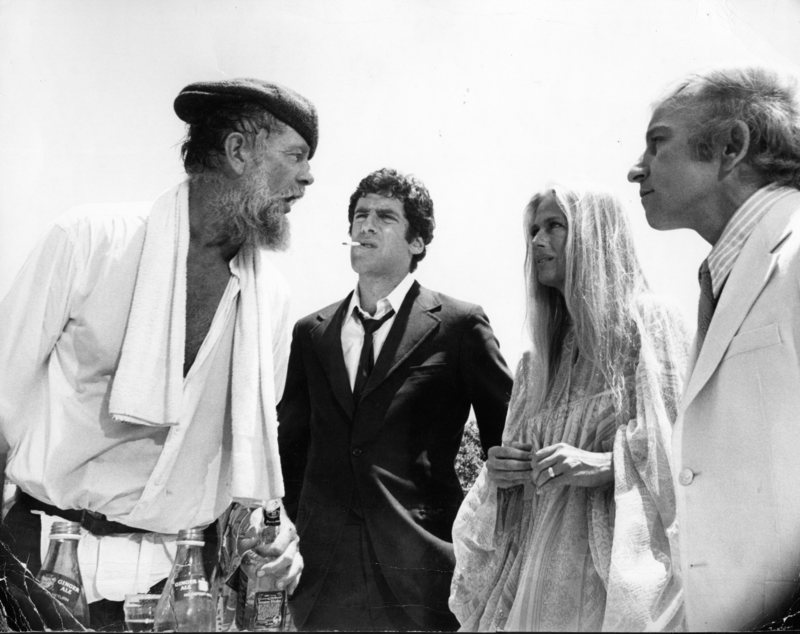 Photograph from the set of The Long Goodbye.

In this letter to Italian screenwriter and director Gian Luigi Rondi, Altman comments on Chandler’s writing and the “moral man” character represented by Marlowe.  “I wasn’t attracted by the story at all except that I wanted to make a movie the way Chandler made a detective novel.  The story is very complicated, but it’s really just a framework on which to suspend a hundred thumbnail sketches.”

“[In the 1950s] … he [Marlowe] helped us to delude ourselves into thinking that not only could good guys finish first, but that there were indeed moral men who were clearly definable from the bad guys.  In the 70s…he’s a man who cares, going up against the controlled tidiness and sheen of the surrounding chaos.  A moralist in an immoral world.” 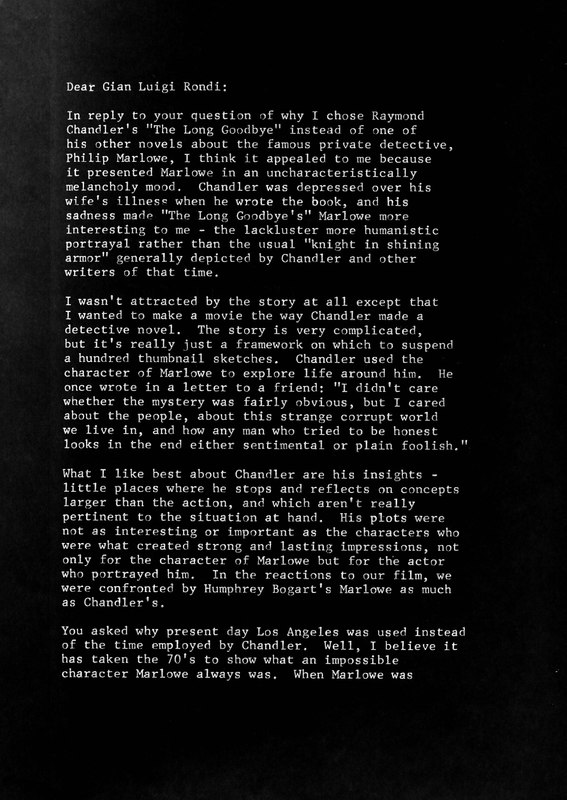 Altman’s approach to the classic Western film was to strip away the romanticism and common plots in order to present real people in gritty and challenging circumstances.  Here, in one of his most revered films, Altmanshows a complex world of deals and business, a world built on enterprise, gambling, and money from McCabe’s saloon and Mrs. Miller’s brothel.  Instead of heroes in white hats, the film’s leads were a cowardly man and a businesswoman addicted to opium.  This film has been selected for inclusion in the National Film Registry. 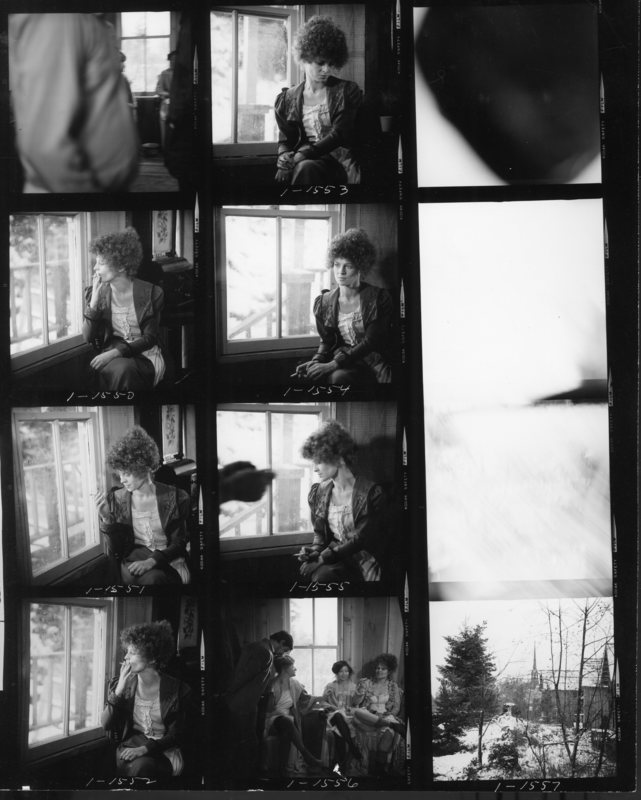 Contact sheet of photographs from the set of McCabe & Mrs. Miller. The film goes out of its way to highlight the business procedures of a brothel.

John McCabe (Warren Beatty) riding a horse through the cold winter of the American Northwest toward town, wearing a fur coat that is far removed from the cowboy garb of typical western films. 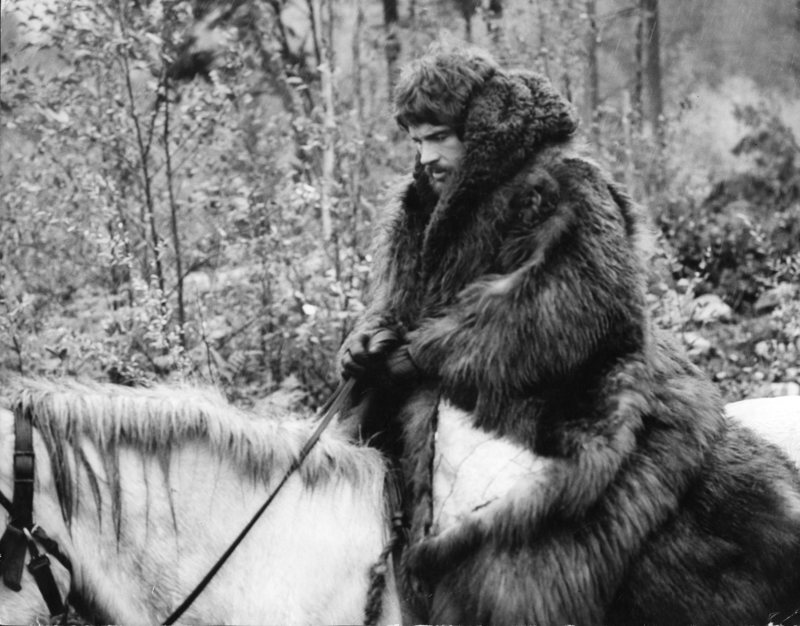 Buffalo Bill and the Indians, or Sitting Bull’s History Lesson (1976)

When filmmakers looked at the “old west” through the lens of the socially turbulent 1960s and 1970s, one of the most striking revisions they made to the traditional genre of the Western is a reinterpretation of the role of Native Americans.  In Buffalo Bill and the Indians, Buffalo Bill Cody is disconcerted to find that Chief Sitting Bull is not willing to act out Custer’s Last Stand from the point-of-view of white man’s history. 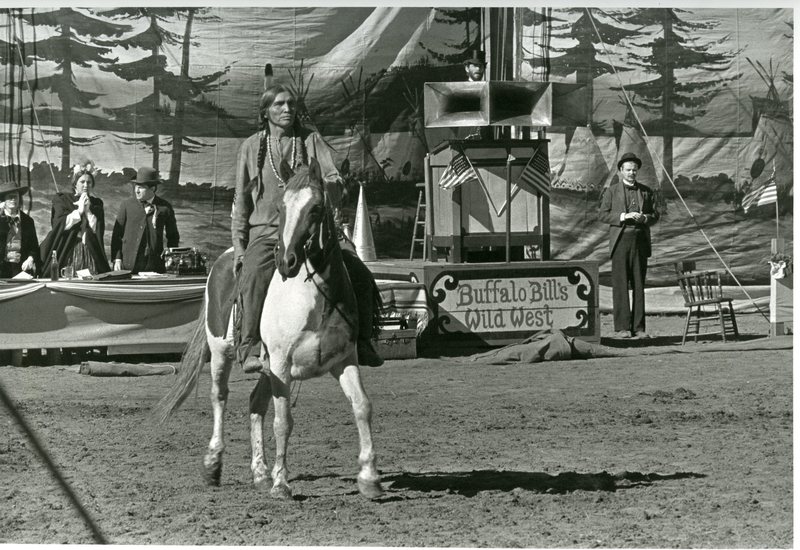 Photograph from the set of Buffalo Bill and the Indians showing Frank Kaquitts, who played Chief Sitting Bull.

Altman’s portrayal of Buffalo Bill Cody was held in high regard by those preparing exhibits for the new Gene Autry Western Heritage Museum in 1987.  Curator Roslyn Dauber asked Altman to intercede on behalf of the museum to request permission from United Artists to use clips from the film. 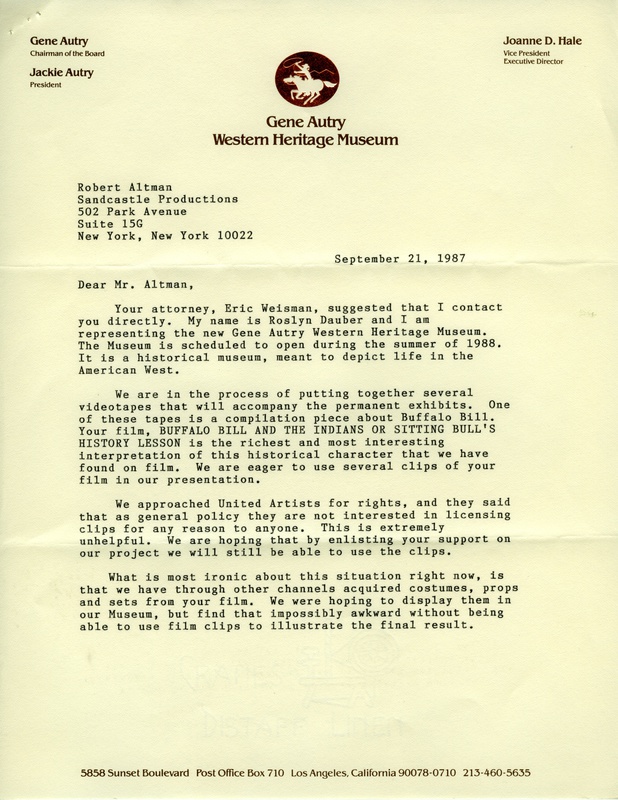 In response, Altman composed a letter to Diane Nassau, an executive of United Artists, asking that they grant permission to the museum and referring to the research that was done to make the portrayal historically authentic. 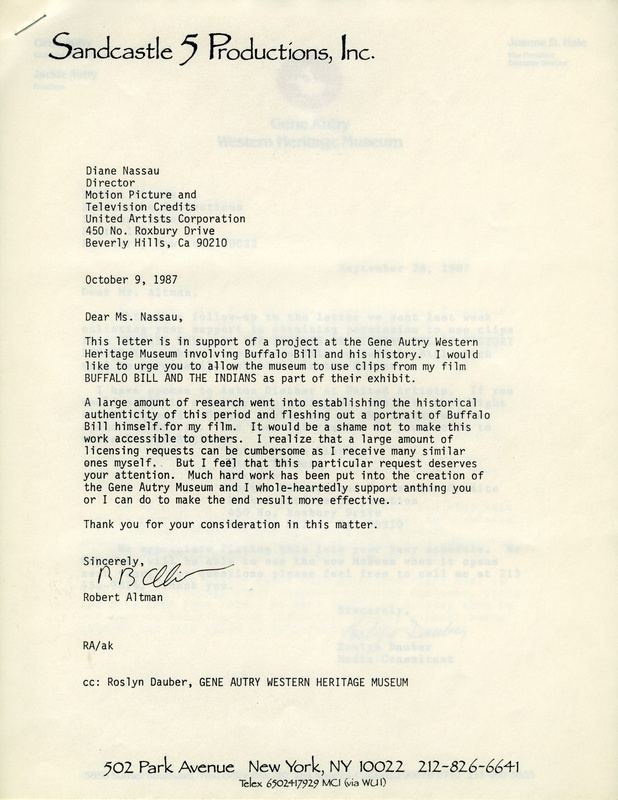 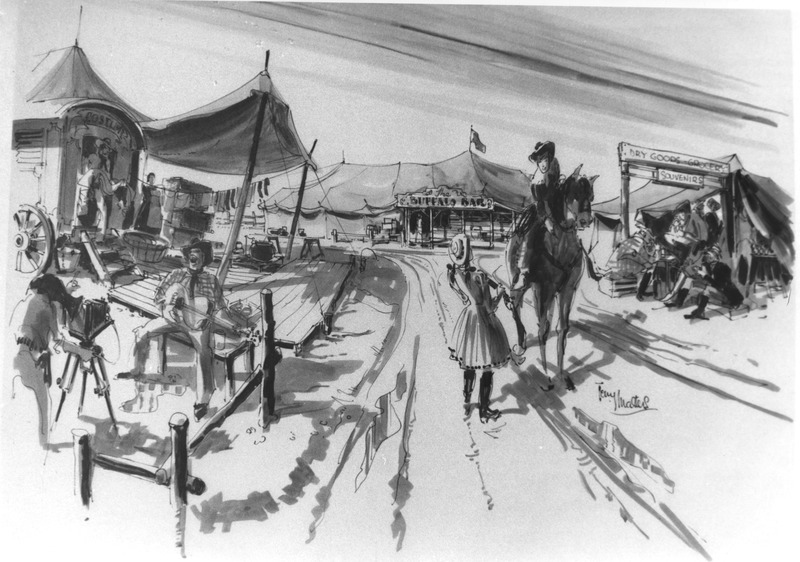 Photograph of original painting by Art Director Tony Masters for Buffalo Bill and the Indians. 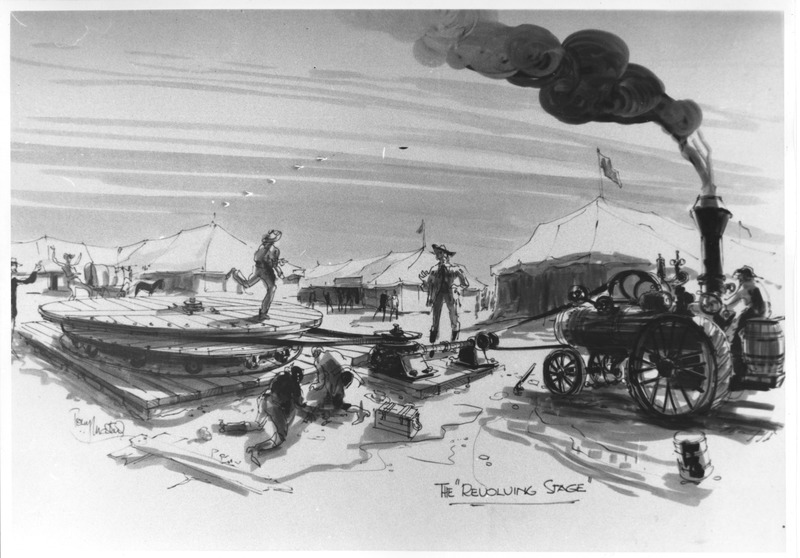 Photograph of original painting by Art Director Tony Masters for Buffalo Bill and the Indians.

A number of directors tried their hand at making unconventional gangster films after the success of Bonnie and Clyde in 1967.  Altman’s entry in this field, Thieves Like Us, is a matter-of-fact treatment of the lives of criminals.  His characters are not well-off city folk but impoverished rural southerners.  Even the lovers at the center of the plot, Keith Carradine and Shelley Duvall, do not have the look of typical romantic leads.  Altman’s unique touches include depicting poverty with beautiful cinematography and using radio broadcasts from the times as commentary on the action. 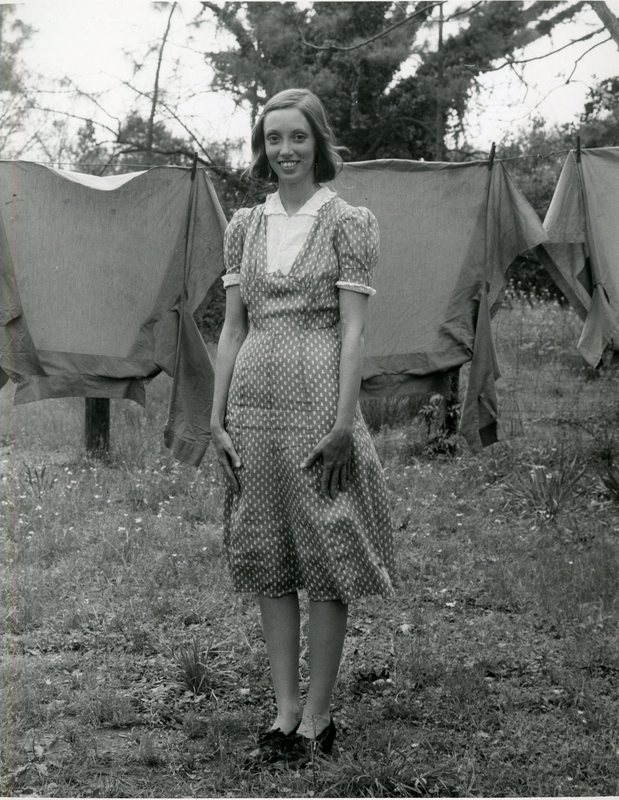 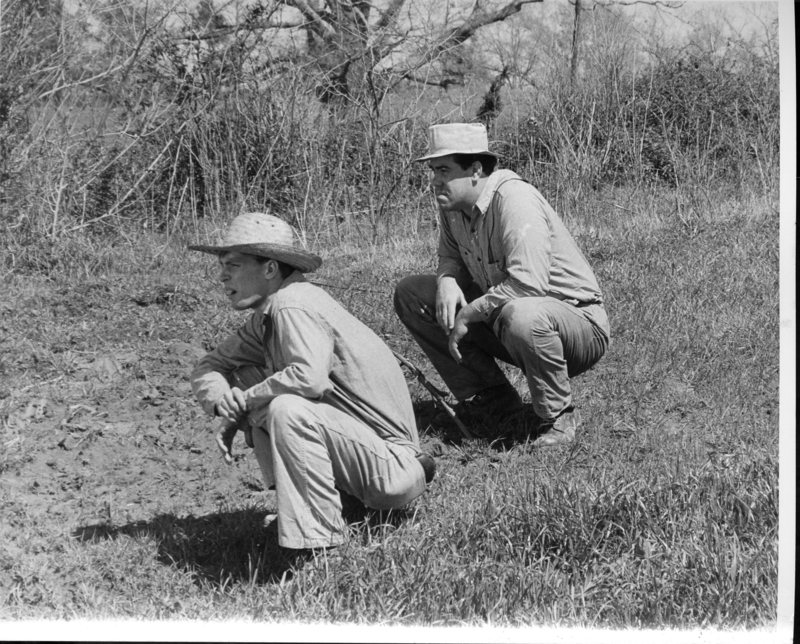 Robert Altman’s only foray into the realm of science fiction came with Quintet in 1979.  That decade had seen the rise of the blockbuster sci-fi film with Star Wars (1977) and Superman (1978), as well as sci-fi/horror mixes such as Alien (1979) and Invasion of the Body Snatchers (1978).  Quintet is a futuristic story in which inhabitants of a future post-apocalyptic ice age, including Essex (Paul Newman) and Vivia (Brigitte Fossey), spend their time playing a board game called “Quintet” involving living human pieces. 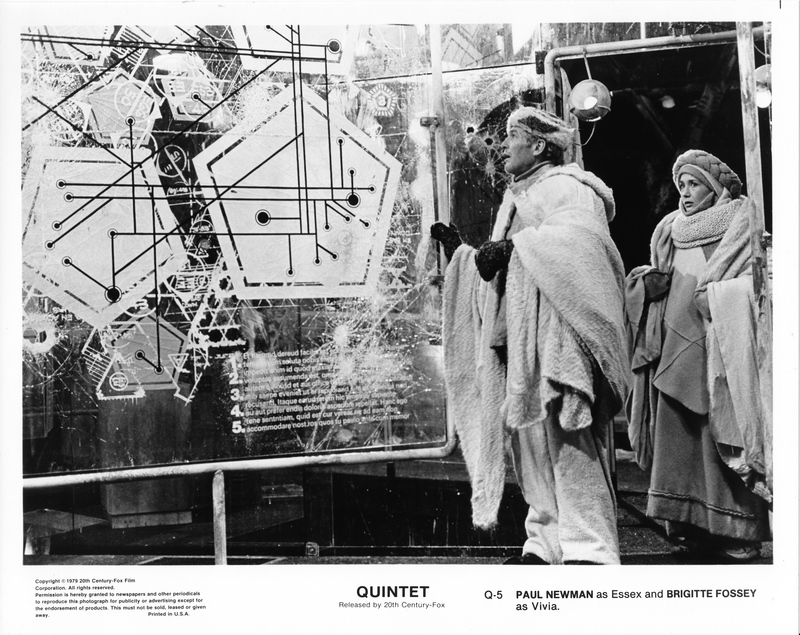 While Altman’s take on science fiction was not a success at the box office or with the critics in 1979, the film has often been noted for its strikingly futuristic and beautiful settings, and oddly medieval costumes.  Almost the entire film was shot on location at the abandoned and decaying site that had been built for Expo 67 (the 1967 International and Universal Exposition) in Montreal, Quebec. 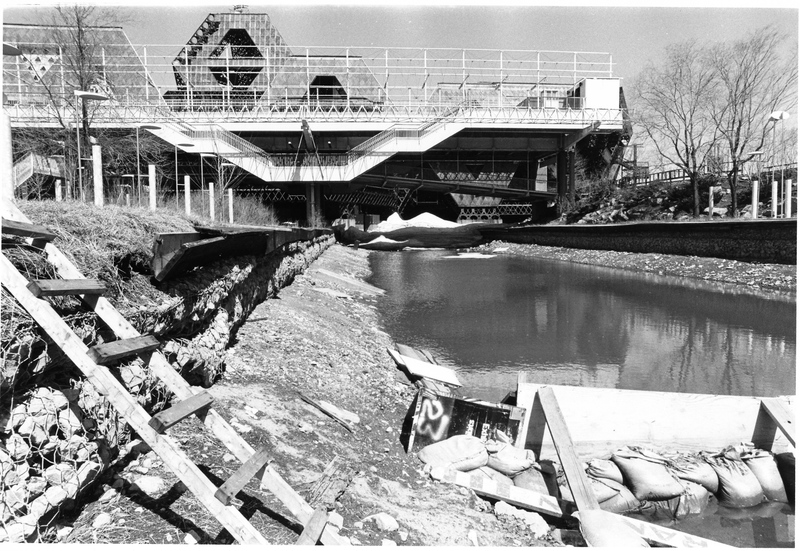 This large original painting by Canadian artist Michel Pellus (1945- ) is included in the Altman Archive.  Robert Altman commissioned Pellus, then in his 20s, to create the painting as a possible promotional item, but it was never used. Measuring about 3 by 4 feet, it portrays players of the game in front of the pentagon-shaped board with the two lead characters, Essex and Vivia, behind. 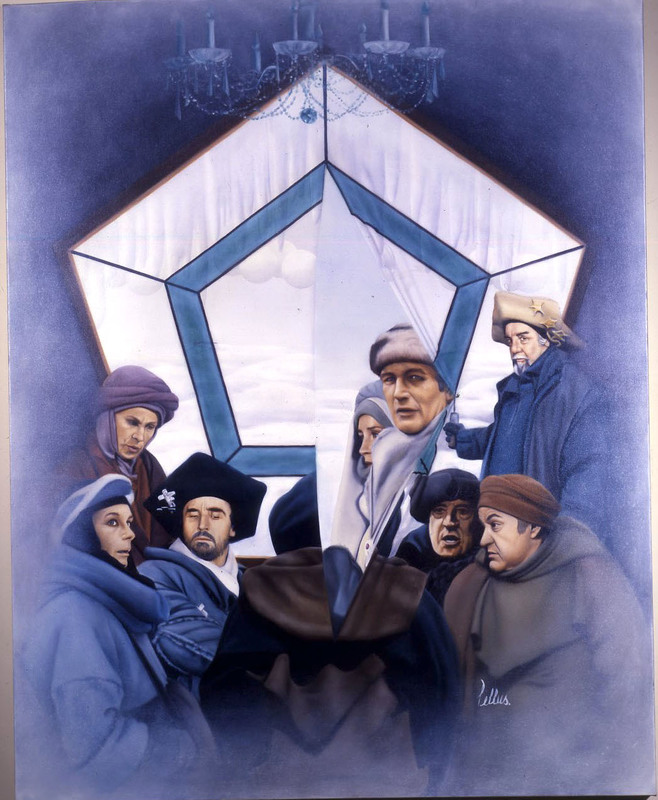 As early as Nashville, Robert Altman had had his actors mingle with the real stars of the Country & Western music capital.  Tanner ’88 is a much more ambitious and sly blending of documentary and fiction, written by Doonesbury creator Garry Trudeau and set during the presidential primary season of 1988.  It was created as an 11-episode miniseries for HBO and follows the campaign of fictional presidential candidate and former Michigan Representative Jack Tanner as he campaigns against Jesse Jackson and Michael Dukakis. 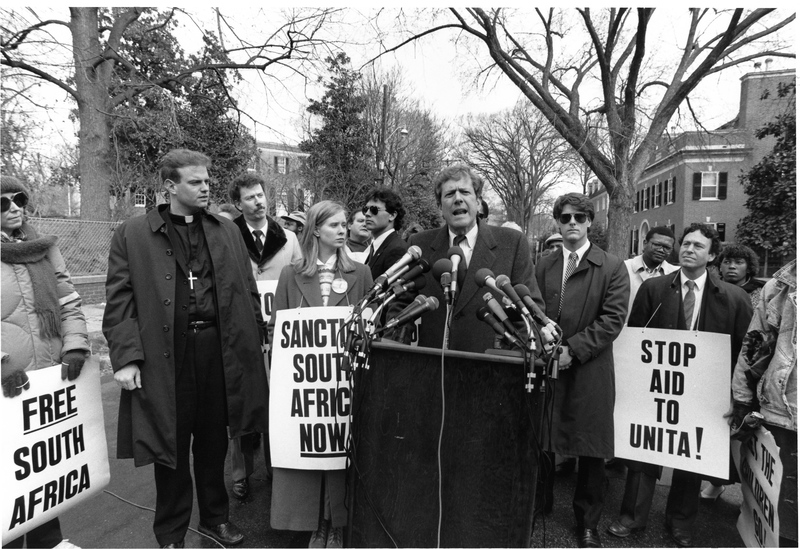 Photograph of Michael Murphy as Jack Tanner talking to reporters.

Taking stances on contemporary political issues, Jack Tanner (center) speaks to a group of supporters holding signs asking the U.S. to sanction South Africa for aiding the Angolan political party UNITA and to stop U.S. aid to it as well.  Altman’s crew would commonly film episodes of Tanner ’88 at actual political events and rallies.

One reviewer described this as “a kind of guerrilla filmmaking” and likened Altman to a sculptor using “found materials” since the other candidates were not told in advance that this fictional candidate would be among them on the primary circuit.  The series was rebroadcast in 2004 to coincide with presidential primaries that year. 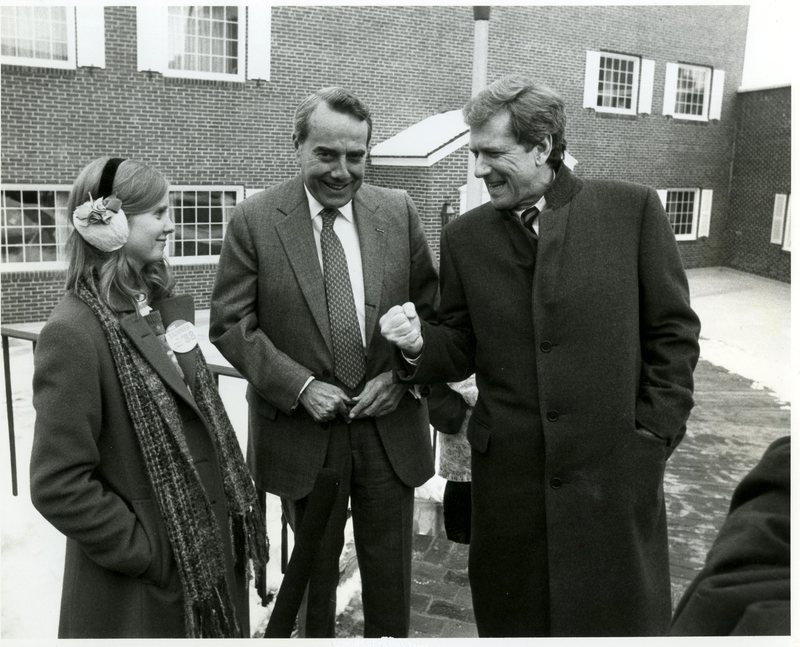 Photograph during the New Hampshire primaries, 1988.

Coincidentally, there was a John Tanner also campaigning while Tanner ’88 was being broadcast.  John Tanner (not to be confused with Jack Tanner, the character of the series) was successfully elected to Congress from Tennessee, and here humorously shares his condolences on Jack Tanner’s loss and invites Altman, actor Michael Murphy, and writer/producer Garry Trudeau to attend the celebration when he is sworn into office.  Altman graciously declined his invitation as the cast of Tanner '88 were off working on other projects throughout the country. 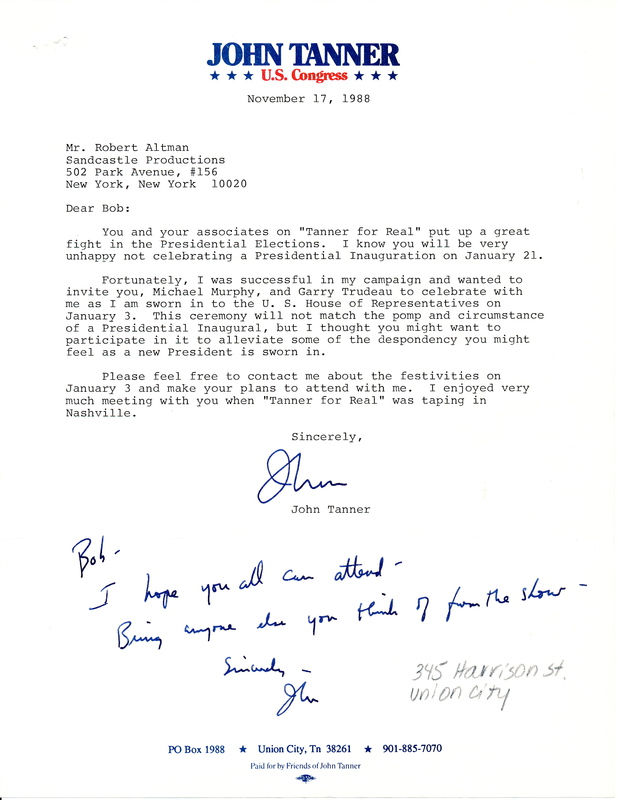 Gosford Park continues where the series “Upstairs, Downstairs” had gone in the 1970s with a focus on both the rich upperclass and its supporting staff, the many butlers, cooks, and footmen of a grand English estate, all within the context of a murder mystery.  In this case, however, even more emphasis is placed on the serving class, for it is only through them that the audience learns details about the characters “above stairs.” 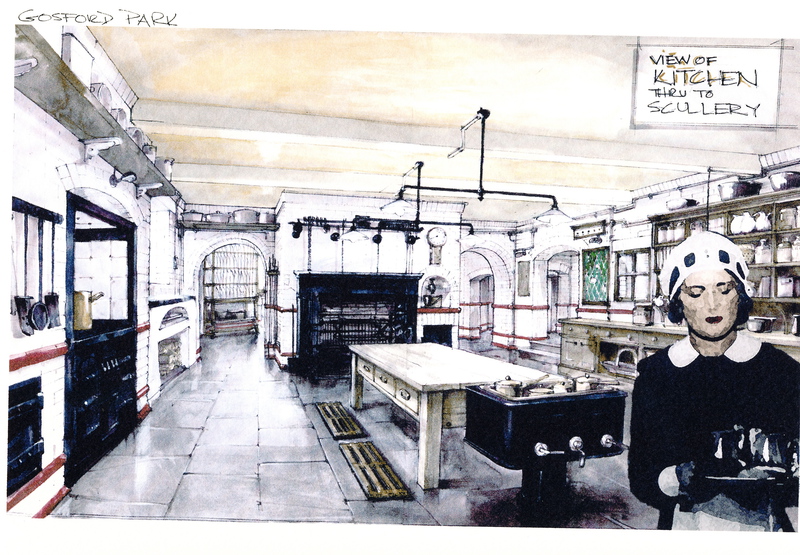 Although outdoor scenes and some above-stairs scenes for Gosford Park were filmed on location at Wrotham Park in Hertfordshire and Syon House near London, the below-stairs scenes were shot on sound stages.  The archive contains watercolor set renderings of the servants’ spaces by Robert Altman’s son, Stephen Altman, who served as Production Designer for the film. 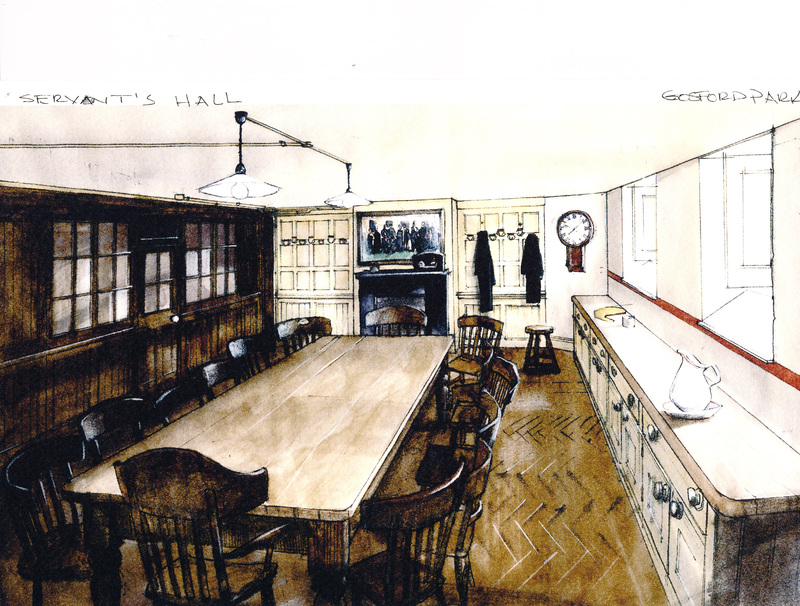 A faxed letter from screenwriter Julian Fellowes to Bob Balaban (actor and co-writer of Gosford Park) was also forwarded to Robert Altman.  In it, Fellowes describes his idea for the opening of the film, including a detailed account of chauffeured cars depositing guests at the entrance to the manor house, after which the cameras surprisingly follow staff into the servants’ halls.  Fellowes’s interest in pre-war country estates has continued with his current production of Downton Abbey for the BBC and PBS. 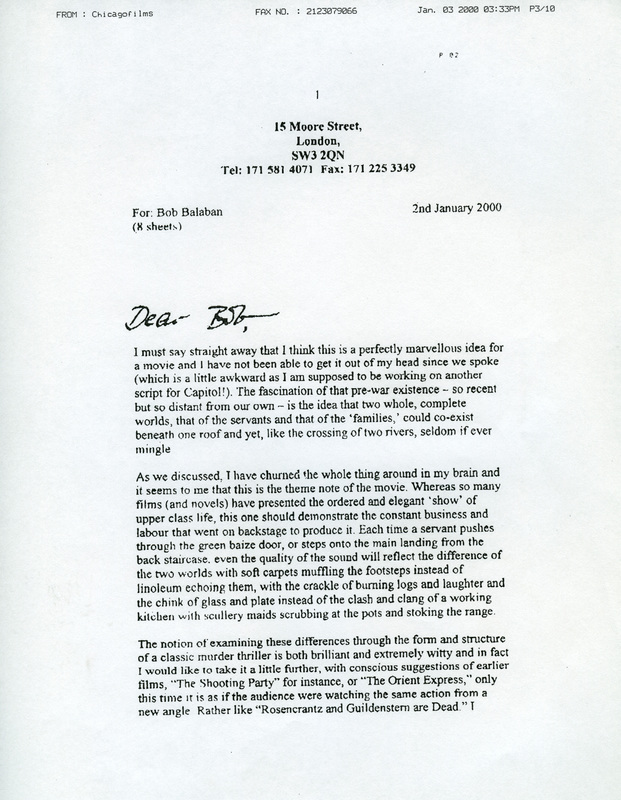