What is an Antiphonary?

The Background. While the Mass is a single occurrence originally instituted by Christ, the Divine Office consists of a series of prayers at set hours during the day, a practice derived from the Jewish tradition of community prayer in the synagogue. Within the Latin Church, the Benedict's Rule offers the most comprehensive account of the nature of the Divine Office, which ultimately became the non-eucharistic cycle of daily prayer in the Western Church. In general, the monastic pattern in the West consists of a sequence of prayer in the night (Matins), at dawn (Lauds), at the first, third, sixth, and ninth hours of the day (Prime, Terce, Sext, and None), at dusk (Vespers), and before bed (Compline). The heart of this daily prayer is the recitation of a selection from the Book of Psalms. In turn, the content of this daily routine depends on the ecclesiastical Calendar, which establishes the annual diary for the observances of seasons and special feast-days. In other words, each day is ranked, and its rank determines the content of the liturgy and the way it is conducted. The Calendar consists of the annual cycle of seasons (Temporale) and the annual cycle of feast-days (Sanctorale). The Temporale (or Proper of Time) reflects the main events of the life of Christ. For instance, the main days of the seasonal cycle are fixed in specific ways. Christmas, the birth of Christ, is always December 25, and Easter, the resurrection of Christ, always falls on Sunday, which changes each year according to the phases of the moon. The Sanctorale (or Proper of Saints) contains the fixed days of the feasts of the saints. For example, St. Patrick is celebrated on March 17. However, some communities might emphasize the celebration of certain saints, providing unique information about the provenance of a particular liturgical manuscript.

An antiphonary (or antiphonal or antiphoner) is one of the three liturgical books used for the Divine Office, the others being the breviary and the choir psalter. The antiphonary is so called because it contains, among many other elements, antiphons, which, in general, are short sentences sung or recited before or after a psalm or canticle. Antiphonaries are fairly large so that they are easily read by all the members of a choir. Essentially, the antiphonary includes the sung parts of the Divine Office for Sundays, feasts, and the Common of Saints (commune sanctorum, or a selection of text common to a category of saints). Specifically, the chants of the antiphonary include the antiphons sung with the psalms and canticles; the responsories of Matins and Vespers; and sometimes the hymns. Antiphonaries were divided into two sections. The first was based on the Temporale (starting with the first Sunday of Advent), and the second was arranged around the Sanctorale. 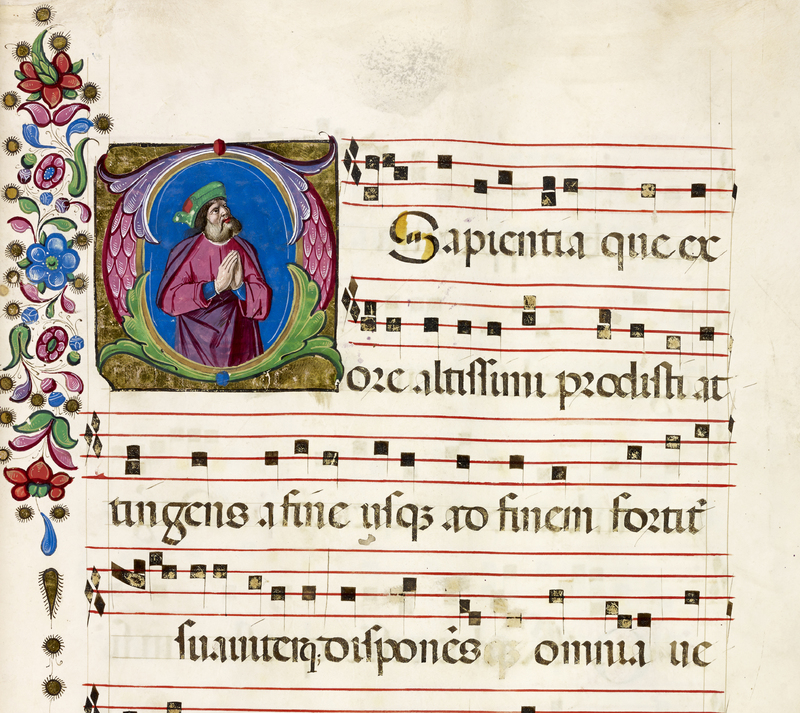 Sometime between 1494 and 1514, the Franciscan friars of San Nicolò della Lattuga in Venice, and probably with the assistance of some secular patrons, commissioned six richly illuminated antiphonaries covering the entire ecclesiastical Calendar: Temporale, Sanctorale, and the Common of Saints. 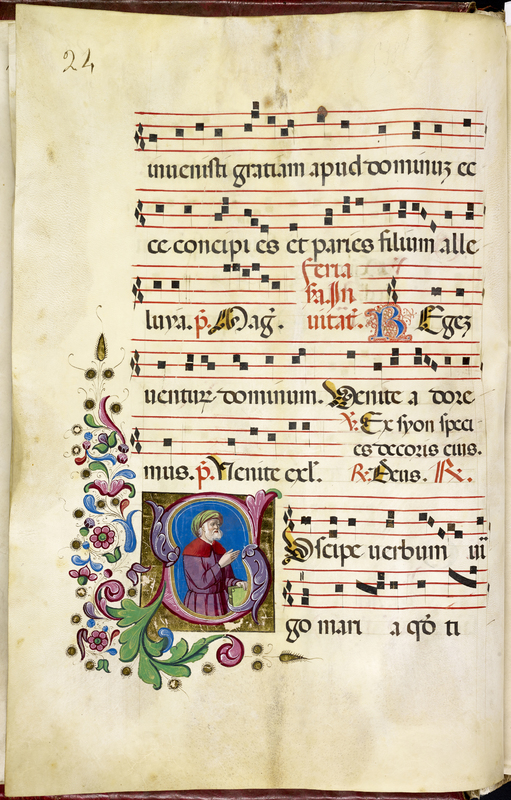 In recent years, art historian Lilian Armstrong has provided new evidence to reconstruct the content of each of these volumes. She has closely examined the four extant antiphonaries, from which many leaves have been excised, and a composite manuscript of forty-six folios, held in the Rossiana Collection of the Biblioteca Apostolica Vaticana (MS Rossiana 1195). Antiphonary no. 1 is held at the Special Collections Library, University of Michigan (Mich. Ms. 246); Antiphonary no. 3 is at the Bayerische Staatsbibliothek, Munich (Clm 30025); Antiphonary no. 4 & no. 5 are at the Museo Medioevale e Moderno, Arezzo (MS 1781 & MS 74); the locations of Antiphonary no. 2 & no. 6 are unknown, but a fairly accurate reconstruction is possible because folios from both the extant and missing volumes have been located in the composite manuscript of the Vatican Library (MS Rossiana 1195) and in a collection of eight single leaves at the Rare Book and Manuscript Library, Columbia University (Plimpton MS 40H). 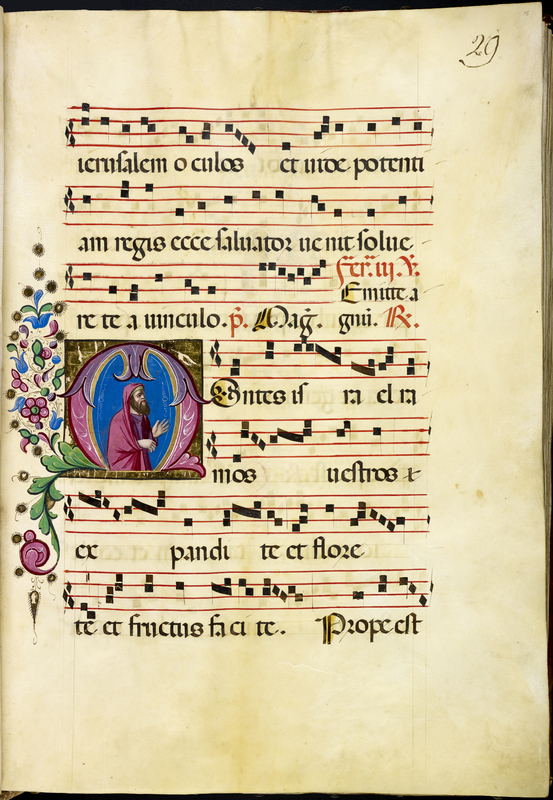 Our Antiphonary no. 1 contains the Temporale, Advent through Epiphany and Feasts to Jannuary 28. The illuminator has been identified as Benedetto Bordon or at least someone working in his workshop. Gabriela Angioli and Lilian Armstrong have established numerous stylistic connections between the decorated initials of the antiphonaries and others works signed by Bordon. 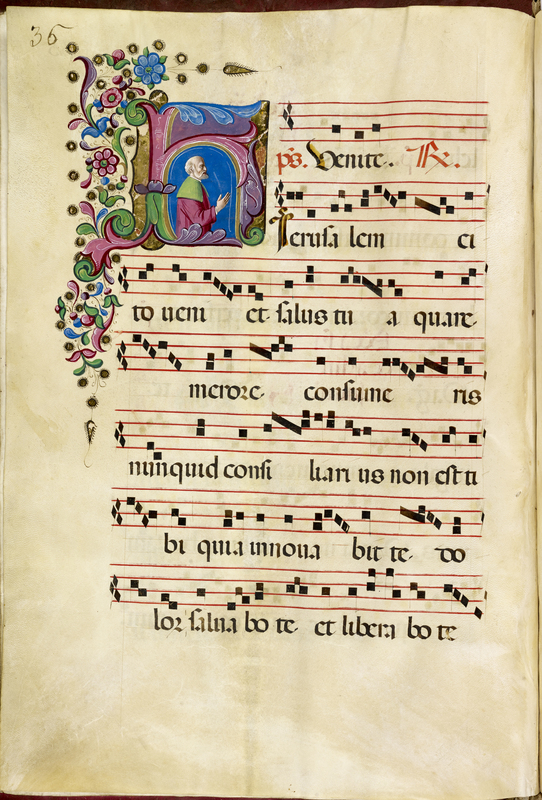 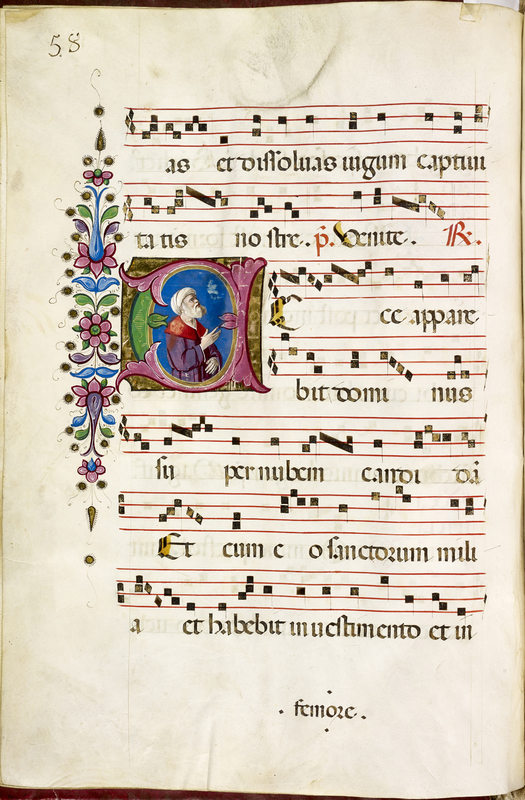 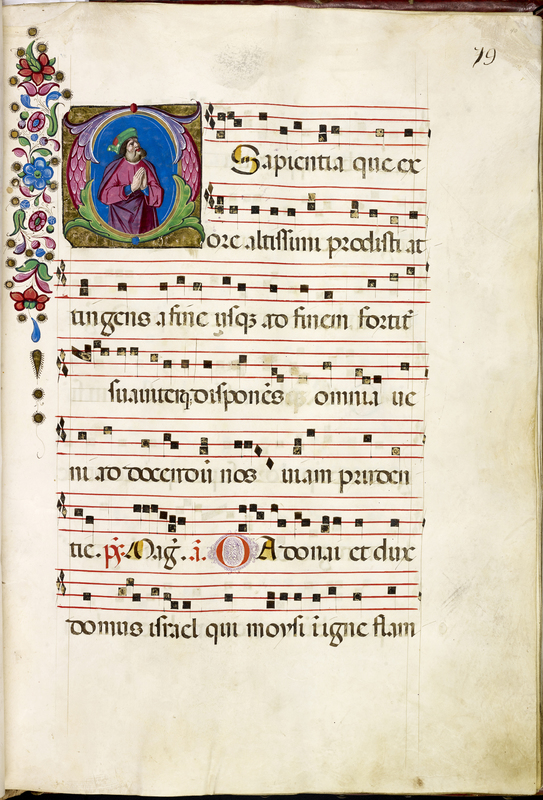 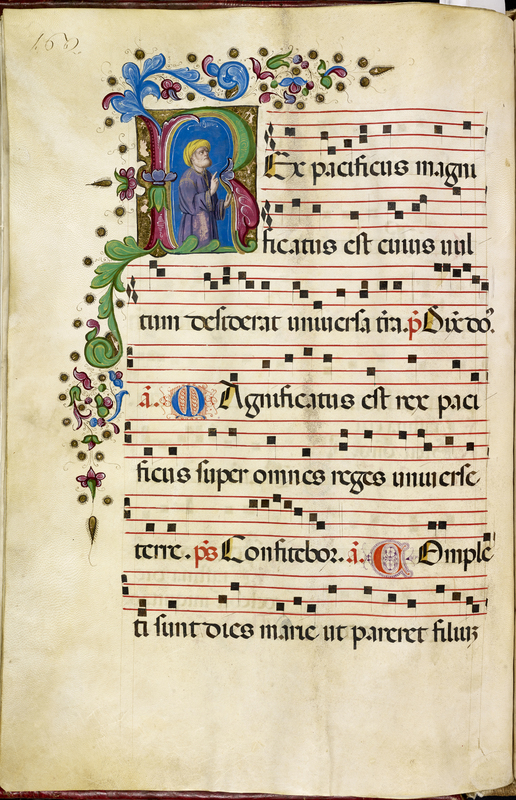 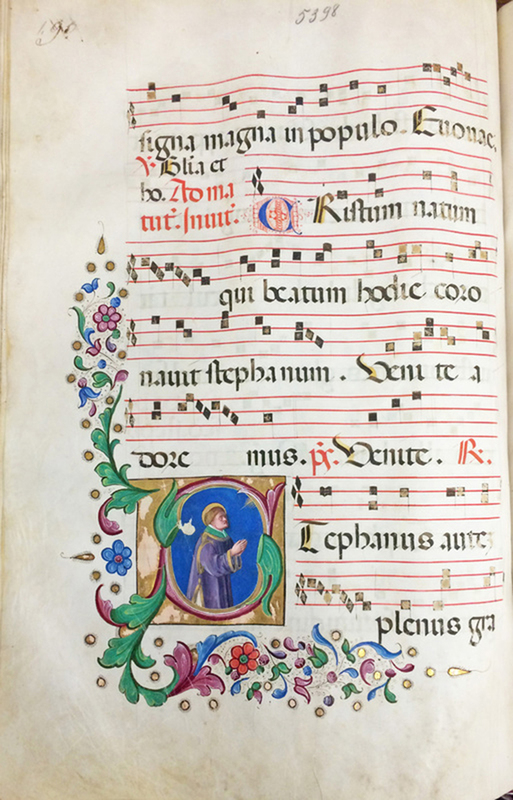 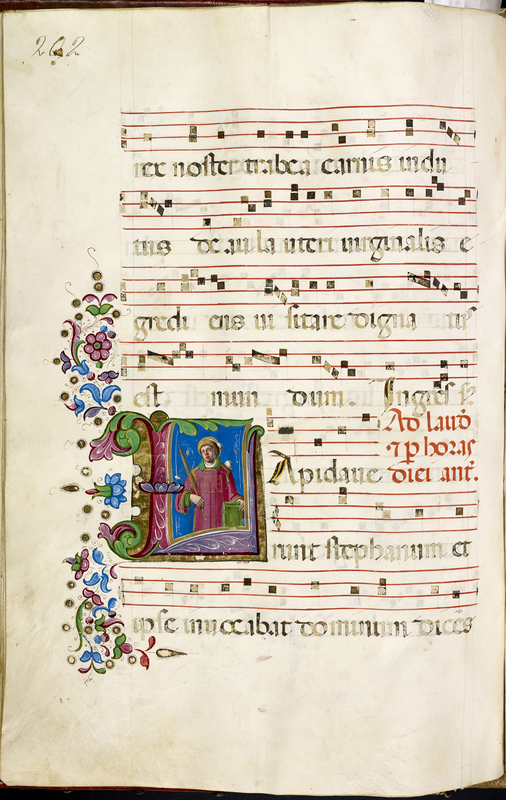 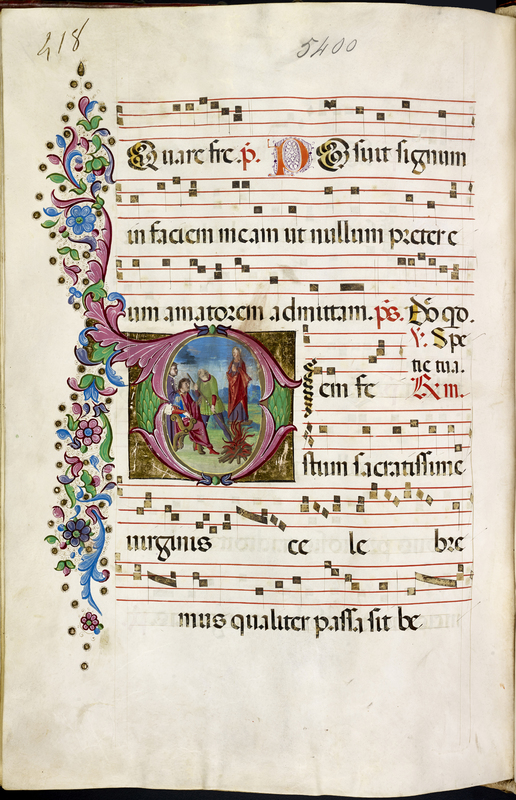 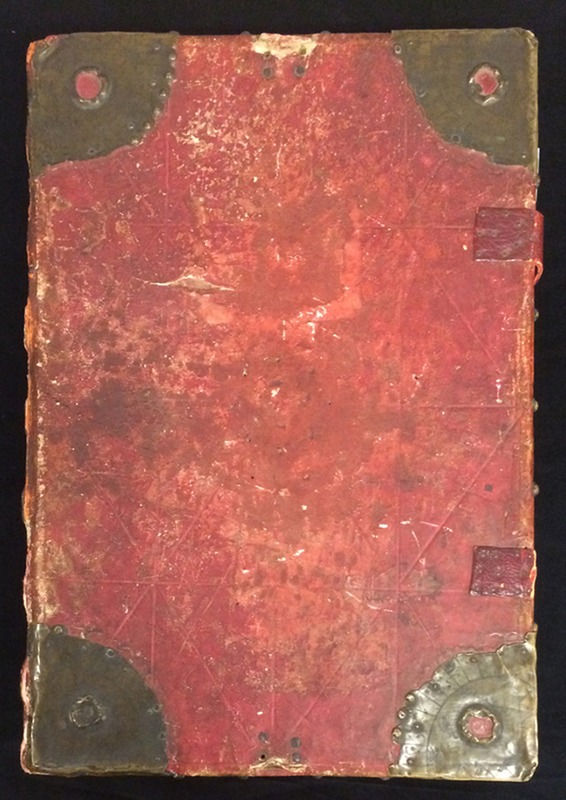