Fortunately, the career of Benedetto Bordon is fairly well documented. There is firm evidence that the family of Benedetto lived in Padua (Italy), where his parents were married in 1442. Though the date of his birth is unknown, we do know that he married in Padua in 1480. Sometime between 1492 and 1494, Bordon moved to Venice, where he remained until 1529. There is a series of documents illustrating Benedetto's professional activities in Venice. They are all requests to the Senate of Venice to obtain exclusive rights to print woodcuts and books: In 1494, he received a privilege to publish several Latin translations of the works by Lucian, which were printed in Venice by Simon Bevilaqua. In fact, images from this edition are displayed in this exhibit. On March 30, 1504, Bordon requested a privilege to publish a series of woodcuts grouped under the title The Triumph of Caesar, whose iconographical narrative is greatly indebted to Appian's description of the Triumph of Scipio. Next, on September 19, 1508, Bordon asked for a privilege to print two woodcuts, one of the entire province of Italy and another of a map of the world in the round shape of a ball ("in forma rotonda de balla"). Regrettably, there are no extant copies of this project. And finally, on March 6, 1526 Bordon made a privilege request to print the Libro di Benedetto Bordone, an illustrated book describing all the islands of the world. It was published by Nicolò Zoppino in 1528, and, again, images of a copy of this first edition are included in our exhibit.

Benedetto Bordon was above all a miniaturist, or miniator in Latin, as he was consistently described in the documents. To be precise, he was an illuminator of both manuscript and printed books. Artistically, his illuminations and woodcut designs reveal the technical skills of other contemporary Renaissance artists. For instance, this is shown in the carefully designed historiated initials of our antiphonary. In them, humans figures are placed in three-dimensional backgrounds; faces are represented in a naturalistic fashion; and the intensity of the colors Bordon used echo the style of other Venetian painters of the time, like Titian and Cima da Conigliano. Intellectually, Bordon had a deep knowledge of the world of classical antiquity, launching several projects to edit and translate classical authors, as manifested in several of his printing adventures.

Bordon made a will in Venice in 1529, leaving, for instance, all his books of astronomy and philosophy to his son Giulio. In the following year, he made another will in Padua, where he died so0n after and was buried in the Church of San Daniele. 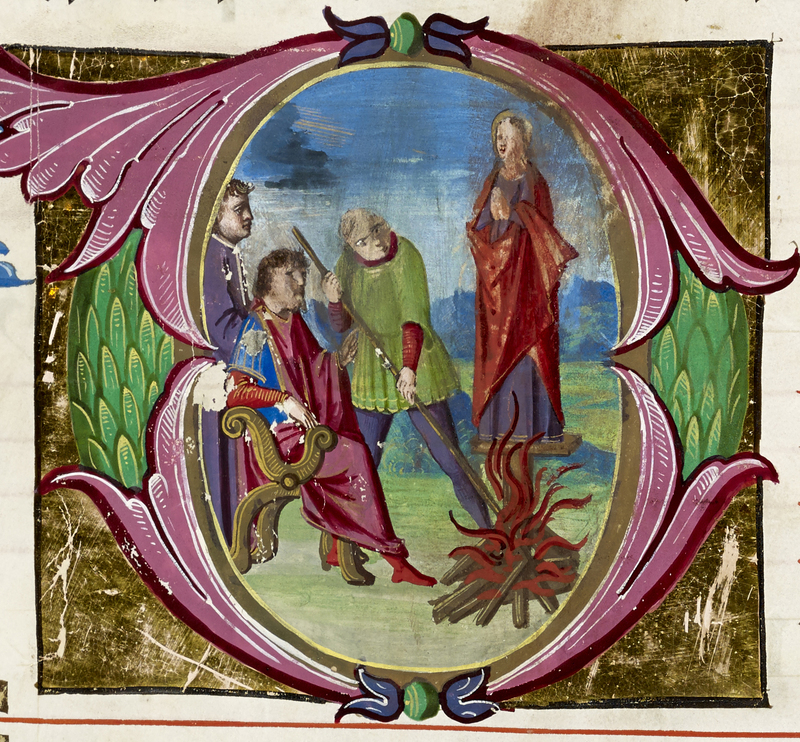 Depiction of the Martyrdom of St. Agnes

What is an Antiphonary?