A partial cover with a later spine repair. The cover measures approximately 18.5 cm high by 15 cm wide. The interesting elements on the outside of this upper cover include the leather spine repair, the leather lacing that attached the spine repair piece to the original cover, the holes pierced along the cover edges for attachments, now missing, and evidence of the one remaining leather loop attachment, meant to catch on a button or toggle on the opposite cover, just visible on the bottom right corner of the cover as a stub end emerging from a hole. The most compelling elements are the decoration: incised lines and a cruciform cutout (the triangular shapes recall the fish-spear design of a Cross Barby meant to symbolize Christ). The cruciform  is achieved by cutting out four triangular areas that compose the ends of crossed lines. This cutout area is backed on the inside of the leather with several pieces of parchment fitted together and large enough to back all four cutouts; study the area in the photographs to your right. The parchment pieces may have been gilded or painted on the outside to show through the cutouts, but if so, the medium has worn away. 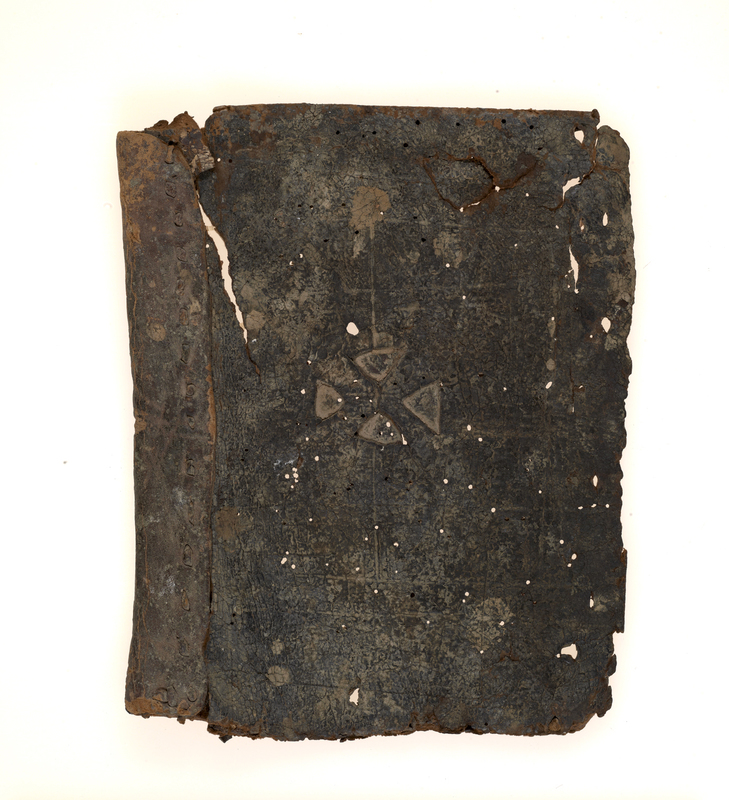 Inside the cover of 4972a, this image shows fragments of the papyrus cartonnage and other materials that once lined the cover: a leather loop in the bottom corner, a fiber cord tacket near the base of the spine repair piece, and the leather lacing along the left edge of the spine repair piece that parallels the lacing on the right edge on the upper cover. Note the lifting edges of the parchment pieces used to back the cutouts. 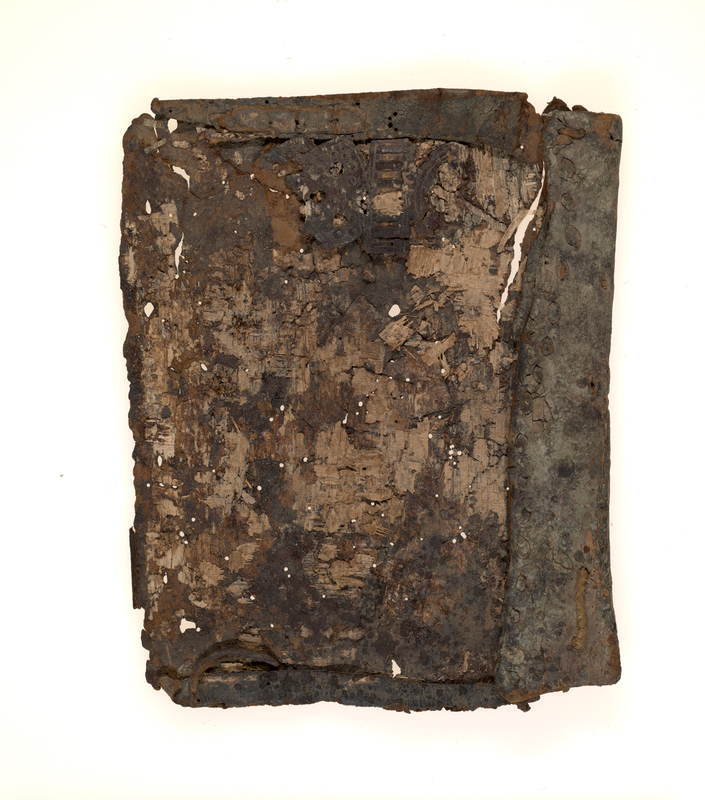 A decorated leather fragment, perhaps from a book cover, has been recycled and forms part of the cover lining. It was tooled in blind with straight and curved lines and annular dots, and accented with punched out circles that would probably have been backed by plain, gilded, or painted vellum or leather, or filled with a painted circle of leather as an inlay. There is also a bordered area with a line of horizontal slits made down the middle of the fragment that were laced with parchment strips as a contrast decoration; fragments of the lacing strips are still visible. 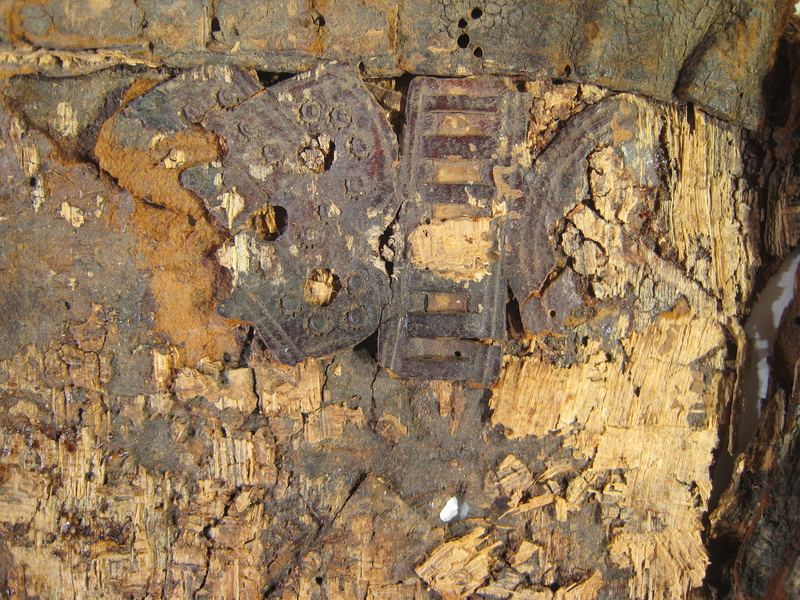 This fragment is also assigned to the 4972 inventory number but the two cover fragments, a and b, do not have any apparent connection aside from possibly being acquired at the same time. The two small fragments shown with 4972b appear to match it much better than 4972a. They and the main fragment show some evidence of attachments, but the overwhelming impression is that odd bits of material that may have been part of a binding once were clumped together to appear to be a book cover. There is very little information about the acquisition of these two fragments; they are briefly mentioned in the general inventory indicating they were acquired in the 1920s as part of a large lot of papyri. 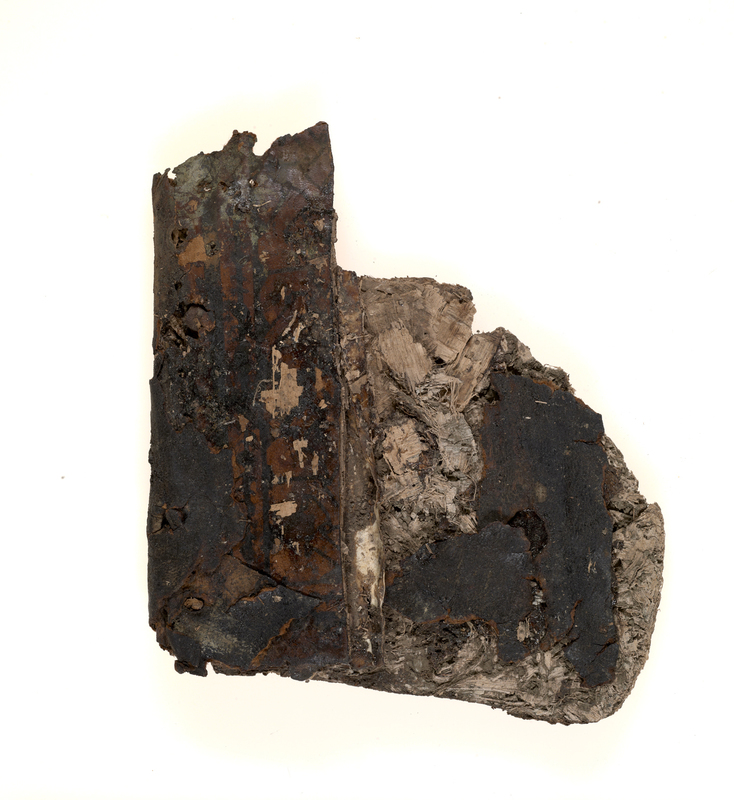 Note by Charles Lamacraft, former Curator and Binder at the British Museum

Charles Lamacraft, former curator of bindings at the British Museum, wrote a note describing what I believe is 4972b. This note was stored with the two fragments, 4972a and 4972b. Below is the transcription:

No. 6… 4972… Coptic. Many fragments belong to a (‘a’ crossed out) Very Ancient Manuscripts… One Binding of a Coptic manuscript with two leaves. From the Fayoum. Price 20 pounds. The Coptic ms is a modern production the old binding being covered with two leaves (fragments of vellum & then covered over with old leather). In the sewing remains sections of original work. The place of the missing leaves is filled with rubbish. The Vellum leaves have been lifted and returned separately.

No record exists of the two vellum leaves he mentions; it is not clear if ‘returned separately’ meant they were sent to the University of Michigan or someplace else. Lamacraft was a binder and restorer and probably lifted the vellum leaves himself. 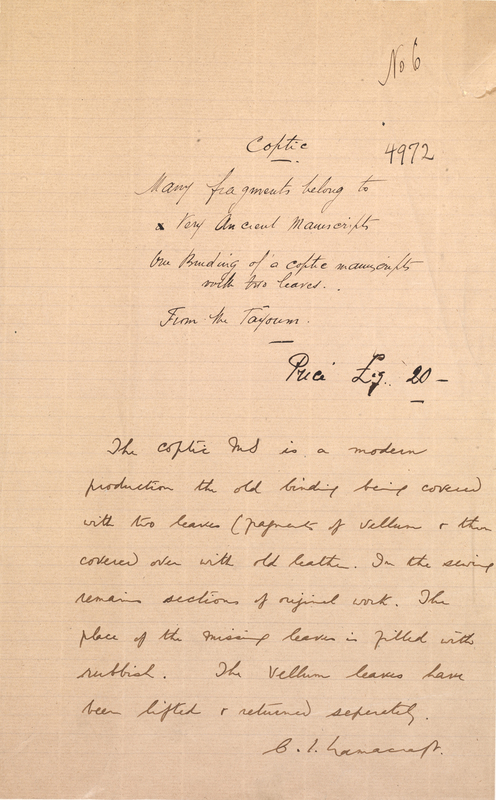 Note by Charles Lamacraft, former Curator and Binder at the British Museum