Imagining the Other at Home II

Raspberry Jell-O served on a glass platter decorated with fresh raspberries and their leaves stands in contrast to the snowy scene in Under Northern Lights. A well-bundled figure arrives carrying a box of Jell-O, met by two excited children and a woman. Warm light pours out of the house and illuminates the snowy scene. “Far-fetched?” viewers are imagined to wonder, “Not a bit of it, expect in the sense that this box of Jell-O has been brought a long, long way.” Reader doubts about the existence of these customers are assuaged: “...we do have customers who live under the Arctic Circle, and who say cold, hard things of us if we do not arrange for shipping connections before the trails are closed with the winter’s snows.” Cold, hard words can be avoided with soft Jell-O, though fresh raspberries may be available only in season. 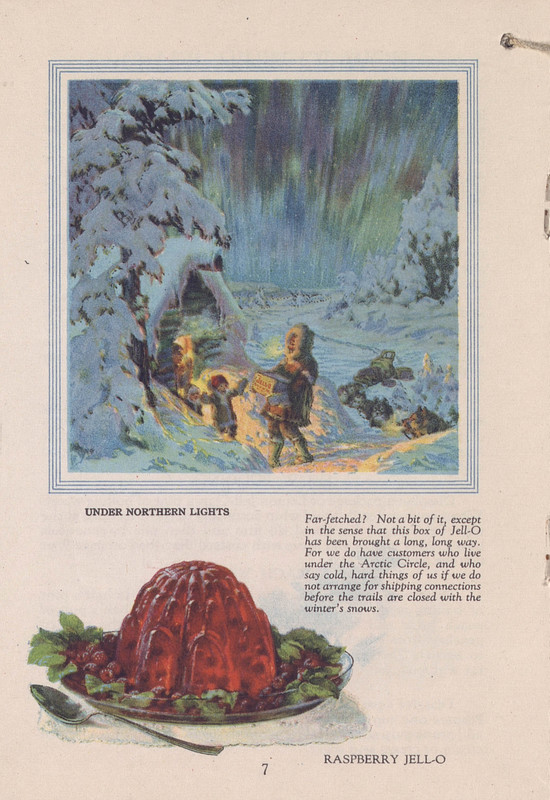 At Home Everywhere - Under Northern Lights

In light dappled by grapevines and verdant trees a Padre rings a bell In the Mission Country. In his other hand, he holds a large Orange Jell-O dessert, mirroring the illustration at the bottom of the page. Simple Jell-O, we are told, “is in keeping with the strictest fast days, and in its fancy forms will measure up to the standard of a feast day.” The dominant American narrative of westward expansion sometimes obscures the older European colonization of the western states. San Diego, for example, was permanently occupied by the Spanish in 1769. Fast day or feast day, this Jell-O is obviously the same product, remade and re-imagined, versatile, adaptable and suited to the “many-sided America.” 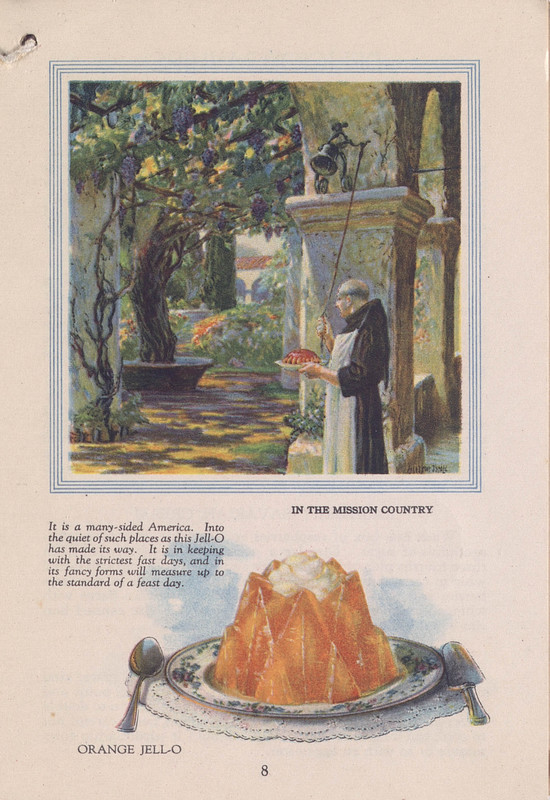 At Home Everywhere - In the Mission Country

Originally published in 1922 as "Mammy Sent Dis Ovah" this Angus MacDonall piece, republished here as In Dixie, shows a white woman reclining in a large chair. She is dressed in simple silk robes, with an open book resting on her lap. A cup, a plate and a pitcher sit on her cane side-table. Her elegance is interrupted by the arrival of two black boys, one of whom presents a golden Lemon Jell-O. Thickened with racist nostalgia for an imagined past, “Jell-O costs so little that it may be found in the most unpretentious homes of the old plantation. It is delicious enough to be accepted by those at the ‘Big House’ who have cultivated good living as a fine art.” 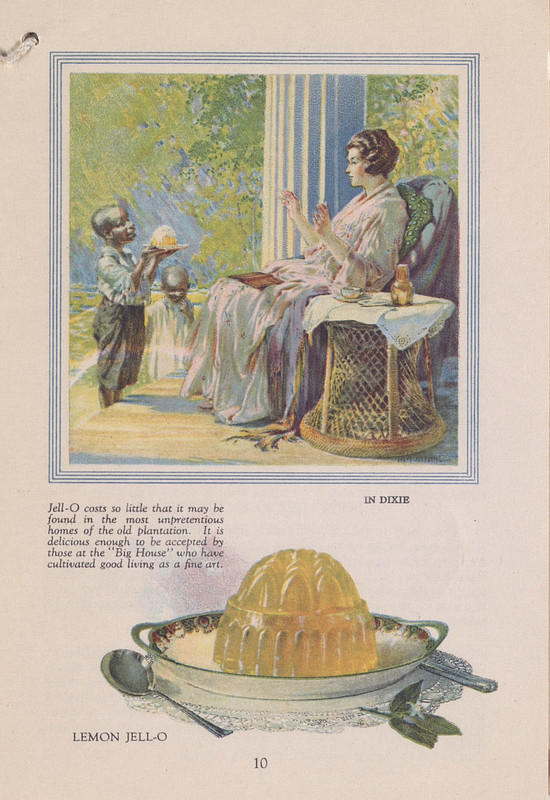 At Home Everywhere - In Dixie

On the Prairies two women look out over a vast dry land. Plates, flatware, four large stacks of bread, red Jell-O, and several pitchers fill the table behind the women. The vast land, however, is shown empty of people. This is the American Farm Wife, symbol of the lonely plains, source and upholder of plain hearty Good American Cooking, preparing a harvest-time supper for the hands.  The frugality of farm life is underscored by the text: “In the Wheat Belt a thing has to prove its worth before it finds a place on a table like this.” The Jell-O dish accompanying this illustration is not a dessert, but rather Imperial Salad. A concoction of Lemon Jell-O mixed with vinegar, canned pineapple, pimentos and salted shredded cucumber, set in individual molds and dressed with cream salad dressing, Imperial Salad suggests the conquering of seasons, of good taste, and in this setting, of the land. 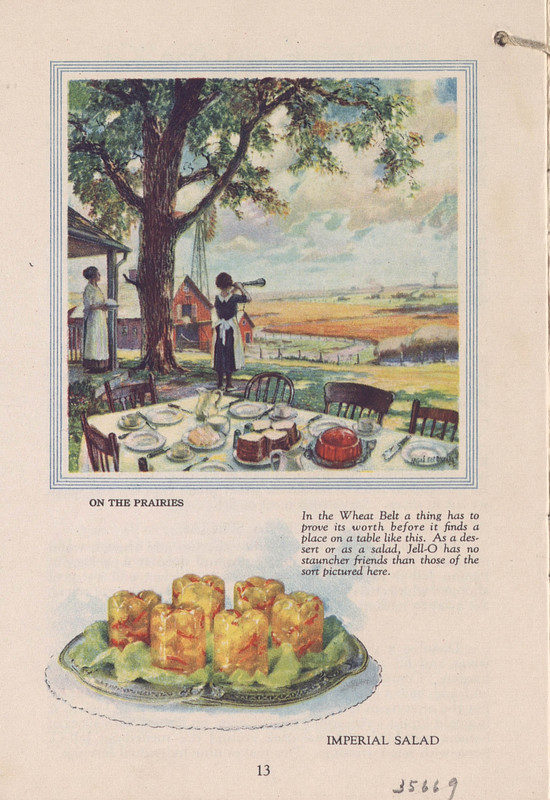 At Home Everywhere - On the Prairies

The back cover of Jell-O America’s Most Famous Dessert: At Home Everywhere is dominated by the fall foliage of New England. A child and an old man, perhaps his grandfather, sit on the stoop of a substantial clapboard house. The illustration appears to have been influenced by the nationalistic sublime of the then-unfashionable Hudson River School of painting – wild and beautiful American landscapes, vast nature made both vaster and intelligible by tiny humans wielding mighty industry.  The text of the advertisement focuses on production and distribution: “No matter where you live, this perfect package brings Jell-O to you as fresh as when it is packed at the factory.” Standardization and mechanization are ‘at home everywhere,’ in part because home is imagined as the same everywhere, in all the ways that matter. Jell-O’s America is bound together by this shared experience, a community imagined, and imaginable, through consumption and a gustatory experience repeatable and replicable. 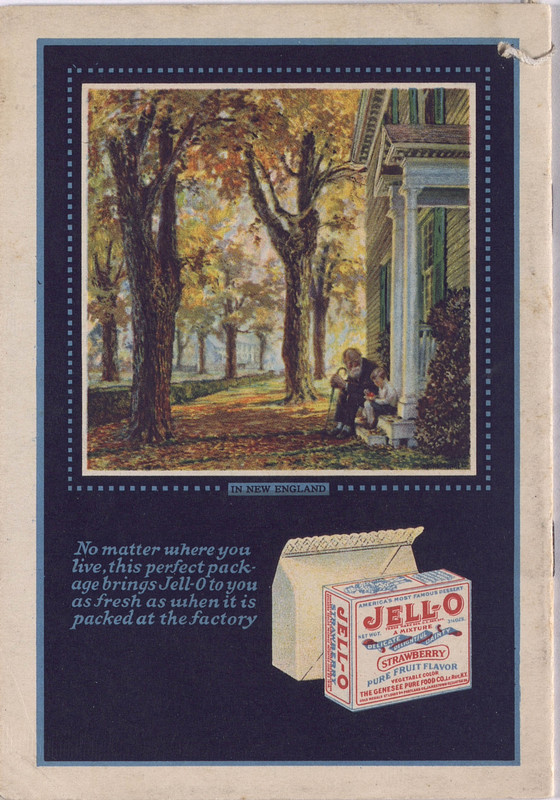 At Home Everywhere - In New England

Jell-O, America's most famous dessert, at home everywhere (1922); [back cover]

Imagining the Other at Home I