Imagining the Other Overview

In the aftermath of World War One, it is popularly imagined that a non-interventionist America turned away from the world; this inwards focus is strikingly absent from the Jell-O advertising of the era, which is remarkably global in outlook. Orientalist, and racist, but global nonetheless. From Dutch kitchen scenes to Company Luncheons graced with Buddha figurines, the Other was imagined: sometimes as Jell-O consumer, sometimes as too Other to consume.  Multiple contradictory meanings are embedded in these images. Some work to draw America’s migrant populations into the American/Jell-O story. Others work, in Edward Said’s terms, to define what America/the Jell-O brand is by showing what it is not. It is not kimono-wearing, Russian tea-drinking, Hawaiian natives. Simultaneously, these advertisements work to make Jell-O seem sophisticated, and those who consume it, worldly and cosmopolitan. 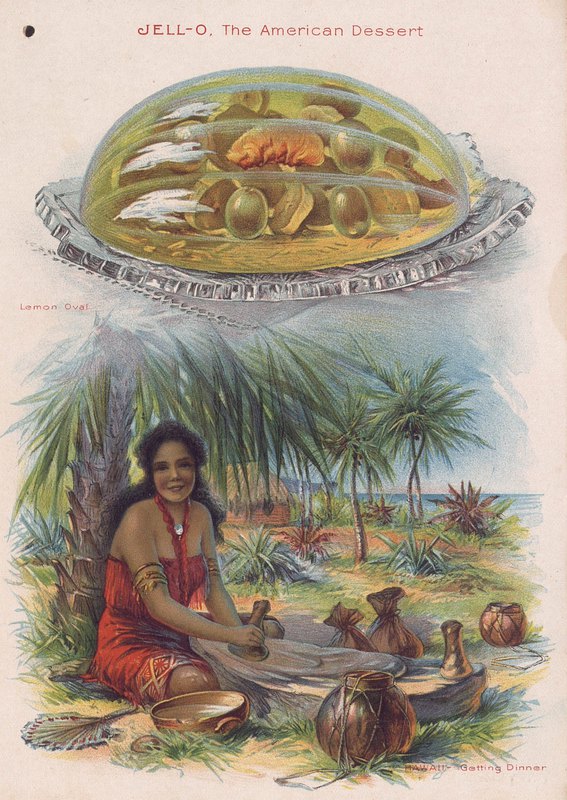 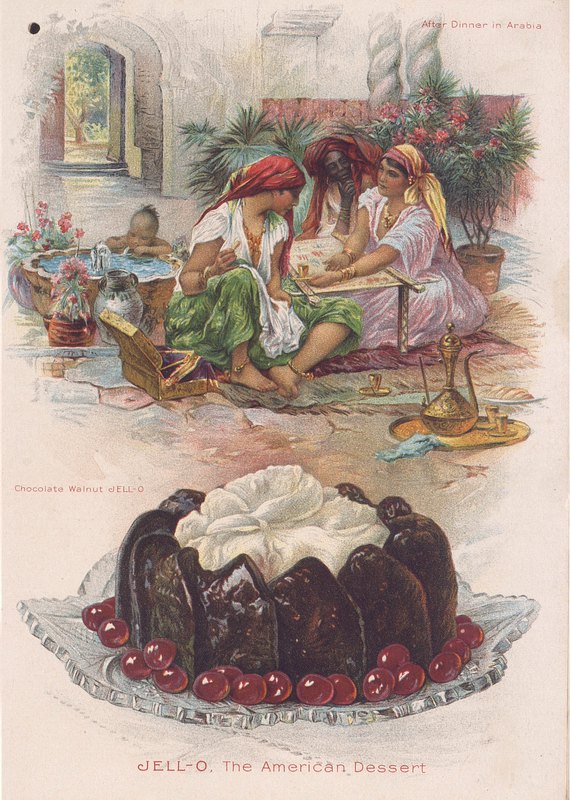 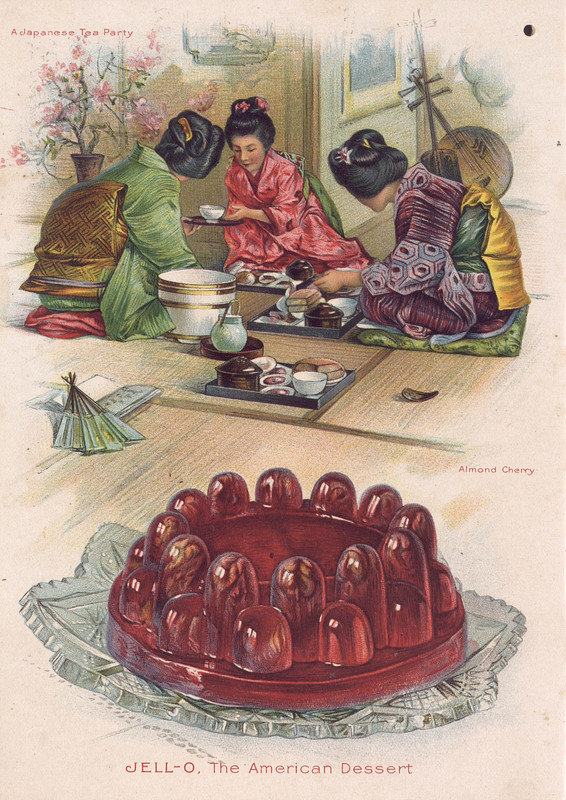 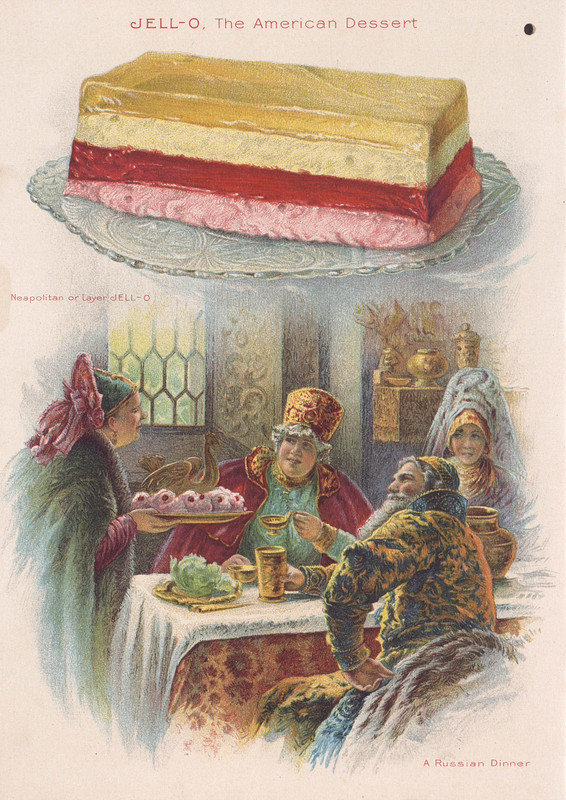 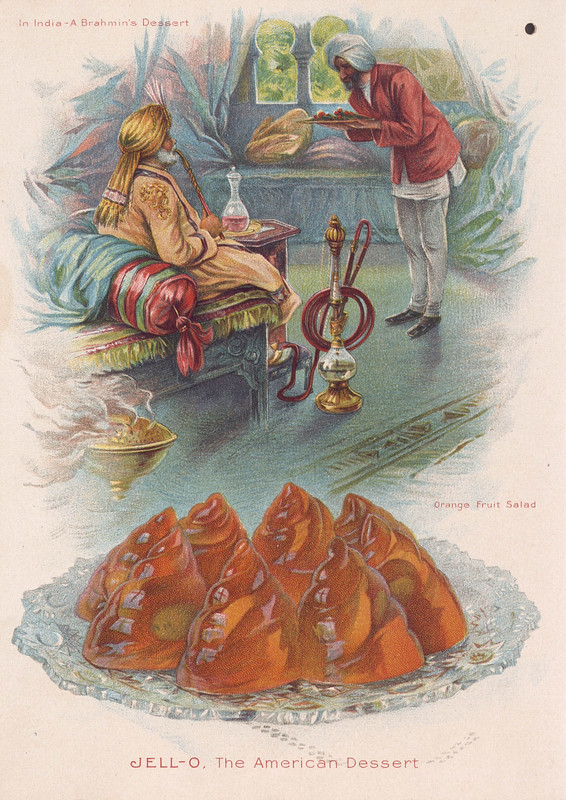 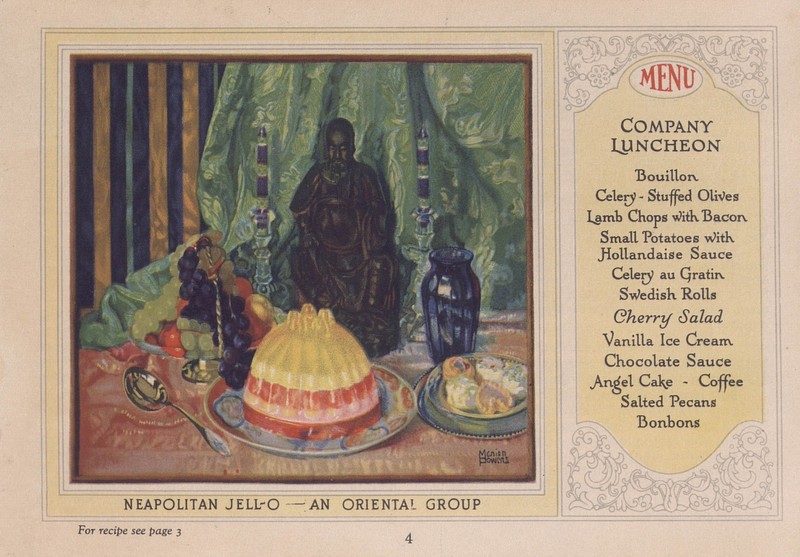 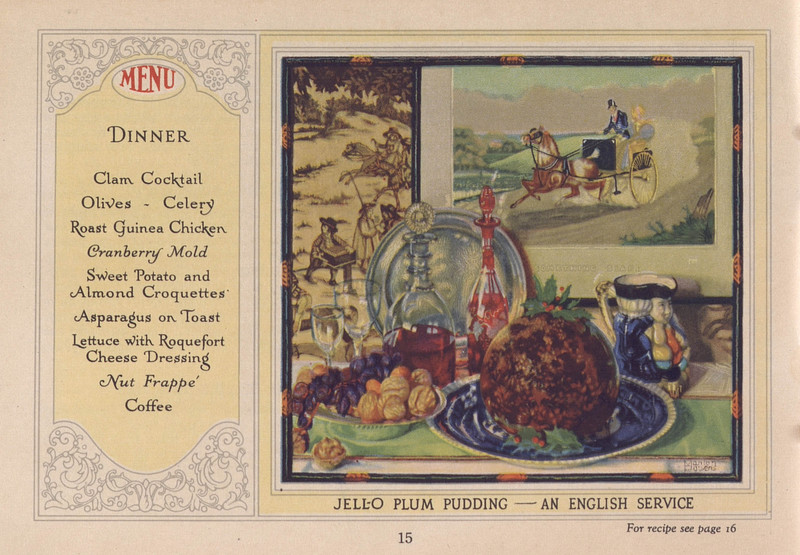 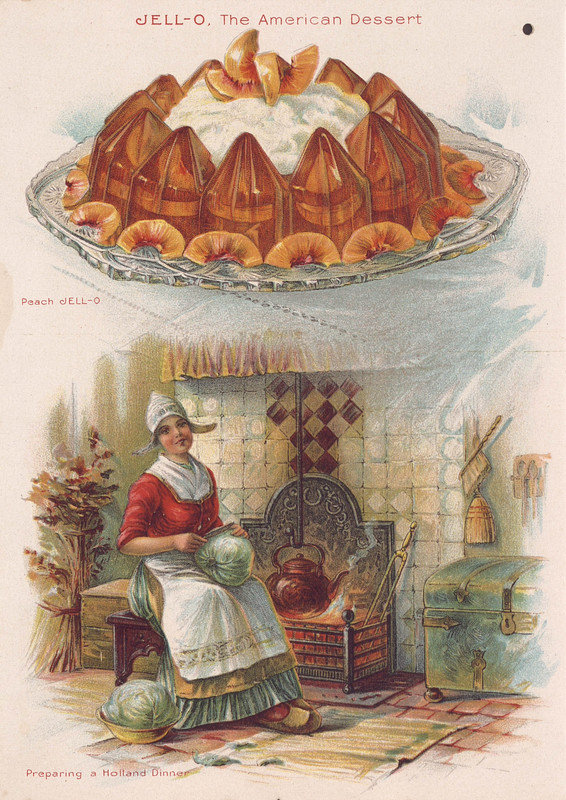 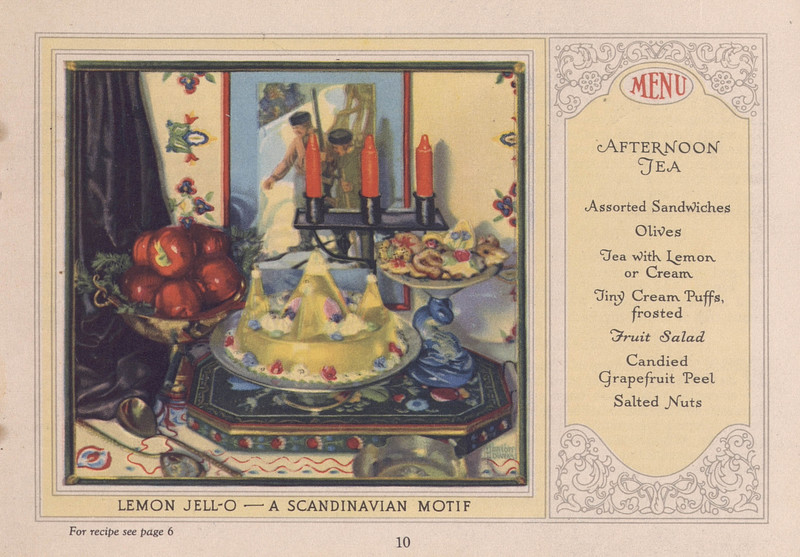 Imagining the Other I

Published in 1909 Desserts of the World is a lavishly illustrated book containing recipes and images of imagined food preparation and consumption around the world. The introductory material structures the culinary history of the world as beginning in the East (Turkish, Persian, Indian) claiming that: “returning Crusaders brought Eastern cooks and Eastern culinary methods” back to Europe. The text is framed by images of landmarks (Gibraltar in Spain, the Castle of St. Angelo in Italy, The Arch of Triumph in France and the Morro Castle in Cuba), which illustrate these claims of history. In a moment when the idea of home cooking has to be explicitly distinguished from regular cooking, “France and America lead in all that is best in cookery.” Sophisticated cookery is framed as the reserve of professional cooks.  As such, the recipes in the collection are for American desserts that can be made without a cook – and here, ‘without a cook’ signifies American classlessness. 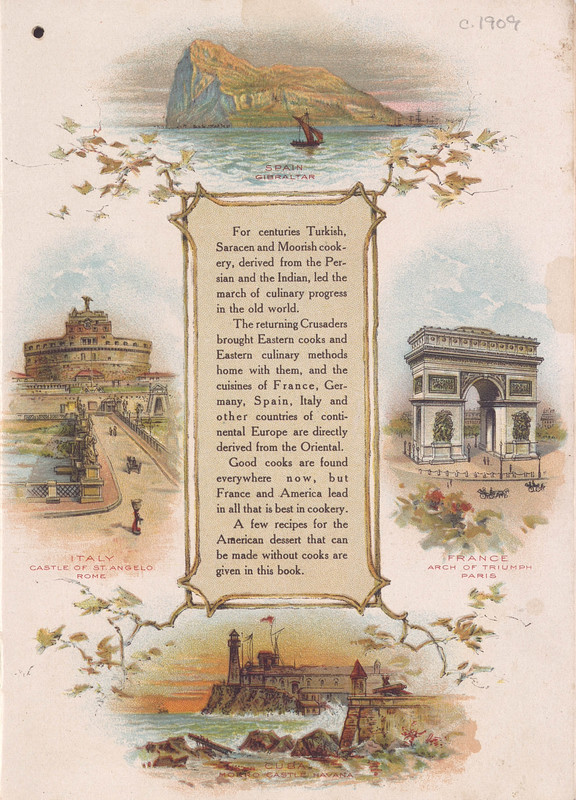 Desserts of the World - Introduction

In After Dinner in Arabia three women sit on a carpet around a low table sharing Turkish coffee and pastries. Their heads are covered in colorful scarves and their bodies adorned with golden necklaces and bracelets. Bare feet, flowering palm trees, a naked boy playing in water, and a golden chest complete the Oriental scene. The women form a circle, which is visually mirrored by the Chocolate Walnut Jell-O dessert below them; white and brown, brown and white. Chocolate Jell-O is mixed with walnuts and figs, referencing the sweetmeats of Arabia in the accompanying text, topped with whipped cream, and encircled with a ring of glacé cherries. A dozen years before Rudolph Valentino mesmerized millions in The Sheik (1921), the bare legs, arms and feet of these women suggest a private scene, and the peculiar intimate voyeurism of exotic and erotic Orientalist constructions.

Desserts of the World - After Dinner in Arabia

In the US territory of Hawaii, “the better classes,” readers were told, “have generally adopted the food customs of the American and European settlers.” Depicted as ‘traditionally’ dressed, the female figure in HAWAII Getting Dinner is grinding taro root to make Poi. Pounder in her hand and a bowl by her side, she is not intended to be read as of the “better classes.” A Lemon Oval – Lemon Jell-O made in an oval mold with suspended fruits – peaches, bananas and grapes – hangs above her. Palm trees, mountains in the background and the dinner getting activity imply a simple life; the physical environment providing a metaphor for its inhabitants. Dominated by just a few companies in the decades prior to statehood, Hawaii produced a significant amount of sugar for US markets. The 1920 Oahu Sugar strike is a landmark of US labor history.

Desserts of the World - HAWAII Getting Dinner

Three kimono-enrobed women kneel in A Japanese Tea Party. The accompanying text compares the women to porcelain, noting that a Japanese dinner party is a beautiful affair “with its gaily decorated ensemble, including the diners themselves, in their many-colored costumes.” The women hide their faces from the voyeuristic viewer, but beyond them we see a series of recognizably Japanese objects - fan, cherryblossom, string instruments, and of course, the tea paraphernalia. The Almond Cherry dessert at the bottom of the page shows cherry Jell-O set in an ornate mold with twenty-four rounded peaks, with a nut enrobed in each peak.

Desserts of the World - A Japanese Tea Party

The wealth of Tsarist Russia is displayed by copious golden ornamentation in A Russian Dinner. The regalia of the robust central figure includes a large gold hat, a red velvet cloak with gold collar, golden necklace, and gold cuffs. He holds a golden goblet and is served from a golden platter (replete with gold swan) by a fur-robed woman. Two other figures share the table, also wearing and holding gold.  Seven years before the death of Rasputin, Jell-O indirectly linked to the Russian Orthodox Church with unstructured food consumption. Religious fasting mattered, but: “at all other times the Russian who can afford it, with no fixed meal time, eats when and what he wills.” Housewives and cooks in Russia “know nothing about Jell-O” and must despair, the text suggests, when called upon to produce a dessert. A four-layered Neapolitan Jell-O, two different flavors of Jell-O, some plain, some whipped with cream, tops the page.

Desserts of the World - A Russian Dinner

In India a Brahmin’s Dessert is a bricolage of Indian imagery - a Sikh servant, luscious silks, a hookah pipe, ornate carpets, incense, Indo-Islamic arch windows framing a verdant land. The deep foreignness of India is emphasized textually as well; “the natives of torrid India have an insatiable craving for the hottest dish on earth. This is the Indian curry.” They may eat fruit and sweetmeats “but their relish and their dessert at nearly every meal is the fiery curry.” In contrast, Americans prefer cool and refreshing Jell-O desserts such as the Orange Fruit Salad which accompanies this illustration. Eight single peaks of orange Jell-O studded with fresh fruits form the orange crown and, a triply-inaccurate contrast to the “East Indian’s diet” which “would kill” an American “in a month.”

Desserts of the World - In India a Brahmin’s Dessert

A Dutch woman, complete with wooden clogs, sits in the kitchen in Preparing a Holland Dinner. The dinner appears to consist of two cabbages, one in preparation in her hands, resting on her white apron, another waiting in a bowl; they may be destined for the large kettle steaming on the stove behind her. This image does not have its own text but rather shares a composite text on European desserts with the succeeding illustration, A Parisian Cafe Scene. Peach Jell-O sits above the kitchen scene. The shape of the Jell-O cones echo the voldendam cap worn by the figure.

Desserts of the World - Preparing a Holland Dinner

Formally dressed men and women sit or stand in A Parisian Cafe Scene drinking wine and socializing. “French chefs” readers were told “are exceptionally skilled in the evolution of new desserts” and consequently there is “nothing more delightful than the different forms of Jell-O desserts prepared by French cooks in America.” The different forms include alcohol and the dessert featured in this illustration is the ancestor of the Jell-O shot: Wine Jelly. Lemon Jell-O is mixed with fresh lemon juice and sherry wine, cut up and served in sherbet glasses with a cherry on top. Jell-O might be an unlikely item to be served in a Parisian café, but here Paris is shorthand for sophistication and Wine Jell-O a sophisticated dessert. 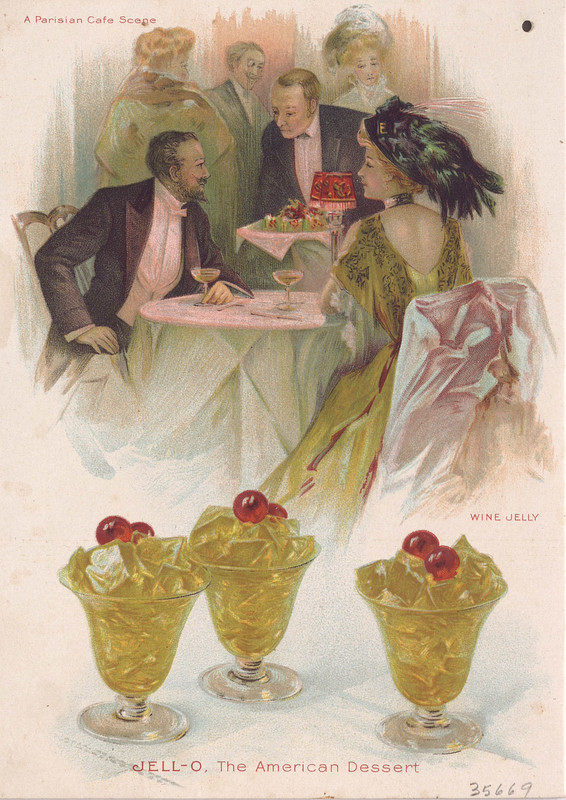 Desserts of the World - A Parisian Cafe Scene

Imagining the Other II

If Desserts of the World (1909) imagined what the world was eating (if it wasn’t eating Jell-O), and Jell-O America’s Most Famous Dessert: A Home Everywhere (1922) imagined Jell-O being consumed by all kinds of Americans, Jell-O America’s Most Famous Dessert (1926) imagined the rest of the world eating Jell-O. In An Oriental Group a Buddha figure presides over an elaborate Neapolitan Jell-O, accompanied by fruits, cakes, a silver spoon, and an empty vase, and framed by pink silk below and brocaded green silk above. This Orient is ornamental and constructed of fabric and objets d’art, not gustatory. The suggested ‘Company Luncheon’ menu ranges from Potatoes with Hollandaise to Bonbons, and includes no Asian ingredients or flavors.

In Jell-O Paradise Pudding - A La Francaise the menu for an “Inexpensive Club Luncheon,” includes meatloaf, succotash, and hot biscuits. Service à la Française refers to many dishes being served simultaneously on the dining table, in contrast to Service à la Russe, where multiple individual courses are plated for the diner in sequence. The Paradise Pudding anchors this image, framed by the commonplace objects typical of the still-life style: a coffee pot, a portrait, fabric and an empty vase. As with An Oriental Group (above), the still-life format surrounds Jell-O with a patina of age and of European status. Paradise Pudding is a mixture of creamed Lemon Jell-O thickened with marshmallows, almonds, maraschino cherries, and crushed macaroons. 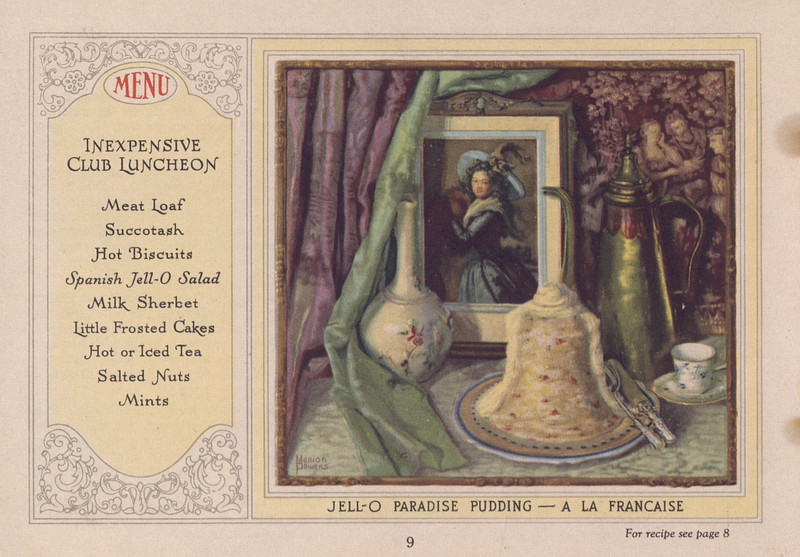 In Lemon Jell-O - A Scandinavian Motif the menu for afternoon tea - cream puffs, candied peel, and assorted sandwiches - harmonizes with the illustration of ice cookies, fruit and a molded lemon Jell-O. Behind this scene is a portrait of two men participating in Military Patrol, a shooting and skiing antecedent of the Biathlon, which had just recently been showcased in the 1924 Winter Olympics. While held in France, the games were dominated by Norway and Finland, realistically connecting the Military Patrol to the titular Scandinavian Motif. Guns and Jell-O appear to be comfortable companions in this setting

For a Prohibition-Era advertising campaign, the most striking feature of Jell-O Plum Pudding - An English Service is the two decanters of liquid, presumably for drinking, as indicated by the two glasses adjacent. Traditional English plum pudding is set alight with brandy, which is probably a bad idea when your plum pudding is Lemon Jell-O enriched with spiced fruits and nuts.  The Englishness of this setting is further emphasized by the food (walnuts, dried muscatels), the art (horses and carriages, more horses) and that quintessential English objet d’art: a Toby Jug. The dinner menu is a suitably English roast chicken and asparagus on toast, suggesting perhaps, that the producers of this advertising were much more familiar with English culture than with others.

While events in Spain edged slowly towards the Spanish Civil War, the symbolic elements of A Spanish Ensemble are royal, in both aesthetics and in the courtly figure in a large portrait. Recalling Diego Velazquez's 1656 Las Meninas (The Maids of Honor) it perhaps also references the contemporary royals, Victoria Eugenie of Battenberg, the wife of King Alfonso XIII. At the time of publication (1926), the King of Spain still supported dictator Miguel Primo de Rivera, and the royal family would not flee the country until the establishment of the doomed Second Spanish Republic in 1931. Ornate decorations, including a fan, frame the large Strawberry Jell-O capped with cream. As the back cover of America’s Most Famous Dessert, this image is edged by butlers in livery standing to attention, sentinels of large domed serving vessels, presumably with particularly elaborate unmolded Jell-O desserts hidden inside. 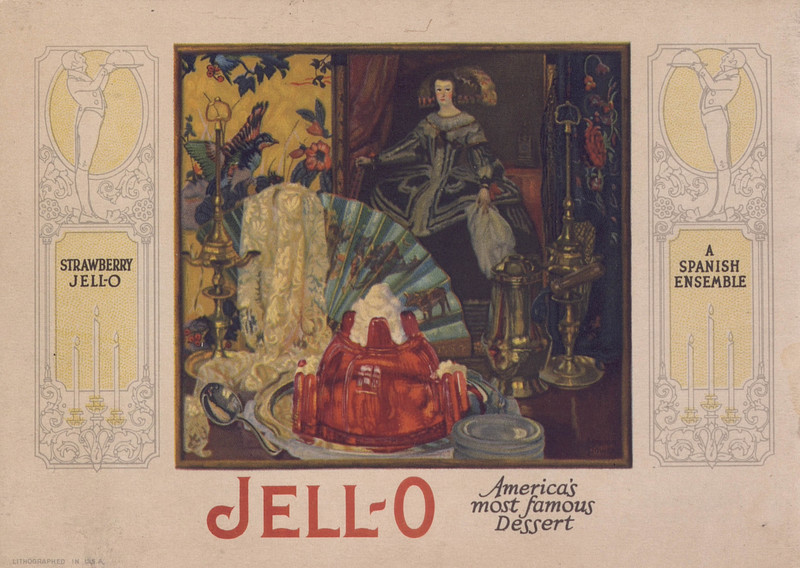 Imagining the Other at Home Overview