“Costume,” which shares the same root as “custom,” signals the traditional or “customary” clothing of a place or time. Unlike fashion plates, which offer examples of the types of clothes one wore to stay up-to-date with the trends of the moment, illustrations of costumes portray the diversity of past customs and national dress. Ideas of trend and costumes go hand in hand, however: precisely because there is a contemporaneity to fashion, costumes can be historicized. Fashion trends expire once the clothes become labeled as costumes. This tension indicates a new understanding of history as relative and as something different than the present.

Depictions of historical costumes in costume books were designed to keep a record of the clothing of the past, or at least an evocation of the past as many of the artists took creative license. Illustrated surveys of historic costume blossomed in the late eighteenth century and reached a peak by the mid-to-late nineteenth century. Some costume books, such as the two volumes from the series of Costumes Historiques de la France, serve to educate readers about the clothing worn at different historical moments. Other costume books record the interest in dressing up in costumes inspired by historical clothing. Such is the case in the Quadrille de Marie Stuart and the Costume of the Representatives. In both of these illustrated books, the designs are modern but are still meant to evoke earlier periods. [IG] 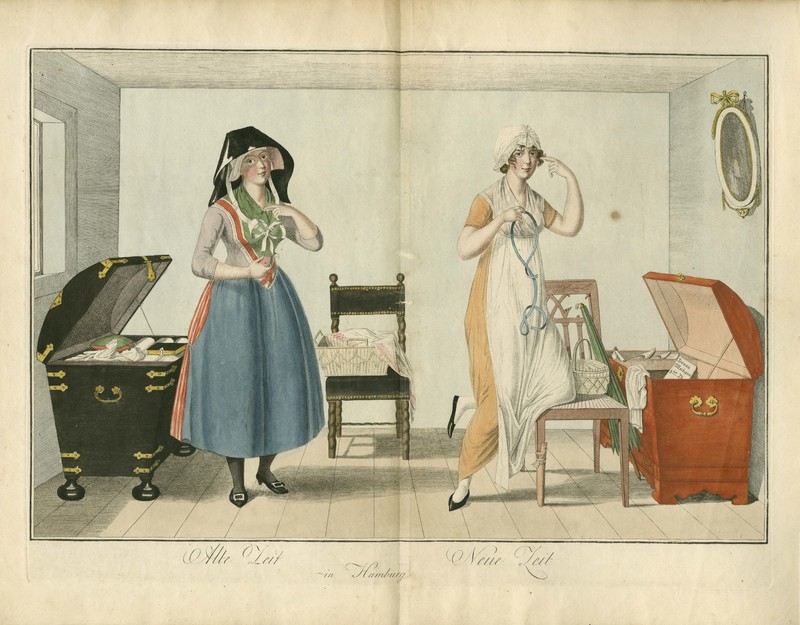 In the print “Alte Zeit, Neue Zeit in Hamburg" (Olden Times, Modern Times in Hamburg), two women occupy the space of a small room, each standing by an open trunk of clothing and accessories. The woman on the left wears traditional German regional costume, which includes an elaborate headdress. Her counterpart on the right is dressed in the modern Empire-waist dress and simple bonnet popular across Europe. While the fashionable woman points to her eyes, her counterpart gestures to her heart, suggesting that costume reflects a deeper and truer sense of identity than do superficial fashions. [CW] 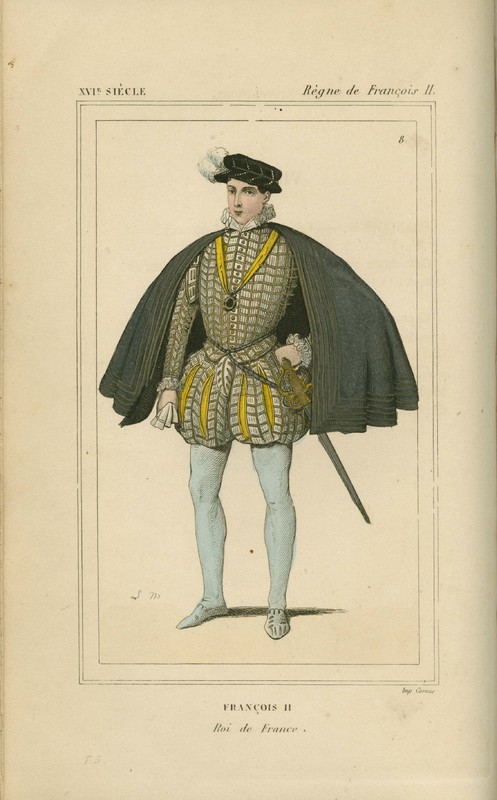 The two volumes of Costumes Historiques de la France (Historical Costumes of France) in this exhibit are part of a collection of ten volumes on the topic of historical costumes covering a remarkable range of years starting in the first century CE and ending in 1839. Through the plates, the reader encounters an encyclopedic and systematized record of costume through the ages. The models represented are sometimes generically referred to as a peasant or a bourgeois(e), signaling an interest in portraying the clothes worn by a type rather than a specific individual. In other instances, such as the opening displayed here, the plates depict portraits of specific historical characters.

Often, the same historical figure is represented at different phases of their lives: Francis II (1544–1560) is seen at four different ages. One can imagine the series offering a useful reference for designing a costume from a certain epoch. The book also provides biographical or socio-historical information, which signals an interest in going beyond depicting the customary clothing of a time period, especially since the textual descriptions of the clothes themselves are comparatively minimal. Essays titled “Observation” are interspersed between costume plates, and cover topics like calendar reforms alongside specialized fashion-related topics such as corsets. [IG] 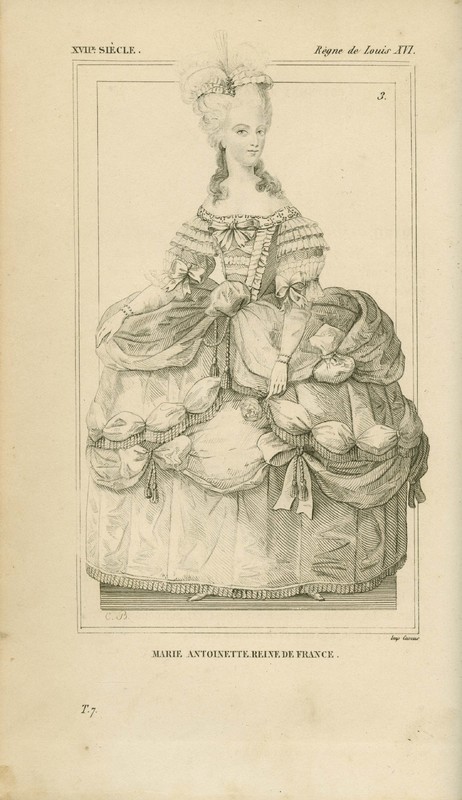 In another volume of Costumes Historiques de la France (Historical Costumes of France), Marie-Antoinette (1755–1793) is featured wearing a voluminous court dress, alongside a short biography. Although the text is brief and mostly factually historical, it points to how, upon becoming queen, she engaged in pleasurable whims and later became the object of popular hatred. The author seems to strike a balance between information and narrativization of the character’s legacy in popular opinion. In the paragraph below, however, the taxonomic and detached description of her dress contrasts with the biographical account in its tone as well as its use of the present tense. The outfit’s description seems only to provide clarification on fabrics or details that may not have been distinguishable from the plate itself. As a result, the author suggests a tension between Marie-Antoinette as a historical figure of importance and as a mannequin for the fashions of her time. [IG] 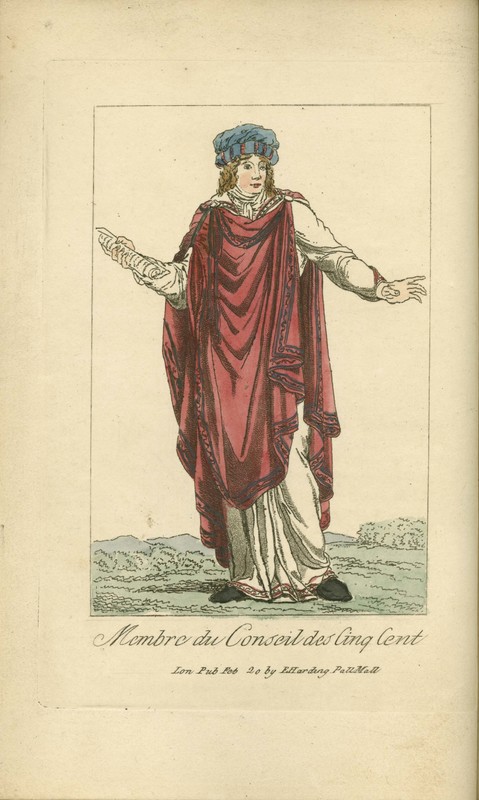 Dresses of the Representatives of the People acted as a detailed guide to official dress as well as a means of impressing the public favorably concerning their newly elected representatives. The plates depict the official dress of members of a new administration during France’s First Republic (1792–1804) while the text describes their roles. The English edition presented here was based on the original bilingual French/German text. The multiple translations indicate the book’s broader appeal beyond the French public, even though its contents promoted the nascent French government.

In the aftermath of the French Revolution, the newly established government sought ways to distinguish their dress from previous administrations and looked to the past, especially Greco-Roman politics, as a model. Most of the costumes in this book, including this outfit reminiscent of Greek orators worn by the "Membre du Conseil des Cinq Cent," were inspired by some form of historical dress either from Antiquity or the Renaissance. The author, Grasset de Saint-Sauveur (1757–1810), conceived of the costumes as a sartorial indication of the officials’ duties whereby the clothing signals the wearer’s function and status. The ambitious refashioning of government officials, however, failed to translate internationally: English caricaturists parodied the designs and judged them to be absurdly theatrical. [IG] 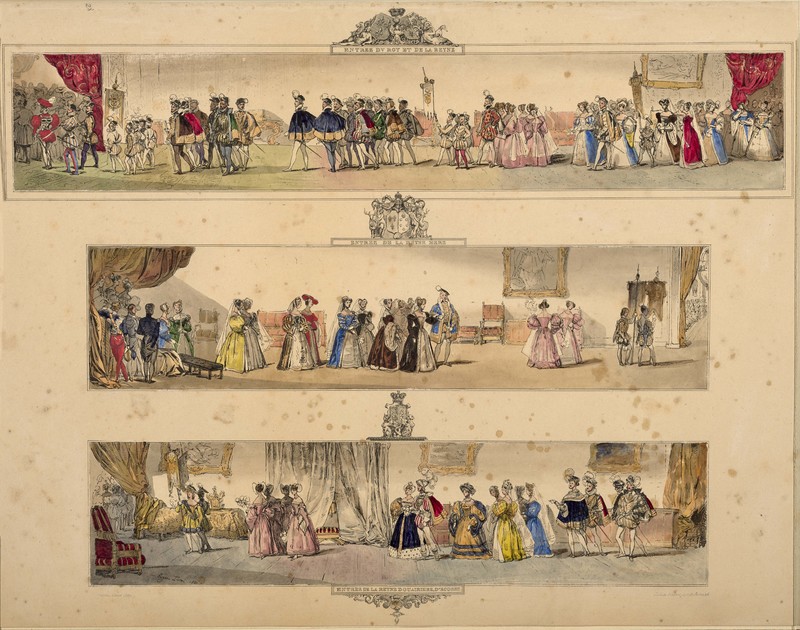 Three horizontal friezes in Quadrille de Marie Stuart depict individuals and small groups during a costumed ball. Although most are wearing historical outfits, a handful of the small figures with their backs to us situate the scene in the late 1820s. The artist, Eugène Lami (1800–1890), uses pre-cinematographic techniques, almost like a storyboard, to show as many of the costumes as possible. This elaborate album commemorates a costumed ball with the theme of “Mary Stuart” hosted by the Duchesse de Berry (1798–1870), the daughter-in-law to then-king Charles X (1757–1836). The ball’s theme aligned with an interest among the royal court in dressing up in historical costumes, often conflating the medieval and renaissance periods. The theme further demonstrates the appeal in France of Scottish history, especially figures such as Mary, Queen of Scots, also known as Mary Stuart.

The Duchess played the role of Mary Stuart herself and can be spotted on the right-hand side of the topmost register, wearing a blue and white gown. The rest of the figures comprise the handful of guests who had been invited to impersonate historical characters from the time of Mary Stuart (1542–1587). Stuart was also briefly queen of France, when married to Francis II (1544–1560). The connection between Mary, Queen of Scots and France turns this album into a particularly subtle object of political manipulation at a time when the French monarchy was unraveling, and the Duchess perhaps was trying to secure her position by impersonating a previous queen. [IG]