Costume books were not confined to historical dress; they increasingly referred to regional clothing that differed from the cosmopolitan norms of London and Paris. The interest in non-cosmopolitan costumes often resided in capturing the vestiges of regional traditions for the enjoyment of urban armchair travelers. In some instances, such as the Costumes of Great Britain and the Costumes of French Pyrennées, long passages of text not only provide context for the images, but they also function to legitimize and enhance the picturesque atmosphere. The descriptions, however, often carry with them a sense of normative artificiality catering to expectations a tourist might have when traveling to those regions. In other words, the costumes in the regional costume books were not necessarily the everyday dress of everyday people. The discrepancy between the reality of the people’s dress and their depictions in published costume books sold in the urban centers reveals an interest in freezing traditions during a period of rapid changes in urban environments, where residents of expanding and industrializing cities looked to provincial life were in search of their own identity for a sense of stability. [IG] 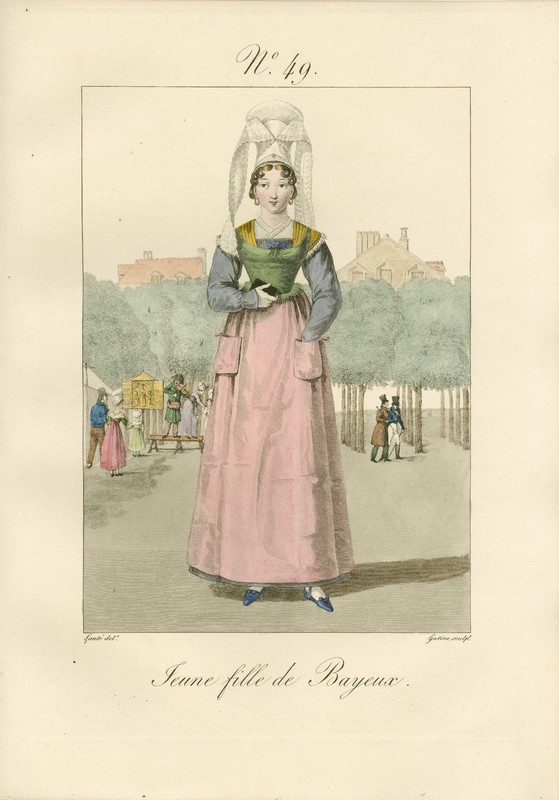 This plate from Cent Cinq Costumes des Départements de la Seine Inférieure, du Calvados, de la Manche et de l’Orne (Five Hundred Costumes from the Departments of the lower Seine, Calvados, Manche, and Orne) depicts a young lady from the town of Bayeux in France’s northwest Normandy region. Not only is the figure’s location specified, but the regional specificity of her costume is also emphasized in contrast to the clothes worn by the two men on her right. As urban centers such as Paris expanded dramatically, inhabitants from these centers also sought a clear identity. Highlighting the “modern” city’s distinctiveness with regional identities was one way of doing so. Although most regions in France had strong roots and inherited regional identities, these regional markers are here overdetermined, cast as bastions of tradition in opposition to ever-changing city life. The marionnettiste (puppeteer) performing in the street to the figure’s left, for instance, was associated with declining traditions of popular entertainment. For an urban reader, flipping through the pages of this book would have provided a form of surrogate travel through time and space. [IG] 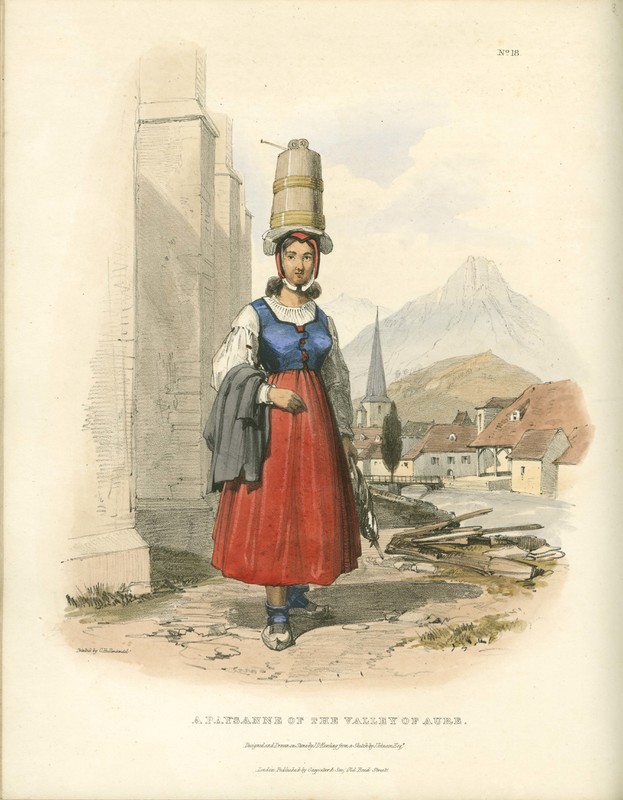 “A Paysanne of the Valley of Aure,” Costumes of the French Pyrenees: drawn on stone by J.D. Harding; from original sketches by J. Johnson. Hand-colored lithograph. London: Published by James Carpenter & Son, 1832. On loan from the private collection of James Ravin.

Costumes of the French Pyrenees is the result of the collaboration between an artist who drew the sketches, Johnson, and a lithographer, Harding, who translated the drawings onto stone to be printed. It focuses on the region of the Pyrenées, the mountain range that forms the natural border between France and Spain, and provides a typical armchair-traveler experience for an English audience to whom the southernmost borders of France might have seemed exotic.

This experience, however, is intentionally curated. Every plate has its own adjacent two-page commentary. The opening paragraph for this plate offers an interesting justification for the traditional cachet the woman’s dress has maintained. The geographical remoteness, according to the author, explains the absence of change in ways of dressing. The author makes negative judgments throughout; for example, he attributes the lack of tourists in the region to a dearth of mineral waters. It is worth considering how the author’s personal opinions affect the reading experience and how the author’s voice transports the reader further into the region. Almost like a written voice-over, this literary device functions to frame his approach as documentary. The book’s introduction states that the author wishes to prevent these costumes from falling into oblivion and deems it necessary to give a “topographical notice” of the region, its dress, and its customs. The direct address to the reader serves to discourage any form of suspicion or doubt regarding the accuracy of the depictions and descriptions. [IG] 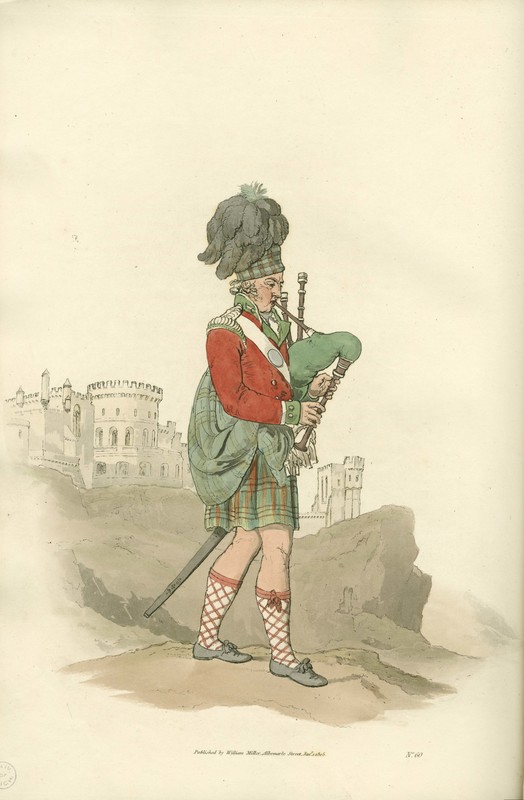 The Costumes of Great Britain was published during a time of intense francophobia driven by fear of an invasion by Napoleon, which increased fervent British patriotism. The illustrator, William Henry Pyne (1769–1824), described himself as a social geographer. This book is part of a series of costume books on Turkey, China, Russia, Austria, Spain and more. Through his illustrations, he documented a growing interest in the national and regional dress of various places in Europe, such as Spain, Austria, and Russia, and elsewhere, such as Turkey and China. The book also articulates the overlap between costumes and customs: how do regional outfits come to stand in for the traditions of that location? The first sentences of the text describing the “Highland Piper,” for instance, emphasize how little Scottish military dress has changed, contrasting it with uniforms from other regions of the British isles and other countries. Pyne suggests that the customs and costumes of Scotland are unchanging or, at the very least, that they evolve at a much slower pace than the rapidly shifting fashion trends of urban centers. [IG] 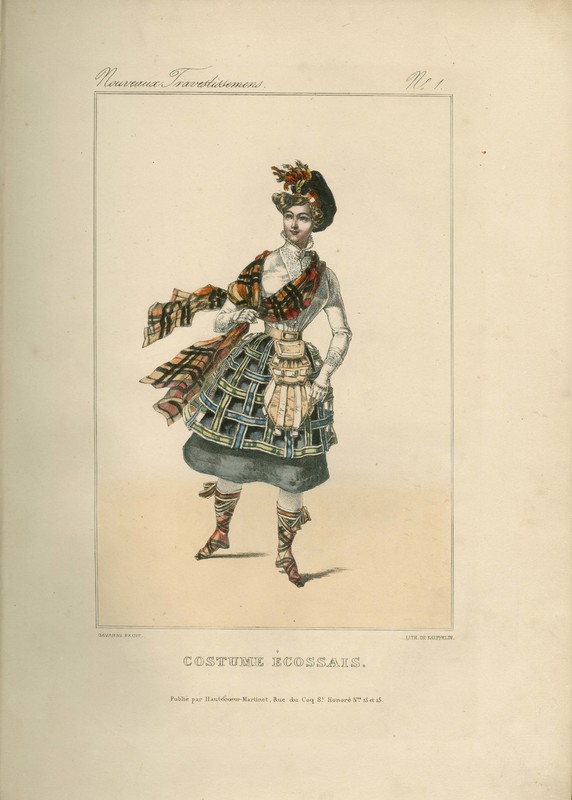 The Costume écossais (Scottish costume) demonstrates the interest at the time in Scottish dress as well as the perennial cultural exchanges between the United Kingdom and France. Scottish influences on fashion can be found in plates not on display from several books in this exhibition (Incroyables et Merveilleuses, Le Journal des dames et des modes). Tartan fabrics were as popular in France as translations of Walter Scott (1771–1832) novels. The references that we witness in this masquerade costume are as much about signaling references to Scottish elements as they are about responding to these broader cultural trends. This plate, not quite fashion and not quite costume, stands as a hybrid form, shifting the definitions of each. The caricaturist and illustrator Gavarni (1804–1866) intervened in the world of fashion prints as a rule breaker. His creations were not specialized enough to illustrate regional costume and were too inarticulate to be used for a seamstress. [IG]