From the 1870s to the 1890s the University of Michigan campus underwent exceptional growth, far surpassing the anticipated needs of the university prior to the Civil War. Enrollment rose rapidly following the war and the university quickly outgrew the confines of the 1840 plan, growing from a small liberal arts college into a large Victorian Campus. Space was needed for growth, but the university was expanding so quickly there wasn’t time to build new facilities. Instead, existing buildings were co-opted and converted for academic use, including three of the original four professors’ houses (Mayer, 61). The only building constructed during the 1870s was the new University Hall, which was built in 1872. University Hall, in conjunction with the Law Building, later renamed Haven Hall, and South College, established the strong State Street row proposed by Alexander Jackson Davis in his original plan for campus. The latter half of the 1870s was a period of mainly remodeling and repurposing facilities on campus. 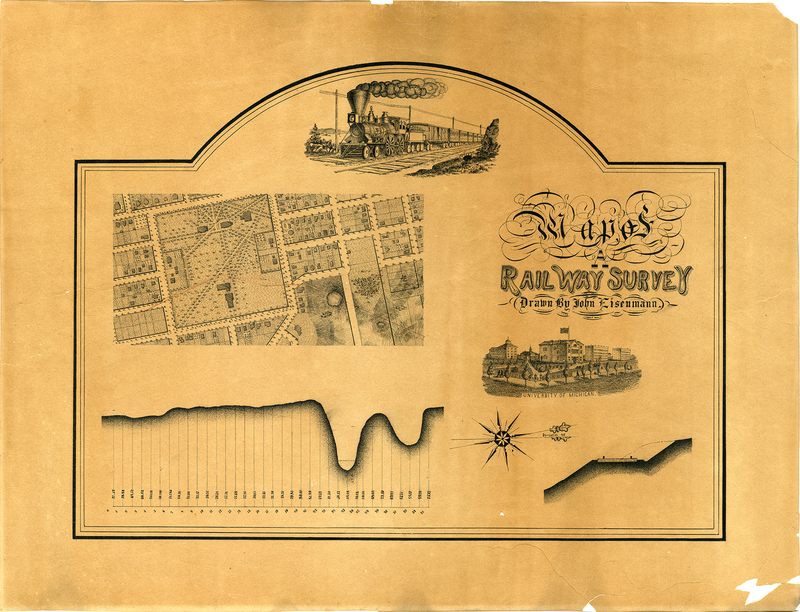 The inset illustration on the map depicts campus as it appeared in 1871, as well as a view of campus from the northeast. 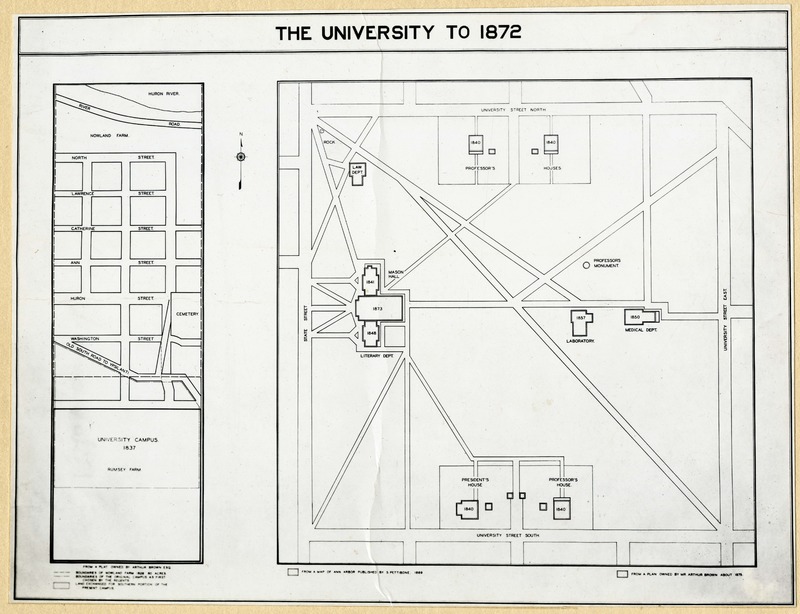 This map shows campus as it appears in 1872, when the 1840 plan continued to guide the growth of the university. The map on the left shows the location of the Rumsey and Nowland farms, portions of which became the site for campus.

Unlike the recycling of the previous decade, the 1880s were a period of new construction and rapid expansion on campus. It was during this decade, as well, that the 1840 plan’s influence on campus growth officially ended. Emphasis shifted away from the State Street row, instead focusing inward towards the Diag and the academic heart of campus, the new General Library (1883). During this time additional architectural styles were added to campus, further disrupting the visual cohesion and plan of campus. During the 1880s seven of the buildings added to campus were built in the Romanesque Revival style, including the University Museum (1880), the General Library (1883), West Physics (1889) and Tappan Hall (1894).  Whereas, as recently as the previous decade, the Carpenter Gothic style had been utilized in the construction of the Pavillion Hospital (1876) and the College of Dental Surgery (1879) (Mayer, 61).

University Hall was sited according to the 1840 plan, but was not built until 1872. Together with Mason Hall and South College, University Hall fortified the State Street row, a concept later abandoned by the university in the coming decades.

One factor that had profound impact on the development of campus throughout the latter half of the nineteenth century was the appointment of James Burrill Angell as president in 1871. President Angell did not believe in the visual importance of campus or the “bricks and mortar” of a university. Instead, he believed that more emphasis should be placed on enriching the school through its professors and academic leadership. As such, the role of campus planning fell to others during his tenure (Mayer, 60). 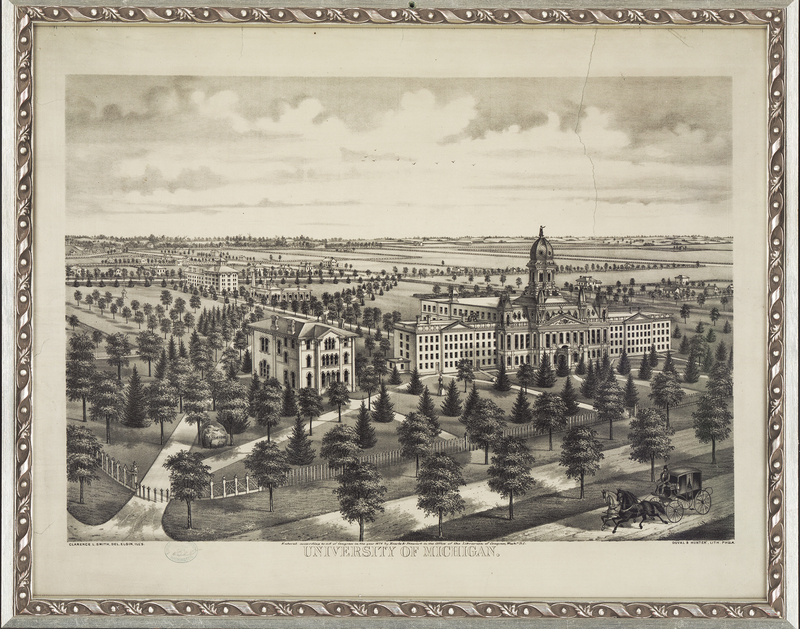 This 1874 view of campus from the northwest features Law Building, later renamed Haven Hall, and University Hall, built in 1872, in the foreground.

A glimpse of the State Street row at the turn of the century. The iconic row was proposed by Alexander Jackson Davis in his original campus plan for the univeristy and it would not come to complete fruition until 1872 with the addition of University Hall.