If a manufacturer were to offer colored slides, there were a few different ways to achieve this. Sometimes slides were tinted by applying even washes of one tone to the entire plate and colors could be altered in the developing process. Alternatively, one could add colors to a black and white image. This coloring process allowed for more detail and control in the application of color. McKnight used this method, employing colorists to colorize her slides.

Plates could be colored with water colors or oils, although the latter presented more challenges in getting the colors to be transparent enough for light to pass through when the slide was projected. Therefore, a thinning agent such as varnish or turpentine was often mixed into the colors. The limitations posed by the need for transparency also affected the range of colors that could be used. Ones that were typically recommended included crimson, indigo, Prussian blue, Italian pink, burnt sienna, rose madder, purple madder, raw sienna, and ivory black. The slides McKnight had colored from her travels to Hawaii are particularly bright and bold. They suggest that she was keen on making use of some of the best colors available. 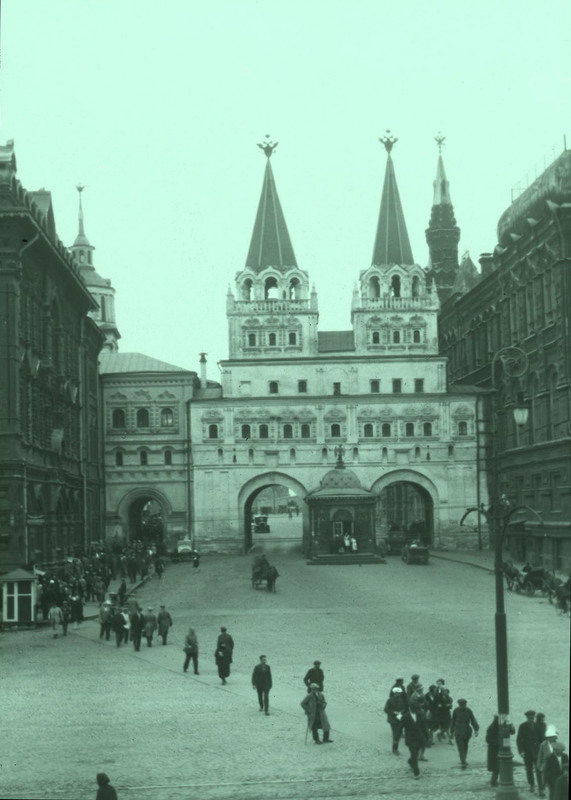 An example of a tinted slide in McKnight's collection.

Slide plates usually had one side that was smoother than the other, and this was the side that would be colored. The plate was prepared by washing it with a weak solution of water and ammonia. Requiring a steady hand, colorists often worked off a kind of table-top easel with a wooden frame around clear glass to rest the slide on. The frame sat up at an angle with a plain sheet of paper on the table below so that the colorist could clearly see how the colors would appear. It was important for the colorist to keep the inks moist while working, and this was most easily achieved by periodically breathing gently over the slide as it was colored. To finish, a layer of varnish was swept over the plate to preserve the work. 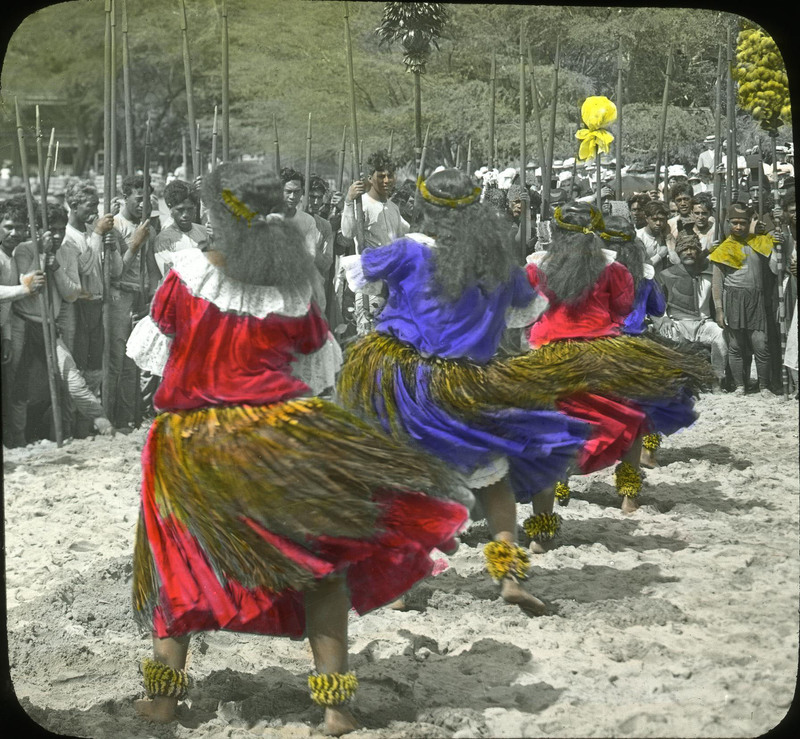 Not all slides were the most suitable for coloring. Typically, ones with plenty of clear detail and weak shadows (so the color could more easily show through) were the best choices. McKnight was clearly aware of the importance of carefully selecting which of her slides would be colored. In a letter concerning the creation of some slides for a lecture featuring the Library of Congress, she lists specific colors for various plates. She also stipulates that only the best slides be selected for coloring, stating "it is quality and not quantity that I want in this lecture" (original emphasis). McKnight was invested in having her collection be as fine and accurate as possible.

Diagram of an easel for coloring slides.

Of course it was not possible for the colors to match the original exactly. Sometimes, the colors of the plate would differ remarkably, even between slides of the same work (see the two versions of Sargent's Carnation, Lily, Lily, Rose below). Perhaps the colorist was experimenting with the inks available to them to see which ones would produce the best results. Or maybe they were testing the limits of their own artistic influence. Regardless, the colored portion of McKnight's collection was especially important for her lectures on works of art. She considered these reproductions, no matter how they were colored, as being essential to the proper study of the work. For example, notice below the difference in clarity between the black and white and the colored images of Whistler's Symphony in White #2: The Little White Girl. 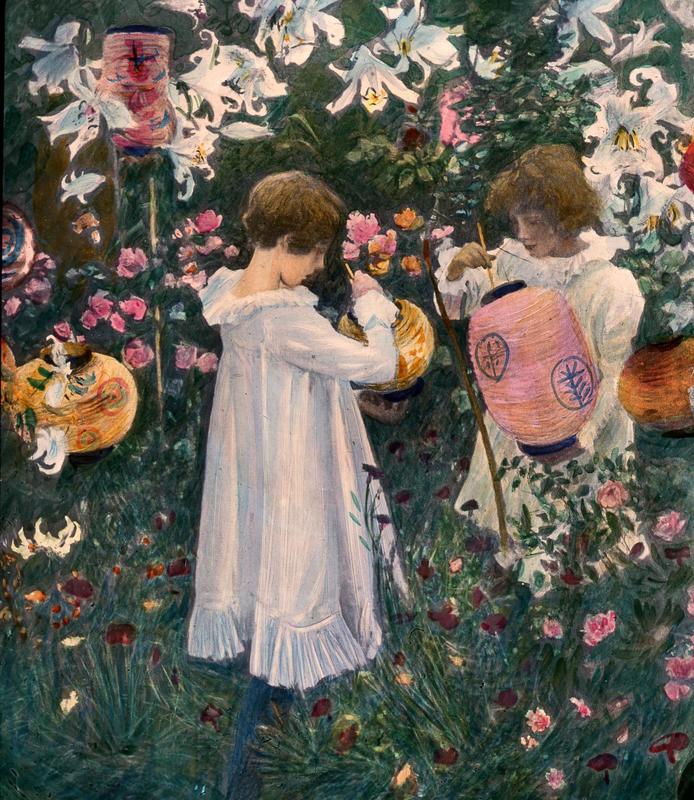 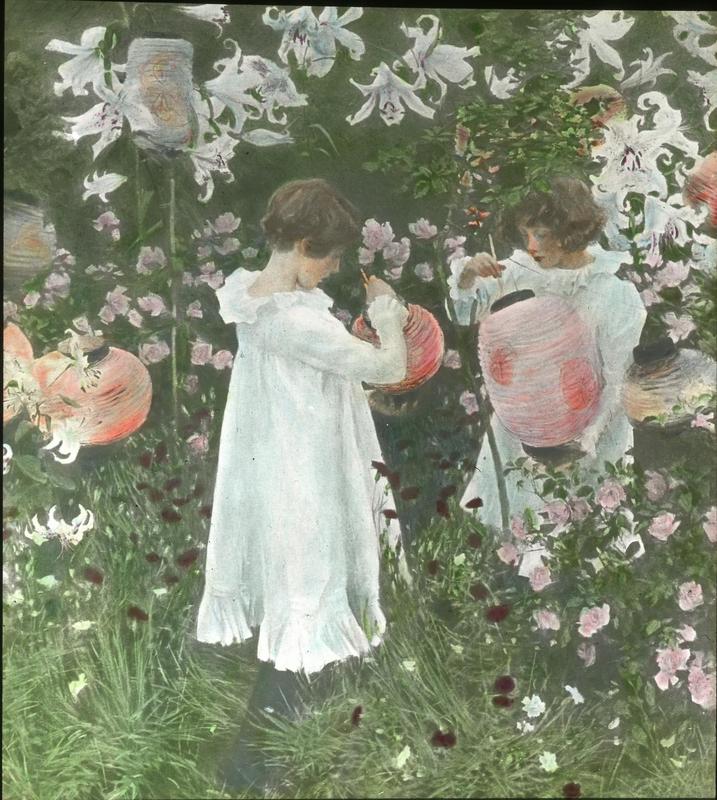 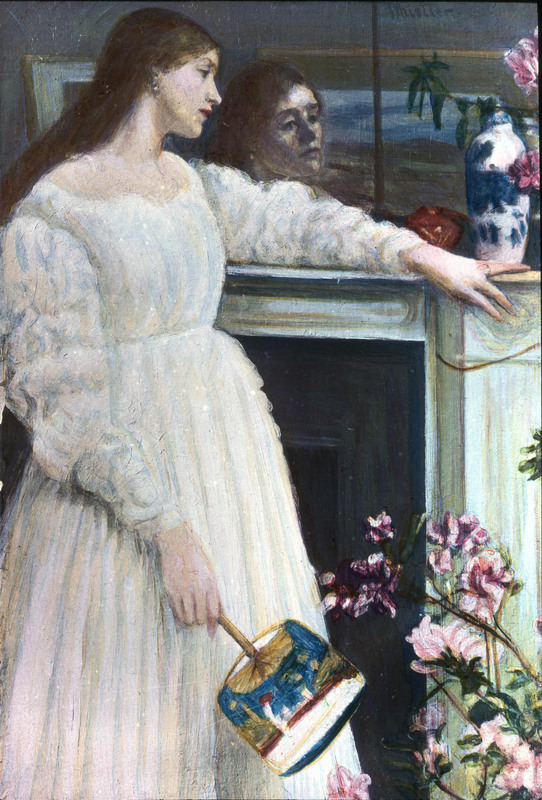 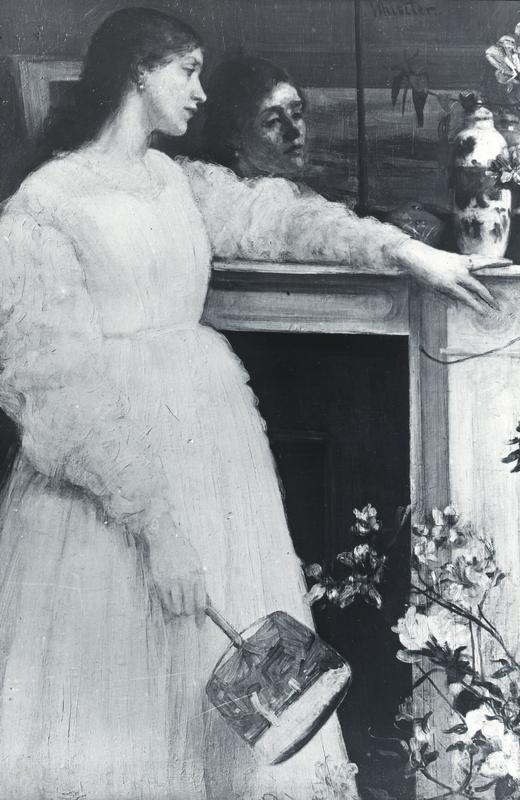 Symphony in White #2 (black and white)