The Russian Empire’s approach to the Greek War of Independence was, in a word, complicated. Russia had long been hostile to the Ottoman Empire, and their support of smaller revolts - some Greek, some among other Balkan communities - in Ottoman territory only exacerbated tensions between the two powers during the 18th and 19th centuries. Russia had also been a haven for Greeks looking to live under an Orthodox Christian ruler, and by the early 19th century, many Greeks had become involved in the Russian economic and social spheres. Thus, before the War of Independence, the Greek revolutionary group Filikí Etería (Greek: Φιλική Εταιρεία) assumed that the tsar and his forces would back their cause. However, diplomatic and ideological issues regarding the European balance of power and the preservation of peace on the continent following the fall of Napoleon I made the support of revolutionary activity of any kind controversial. This international political climate prevented the Russian government from taking any formal action despite the ties that bound the Greek and Russian communities together.

The historically friendly Greco-Russian relations were primarily borne from their shared religion: Orthodox Christianity, the faith of the Byzantines. Many Greeks and members of the Russian nobility alike held onto the legacy of Byzantium, and some saw a Greek revolution as an opportunity to reestablish a Greek-ruled Byzantine empire under the patronage of Russia and thus extend Russian commercial influence in the Eastern Mediterranean region.

Additionally, in the decades before the Greek War of Independence, Russia had acted as an advocate for the rights of Orthodox Christians living under Ottoman rule, even personally enshrining protections for them in the Russo-Turkish Treaty of Kuchuk-Kainardji (Turkish: Küçük Kaynarca Antlaşması; Russian: Кючук-Кайнарджийский мир) in 1774. Under Tsar Alexander I (Russian: Александр Павлович Романов), the Russian Empire had also helped to establish an independent - albeit short-lived - republic located in the Ionian Islands (Greek: Ιόνια νησιά) off the west coast of the Greek mainland. But, despite the history of Orthodox solidarity, it would take some time before the Russian government committed to helping the Greek revolutionaries. 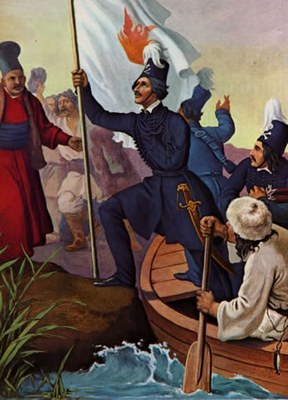 This painting by Peter von Hess shows Alexandros Ypsilantis (Greek: Αλέξανδρος Υψηλάντης), a Greek officer in the tsar’s army, crossing the river Pruth with his men to enter the Ottomans’ Danubian Principalities in February 1821. He is depicted wearing the all-black dress of his revolutionary army, the Sacred Band (Greek: Ἱερὸς Λόχος), and carrying the unit’s flag as he steps off of a canoe and onto the land.

The painting dramatizes the start to A. Ypsilantis’ revolt against the Ottomans, which - despite its failure - is commonly viewed as the start to the War of Independence. During his march into Moldavia and Wallachia, A. Ypsilantis was counting on Russia to give him support, but Alexander I not only refused to help him, but also condemned the revolt and discharged Ypsilantis from his army; despite Russia’s past actions in favor of the Greeks, the tsar now saw their actions as too much of a threat to a legitimate ruler, the sultan. 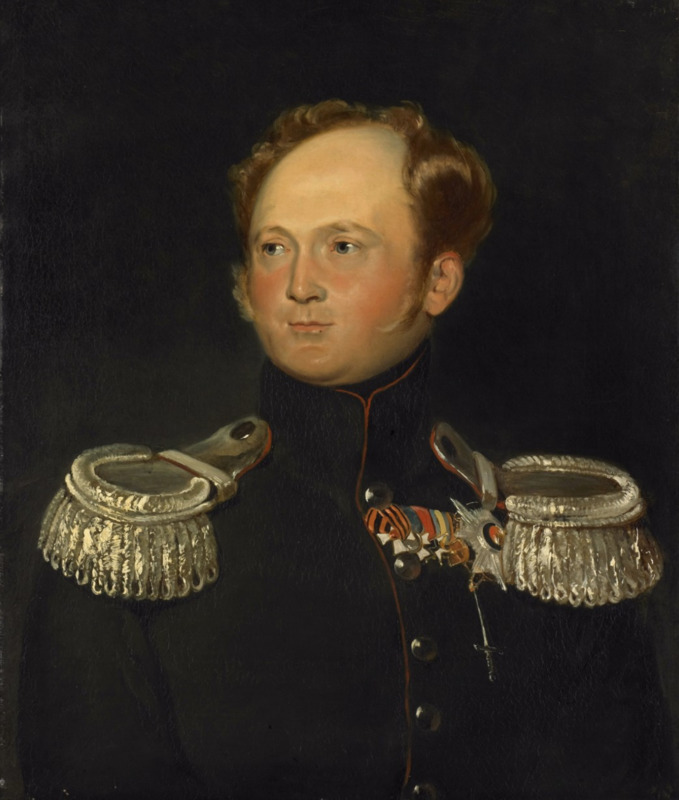 The above portrait depicts Tsar Alexander I, the ruler of the Russia Empire from 1801 until his death in 1825. He is shown to be a white man with dark blond hair, sideburns, and a receded hairline. He is wearing a military officer’s coat with various medals and large, silver epaulettes.

As the Enlightenment and the French Revolution of the 1790s brought new ideas about constitutionalism and liberalism to the public consciousness in the early 19th century, many monarchs responded by becoming more adamant about holding onto their power. Tsar Alexander I was no exception. While he professed his support for liberal ideas at the Congress of Vienna in 1815, Alexander I remained primarily concerned with upholding legitimacy and defending monarchy in the face of the spreading revolutionary spirit. Thus, it wouldn’t be until after his death and the ascension of his brother, Nicholas I (Russian: Николай I Павлович), to the throne that the Russian government would start to intervene in favor of the Greeks.

However, while the tsar refused to aid the Greeks at the onset of the war, the Russian public supported the Greeks a great deal. There were many Greeks living in Russia in the early 1800s, and they held significant roles in the nobility, Alexander I’s army, and the economic sector. Russia also refused to extradite Greeks that had fled the Danubian Principalities, thus providing a safe haven for Phanariots (Greek: Φαναριώτες) or other Greeks looking to escape from the Ottoman Empire. Philhellenism - a Romantic movement that idealized ancient Greece as the pinnacle of European culture and civilization - was also popular in Russia, though it was notably more common for the Russians to associate Greek peoples with the Byzantine Empire and the fallen grandeur of Orthodox Christianity instead of the ancients, who were more popular in the rest of Europe.

Even though the tsar had banned Russians from going to fight in the war, many Russians of all social classes still aided the Greek cause, primarily by ransoming and re-settling Greeks captured by the Ottomans using donations gathered from grassroots campaigns or contributed by the nobility or imperial family. These efforts would help keep the Greek insurgents afloat during the years of the war before Russia, Britain, and France took more active, official roles in supporting the Greeks.