One of the firmest opponents to intervention in the Greek revolution was Austria, represented by foreign minister Klemens von Metternich. When the Greeks began to revolt in the Danubian Principalities, Metternich did his best to ensure that none of the Great Powers - France, Britain, Russia, Austria, and Prussia - would come to the aid of the revolutionaries out of fear that supporting them would in turn support revolutionary ideas in their own countries. This was despite the desire of many Greeks to establish a Greek monarchy rather than a liberal government. This fear had deep roots, as all of Europe’s monarchs had seen the violence of the French Revolution in the 1790s, and many worried about what would happen if liberal-minded thinking became as powerful in their own countries as it had in France. Napoleon I’s conquests during the early years of the century had not helped to assuage this fear, either, as French influence spread across the continent as a result of his years of expansion and conquest. 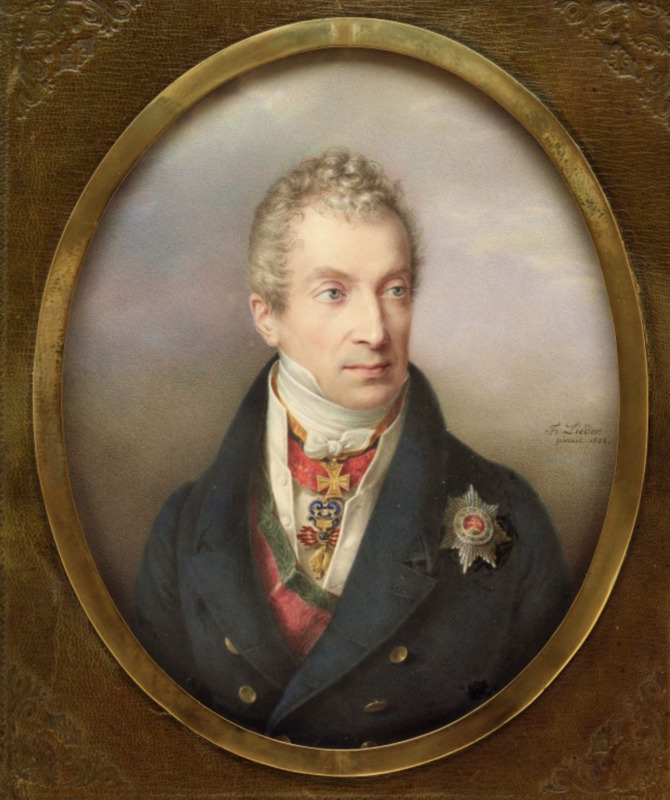 This image shows a miniature portrait of Klemens von Metternich, a German-Austrian who served as the Austrian foreign minister during the early and mid-19th century. A white man with a tuft of white hair, he is depicted wearing the insignia of the Order of the Golden Fleece - a Catholic chivalric order, represented by a large golden sheep pendant - as well as the badge and sash of the Order of Saint Stephen, an order of knighthood formerly presided over by the Habsburg monarchy.

Following Napoleon I’s defeat in 1815, each European power had a different idea about what would create a lasting peace on the continent, though many shared a concern about the rise in liberal, anti-monarchist ideology among the lower classes. Metternich personally believed that the only way in which Europe could maintain the balance of power was through the repression of any dissent that threatened legitimate monarchy, and this hardline approach to foreign policy and intervention had a significant negative impact on the Greek war effort at the outset of the war. 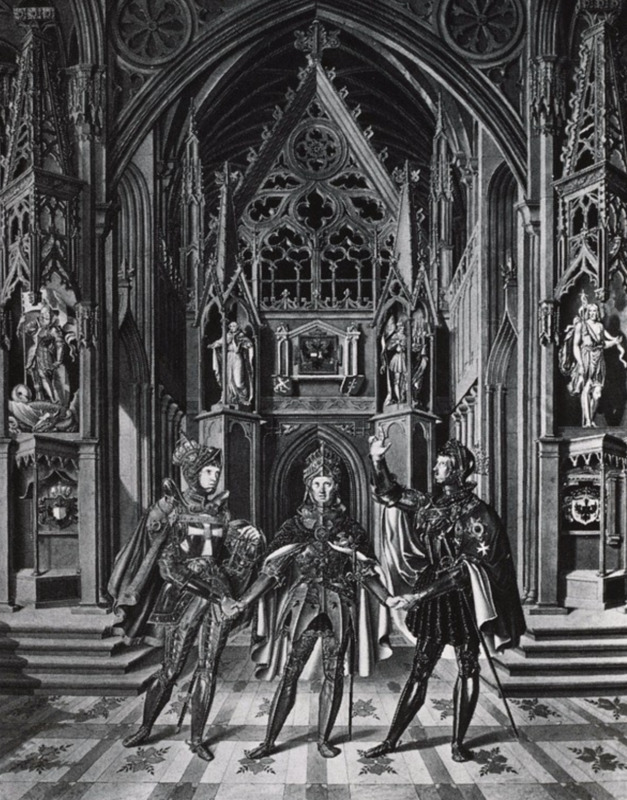 This black & white painting by Heinrich Olivier shows Prussia’s Frederick William III, Russia’s Alexander I, and Austria’s Francis II dressed as medieval knights and posing in an elaborate Gothic cathedral. The three stand at the center of the floor in open stances intended to show off their power, and behind them, statues of saints line the walls. The image, painted in 1815, is representative of the strong Christian leanings of the leadership in central and eastern Europe and the link between religion and nation during the early 19th century that led to the formation of the Holy Alliance.

The Holy Alliance, a tripartite coalition consisting of Austria, Prussia, and Russia, is often mentioned in connection to the later Quadruple and Quintuple Alliances, but a key difference is that it specifically aimed to uphold the importance of Christian rule and the divine right of kings as a means of achieving peace. By contrast, the later coalitions were more concerned with maintaining the balance of power through trade and Enlightenment ideology. While Tsar Alexander I was the one to bring forward the idea for the Holy Alliance, Metternich soon held a great deal of influence in the alliance as he continued to push his ideas about the necessity of taking counter-revolutionary action, no matter the context.

Thus, when the Greek Revolution began, Metternich stood firmly against it, and he convinced Prussia and Russia to do the same - even convincing Alexander I to follow his advice rather than take the more conciliatory, Greek-friendly approach suggested by the tsar’s own foreign minister, Ioannis Kapodistrias (Greek: Ἰωάννης Καποδίστριας). However, while the rebelling Greeks didn’t have a coherent plan for what kind of government they wanted in the result of victory, many leaned in favor of the establishment of a Greek monarchy. This only goes to show that Metternich cared deeply about upholding the already established European balance of power and preserving existing monarchies over supporting potential new ones, even if those newer kingdoms would hypothetically support Austria. Despite Metternich’s efforts, though, many European countries would eventually join the War of Independence on the side of the Greeks, disrupting his greater plans to maintain the power of European monarchies through suppression.