Many state governments did not involve themselves with the Greek revolution at first due to issues of power, influence, or lack of incentive. However, much of the general public in Europe and North America aligned themselves with the Greek cause as a result of the Philhellenic movement that was popular on the continents at the time. Even in countries that never officially provided aid, the public opinion was often pro-Greek enough to support the revolution through grassroots campaigns, the establishment of philhellenic committees, or - in some limited instances - the supply of volunteer fighters. In some cases such as France, this enthusiasm eventually led to government action; however, in countries that had no real stake in the matter, or were against the War of Independence, the extent of support for the revolution was entirely dictated by public interest.

Philhellenism was a branch of the Romantic movement which saw many Europeans and North Americans become fascinated with ancient Greek culture, which they viewed as the foundation of their contemporary society. Since the public had become so enamored with ancient Greece by the early 19th century, when the Greek War of Independence broke out, it was common for philhellenes to transpose their idealized view of the ancient Greeks onto the modern nation. People across Europe and the United States became adamant supporters of the Greek cause because they saw it as reminiscent of ancient conflicts like the Persian Wars, which had been fought between the classical-era Greeks and the Persian Empire, their neighbor to the east. However, some philhellenes became afflicted by what French archaeologist and writer Gaston Deschamps called “misohellenism,” or a distaste for modern Greece which he claimed arose from the “discrepancy between what one expected from Greece, and what Greece was in reality.” However, this mostly affected those who went to physically fight in the war, and since public support for the war came primarily in the form of monetary aid, the general public in many countries remained staunchly philhellenic.

One example of a nation whose public was more involved than the government is that of Sweden, which at the time encompassed the territory of both modern Sweden and Norway. For the most part, Sweden did not officially involve themselves in the Greek War of Independence, as they were formally attached to the anti-interventionist Holy Alliance. However, the Swedish public and press were enthusiastically supportive of the Greeks, and organizations like the Philhellenic society and the Grekvännernas sällskap (translated literally, “the Company of Greek Friends”), a group that provided monetary aid to the Greek revolutionaries, began to pop up in the country during the 1820s. However, it was significantly more popular to provide monetary aid rather than physical support: there were only about eight Swedes recorded as having gone to fight in Greece. The king of Sweden, Karl XIV Johan, allowed this pro-Greek activity to continue despite his affiliation with the Holy Alliance because of his distaste for Metternich’s anti-interventionist policy, which contradicted his own opinion that their nations should be able to intervene in revolutions that would benefit their commercial interests. Despite that disagreement, Sweden never officially became involved in the war.

As shown by Sweden, philhellenism did not as easily sway government officials as it did the public; however, in France, the public opinion was so adamantly in support of the Greeks that it led to government intervention during the latter stages of the war. At first, the French government was primarily concerned with upholding monarchy, just like Metternich. They had also historically been allies to the Ottoman Empire, and with the fall of Napoleon being so recent, the French wanted to reestablish their power on the continent by taking a hard stance on international politics. The threat of the expansion of Russian influence in the region also worried France, as they had played a powerful role in the Levant for centuries as a Catholic influence as well as a commercial partner and they feared losing that hold. 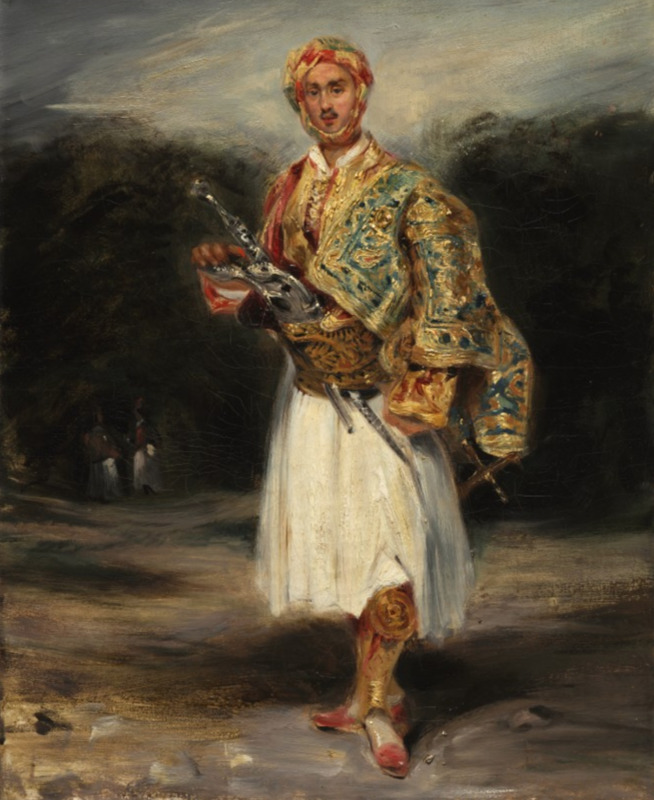 This painting shows Count Demetrius de Palatiano, a noble from Corfu, Greece, dressed in the colorful, finely embroidered garb of a Suliot. He stands in front of a forest, with two indistinct figures standing in the distance. The Suliots were Eastern Orthodox Christians from the Epirus region of what is now Greece, and while they were considered Greek by the Ottomans, they had Albanian roots and spoke a Souliotic dialect of Albanian in addition to Greek. An unknown artist created this work in imitation of the famous French painter Eugène Delacroix, whose evocative painting The Massacre at Chios sparked a great deal of philhellenic support for the Greeks in Northwestern Europe.

Eugène Delacroix and his contemporaries are just one example of how the French people, unlike their government, were very much caught up in philhellenic fervor. By the end of the 18th century, there was a great deal of French literature, architecture, and art inspired by ancient Greece, and travel guides to Greece and the Ottoman Empire were also popular. Many philhellenes ascribed to the movement for different reasons: some liked the artistic aspect, others the Romanticism, and still others used it as a vehicle for the promotion of liberal Republicanism because of ancient Greece’s democratic system. The French press was also heavily pro-Greek, and kept the public up to date with all that was happening during the War of Independence. This philhellenic enthusiasm put pressure on the French government to take a more active role in the revolution, and with the threat of Russian expansion lessened upon the ascension of Tsar Nicholas I in 1825, and the improvement of Russo-British relations, the French began to support the Greeks by the latter half of the decade. 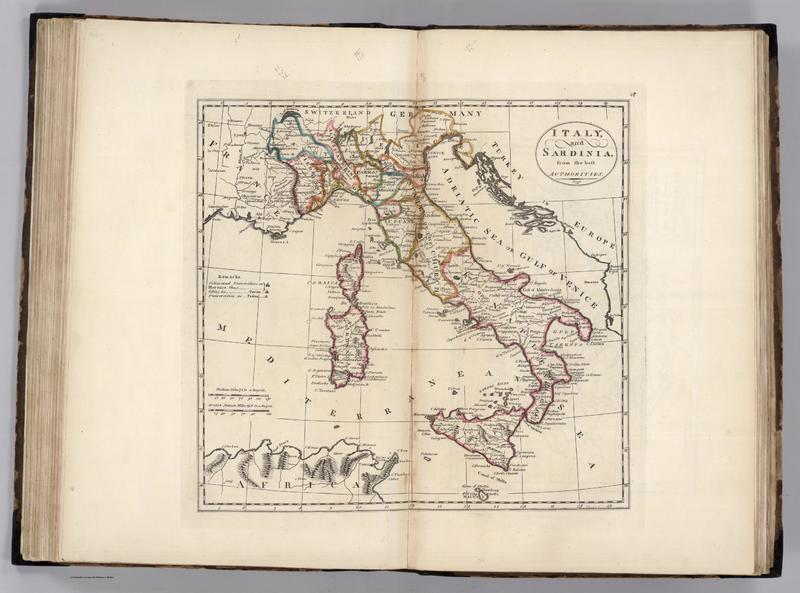 The above map shows Italy and Sardinia as it was in 1818. The peninsula is broken up into a number of different kingdoms, each delineated by differently colored borders. There are a great deal of smaller kingdoms in the north around the region of the Alps, showing how disunified the nation was during the time leading up to the Greek War of Independence.

Not all European nations were so tolerant of pro-Greek activity: in Italy, the various state governments were actually against philhellenism, as philhellenes often were involved with Italian nationalist circles. By 1821, Italy had not yet unified, and nationalists were spreading their political ideas across the region in the hopes of sparking a movement to form a single Italian state. However, most of the individual governments resisted this ideology, as it challenged the authority of their legitimist autocratic systems. The revolution in Greece only helped add fuel to the Italian nationalistic fire, though. Not only did philhellenism go hand-in-hand with the romanticization of Rome, but the revolution also sparked feelings of solidarity between the Italians and the Greeks, as many Italians saw the war as a fellow nation’s fight for independence and self-determination. Additionally, the War of Independence called to memory stories of legendary heroes and deeds, and the appreciation of these inspired many Italians to support the Greek cause against those who would harm them. Thus, much of the aid to the Greeks that came from Italy was politically motivated, and it came in the form of not only volunteers, but also philanthropy supported by Italian artists and workers.

From these examples, it’s clear that philhellenism had a far reach, and its influence on the European continent and beyond had a significant impact on the strength of the Greek side in the War of Independence. It is also worth mentioning that philhellenism existed outside of the European continent, but in much more isolated cases. Haiti in particular was very sympathetic towards the Greek cause, having just secured independence themselves, but they didn’t have the financial resources to provide aid in any substantial way during the war. They were, however, the first country to officially recognize the new Greek state established after the war ended, providing a fascinating example of how widespread philhellenism had become by the 1830s.