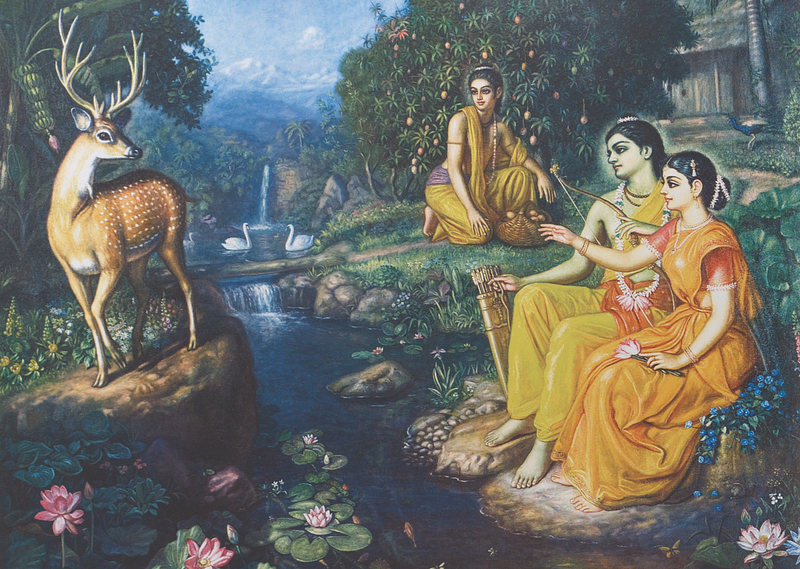 In this painting from the Hare Krishna movement, Sita gazes longingly at a golden deer while Lakshmana, her brother-in-law, sits apart. When Rama leaves to hunt the deer for his wife, the rakshasa Ravana kidnaps her.

How fortunate you should abandon your kinfolk, your pride and wealth, proud Sita, to follow Rama when he was banished to the forest. A woman who holds her husband dear—whether he is in the city or the forest, whether he is good or evil—gains worlds that bring great blessings.

Rama could ask for no better wife than Sita — beautiful, loyal, and pure. Sita’s wifely devotion is apparent in her every action, from boldly volunteering to join Rama in his forest exile to refusing to give herself to Ravana when she is imprisoned in Lanka.

As an avatar of the goddess Lakshmi, Sita is safe from the rakshasa king’s unwanted touch. However, this does not stop Ravana from attempting to seduce her. When Hanuman, one of Rama’s fiercest followers, comes to rescue her, she is clearly miserable, but refuses to go with him, citing her husband’s honor. Even in her greatest moment of pain, Sita realizes that Rama’s honor depends on rescuing his wife himself, and she is willing to spend more time in captivity for this.

Despite her clear demonstrations of fidelity, Sita’s purity comes under questioning after she is free from Rama’s lair, so she throws herself into a raging fire to prove her unyielding loyalty to her husband. She survives the trial, yet is later banished to fully assuage the suspicious people of Kosala. A pregnant Sita ends up in the hermitage of Valmiki, the all-knowing author of the Ramayana, where she bears twins.

These two sons eventually meet their father as adults, causing Rama to regret sending her away. Tragically, it is too late for the family to be reunited in Kosala. In a final demonstration of her goodness, Sita is swallowed up by the earth goddess. Rama is distraught at the loss of his wife, but the gods assure him that they will someday meet again. 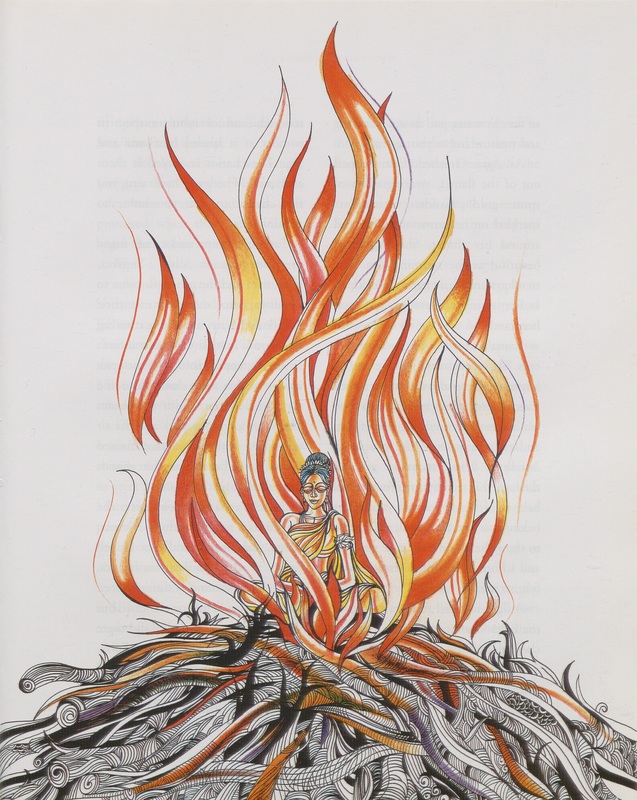 Despite the curling smoke and burning fire, Sita has a small smile and her eyes are closed peacefully, for she knows that she has been true to Rama. Her sari matches the colors of the flames, which seem to form a throne around her.

Malicious, wicked woman, bent on destroying this House! Evil woman, what evil did Rama or I ever do to you? [...] It was sheer suicide to bring you into my home. I did it unwittingly, thinking you a princess—and not a deadly poison viper.

While Sita is the perfect wife, other female characters are less honorable. Kaikeyi, King Dasaratha’s second wife, is a particularly effective foil. When her husband announces that Rama will ascend to the throne, Kaikeyi is initially joyous at her stepson’s success. However, her hunchbacked maidservant, Manthara, worries that, with Rama in power, Kaikeyi’s status – and thus hers — would be greatly diminished. Manthara slyly reminds Kaikeyi that years ago, the second queen saved Dasaratha’s life. In gratitude, he offered her two boons which she never redeemed.

Emboldened, Kaikeyi feigns a distraught state. When the king sees his second wife sobbing inconsolably, he promises to do anything to help her, not realizing the magnitude of her coming request. Seizing her opportunity, Kaikeyi demands that he crown her son, Bharata, instead. To ensure little resistance, she also orders Dasaratha to banish Rama for fourteen years. The aging monarch is horrified at her betrayal, but has no choice. With a heavy heart, he honors Kaikeyi’s boons, and Rama begins his fateful journey into the forest. 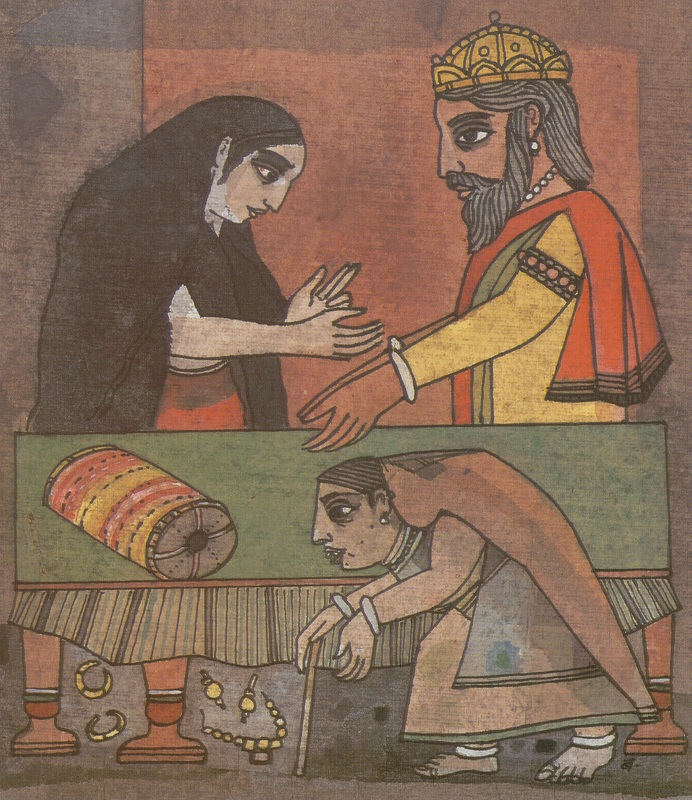 While Queen Kaikeyi dresses in dark, dirty clothing in an effort to wrongfully secure the throne for her son, the true mastermind of the plot creeps around the room. Hunchbacked Manthara chases after gold jewelry, symbolizing her desire for power and comfort.