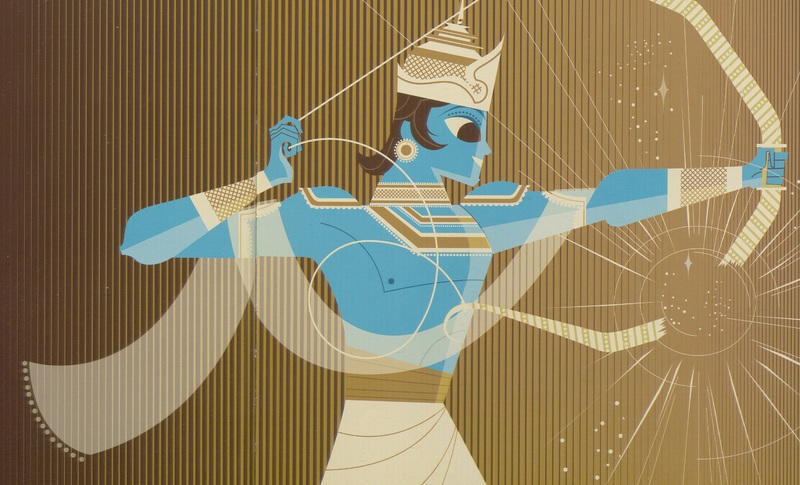 This modern, whimsical depiction of Rama breaking Shiva's bow was created by an Indian-American animator and storyboard artist for Pixar Animation Studios. The golden glow is a nod to Rama's divine connection.

All men know of him, for he is self-controlled, mighty, radiant, steadfast and masterful. He is wise and grounded in proper conduct. Eloquent and majestic, he annihilates his enemies.

As an avatar of Vishnu, Rama is destined to defeat the evil rakshasa king Ravana. The spark for their fateful battle is the kidnapping of Rama's wife, the beautiful Sita.

The couple’s relationship begins when Rama takes a spiritual journey through the forest with his younger brother, Lakshmana, and a sage. At a palace near the end of their trip, they encounter a king who announces he will give his daughter, Sita, up for marriage only if her suitor can string the bow of the god Siva. Drawn to both the challenge and the prize, Rama enters the challenge, and not only strings the bow, but is so strong that he breaks it.

The mightiest exhibit of Rama's strength comes when he fights Ravana in the climactic battle. Rama was a thoughtful leader, surrounding himself with a strong monkey army, but he was the only one who could finally defeat Ravana. After a dramatic chariot duel, Rama takes aim at the rakshasa with an arrow infused with a divine spell, and Ravana is finally taken down. Due to his incredible skill, the bow and arrow are frequently used symbols for Rama.

Rama's life serves as a lesson on the principle of dharma, essential in Hindu religion. Dharma refers to one's role in life; in Hindu tradition, this is defined by the caste, or social standing, set at birth. As a member of the Kshatriya caste, Rama's role is to be a warrior, which he does exceptionally well. By always remaining on the path, he succeeds in fulfilling his dharma. Had he chosen instead to be a sage, he would have not been fulfilling his dharma, no matter how good of a sage he was.

Fulfilling dharma allows people to rise up in the caste system in the next life and eventually achieve moksha — release from the cycle of rebirth. Thus, the Ramayana is not only an entertaining tale. For its most devoted readers, it is a serious guide for how to live. 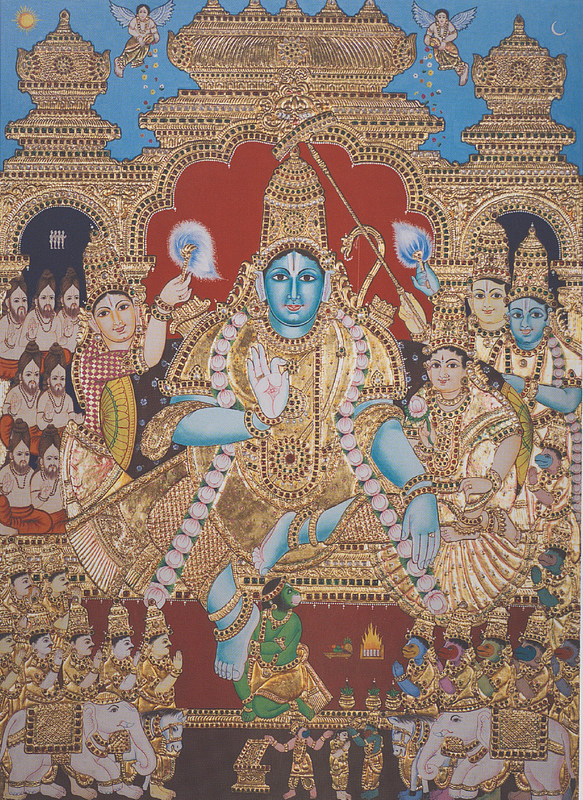 Rama sits on a gold throne in this elaborate painting from Thanjavur, a city in the state of Tamil Nadu, India. After his fourteen years of exile, Rama's coronation was a victory for both the new king and his devoted followers.