Rama was handsome, the rakshasa woman was ugly, he was shapely and slim of waist, she misshapen and potbellied; his eyes were large, hers were beady, his hair was jet black, and hers the color of copper; he always said just the right thing and in a sweet voice, her words were sinister and her voice struck terror.

The story of Ravana, king of the rakshasas, or demons, becomes intertwined with Rama’s because of his wicked sister, Shurpanakha. The female rakshasa comes across Rama in the forest and is instantly smitten with the handsome traveler. She disguises herself as an attractive young woman and attempts to seduce Rama. He does not fall for her trick, so, hurt and embarrassed, Shurpanakha attacks Sita in her true, monstrous form. Rama and Lakshmana fight her off, but a dangerous feud has already begun.

Shurpanakha complains about the incident to her brother. To ensure Ravana’s cooperation in her revenge, she cleverly describes Sita’s beauty in awe-struck detail, which immediately piques the rakshasa king’s interest. He decides that he must have Sita, so he kidnaps her. This crime serves as the inciting event for the remaining drama.

Shurpanakha's expert manipulation of Ravana parallels Manthara’s ability to quickly turn Queen Kaikeyi against Rama. Neither rakshasa nor maidservant had the ability to achieve their dishonorable goals on their own, so they called on powerful allies under false pretenses and played to their weaknesses — Kaikeyi’s desire to maintain her high status and Ravana’s lust. 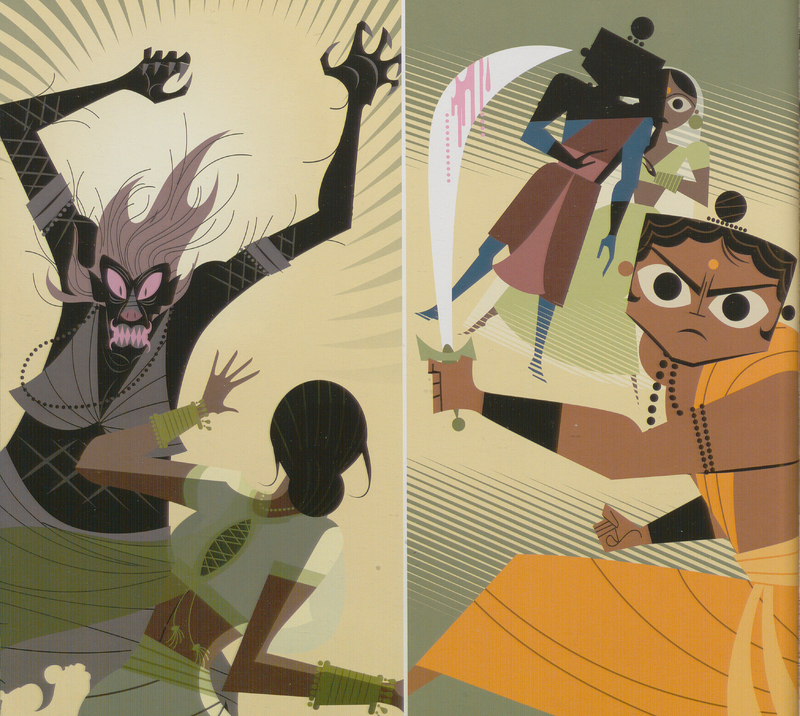 In this illustration from a contemporary children's book, Surpanakha's terrifying true form is in sharp contrast to gentle Sita's innocence and beauty. The second panel depicts blue-skinned Rama standing protectively in front of his wife, while brave Lakshmana fights off the rakshasa.