Literature of the United States

A Literary Map of the United States, 1940

Many literary maps were created for use in the classroom, as this one published by Scholastic would have been. Included are many important works of literature and their authors as well as small illustrations of characters from these stories. Other information that is included are authors’ birthplaces, the supposed location where writer Ambrose Bierce went missing, and several historically significant locations. Insets show more detail to the east coast around New Jersey and Manhattan. The “Rivers of America” Series that is indicated by images of an open book with the abbreviation “R of A” scattered around the map refers to a collection of sixty-five volumes written between 1937 and 1974. These books were written about specific geographical areas mostly by novelists or poets with a connection to the area. 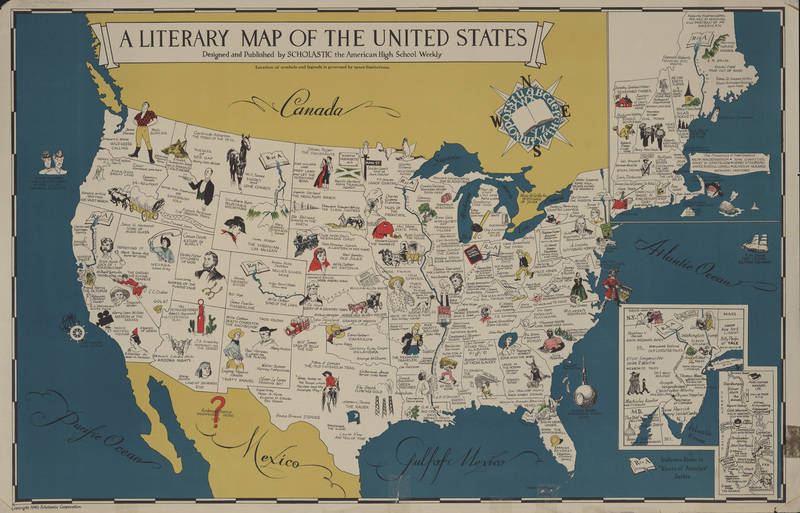 A Literary Map of the United States

A Literary Map of the United States, 1957

This pictorial map includes small illustrations alongside the important works of literature that are plotted on the map. Some of these works are tales of folklore or famous songs and do not include an author, such as Paul Bunyan and "The Arkansas Traveler" (the state song of Arkansas during the mid-twentieth century). 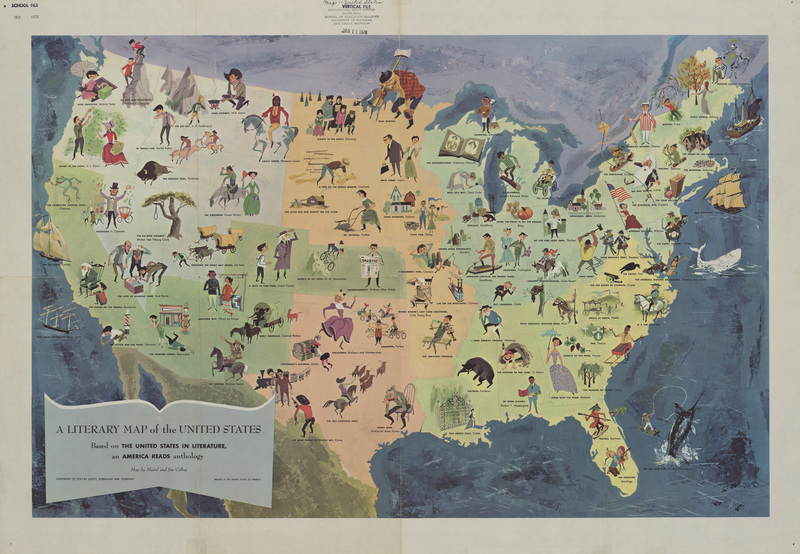 A Literary Map of the United States, 20th century

This map includes at least one novel for each of the forty-eight contiguous states. Each title is accompanied by a small illustration, the author’s name, and a short phrase describing the work. An inset is also included that provides more examples of important works of literature that take place in New England. The accompanying article that appears on the reverse of the map provides more detailed information on the authors and works included categorized by region. 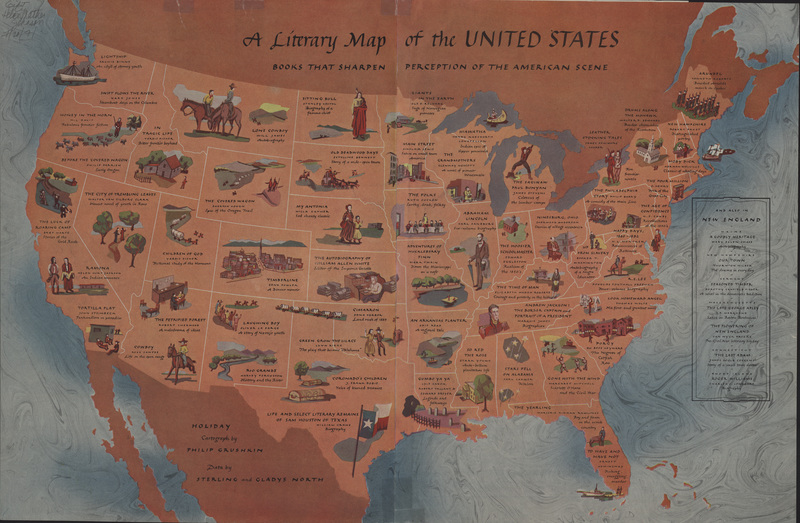 A Literary Map of the United States: Books that Sharpen Perception of the American Scene

This map includes a great deal of text, both on the map itself and in extensive indexes. The last names of American authors paired with their most notable works are plotted in the region where the work takes place. These lists are broken into many categories, such as “The Civil War in Literature,” “The American Revolutionary War in Literature,” and “Revival of Arthurian Legends.” Many authors and writings are also listed by state. Additionally, the map includes information on not only novels, but also patriotic songs, poems, and plays. At the bottom of the map, a chronological listing of American writers by their birth dates is included going back to the sixteenth century. These writers are categorized by the type of writing with which they were primarily associated, including biographer, columnist, essayist, and journalist, among many others. 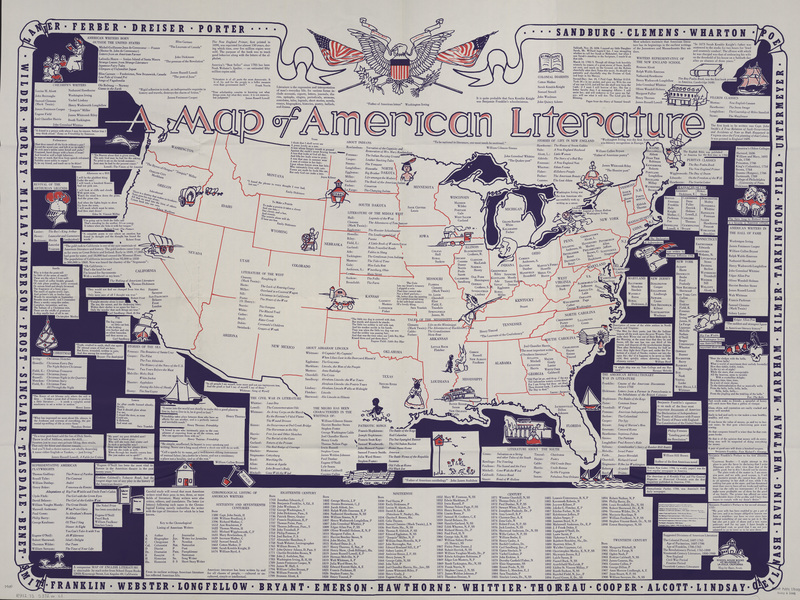 This map, an earlier version of the 1938 Booklovers Map of America from the same publisher, displays a lot of the same information but also includes some information that was not shown on the later map. This map shows some historic locations in addition to purely literary ones, such as the Oregon Trail. Additionally, rather than including text about important literary cities, the map has more insets detailing six geographic locations’ literary landmarks including Chicago, Boston, New York City, and San Francisco. 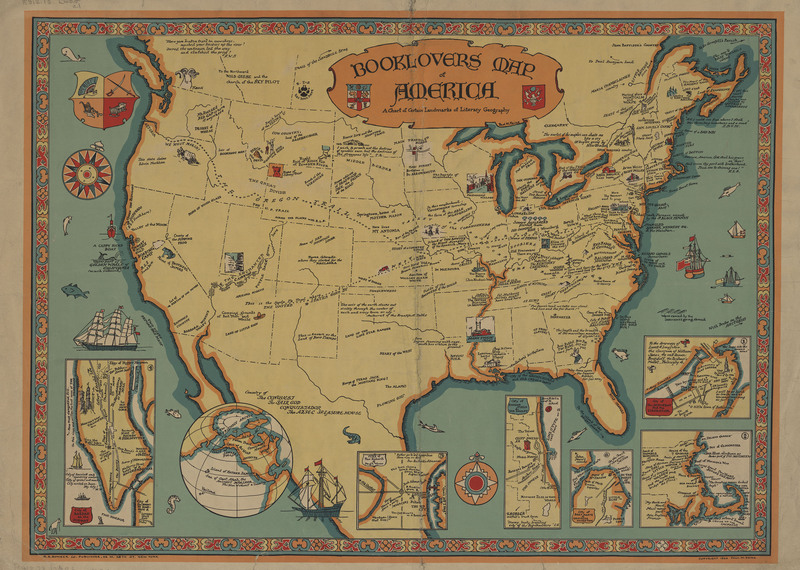 Booklovers Map of America, a Chart of Certain Landmarks of Literary Geography

The Booklovers Map of America highlights the locations of many principal works of American literature. Novels that take place over multiple locations, such as Grapes of Wrath are indicated with a dotted line that maps the itinerary of the story. It also includes the birthplaces and homes of several important writers. Insets around the outside of the map give more information about certain cities with particular literary significance. Also of note is the “Birthplace of American Literature” inset that centers around Boston, Massachusetts. 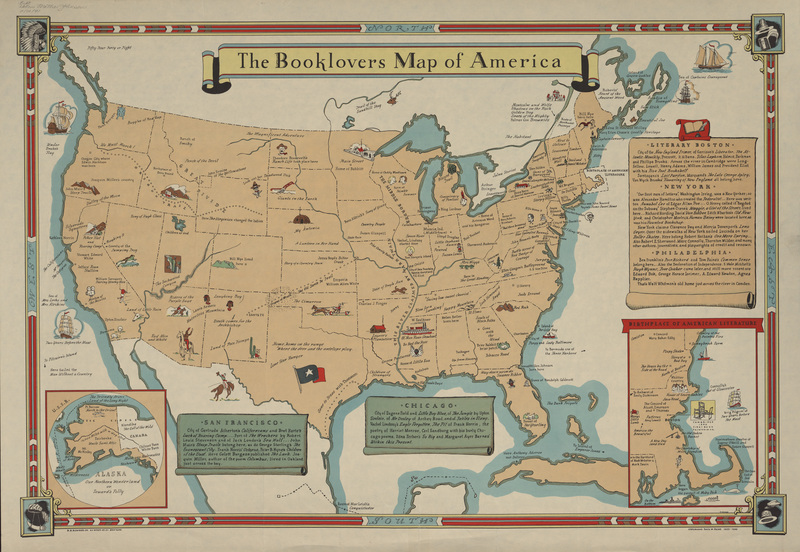 The Booklovers Map of America