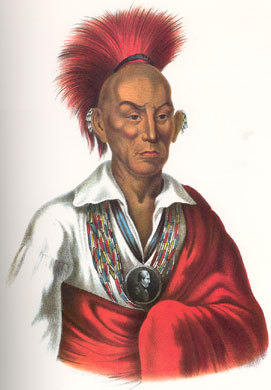 Black Hawk was a war chief and leader of the Sauk tribe in the Midwest of the United States. He was known more for being a war leader, a “captain of his actions” than he was a tribal chief. Black Hawk earned his credentials by leading raids and war parties in his youth. The War of 1812 consisted of the United Kingdom of Great Britain and Ireland against the United States where part of it took place around the Great Lakes area. An undeterred Black Hawk and his group of about 200 warriors were allies for the British, and they fought against the U.S. army. It was Black Hawk’s wish to push white settlers away from his people in the Sauk territory. Saddened by the many lives that were lost due to European attack methods, Black Hawk returned home to Saukenuk.

In the 1804 Treaty of St. Louis, the Sauk and Fox, in exchange for an annual payment of goods, both tribes gave up a stretch of land that started in Missouri through most of Illinois, and part of Wisconsin. Black Hawk resented the treaty saying that the tribal leader who had signed it was not authorized to sign treaties. In 1832, Black Hawk led a loose confedaracy of the Sauks, Meskwakis and Kickapoos known as the “British Band”. These tribes made up about 1500 warriors and non- combative people that crossed the Mississippi River into the state of Illinois from Iowa. The intention of Black Hawk was to peacefully regain and settle on tribal land that had been taken by the United States in the 1804 Treaty of St. Louis. When the British Band tried to return to Iowa, there were a number of battles with opposing forces. The last war fought on the east side of the Mississippi River was called the Black Hawk War. After the war, Black Hawk lived with the Sauk in Iowa, he later died after a two week illness. He was buried on a friend’s farm in Des Moines River, Iowa.

Drake, Benjamin. The great Indian chief of the west: or Life and adventures of Black Hawk. Cincinnati, Applegate & Company, 1854.