History of U-M in Detroit

The Catholepoistemiad, the school that became the University of Michigan, was created in Detroit in 1817. Since 1805, Father Gabriel Richard had been trying to organize primary education within the Territory of Michigan. Governor Lewis Cass appointed territorial judge Augustus Woodward to create the first school system, and Woodward, along with the Reverend John Monteith and Fr. Richard, created the Catholepoistemiad. On August 26, 1817, it was officially established by the territorial legislature and was one of the first publicly funded school systems in the United States. It served the main territorial settlements of Detroit, Frenchtown, Mackinac Island, and Sault Ste. Marie. The first school building was located on Bates Street, between Congress and Larned (see the image below). The new school was based on Napoleon Bonaparte’s newly created University of France, which was organized with the university at the center of a statewide system of primary, secondary and college education. 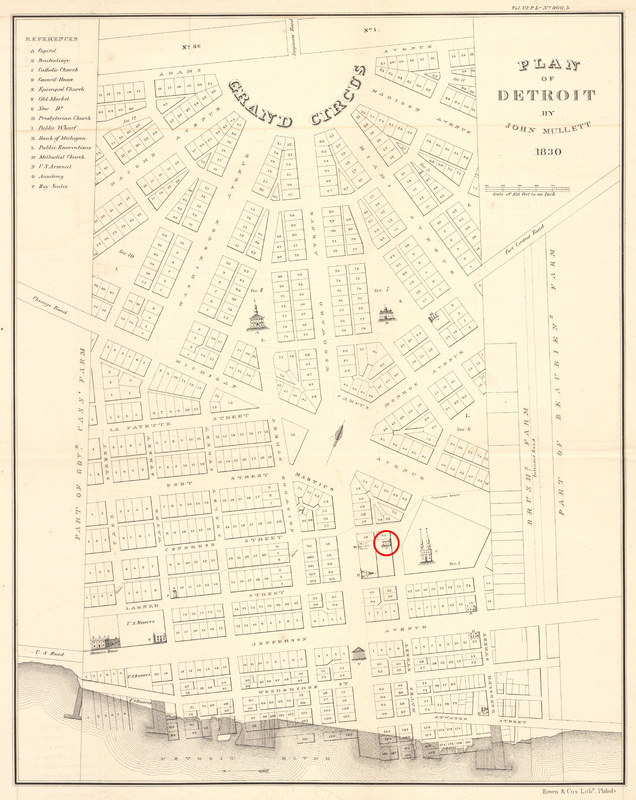 John Mullet drew this plan of Detroit in 1834, and it shows the city as it was in 1830. The original Catholepistemiad building is circled in red. The map gives us a glimpse of the city as it had been rebuilt after being destroyed by fire in 1805.

In that same year, the Treaty of Fort Meigs was signed between the United States and the Ojibwe, Odawa, and Bodewadmi tribes. Under the treaty, 1,920 acres of land were granted by the tribes for the use of the newly established college in Detroit. One of the tribes’ provisions for granting the land in the treaty was the belief that, “they may wish some of their children hereafter educated.” The $5,000 proceeds from the eventual sale of a portion of the land in 1834 were placed in a general fund and were central in the early functioning of the university, including the move to Ann Arbor in 1837. 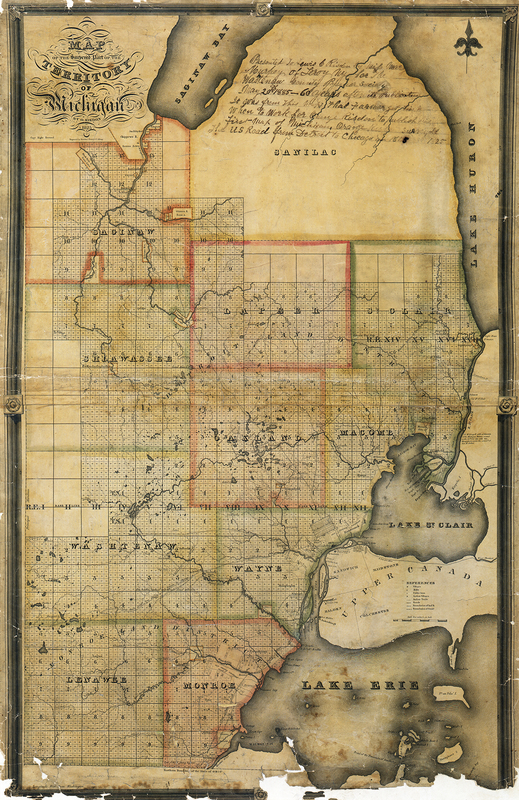 At the time of Catholepistemiad’s founding in 1817, Orange Risdon’s map was the first truly accurate representation of the area. A particularly interesting feature is that it includes the locations of Native villages, trails, and reservations. The map was published just as the Erie Canal opened, which led to explosive growth in Michigan over the next 50 years. The Clark Library’s copy belonged to the map’s creator, Orange Risdon, and includes a manuscript note on the verso, detailing the engraving and printing costs. The map was a major source of information for W.B. Hinsdale’s Archaeological Atlas of Michigan (1931). 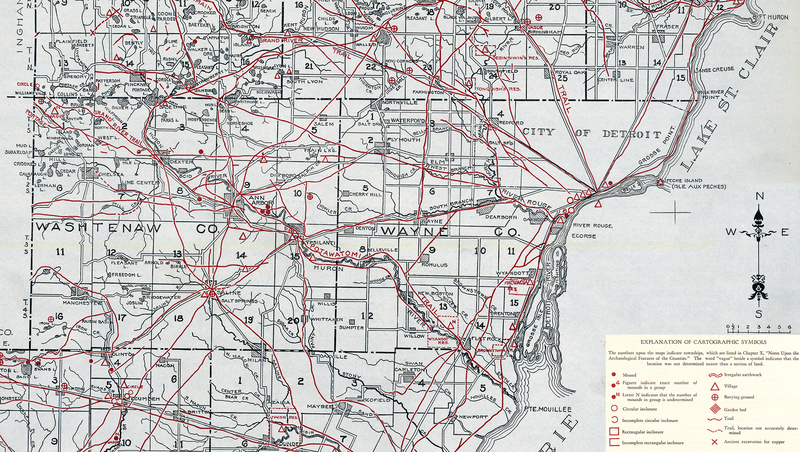 An excerpt from Hinsdale's Archaeological Atlas of Michigan. A portion of the map showing the entirety of Washtenaw and Wayne counties. Note the Native trails marked with red lines, especially the trail which follows the Huron River from Lake Erie and named here as the Potawatomi Trail. It is interesting to see how the modern road system evolved with the Native trail system as its foundation.