"I met Rolando Estévez in 1994 at the Havana Book Fair. This was a time of cataclysmic change in Cuba after the end of the Soviet Period (1961-1989), which ushered in the Special Period (1989). Everything was scarce--food, transportation, and basic necessities like soap. I met Estévez (he uses his last name as his main name) at the entrance of the convention center where the Book Fair was taking place. He had stepped outside to smoke a cigarette and take a break from work at the Ediciones Vigía book stand. We began talking and he showed me some images he had made. He humbly called them "postales" (postcards). They were hand-painted nude figures, bathed in colorful auras, mixed with fragments of lines from poems by Dulce María Loynaz, the great lyric poet who is often described as the Cuban Emily Dickinson. I fell in love with Estévez's work immediately and was thrilled by the harmony he created between image and text. Later I went aside with Estévez and saw the beautiful Ediciones Vigía books that he had designed. These were small editions made out of humble brown kraft paper and each of the two hundred copies of a particular book of poems and stories were handmade into beautiful works of art.

At the time I was writing poems about my re-encounter with Cuba, my native homeland, which I left as a child with my family before I knew what it meant to lose a country. I told Estévez about these poems and he asked me to create Spanish versions so he could read them. Thus began a wonderful collaboration that goes on to this day, of my writing poems in English and Spanish, that found their way to Ediciones Vigía, always in editions designed by Estévez. These poems were always carefully read and edited by Estévez. The books on which we collaborated, and which he designed, include Poemas que vuelven a Cuba/Poems Returned to Cuba; Todo lo que guardé/Everything I Kept, La Cortada, and Broken Streets of My City. More recently, Estévez has chosen to move on and work independently from Ediciones Vigía. He has founded his own independent imprint called El Fortín. I am honored that he has included my poems in a dual edition of three poems by me and three poems by Nancy Morejón in the first book of the imprint, titled Dos Mujeres, Una Isla.

Estévez, who is also a talented poet and writer, shares with me a love of poetry and literature and all the arts. It has been a joy over the years to be able to invite him to the University of Michigan as an Artist in Residency through the Center for World Performance Studies and the Anthropology Department and many other sponsors. As a result of my friendship with Estévez, the University of Michigan was the first American university to obtain copies of the books he designed for Ediciones Vigía. The University of MIchigan is also the first to obtain copies of his first books for his independent imprint El Fortín.

Estévez's lifelong experience working in the theater as a set designer (that is to this day his official job in Cuba, for which he receives a state salary) informs his sense of drama and passion for drama. Over the years his books have become ever more elaborate dramatic productions, where the relation between the cover and the interior is like that of the curtain and the stage, opening up to reveal the mystery hidden inside. His books are often two-dimensional as in the case of the suitcase that opens up on the cover of Todo lo que guardé/Everything I Kept.

On a personal and spiritual level, Estévez is my island counterpart -- I was the girl taken out of Cuba by my parents and he was the boy left behind by his parents when they left in 1969 with his younger sister. He was fifteen at the time and not allowed to leave Cuba because he was considered of military age. When we met, I reminded him of the sister who'd left at the age of eight and never returned. As I told him about the tears I'd shed because my parents didn't want me to travel to Cuba, Estévez nodded sympathetically. He knew in his own flesh the meaning of diaspora, of loss, of how immigration cuts both ways, producing grief for those leaving and those waving goodbye. He had been left behind, I had been taken away: we were each other's mirrors."

Ruth Behar was born in Havana, Cuba, and grew up in New York. She is the Victor Haim Perera Collegiate Professor of Anthropology at the University of Michigan. Among her honors, she is the recipient of a MacArthur “genius” Award, a John Simon Guggenheim Fellowship, and a Distinguished Alumna Award from Wesleyan University. Ruth has worked as an ethnographer in Spain, Mexico, and Cuba, and is known for her humanistic approach to understanding identity, immigration, and the search for home in our global era. She is the faculty-consultant for this exhibition. 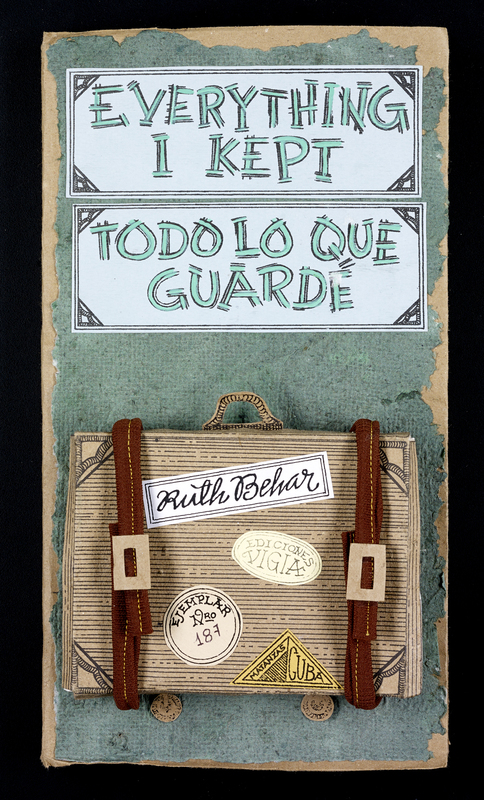