The Black Action Movement (BAM) refers to three different movements on campus between 1970 and 1987 that challenged the university’s policies regarding the recruitment, enrollment, and campus experience of minorities at the University. The four protest movements are often referred to as BAM I, BAM II, BAM III, and #BBUM. Although led primarily by Black student organizations, the protests represented the discontent of many minorities and received participation from many student organizations both Black and non-Black alike. While BAM was certainly not the only student-led movement during this period, it is regarded as one of the most challenging for university administrators and arguably the most influential in shaping the university’s diversity efforts and policies today.

In 1968, University of Michigan students protested the campus climate after the assassination of Martin Luther King, Jr. The Black Action Movement protests began in the fall of 1969. Black student groups, including the Black Student Union, Black Law Student Alliance, Black Student Psychological Association, and the Black Educational Caucus, started talks with the University of Michigan administration about campus climate. 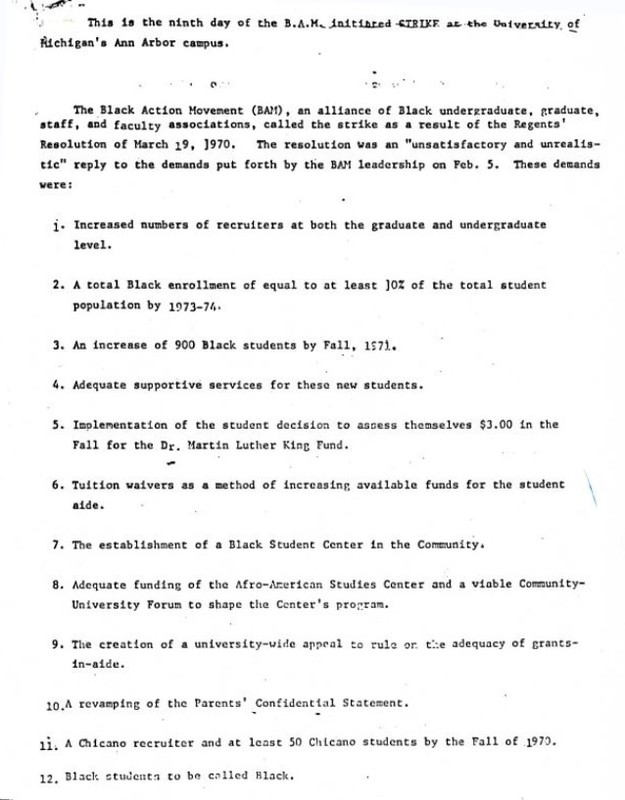 In February 1970, the student protesters of BAM I made twelve demands, pictured above, of the administrators of the University of Michigan-Ann Arbor campus. Some of the demands included:

The students went on strike for 18 days. In an article in the Ann Arbor Chronicle on March 30, 2010 titled “Open It Up or Shut It Down,” Alan Glenn observed that the strike led to a 75% decrease in class attendance. 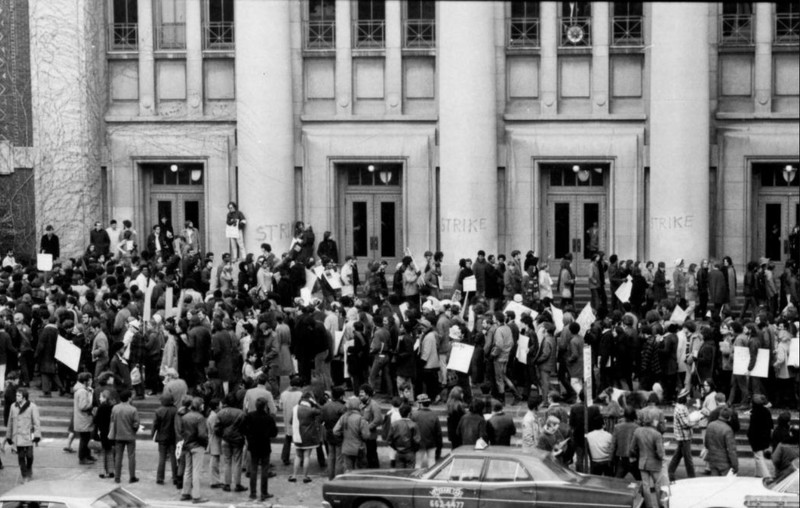 Gathering on the steps of Angell Hall after a meeting, in the picture above, students raised their fists in solidarity and in protest after voting to go on strike until their demands were met.

In addition to picketing classroom buildings, students set up picket lines at dormitories and other university buildings. 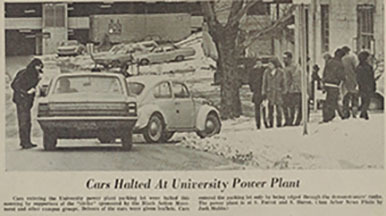 Lining around the block, cars in the image above wait while students block the street. As the protests continued they started having an effect on the operations of the University. Alan Glenn reported on how after President Fleming and the Regents refused to respond to the demands, about 25 protesters went to the Undergraduate Library and took hundreds of books off the shelves, forcing the building to close. The next morning BAM protesters met at the University administration building to demand action. President Fleming and the Regents once again refused, and a larger group of students went back to the library and disarranged thousands of books. Fleming responded by stationing Ann Arbor police officers at the University libraries. Over the next few weeks, more disruptions occurred including a blockade of the Michigan Union snack bar. Early in March, President Fleming announced an alternative proposal.

On April 1, 1970 the University responded to the students’ demands and the strike was settled.

Pictured above is a section of the minutes from the March 1970 Regents meeting stating the University’s response to the original twelve demands of BAM I. Of the twelve demands, the University accepted the 10% demand, the continued support of the Afro-American Studies Program, and the creation of a Black Culture Center.

In 1975, students of color, once again feeling disillusioned by the lack of investment and commitment by the University of Michigan, protested. During February of 1975, for three days, nearly 300 students held a sit-in on the second floor of the Administration Building that contained the President’s Office. The three main reasons for the Black Action Movement’s second action were the lack of progress on implementing the demands of BAM I, in particular, the 10% enrollment of Black students; the expulsion of a Black nursing student without a hearing; and the rejection of a candidate for the dean of College of Literature, Sciences, and the Arts (LSA). Many people found BAM II to be a more mild protest than the earlier BAM I protest. In the Michigan Daily article “Sit-in ‘75: Ain’t the Old Days," David Weinberg interviewed university assistants and secretaries who remarked that BAM I felt more hostile and “threatening” while the BAM II sit-in felt more organized with “legitimate” concerns. During the sit-in, students created a list of demands to the university administration. 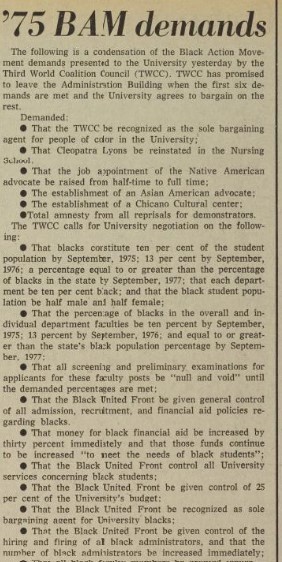 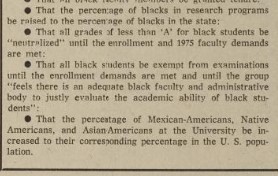 In these news clippings, pictured above from the February 19, 1975 issue of the Michigan Daily, the Black Action Movement II Demands are presented in two bulleted lists. The demands are transcribed from the newspaper below:

The Third World Coalition Council calls for University negotiation on the following:

University administrators met with the protestors to hear their concerns as they occupied the second floor of the Administration building. 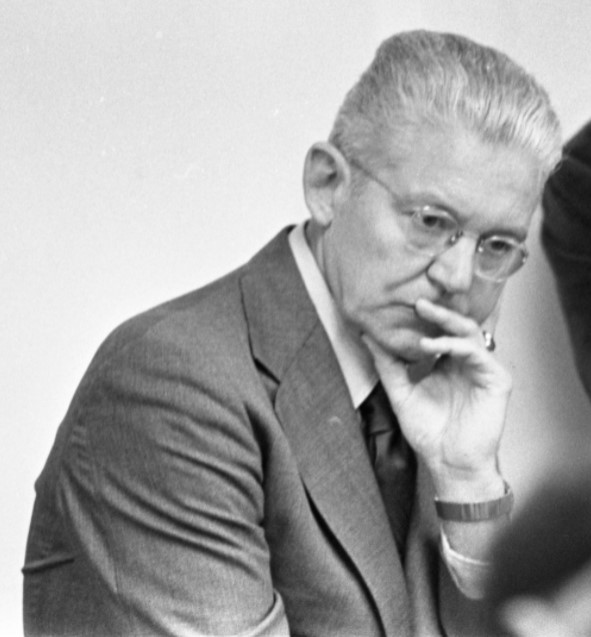 Intently listening, University of Michigan president, Robben Fleming, sits with the student protesters to hear their concerns in the photograph above. After the three day sit-in, a group of representatives of Black, Chicano, Asian-American, and Native-American student groups presented six demands.

After the meeting, President Fleming released a statement to the BAM II’s concerns and demands, outlining his commitment to provide student services and financial support to students of color at the University of Michigan. The statement also promised continuing discussions with the Third World Coalition Council with the first meeting scheduled for four days after the statement was published. Furthermore, Fleming guaranteed that the students who took part in the sit-in would not face any punishment or criminal charges for occupying the Administration Building. The sit-in ended after President Fleming shared his statement.

Seventeen years after BAM I, students were once again protesting the slow progress of the university in meeting their demands. The Black Action Movement III (BAM III) protests centered around four issues: 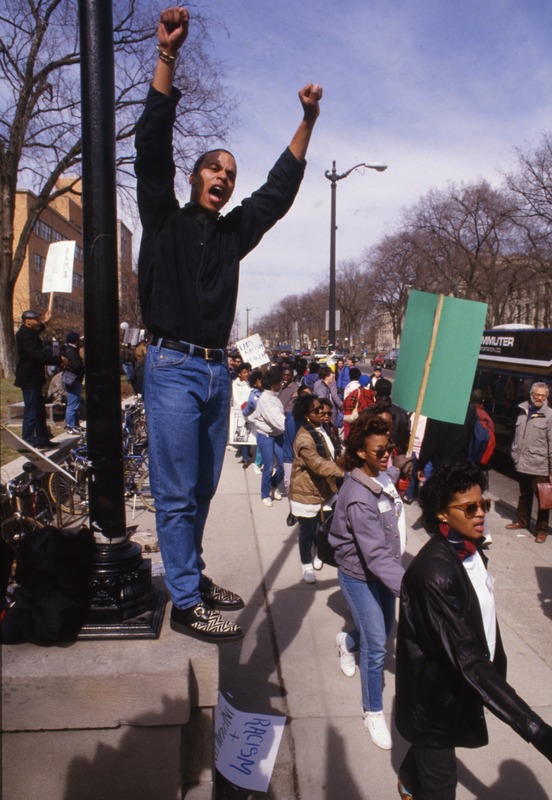 “Student Protestor Carries Sign.” March 18, 1987. While this photo never appeared in the Ann Arbor News, it was taken by an Ann Arbor News photographer of the BAM III protest in 1987.

During BAM III, there were two groups making demands on the University administration, the United Coalition Against Racism (UCAR), and BAM III. BAM III’s demands included the following:

In 1987, the University of Michigan administrators, all of whom had been hired after the original BAM I protests, found the protest to be a nuisance and largely ignored it. However the protest gained momentum with national news coverage and the administration was forced to respond to the demands of the protesters. But by March 19th, President Shapiro had met only one demand from UCAR: an honorary degree for Nelson Mandela. The BAM III’s demands went unaddressed.

Leaders of the Black Action Movement III were impatient and angry with President Shapiro's response to their demands. Finding it difficult to get the university administration attention, BAM III protesters interrupted a meeting between the University of Michigan president and regents.

President Shapiro resigned the next month to become president of Princeton University.

In November 2013, the Black Student Union launched #BBUM — a Twitter hashtag that stood for “Being Black at the University of Michigan.” The students asked other Black students to go onto Twitter and testify about their experiences on campus. The Twitter campaign gained national attention. Many of the tweets sounded like they could have come from Black students in the 1960s, 1970s, 1980s, and 1990s; it seemed like nothing had changed. Students carried protest signs that quoted the tweets to demonstrations. 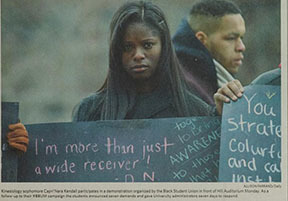 In the image above, student Capri'Nara Kendall carries a sign at a demonstration in front of Hill Auditorium that reads “I’m more than just a wide receiver.” The demonstrations and the hashtag demonstrated how little had changed for students of color at the University of Michigan. Out of this movement, #BBUM provided a list of seven demands:

Many of these demands, like those calling for representation, financial support for Black students, and a safe, inclusive space for students of color, echoed and reverberated the demands of BAM I, II, and III.