Wovoka was a Numu seer, holy man and prophet of the 1890 Ghost Dance movement. Ghost Dance movements have occurred in history as a rallying point to preserve traditional Native American culture and as a form of resistance to U.S. policy and American culture. Born somewhere between 1856 and 1863, Quoitze Ow was Wovoka’s birth name. From about age 8 on, Wovoka worked on the Mason Valley ranch of David and Abigail Wilson. He became more commonly known by the name Jack Wilson after working on the Wilson’s ranch for years. Growing up with shaman and prophecy traditions, it was in the company of the Wilsons where Wovoka was exposed to Christian theology. Wovoka was trained as a “weather doctor” following in his father’s footsteps. He was also known through Mason Valley as a spiritual leader.

On New Year’s Day 1889, during a solar eclipse, Wovoka had a vision. He related traveling to heaven and meeting God. His vision predicted the rise of Paiute dead and the removal of whites in their entirety from North America. In order to bring this prophecy to pass Native Americans needed to live righteously, create cross cultural relations with other Nations and perform a traditional round dance - The Ghost Dance. This religious movement came to be incorporated into a number of Native American belief systems. Wovoka’s messages included teachings of nonviolence, but due to the troubled history between Native Americans and whites settlers, the performance of the Ghost Dance was not received as peaceful by non-Natives. The massacre at Wounded Knee in Dec 1890 brought an end to the public practice of the Ghost Dance, instead it went underground. Wovoka remained a spiritual leader and healer until his death in 1932.

Hittman, Michael, and Don Lynch. Wovoka and the Ghost Dance. Lincoln:U of Nebraska, 1997. 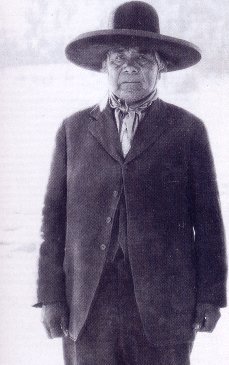