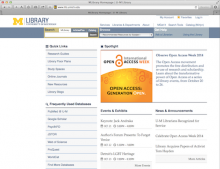 Does adding links to popular databases change user searching behavior? An October 2013 change to the University of Michigan Library’s front page gave us the opportunity to conduct an empirical study and shows that user behavior has changed since the new front page design was launched.

Database Names are Hard to Learn 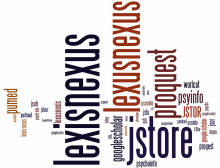 More than 15% of user searches for the seven most commonly used databases on the University of Michigan Library’s website were misspellings of the database name. We looked through our search logs for the three months spanning January 1-April 2, 2014, to find correct and likely incorrect search queries. 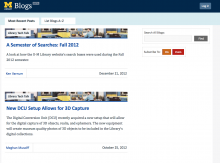 The University Library has a new blogging platform to which most U-M Library blogs will gradually move over the coming months. The new blogging platform (on which this post was published!) is built in Drupal with an accessible, responsive design. It is designed to bring together the library’s many blogs into one convenient location.

A look at how the U-M Library website's search boxes were used during the Fall 2012 semester.

Over the past months, a team of library staff comprising the MLibrary Favorites Working Group (Albert Bertram, Sigrid Cordell, Jonathan Rothman, Sonu Mishra, and Ken Varnum), together with Bill Dueber from Library Systems, have been working on an improved Favorites tool for the library web site.

Since February 2008, the University Library has offered a service called "MTagger" as a way to allow site visitors to save resources for future use. Usage patterns over the four years that MTagger was part of our web site show a clear preference for "favoriting" items rather than tagging them. In fall 2011, the library launched "Search Tools Favorites," a way for authenticated library web site users to save databases and online journals.