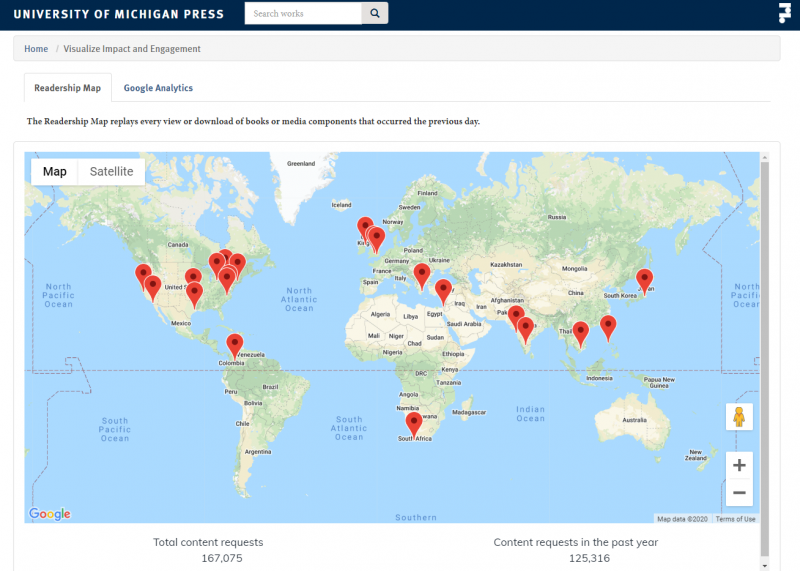 Between March 20 and August 31, 2020, the University of Michigan Press made all the titles in the Library-hosted ebook collection, UMP EBC, free-to-read. This was in response to the sudden restriction of physical movement and building access due to COVID-19 pandemic “lockdowns” across the world. Because they came with little warning, these restrictions left many faculty, students, and librarians struggling to maintain continuity of research and learning. The removal of access barriers was decided upon with support from Library leadership and the Press’s faculty Executive Committee on March 18, around two days after the Publishing division’s staff vacated their office spaces and moved to 100% remote working -- a situation still in place at the end of the calendar year. The reimposition of access restrictions on UMP EBC at the end of August was a reluctant move. However, as a business that relies on sales revenue to sustain at least 70% of its budget, U-M Press could not afford to maintain free access indefinitely and September starts the sales season for ebook collections sold to libraries.

Even though the immediate benefit for users of free-to-read content ended in September, we have been eager to learn from the data we gathered in order to shape our future business strategy. With this in mind, the Press did several studies of the impact of free-to-read. (Note that “free-to-read” means that all titles were available on UMP EBC for anyone to read without charge, but only users within the IP ranges of library purchasers of the collection were able to download books.) Three different studies are described below.

With the generous pro bono help of the IP Registry (the global IP address database for libraries and publishers), we analyzed weblogs from UMP EBC for the first period of free-to-read availability, March 20 to the end of June 2020, to try and understand the pattern of “logged” and “anonymous” use. Logged use is traffic that can be recognized as coming from a static IP address and thus connected to an institution or an organization. Anonymous use is traffic that cannot be associated with a static IP address, although the protocols managed by IANA can allow the association of this traffic with, for example, a particular country.

The proprietary Google Data Studio reporting implemented on the UMP EBC home page (see “Visualize Impact and Engagement”) provides a similar, but less detailed, message to the IP Registry analysis. The attractive Google impact map (designed by Albert Bertram in Library Information Technology) which we implemented on the site provided a daily snapshot of the spread of use.

Please make more materials open-access. It would help world scholarship a lot. I am from the Philippines and much of our research would be better informed if we had access to more materials. Thanks.

During the period of the free-to-read initiative, we conducted several surveys with key stakeholders to get a sense of their reactions to the initiative.

Despite the limited term of free-to-read ebooks, University of Michigan Press learned a lot from the experience. Many other scholarly publishers who undertook similar initiatives are also studying what they learned and the results are starting to be released informally through conference presentations. Project Muse, for example, provided free access to over 25,000 books from 70 publishers over the summer. The Director of Johns Hopkins University Press, which runs Project Muse, has reported similar results to ours. JSTOR has also resulted similar results from its program.

The bottom line is that if a press is able to make its books freely available in ebook form, untapped global demand for the sorts of scholarship university presses publish emerges that is entirely at odds with the popular perception that monographs “are books that do not get read.” We’ve learned this not only from statistics (that could be clouded by the activities of digital bots and spiders), but also from the feedback collected from real individual users whose gratitude for access is not only moving but inspiring — to us as a publisher and to the authors who have written their books with the expectation that they will be read but rarely get such direct feedback.

The results have suggested several actions that the Press is now taking: